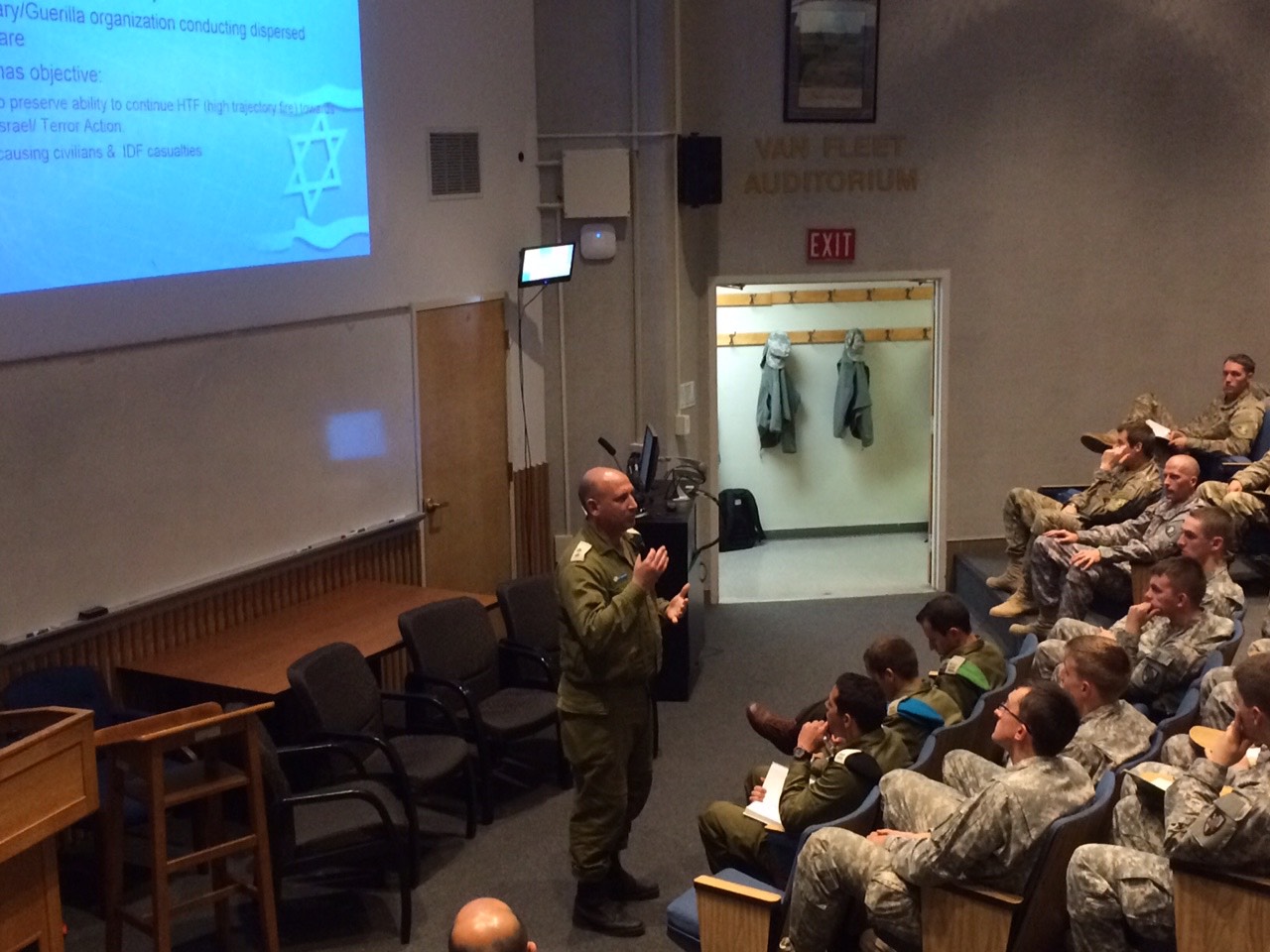 On Monday, 19 OCT, the Modern War Institute hosted a War Council Panel with four officers from the Israeli Defense Forces (IDF). The group included LTC Mattan (an instructor at the Israeli Tactical Academy), CPT Doran, LT Omri, and LT Harrel (three current students at the Israeli Tactical Academy). The IDF officers discussed the IDF in general as well as some of their experiences during the 2014 Israel-Gaza conflict known as Operation Protective Edge (OPE). The event was well attended with approximately 65 cadets, staff, and faculty in attendance.

The panelists started the discussion by highlighting some of the primary differences between the IDF and the US Military, one being that the Israel utilizes a conscript force.  All able bodied young Israeli men are required to serve a three year service obligation to the IDF.  Young women are required to serve two years.  Another key difference of the IDF from the US is that they are in a constant state of impending conflict because of their geographical location.  Surrounded by unfriendly neighbors, including terrorist groups like Hamas and Hezbollah, Israel needs to remain at a heightened state of security at all times.  The takeaway from these two differences is that the IDF service member can remain confident that there will be some type of conflict during their short two or three years of compulsory service.

An area that both the US Military and the IDF have in common is the restrictive nature of warfare in urban areas, due to rules of engagement, and attempting to minimize collateral damage in dense populations.  Terrorist enemies on the other hand do not share these restrictions, and use that to their advantage. Not only are offensive military actions more restrictive, but it is also extremely difficult to recognize enemy fighters among the civilian population.  Terrorist groups often use this type of concealment to go unnoticed until they initiate an attack at their time and place of choosing.

The IDF panelists also discussed some highlights of OPE, an initiative to stop rocket fire from Gaza into Israel, as well as to seek and destroy tunnel systems that were used by Hamas to infiltrate the border.  They explained in detail the impressive infrastructure of these tunnels, and how Hamas builds them in a complex way that makes discovery quite challenging.  In addition to the complexity, the tunnels are nearly 100 feet below the ground, a factor that makes them much more difficult to identify and destroy.

A parting word from the panel was the importance of strong confident leaders at the platoon through battalion levels.  They stressed that these leaders needed to show stamina to be able, “to go the distance,” not just for the battle at hand.  This is a takeaway that applies not only to the IDF, but US leaders as well, as we remain committed to combatting those that would do us harm.