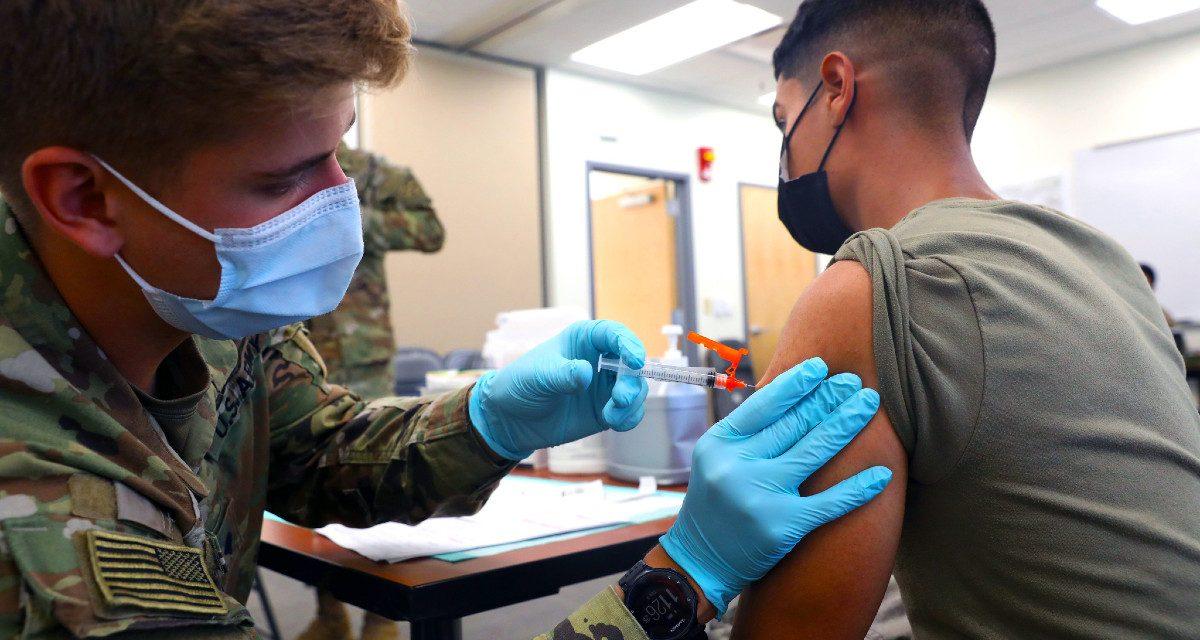 From the Pilgrims and Puritans that fled England to follow the religious dictates of their consciences to the Bill of Rights that enshrines freedom of religion in the US Constitution, religious liberty is at the heart of the American ethos. The Department of Defense has further established policy to accommodate the “individual expressions of sincerely held beliefs (conscience, moral principles, or religious beliefs), which do not have an adverse impact on military readiness, unit cohesion, good order and discipline, or health and safety.” However, there is a growing perception that DoD is too dismissive of service members’ sincerely held religious beliefs—especially since it has become a central issue surrounding vaccination against COVID-19. Federal judges in Texas, Florida, and Georgia have issued injunctions against the military for seemingly discriminating against service members’ religious vaccine exemption requests. The Texas case has recently been granted class-action status for 4,095 Navy religious exemption requests. Additionally, in a statement on the COVID-19 vaccine, the Roman Catholic Archbishop for the Military Services opined, “The denial of religious accommodations, or punitive or adverse personnel actions taken against those who raise earnest, conscience-based objections, would be contrary to federal law and morally reprehensible.” None of this looks favorably on a military that has been losing the trust and confidence of the American people.

I am a vaccinated Army chaplain and since DoD announced its COVID-19 vaccination mandate, much of my mission has involved the processing and tracking of religious exemption requests. I have reviewed over three hundred such packets, proofread and provided feedback on scores of chaplain interview memos, and personally conducted such interviews for junior enlisted through field-grade officers. That experience has reinforced two overarching observations that, although mostly focused on the Army, I believe should be reflected in ongoing discussions about DoD’s response to the COVID-19 pandemic and its commitment to accommodate service members’ religious beliefs.

Religious exemptions to vaccination requirements are not requested because the vaccine keeps soldiers from attending worship services, reading sacred scripture, or offering prayers. Rather the burden is to a service member’s conscience, which is explicitly covered under DoD policy (“conscience, moral principles, or religious beliefs”). Sincerely held religious beliefs are often at the core of a soldier’s identity and are tied to two of the five domains of holistic health and fitness: spiritual readiness and mental readiness. Spiritual Readiness includes personal qualities that “come from religious, philosophical, or human values and form the basis for character, disposition, decision making, and integrity.” Character is defined in the doctrinal manual as part of mental readiness—a soldier’s “true nature including identity, sense of purpose, values, virtues, morals, and conscience.” Simply put, religion informs character. Character includes conscience. Violating conscience leads to a conflicted soul. In extreme cases this can result in moral injury and render a soldier combat ineffective. General George C. Marshall, chief of staff of the Army during World War II and later secretary of state and secretary of defense, foreshadowed the relevance of this perspective in his 1941 speech at Trinity College. “The soldier’s heart, the soldier’s spirit, the soldier’s soul, are everything,” he said. “Unless the soldier’s soul sustains him, he cannot be relied on and will fail himself and his commander and his country in the end.” For less than 1 percent of our active duty soldiers, receiving a COVID-19 vaccination is a burden to their consciences that forces them to choose between military service and their sincerely held religious beliefs. Consider these examples from actual exemption requests:

These are just a sample of the thoughtfully expressed and sincerely held beliefs that underwrite many of the vaccination exemption requests I have personally seen. Other requests came from soldiers with commendable service records—soldiers who have served multiple combat deployments and who have earned Combat Action Badges and Purple Hearts. Their spirituality and their admirable service are not one and the same, but neither can they necessarily be separated.

Finally, the Army is a values-based organization that finds strength in diversity, and this diversity extends to religious matters of conscience. The COVID-19 vaccine mandate presents an opportunity to affirm the Army’s commitment to soldiers’ religious liberty and spiritual readiness.

The Army may recognize the importance of a soldier’s conscience and sincerely held religious beliefs, but these alone do not warrant a religious exemption. Commanders must balance the soldier’s request against military necessity, including such factors as risk to mission and risk to the force. This is the burden of command where it is understood that each decision can have cascading effects. The good news is the battlefield has changed. Our commanders have successfully navigated through the worst of the pandemic. The COVID-19 of 2022 is not the same virus of 2020. The virus is weaker and our defenses are stronger. The vaccine mandate accomplished its purpose to protect the force with 98 percent of active duty soldiers now vaccinated. On today’s COVID-19 battlefield, neither the volume of religious exemption requests nor the actual threat from a service member contracting COVID-19 poses such a risk to readiness as to require a soldier to violate his or her sincerely held religious beliefs.

The Army reports only 3,760 (0.77 percent) of its 486,500 active duty soldiers have requested a religious exemption to the vaccine. Even if all 3,760 were approved, on average a battalion of one thousand soldiers would only have seven personnel religiously exempt from the vaccine. So few being granted an exception to policy poses minimal threat to that unit’s readiness, especially when weighed comprehensively and accounting for the potential impact to individuals’ spiritual and mental readiness—again, two of the five fitness domains specified in the Army’s holistic health and fitness doctrine. On the contrary, approving those requests would affirm the Army’s People First priority.

Furthermore, after two years of the pandemic it is likely many unvaccinated soldiers have some level of immunity from a previous infection. Whether or not natural immunity is more effective than vaccinated immunity (or vice versa), it should be indisputable that a prior COVID-19 infection grants a degree of protection and therefore decreases any risk the unvaccinated might pose. As understanding of COVID-19 and natural immunity continues to evolve, it would not be surprising if DoD policy reverted back to the standing regulation that included a medical exemption for “evidence of immunity” based on “documented infection.”

Contrary to popular belief, immunization status does not make a soldier nondeployable. Rather, the soldier is coded as Medical Readiness Category (MRC) 2 and is still deemed deployable in accordance with existing regulation. That fact is explicitly stated in the order mandating soldiers receive the COVID-19 vaccine. Should a deployment arise for an unvaccinated soldier, the decision can be made based on that specific mission whether the soldier goes forward or not. If the mission does not require vaccination, the soldier will deploy. If it does, that soldier will support the unit as part of the rear detachment. The Army routinely does this for other circumstances ranging from diabetes or physical profile limitations to attendance at professional military education courses.

Far from being a grave risk to the military, the risk from a service member contracting COVID-19 is minimal. Statistically, service members are neither dying nor getting seriously ill from COVID-19 in any of its variant forms. In 2020 and 2021, DoD reported thirty-one COVID-19-related deaths in its active component out of 228,661 infections—a resulting 0.01 percent fatality rate. To put that figure in perspective, the COVID-19 fatality rate for the general US population is ninety-one times higher than it is for active duty military personnel. Across all components, the hospitalization rate for the military due to a COVID-19 infection is only 0.66 percent. This includes all of 2020, when neither a vaccine nor proven treatment options existed, and all of 2021, which saw the more contagious Delta variant spread.

Similarly, the current COVID-19 variants are even less severe. Of the 1,117,273 active cases of COVID-19 in the United States on April 19, 2022, only 1,438 (0.13 percent) are considered “serious” or “critical.” This includes the civilian population with all of its age ranges, comorbidities, and less than 67 percent fully vaccinated rate. One can assume the generally younger, healthier, and 98 percent vaccinated active duty military population is faring even better.

Each religious exemption case is unique and distinct factors should be considered accordingly. These factors could include the vaccination status of the larger military community, including family members and retirees, or the impact the vaccination status has with the host nation for soldiers based outside of the United States. In general, this combination of already highly vaccinated service members (98 percent); infection survivability (99.99 percent), and nominal infection severity (99.9 percent experiencing only mild symptoms) suggests the risk posed by COVID-19 to the active duty military can be kept to an extraordinarily (and acceptably) low level. Improved therapeutics and reduced threat of current variants further minimize risk to mission and risk to force. With less than 1 percent of the active duty Army requesting a religious vaccination exemption, even the cumulative impact of granting multiple accommodations is negligible.

Collectively COVID-19 has had a momentous impact on all aspects of our lives. The negative impact is compounded for those requesting an administrative exemption for their sincerely held religious beliefs—deep matters of conscience—as the vaccination mandate forces them to choose between their faith and their military service. We are too noble of a nation and an institution to unnecessarily violate their consciences. The COVID-vaccine mandate has been successful in getting 98 percent of the force already vaccinated. Although the Army surgeon general has approved only a handful of religious exemptions to date, Secretary of the Army Christine Wormuth has suggested there will be a “fairly small number of people who are not granted exemptions.” That is encouraging. The Department of the Army can grant religious exemptions to the vaccine mandate without compromising military readiness. The mandate has achieved its purpose remarkably well—an achievement that is not put at risk by the small number of religious exemption requests.

Sincere religious exemption requests can and should be accommodated. This is in accordance with existing policy and, equally important, is the hallmark of a force that respects its individual members’ core beliefs, recognizes the fundamental importance of one’s moral compass, and strives to sustain its commitment to its own most foundational values.

Chaplain (Major) Paul Tolbert is married to an emergency room healthcare provider and is a father of three sons. He is a graduate of the US Army Command and General Staff College and holds degrees in mathematics and historical theology from the University of Mobile, Duke University, and Campbell University.