A Tale of Two Bears: Russian Experience in Syria and Ukraine 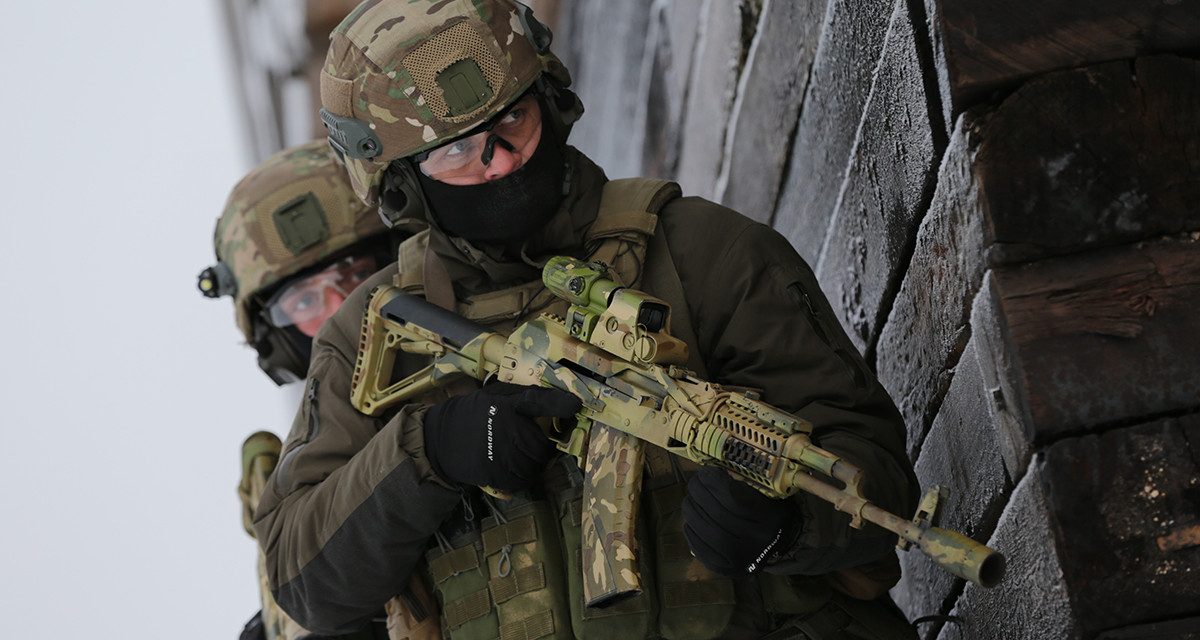 Over the opening phase of their invasion of Ukraine, Russian forces have struggled to achieve their most ambitious objectives. In the face of spirited Ukrainian resistance, the Russian advance has slowed, and losses of men and equipment have been substantial, even if hotly debated. Russia’s difficulties have surprised some Western observers, who expected a rapid victory. Russian malaise is even more surprising considering recent experience in Syria, where Russian forces demonstrated efficient use of drones and tailored force structure—elements they have failed to effectively implement in Ukraine thus far.

Although Russian forces have yet to subdue the Ukrainian military, in certain areas of the country, such as the southern front and recently occupied portions of the Donbas, Ukrainian resistance forces may soon face Russian counter–irregular warfare (CIW) capabilities honed over the past decade in Syria. The current conflict remains predominantly a conventional fight, with the Russian military focused on defeating the uniformed Ukrainian military. The last time Russia faced a comparable foe was the 2008 Georgian campaign, which also exposed deep flaws within the military. However, as Russian forces attempt to secure their rear areas and consolidate control of territorial gains, they will likely increasingly employ CIW methods.

Understanding how Russia employed CIW in Syria can give a fuller picture of potential Russian capabilities and illuminate the challenges faced by a future Ukrainian insurgency in occupied zones. For US practitioners, as Russia once again proves itself to be an enduring security challenge for the West, understanding the methods Russia has used successfully in the past to defeat formidable irregular opponents is more important than ever.

Those Who Can, Advise

Russian operations in Syria leaned heavily on an advise-assist-accompany model incorporating operators from the Russian Special Operations Forces Command (KSSO). Although no strangers to using indigenous forces, the Russian military has often left relationships with those forces to the Russian intelligence services. Spetsnaz (special assignment forces) have focused instead on direct action and reconnaissance missions. In Syria, however, KSSO troops demonstrated an ability to advise and augment indigenous formations. The Russian CIW model now includes a viable foreign internal defense capability. After the fall of Aleppo in 2016, KSSO elements augmented Syrian Arab forces with reconnaissance and airstrikes, and led trainees on raids in Recondo-style live-fire exercises. Although the bulk of Russian forces in Ukraine remain focused on large-scale combat operations, the incorporation of Chechen forces and Donetsk People’s Republic units in the southern offensive against Mariupol could portend a similar approach if these regions are occupied for the long term.

The Russian force composition in Syria reflected lessons learned from operations in the North Caucasus and Africa. Whereas previous CIW operations used traditional Russian divisions executing conventional warfare writ small, the Russian expeditionary force in Syria employed military police units composed of deliberately recruited Muslim servicemen to secure humanitarian convoys, escort journalists onto the battlefield, and prevent sectarian violence by patrolling recently pacified regions in the country. The Russian military police concept is theoretically an adoption of American equivalents during the mid-2000s, but the Russians have expanded their military policemen as a staple of stability operations. In occupied Kherson, this has manifested in an overt reliance on Rozgvardia forces to oppose initial civil resistance.

In Syria, Russia also shifted its force structure to emulate aspects of the Western concept of population-centric counterinsurgency. As early as the siege of Aleppo, the Russian Reconciliation Center was involved in implementing an overtly conciliatory approach to separatist Syrian forces. Units from the Russian expeditionary forces executed what Western practitioners would identify as civil affairs operations. Delivering humanitarian aid, establishing field hospitals for wounded civilians, and negotiating neighborhood-level ceasefires became part of the Russian CIW strategy in Syria. Although the idea of a population-centric CIW effort seems hard to imagine when Russian forces are deliberately bombing medical infrastructure throughout Ukraine, Russian tactics were equally brutal in Syria. Similar civil affairs operations along the model of the reconciliation centers may emerge in occupied zones in Ukraine over the months to come.

Dogs of War on the Russian Leash

In addition to an indigenous approach and the incorporation of stability-focused units, the Russian integration of private military companies (PMCs) in Syria yielded an arguable success. Somewhat counterintuitively to Western observers, even the 2018 killing of several hundred Syrian government and Wagner Group fighters by US forces in Deir ez-Zor province bolstered the utility of PMCs to Russia. After the dust had settled, Russia had lost a significant number of fighters in direct confrontation with little backlash or media coverage at home. Given the current Russian information campaign to limit domestic blowback, recent recruiting drives for Wagner and its affiliates are not surprising. While Wagner Group mercenaries may have mothers, they do not carry the same cultural and historical weight as the Soldiers’ Mothers Committee.

Syria was a live-fire proving ground for new Russian technology, specifically drones and integrated mission command systems. Russian unmanned aerial vehicles (UAVs) flew tens of thousands of sorties against anti-Assad forces and provided increased intelligence, surveillance, and reconnaissance to ground elements. During the drive to Aleppo in 2015, Russian drones enabled Syrian Tiger Force columns to quickly clear large portions of the city while protecting their flanks from ambushes. The Russian UAV fleet in Syria also provided aerial observation for airstrikes and artillery. Russian drones were used to shorten the kill chain by finding and fixing enemy forces, and for laser designating targets for precision strike. Although Russian drone integration in Ukraine has been noticeably absent during the first weeks of the conflict, reports of loitering munitions have increased in recent days. In occupied areas of Ukraine, drones will likely be used increasingly to target resistance elements.

Much like PMCs, drones provoke limited to no response from the Russian public when lost, and have been described as indispensable to military conflict by Defense Minister Sergei Shoigu. Russia has thus far fallen short of its goal to integrate strike-capable drones, a priority during operations in Syria. Russia’s Orion drone platform executed a lukewarm kinetic debut in Ukraine striking military infrastructure. However, the prioritization of drones within the Russian Ministry of Defense, combined with the significant role they have played for Russian enemies in both Syria and Ukraine, will likely make them a fixture of the battlefield in the coming months.

Another new piece of technology debuted en masse in Syria was the Russian Strelets system. A command-and-control system similar to the Android Tactical Assault Kit in the US military, Strelets represents a milestone improvement in the Russian ability to track friendly forces, submit digital calls for fire, and manage the battlefield at a tactical level. Designed as a network of communications, data transfer, and blue force tracking, the Strelets system has been heralded by Russian sources as having reduced the time it takes Russian forces to clear ground and commit fires to eight to ten minutes. Although much like Russian advances in drones the Strelets itself is not an overly impressive piece of equipment when compared to Western equivalents, it is significant in its use by the Russian military in a CIW environment. During large-scale combat operations in Ukraine, Russian forces have been reminded of the dangers of unsecured communications platforms. Given the opportunity to consolidate gains in occupied zones, digital mission command platforms will likely be increasingly employed by Russian forces fighting resistance elements.

Although far outshone by reports of Ukrainian Bayraktar use so far in the conflict, unmanned aerial vehicles are a major pillar of Russian warfare and are only gaining in importance and proficiency. The layered effect of strike capability from drones combined with digital command-and-control structures means the kill chain will be shorter when targeting Ukrainian resistance fighters than it was even in Syria. Combined with Russia’s historical trend of accepting high levels of collateral damage in targeting operations, it appears likely that Russia’s irregular foes will increasingly find drones to be one of the most lethal tools deployed against them.

The urban environment poses a distinct challenge for irregular fighters facing Russian forces. Population centers such as Kyiv and Mariupol remain vital to the success or failure of both sides. However, as highlighted in Grozny, Aleppo, Kharkiv, and Mariupol, Russia has historically chosen to destroy cities rather than fight for them. While irregular forces will need to continue to contest these areas, the risks of operating within the cities will remain high for defenders, the civilian population, and infrastructure. Bringing the fight to an urban area will likely result in Russia’s mass application of firepower rather than accepting the risks of facing continued armed resistance or fighting block by block.

Any discussion of the current war in Ukraine would be incomplete without emphasizing the critical role messaging and information operations have played thus far and will certainly continue to play as the conflict evolves. The Ukrainian military has put on a veritable masterclass in information operations so far in the conflict, from having young Russian captives call their mothers to highlighting the role of average Ukrainians in resistance and publishing photos of dead Russian soldiers to allow their families to identify them. Information operations will continue to play a hugely important role as Ukrainian resistance continues in occupied zones. Irregular warfare practitioners should take note of the effective layering of information platforms and tailoring of themes and messages for target audiences.

Syria as a Blueprint

Russian operations in Syria merged a robust advise-and-assist capability with technological advances at the tactical level, establishing a template for future Russian military successes. As Russian forces adjust and adapt from the shambolic nature of their operations in Ukraine, Syria will likely provide the organizational baseline by which Russian forces attempt to right the ship. While the ongoing fight against the Ukrainian military poses an entirely different challenge, Russian operations to target resistance elements in rear areas will likely bear more than a passing resemblance to their formula for success in Syria. US irregular warfare practitioners should apply a nuanced understanding of the adaptations in Russian force composition and integrated technology when predicting Russia’s response to Ukrainian resistance in occupied zones.

US practitioners cannot assume that unconventional warfare training, planning, and thinking built around historical paradigms is adequate preparation to conduct irregular warfare against a contemporary Russian CIW capability. Nor can they simply incorporate new enemy weapons capabilities as planning factors and assume that the opponent will behave the same. Irregular warfare practitioners deploying in proximity to Russian forces must understand the threat as modular, multilayered, and employed differently from the older stereotypes of Russia’s military capabilities. Although Russian performance against the Ukrainian military has so far proven far less effective than previously assumed, Russia remains a capable and potent threat with an impressive track record of suppressing civil unrest and insurgency.

Maj. Benjamin Arbitter and Maj. Kurt Carlson are Army Special Forces officers with operational and combat experience in the European Command and Central Command areas of responsibility. Both are from 10th Special Forces Group and have recently completed master’s degrees in defense analysis at the Naval Postgraduate School in Monterey.

The views expressed are those of the authors and do not reflect the official position of the United States Military Academy, Department of the Army, or Department of Defense, or any organization the authors are affiliated with, including the 10th Special Forces Group.

Image credit: Ministry of Defence of the Russian Federation, via Wikimedia Commons