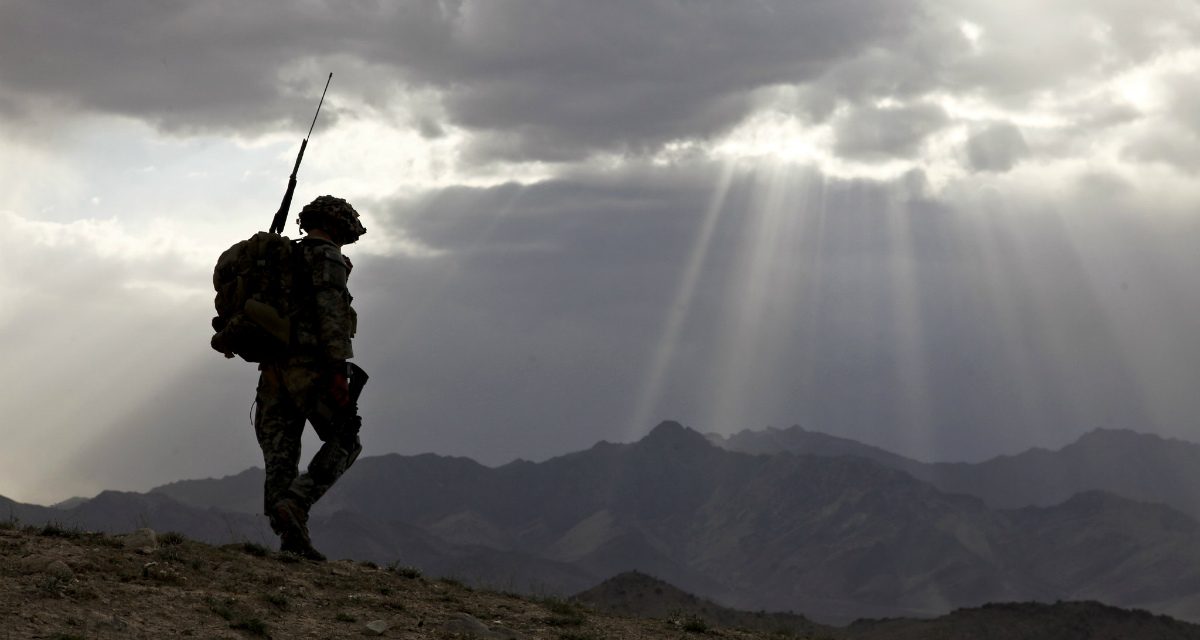 Great-power competition is back. After a quarter-century of unrivaled dominance, the West is once again being challenged by a rising power in China and a revanchist one in Russia.

During the Cold War, it was the Soviet Union that threatened the United States and its NATO allies. Now both Russia and China are seeking to undermine the international order in a series of provocative moves—from Russian-sponsored murders on the streets of Salisbury and Berlin to landgrabs in Ukraine; and from the deliberate subversion of Western democratic systems to the construction of artificial islands in the South China Sea.

Some have argued that the eighteen-year-long military engagement in Afghanistan was an unnecessary distraction from the challenges of this new era. Others have pointed to the mixed record in the country and suggested that, like Vietnam, it has dulled fighting spirit and sapped confidence.

But these views misunderstand both the character of the war in Afghanistan, and characteristics of today’s great-power competition. Rather than a wasteful diversion, experiences from Afghanistan have prepared NATO in several important ways for today’s challenge. The United States and its allies are now able to defend themselves much better because of lessons learned in that exceptionally long war.

Here are five ways in which NATO’s ability to win great-power competition has been improved by our engagement in Afghanistan:

1. Future warfare is integrated. Each of the many phases of the engagement in Afghanistan—from the 9/11 attacks, to NATO allies invoking Article V, to the US-led assault that dislodged the Taliban, to the attempts to enable and sustain viable governance in the country—required ever-greater degrees integration between once separate services. Army, Air Force, and Navy (yes, it did have a role in this landlocked country) worked together, sometimes interchangeably, in a way that would have been unimaginable in the Cold War, or even the Balkans campaigns of the 1990s. This meant servicemen and women who served in the country became more exposed to members from different services, and worked through the inevitable teething problems of force integration. The need for effective integration between services is likely to increase as we face hybrid and novel challenges from Russia and China. By pioneering new forms of military activity, the two powers have made an integrated response vital. Nearly two decades of practice at working jointly have prepared US and allied forces for this task.

2. Civilians are central. Old wars were fought between servicemen and women on battlefields, in the air, and at sea—civilians were rarely in the picture. But Afghanistan put noncombatants at the center of the fight. For NATO, civilians have worked hand in hand with military forces to make vital decisions about tactics, as well as strategy; and many of those decisions have focused on Afghan civilians, not the enemy. In the contest over loyalties, both NATO and the Taliban have tried to win over people. This component of the war was fought not so much with conventional arms as with political messages, information, and civilian-centric reconstruction efforts. Through their deeds, both NATO troops and the Taliban were seeking to demonstrate what they stand for to civilians; in NATO’s case, that meant offering protection and a better life. Civilians are also central to current Russian efforts to interfere in political affairs in several NATO countries, and in their widespread disinformation tactics. The experience of placing civilians at the center of the war effort in Afghanistan has honed individual, unit, and institutional skills considerably, preparing NATO for the current and future great-power competition, especially against Russia, but also against China, considering problems it has with civilian communities in its own country and in places like Hong Kong.

3. Follow the money. Defeating the Taliban campaign to lay improvised explosive devices (IEDs) evolved from swinging metal detectors over desert roads to intelligence-led work that got ahead of the IED campaign. One of the most effect ways to track IEDs was to follow the money that made the whole enterprise possible: cash from heroin sales was often channeled through intermediaries to those who made and laid the deadly mines. The financial forensic skills developed by NATO countries in Afghanistan are vital today as Russia uses corrupt and illegal payments to fund instability in Europe and elsewhere. Cash payments to political parties in the West, in particular, can now be tracked and exposed far better as a result of the Afghanistan experience.

4. Adapt swiftly. The battle against IEDs showed how NATO countries were able to recognize a problem and develop a range of options to tackle it. Some of these developments involved the swift adoption of materiel and technology solutions. Others were matters of doctrine and practice, or about learned behavior. Much rests on the speed with which an adaptive response can be brought into play: better screening of recruits to the Afghan army, for example, reduced insider attacks, but took longer to implement than some of the improvements in medical evacuation protocols that meant more NATO soldiers survived bomb blasts. As Russia and China develop new weapons, from drones to hypersonic missiles, and technologies not yet foreseen, NATO may be tested again on how fast it can develop its defenses. Rapid adaptation, as practiced in Afghanistan, will be key.

5. Wars end, but competition continues. Some historical battles attracted spectators: friends and family or even just interested neighbors who would literally cheer on from the sidelines. A very dangerous pastime even then, but the clear limits—both technological and normative—of the battlefield made it possible. As warfare developed, weapons developed longer ranges and nontraditional actors entered the fold, so killing zones became bigger and the contours of the battlespace also started to blur. Rarely do modern conflicts start with a declaration of war, and formal peace treaties are no longer essential for them to end—like old soldiers, wars are more likely to just fade away. NATO’s experience in Afghanistan has highlighted this continuing trend. And recent Russian assassinations in the UK and Germany, and Moscow’s meddling in NATO’s civilian affairs over a continuous period, show how great-power competition is similarly unbounded. Just as the war in Afghanistan is yet to end, so too can we expect great-power competition to evolve and mutate rather than stop decisively.

Great-power competition is certainly back, but it would be a mistake to regard NATO’s enduring operation in Afghanistan as a distraction or a detour—or worse, as a factor that has made great-power competition more likely. Rather, the long war in that country has prepared the West for today’s challenges. NATO is now far more able to face down Russia and China precisely because of the tough lessons and battlefield adaptations forced upon it by the long and difficult experience in Afghanistan.