All the General’s Men: Lessons from Pershing’s Subordinates in the American Expeditionary Forces 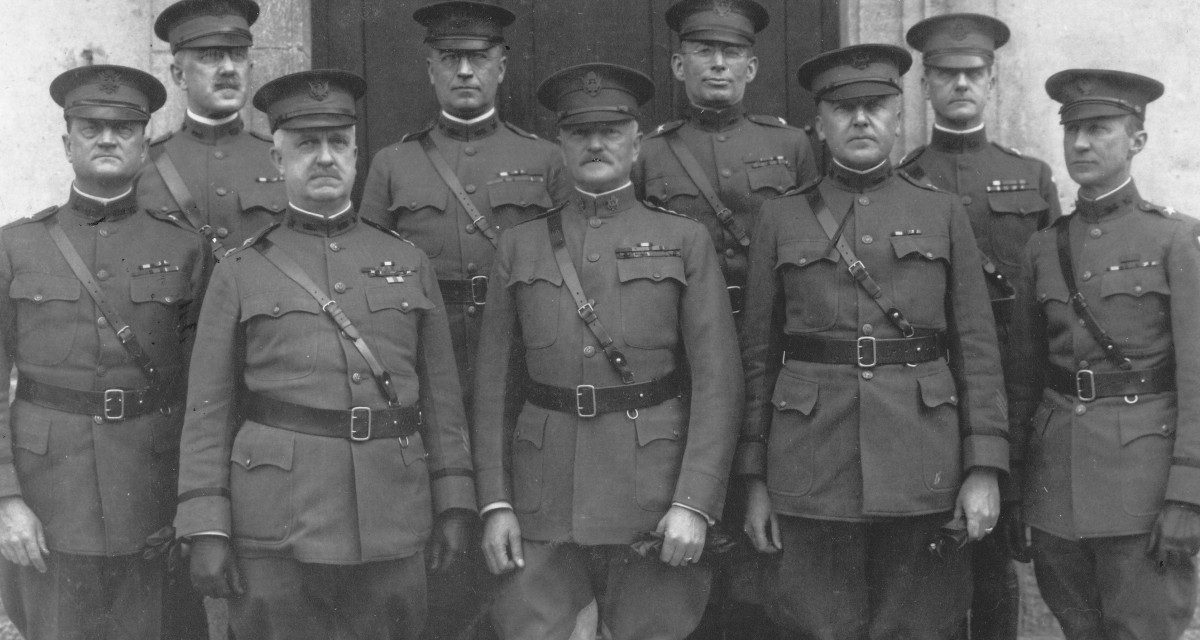 “What they did in 1918 mattered, and it echoes across the generations and into eternity.”

After three years of neutrality, the United States declared war on Germany in April 1917. That neutrality and President Woodrow Wilson’s policy that—in the words of retired Brig. Gen. Robert Doughty in his foreword to Pershing’s Lieutenants—prevented “US Army officers from making even limited preparations for such a war” would see the American Expeditionary Forces (AEF) enter the war dangerously unprepared. With a force, in 1917, of just over three hundred thousand, the AEF was essentially grown overnight, reaching just over 3,700,000 personnel by the end of 1918, over half of which were in Europe.

Given that context, what was the value of American military leadership during the First World War? Can anything be learned from the actions and decisions of AEF leaders? Those questions are at the heart of the new book edited by David Zabecki and Douglas Mastriano.

Maj. Gen. John J. Pershing was given command of the AEF in May 1917 and many of Pershing’s “lieutenants” were rapidly promoted after the declaration of war to fill positions that were newly formed or that they found themselves unprepared for. The AEF entered the war—by many accounts, the first truly modern war—with a lack of command structure and struggling to transport men and materiel to the Western Front. On top of this, Pershing’s focus had been on “American rifle marksmanship, ‘self-reliant infantry,’ and ‘open warfare,’” as Zabecki and Mastriano note, rather than learning the lessons from the previous three years of Allied fighting. Not only were his “lieutenants” faced with the enemy, but they were faced with the challenges of leading in a newly organized army, developing tactics, a continually changing operational environment, and a tough and determined commander.

The leadership of the AEF is one of the most criticized and least understood of the First World War. In Pershing’s Lieutenants, nineteen military historians have written a series of essays that look at the roles and leadership of twenty-two of Pershing’s subordinate senior officers. Using personal writings and letters of both Pershing and some of the subjects of the essays, as well as contemporary biographies and journal articles, each chapter gives a clear and well-written biographical picture of the AEF’s leaders. Each chapter shows how its subject’s previous experience landed him in his role in 1917, the challenges faced during the war, and how wartime experiences informed the officer’s future military career.

Many of the men within Pershing’s force in the First World War are familiar to us today, in some cases because of their achievements later in their careers. Douglas MacArthur would serve as Supreme Commander, Southwest Pacific Area during the Second World War and as commander-in-chief of United Nations Command during the Korean War; George S. Patton, Jr. would become the Allies’ most revered general during the Second World War (in the book, Carlo D’Este calls him “the U.S. Army’s most famous ‘warrior-general'”); one officer, Theodore Roosevelt, Jr., was a former president’s son and would become the only general to land with the first wave during the Normandy invasion, and another, Harry S. Truman, would go on to become president himself. But in 1917 and 1918, they—along with others less well remembered, due in some instances to what Zabecki and Mastriano call “controversies and clashes of personalities”—were all Pershing’s lieutenants. Those who later became leaders in the Second World War brought with them the knowledge, experience, and lessons that had been forged and developed under him.

Superbly edited by Retired Maj. Gen. David Zabecki and Retired Col. Douglas Mastriano, the essays, simply and clearly, analyze the much-overlooked importance of the leaders and commanders of the AEF—from future US Army chiefs of staff and commandants of the Marine Corps to senior staff officers, battlefield commanders, and specialist and regimental officers. The essays, cleverly organized to examine leadership from the top down, come together to collectively show that the AEF leadership in the First World War was a process that worked from the bottom up.

This book brings the contributions of the officers of the AEF out from under Pershing’s shadow and is a valuable resource not just for military historians but for today’s leaders and students of the conduct of war. The series of essays explore the experience each of these twenty-two leaders to derive lessons and insights that remain valuable even over one hundred years after the armistice. Indeed, as the editors of the book note, the “experiences of the emerging leaders in the AEF during World War I shaped the history, not only of World War II, but across the generations, into the next century.”

Image: Pershing and his General Staff at AEF Headquarters in Chaumont, France.