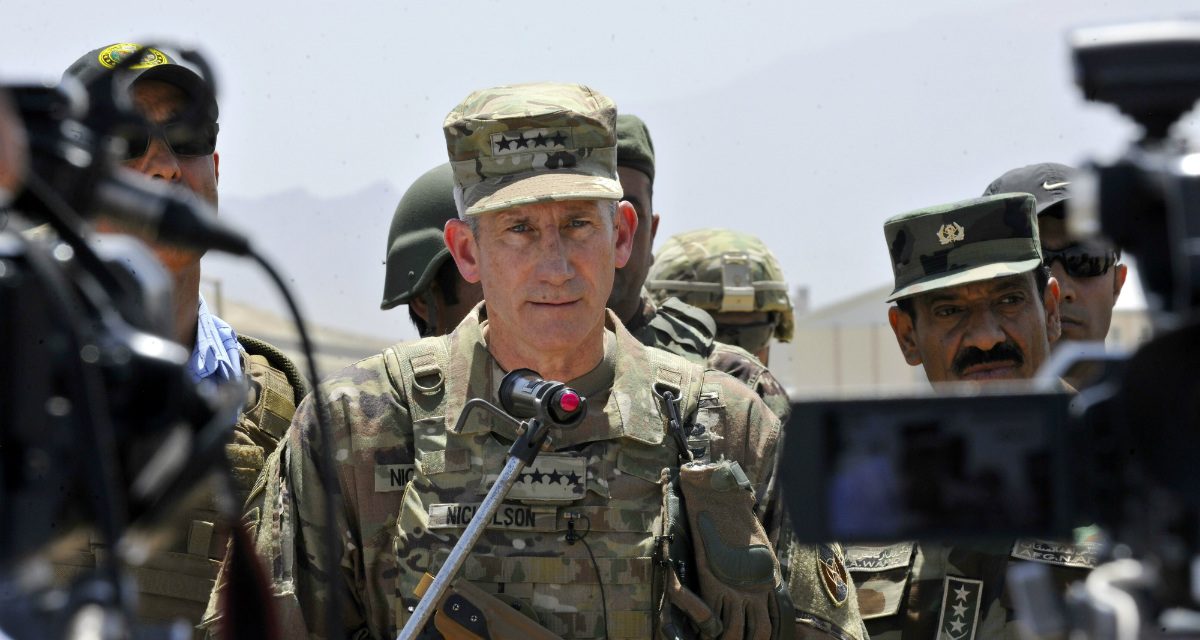 It’s not very often that a US commander in Afghanistan sets off a social media firestorm. But recently, Gen. John “Mick” Nicholson in his final press conference as outgoing US commander in Afghanistan, was accused of wearing rose-colored glasses or blinders. Others took out their frustration on him for the interminable nature of America’s long war in Afghanistan. One voice even went so far as to indict America’s senior military leadership and wrote that the “indefatigable optimism of [America’s] generals is a national liability.”

The logic is that too much military optimism is bad for the country’s good—American commanders are smiling and whistling while the strategic ship of state sinks deeper and deeper into the muck.

While there is a healthy debate to be had about the war in Afghanistan, when it comes to the value of optimism in a supreme commander (or generals, more widely), there’s no question that the above-described characterization—the Panglossian view of American generalship—is egregiously incorrect and at odds with the historical record. Based on my research into the traits of successful American supreme command, I’ve found that a pattern emerges. Successful commanders must always travel a dark road of despair to get to the dawn that attends strategic gains. From Pershing to Petraeus, the natural optimism required for this difficult path is a large part of what has made America’s top supreme commanders effective and victorious.

Take Gen. George Washington in late 1776. With far fewer men and military assets, and having been beaten by the British in battle after battle across New York, Washington was forced to withdraw to New Jersey. So bleak was the moment that Thomas Paine wrote that “these are the times that try men’s souls.” Privately, Washington succumbed to pessimism, admitted in personal dispatches that the Continentals might lose, and told his estate manager that December to “have my Papers” ready to move if the British were to win and send forces to (likely destroy) Washington’s home.

Yet, dire as the situation was, Washington never gave up. Had he wavered or succumbed to defeatism, we’d all be taking a keener interest in cricket and playing “God Save the Queen” at ballgames. Instead, Washington roused his men, asking them to be “resolve[d] to conquer or die” and to “animate and encourage each other” through the tough times on the rough road to a long and hard-fought victory.

Or consider Gen. Ulysses Grant in 1864. He was far from the first of Lincoln’s commanders but unlike his predecessors, he knew well the human cost to be paid to win out over Lee’s Confederate army. Grant did not waver in his core conviction that the Confederates were on their “last man,” as he wrote to Elihu Washburne on August 16, 1864. He kept hammering away until Lee was backed into Richmond’s ramparts, ultimately to surrender.

Gen. Dwight Eisenhower’s experience in 1944 is another useful data point on the power of optimism in arduous command circumstances. Adolf Hitler had made the French coast a Nazi priority, and even sent one of his most talented commanders, Gen. Erwin Rommel, to sharpen the defenses there. The job of rolling back Rommel’s fortifications fell to Eisenhower.

Privately, the invasion’s key decisions weighed on Eisenhower, and he wrote that it would be “difficult to conceive of a more soul-wracking problem.” He famously authored two separate public statements about the invasion’s outcome—one to use if it worked, and one if the operation failed.

We of course know what happened. The paratroopers succeeded at softening up the German defenses for the Allied amphibious landings. The Allies went on to take Paris, liberate the rest of France, and defeat the Nazis.

So what should we take from this brief survey of successful supreme command?

America’s generals, even the very best, are far from infallible. At times, Washington, Grant, and Eisenhower questioned themselves and their judgments. But then, who wouldn’t in such terrible circumstances, duty-bound to spend certain young lives and national wealth at war in pursuit of uncertain strategic gains and political decisions? And so, yes, they do despair and can be privately negative.

Yet, in such circumstances, far from a “liability,” outward optimism is a general’s greatest asset. Hope must be in the supreme commander’s DNA—without it the whole enterprise would rot from the top down.

The same is very likely true of Afghanistan today. We can be assured that even the most pessimistic military analyses have been consulted, and yet, the political decision to fight there has been made. We shouldn’t disparage optimism in our military leaders because of previous decisions one may or may not like, temporary setbacks, or impatience at the always-challenging nature of achieving strategic gains.

Orwell once rightly pointed out that the fastest way to end a war is to lose it. But surely a corollary must be that the mind of the supreme commander is the first place wars are lost. No cancer kills more quickly in a military unit than a leader lacking public faith in the endeavor.

America is far better off with generals imbued with the right touch of “indefatigable optimism.” Because without this trait, America would be doomed to defeat after defeat—indeed, the country likely wouldn’t even exist.