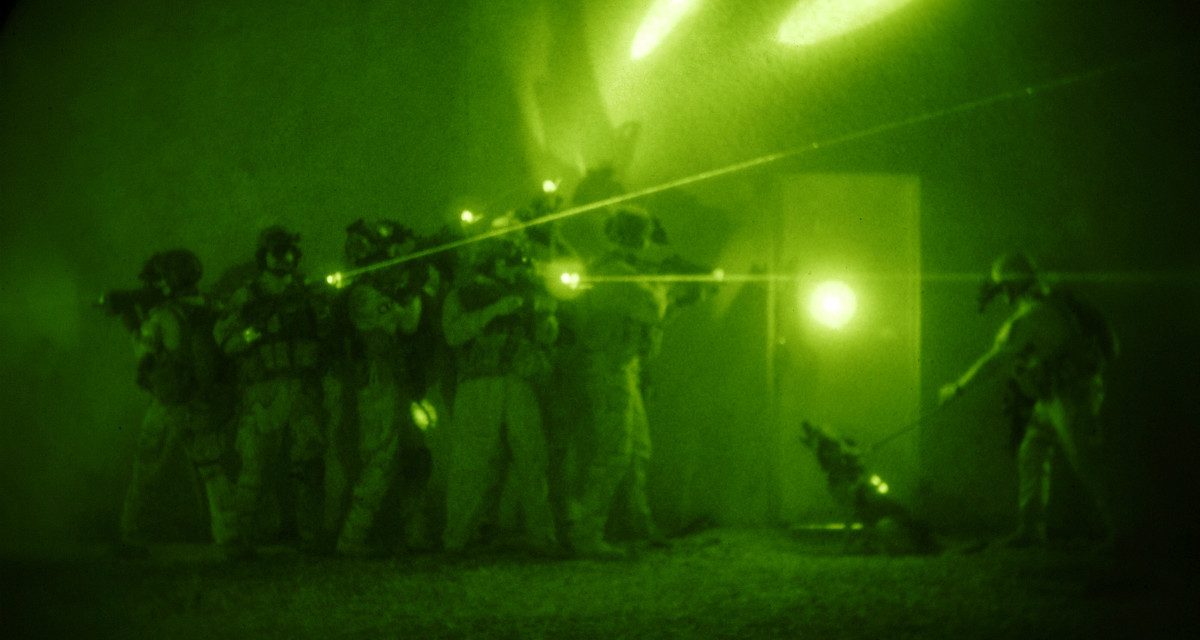 The target, a high-level leader in a terrorist organization that intelligence has indicated is plotting to execute a major attack in the United States, had no idea what was about to happen. High above, and several dozen kilometers to the east of his family’s compound, the red light next to the open ramp of a C-130 turns green and a team of SEALs dives out. Their steerable, rectangular, chutes open almost immediately as the team members execute an almost perfect High Altitude/High Opening (HAHO) jump. If the target were to look up he might be able to make out the faint specks floating in the night air. Unfortunately for him he is asleep and totally unaware of what is about to happen to him.

The team lands a few kilometers away from the objective. They stash their equipment, link up, and move silently towards the target, where they cordon off the compound. The breach team affixes a small explosive and detonates it. The assault team moves in almost as fast as the debris from the explosion. The target is found, bound, and separated from the rest of his family as the sound of helicopter blades chewing up the air can be heard getting louder in the distance.

The team is only waiting a few minutes for the retrieval aircraft to arrive but in that time they have searched every room, exploiting the site—rounding up as many documents and as much computer hardware that they can find. Once the Blackhawks arrive, kicking up a cloud of dust as they come in, the team moves out of the compound with the target and aboard the aircraft. They are gone almost as fast as they arrived, leaving the target and his family to wonder what just happened.

This is what most people think of when they hear the term “special operations,” elite forces swooping in snatching a target and swooping back out again before anyone knows they were there. Whole Redbox machines could be filled with movies that have plot lines with special operators as the heroes—steely-eyed killers, super soldiers, whose missions are classified at levels above Top Secret.

But as author Mark Moyar describes in his new book Oppose Any Foe, special operations hasn’t always enjoyed the notoriety it has today. In fact, by reading his book you will soon learn the opposite is true, that American special operations forces of today were born out of failure and adversity. It’s a true testament to the perseverance of the proponents of special operations that they are even available to be so heavily relied on today.

In the first half of the book Moyar discusses the beginnings of US special operations in World War II. The stories of the Army Rangers, Navy Frogmen, Marine Raiders, and a combined United States and Canadian element known as the Forcemen have a similar feel. Except for the Navy Frogmen, each of these forces were used in both successful unconventional and less-than-successful conventional roles and were ultimately disbanded.

A prime example of this dichotomy is the story of the Army Rangers. The Rangers enjoyed some initial success in an unconventional role supporting Operation Torch, the invasion of North Africa. During that operation they were tasked with seizing the port of Arzew on the Algerian coast. Taking the town quietly would spare it from a bombardment by naval gunfire and preserve the facilities for use by Allied forces. The Rangers were successful in sneaking up on the Vichy French contingent, seizing the two forts that surrounded the port while losing only two soldiers in the process.

With that success in the books, Moyar explains that the temptation arose to use the Rangers in all manners of missions. While supporting operations in and around Salerno, Gen. Mark Clark decided to split up the Ranger battalions and attach them to conventional units in an attempt to break the Germans’ Winter Line. This re-tasking angered leadership in the Rangers, who thought “it squandered the specialized capabilities they had toiled months, if not years, to develop.” Their protests fell on deaf ears. Gen. Clark believed “keeping special units in reserve until the need for special missions arose was a luxury that he could not afford.” His belief stemmed from the situation he found himself in: it was so bad he was even pulling musicians out of bands as replacements.

The decision was a disastrous one for the Rangers. They lost almost half their formation to casualties, with many more Rangers sent to the rear for what would be called PTSD today. This left gaping holes in Ranger units, which were filled with soldiers who were not of the same caliber as the initial set of troops, reducing their effectiveness even further. While they would go on to be given one of the hardest missions of D-Day, scaling the cliffs of Pointe du Hoc, their use during special missions was few and far between for the rest of the war.

The Ranger battalions would not survive World War II. All of them would be disbanded at the end of the war. They would not return to active service until 1974 when then Army Chief of Staff, Gen. Creighton Abrams would direct the formation of a Ranger battalion. That battalion and two others remain active to this day.

As Moyar moves through the history of special operations in Korea and Vietnam the same pattern arises: a special operations unit is stood up, said unit is perceived to be stealing the best and most reliable soldiers, failures happen, the unit is slammed by high-level decision-makers, and the unit is either disbanded or pushed into relative obscurity.

While the early chapters of Moyar’s book do a fine job of getting their points across, the scope of the material is so expansive that the level of detail feels lacking in some areas. It’s not until Moyar gets into the more modern conflicts of Iraq and Afghanistan that he fine-tunes his focal point and delves deeper and more satisfyingly into the operations he describes. The emphasis on details in the last few chapters does not, however, change the theme of the early chapters—that US special operations forces exist despite failures. These failures come with familiar names like Desert One, Blackhawk Down, and Operation Anaconda.

The roles and missions of special operations forces must also be clearly defined. Surgical strikes—while US special operations forces have conducted them repeatedly and largely with precision and effectiveness in America’s most recent wars—are not the only types of operations that they are trained for and ready to execute. Special operations units are generally broken up into two categories. “Black SOF,” consisting of Delta Force, SEAL Team 6, and similar units, are responsible for the type surgical strikes described above, while “White SOF,”—everyone else—are responsible for things like advising foreign forces.  The focus on surgical strikes in recent conflicts have forced “White SOF” to shift some of their focus to keep up with the frenetic operational pace. Moyar argues that these special operations units must get back to the basics of training foreign partners. The demand for this type of training is already there, but it will require support from the State Department for approvals.