An Unmanned, Tank-Killing Solution to the Problem of Multi-Domain Operations 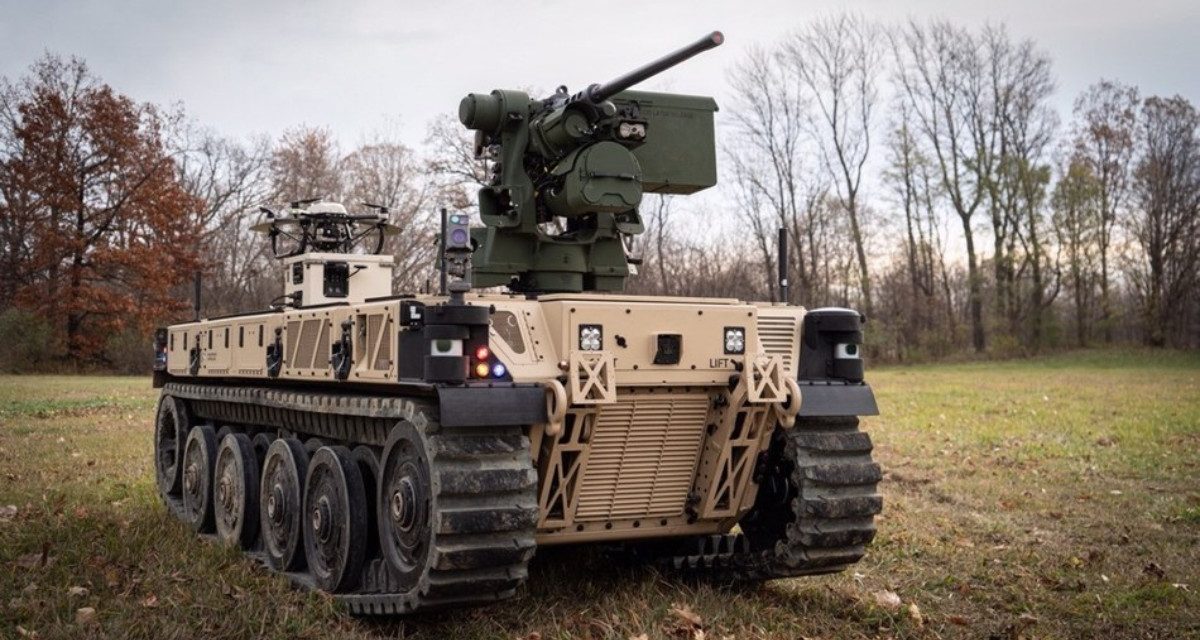 Multi-Domain Operations is driving change across the Army, from logistics to training to the way Army Futures Command has developed its modernization and acquisition strategy. But is it a comprehensive operational concept? Earlier this year, retired Brig. Gen. Huba Wass de Czege criticized the concept’s lack of clarity on the military problem it is aimed at solving and questioned why MDO chooses to focus on adversaries’ anti-access and area denial systems (A2/AD) in order to deter and defeat an armed attack. Ostensibly, MDO focuses on A2/AD because these adversarial systems are meant to deny the joint force its ability to prosecute the combined arms maneuver that has become the hallmark of the US military’s combat power. However, especially in the case of Russia—the most natural pacing threat for the Army as a landpower service—there may be a more suitable alternative approach, given the security dilemma that arises from the implementation of MDO’s tenets in the Baltic states. Instead of neutralizing A2/AD, perhaps the United States and NATO could maneuver within the denied space to mount an effective defense.

The MDO concept states that “over the last decade, Russia has increased its investments in anti-access and area denial capabilities and systems intended to deny the Joint Force entry into a contested area and set the conditions for a fait accompli attack.” To deny such an attack, MDO prescribes a “calibrated force posture,” which includes forward presence forces; “multi-domain formations” by echelon; and “convergence” of effects across time, space, and domains to penetrate A2/AD systems, disintegrate those systems, and exploit the enemy through maneuver. In essence, MDO reads as if the joint force will neutralize A2/AD systems across domains and then conduct joint operations to defeat an enemy offensive. But what if friendly ground forces could defeat a Russian offensive without neutralizing its A2/AD systems? What capabilities and tactics would be necessary to enable this course of action?

A 2016 RAND study titled “Reinforcing Deterrence on NATO’s Eastern Flank” outlines the challenge of such a task, finding that Russian forces could reach Tallinn and Riga in as little as thirty-six to sixty hours. Despite these dire findings, the wargames RAND conducted for the study also indicated “that a force of about seven brigades, including three heavy armored brigades—adequately supported by airpower, land-based fires, and other enablers on the ground and ready to fight at the onset of hostilities—could suffice to prevent the rapid overrun of the Baltic states.” This force posture, argues RAND, while not sufficient to defeat a Russian offensive on its own, would effectively deny the fait accompli situation that MDO is intent on preventing. Furthermore, the study offers insight into the operational significance of Russia’s A2/AD systems—they would deny and disrupt US and allied forces’ ability to provide sufficient air support and reinforcements to the beleaguered ground defenders.

At initial glance then, the logic of MDO is compelling: pre-position the necessary amount of forces forward; and, when necessary, penetrate and disintegrate A2/AD systems to enable the joint force to fight the fight it wants. However, both the RAND study and the MDO concept unfortunately ignore the security dilemma caused by the presence of such a military force along Russia’s border. Namely, how would Russia perceive and react to such a deployment of forces, especially combined with the prospect that the United States and NATO could rapidly neutralize its A2/AD systems? This combination of force posture and capability could be construed as offensively aimed at Moscow and thus provoke a preemptive strike or asymmetric escalation from Russia.

However, there may be another approach to mount an effective defense. The RAND study highlights another potential center of gravity to target: the key Russian maneuver forces, their armored divisions. Perhaps if these divisions can be neutralized by pre-positioned forces without air support, this would mitigate the need to rapidly disintegrate Russian A2/AD. As such, it is worth considering investment in tank killers—in particular, maneuverable anti-armor capabilities to complement static area defenses that could otherwise be circumvented. Consider an asymmetric solution: the Robotic Combat Vehicle–Light (RCV-L).

As Jen Judson at DefenseNews reports, while the Army’s rough acquisition strategy calls for the first unit to receive the RCV-L in 2028, the service is still “experimenting with technology and how the vehicles might fit into future formations through the Army’s Next-Generation Combat Vehicle modernization office.” As such, the program requirements are yet to be defined. Perhaps this is an opportunity for the right platform to be matched with the right mission.

What if an RCV-L could outmaneuver a Russian main battle tank or armored personnel carrier on any given terrain the latter platforms could traverse? This would notionally give it an asymmetric advantage in infiltrating and neutralizing armored formations. Similar to the North Vietnamese tactic of closing with US troops to deny American superiority in firepower, a squad of RCV-Ls could close with an armored column, protected by their size and speed, to strike armored targets at vulnerable points and stymie a mechanized offensive. Such an approach would have several advantages. First, it would circumvent the need to rapidly neutralize A2/AD systems as RCV-Ls could be pre-positioned throughout vulnerable areas across the NATO alliance. Second, it would bring significant ambiguity into the calculus of Russian decision making due to the novelty and unknown efficacy of the RCV-L, especially if it is equipped to deliver effects across different domains. And finally, it would likely be highly cost-effective if an RCV-L can readily neutralize a Russian main battle tank.

Perhaps the RCV-L can serve as the anti-tank platform of the future, trading standoff and armor for speed and maneuverability to deliver lethal and nonlethal effects against armored targets at close range. Drawing inspiration from retired Col. John Boyd’s analysis presented in a A Discourse on Winning and Losing, not unlike the German stormtroopers of World War I or the Panzer blitzkrieg tactics of World War II, the RCV-L could theoretically maneuver through armored formations to disrupt, disorient, and defeat these echelons and units in detail and in depth. This is not to dismiss the challenges in developing this technology, but it does serve as an example of a way that the RCV-L, and potentially other capabilities, could win within an A2/AD environment’s operational constraints without the need to rapidly compromise the A2/AD systems themselves.

Though this could mitigate the security dilemma to an extent, it is not certain if any technological solution can directly solve the tensions that exist between Russia and NATO in the Baltics. However, the fact that the United States would be willing to deploy specialized robotic vehicles in lieu of armored brigade combat teams at least signals that the United States is cognizant of the security concerns that Russia harbors while clearly supporting the defense of NATO. Of course, Moscow could distrust the signal and anticipate a surprise NATO offensive, but not only is this Russian response possible from any NATO defensive buildup, but the RCV-Ls would be relatively cost-effective compared to a large-scale troop presence, especially when considering the potential human cost of conflict.

As Wass de Czege identified, and the discussion herein demonstrates, it takes significant additional analysis and inference on the part of the reader to draw relevant recommendations for force development and associated tactical employment from the MDO concept as it is currently written. MDO’s operational focus on A2/AD without comprehensively framing the US Army’s military problem in the defense of NATO allies increases the difficulty of exploring all possible solutions and exacerbates the risk of potential inadvertent escalation. Of course, the ambiguity may have been necessary considering that the Army must develop capabilities and tactics for force employment globally, not just against Russia or in the Baltics. Other threats, geographies, and contingencies must be evaluated, but the concept of operating within A2/AD operational constraints has been posited before in at least one other theater—the Pacific. Dr. Stephen Biddle and Dr. Ivan Oelrich, both formerly of the Institute for Defense Analyses, articulated such an approach to address the Chinese A2/AD threat by outlining the capabilities and limitations of the A2/AD systems and using those to recommend operational requirements for US force development.

None of this is to suggest that the Army should not continue to explore counter-A2/AD capabilities; however, by looking for, and exploiting, potential asymmetric advantages within such a constrained environment, even if decisive victory is unattainable, the Army could achieve greater lethality and survivability, buying more time for air support and reinforcements to arrive.

As Gen. Mark Milley, chief of staff of the Army, clearly states, MDO in its current iteration “is not a final destination, but is intended to provide a foundation for continued discussion, analysis, and development.” He writes further,

We must challenge our underlying assumptions, and we must understand the capabilities and goals of our potential enemies. That is how we change our warfighting techniques and build the fighting forces we need in the future. It is also how we maximize deterrence and, if necessary, win future wars.

Perhaps Army Futures Command should consider testing a squad of RCV-Ls to serve as an anti-armor maneuver unit during upcoming field experiments. At best, it could prove to be a modern seven-ton David prepared to fight a sixty-ton Goliath. At worst, it would further the “discussion, analysis, and development” that Gen. Milley called for.

Wonny Kim is a JPME student at National Intelligence University and a recent graduate from the School of International and Public Affairs, Columbia University. He is a major in the US Army Reserve and serves as an innovation officer at the 75th Innovation Command. His professional experience includes service as an information operations officer at US European Command (2017–2018).