Army of Makers: Harnessing the Power of America’s Hackers and Innovators 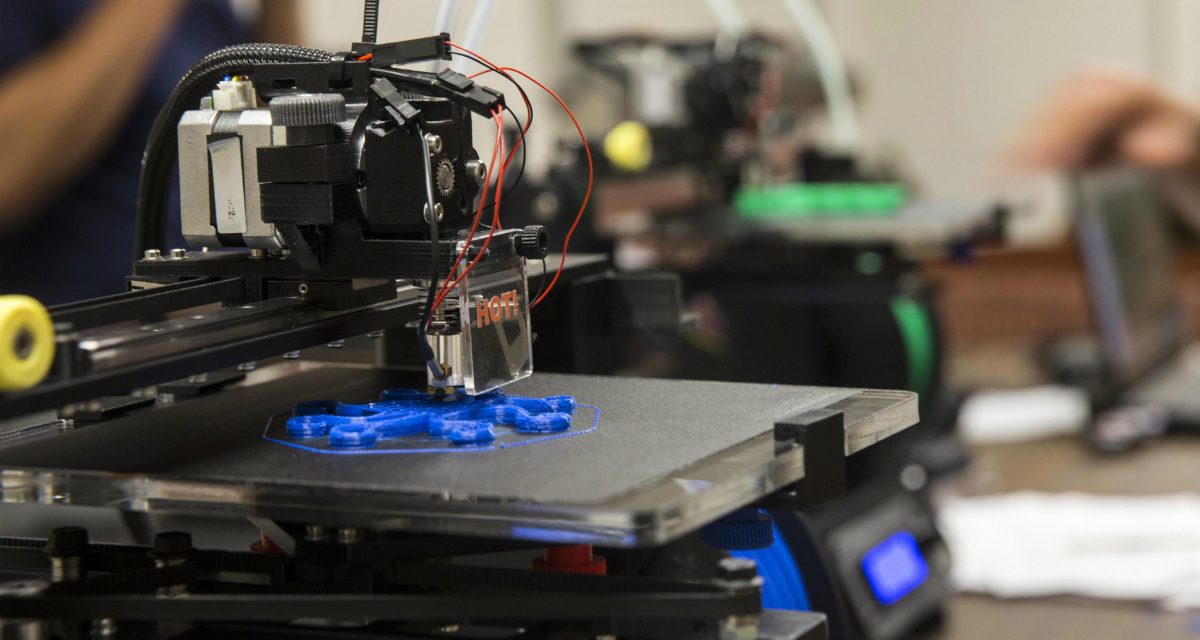 The United States Army has long reaped the rewards of its technological dominance. But its relative position is beginning to erode. And that trend is bringing us ever closer to a point at which the Army must adapt the way it engages with technological advancements—or risk catastrophe.

Today, near-peer adversaries like Russia and China continue to invest heavily in modernizing their forces with a particular eye to leveraging emerging technology. Meanwhile, as consumer electronics continue to diffuse to every corner of the world, nonstate actors are becoming increasingly adept at using modern technology to overcome their comparative capability disadvantages—like the way ISIS has successfully weaponized consumer drones to conduct lethal strikes in Iraq and Syria, signaling the return of a persistent air threat. The US Army must anticipate that it will encounter more and more advanced threats, from both state and nonstate actors, on future battlefields. Continued innovation from the military is necessary in order to reclaim the margin of its advantage. But how?

A uniquely responsive force that could play a uniquely effective role is the maker movement. With small-scale innovators working out of garages and workshops around the country, there is an abundant supply of makers, hackers, and tinkerers who could be leveraged to tackle a laundry list of technological challenges. If the Army wants to get serious about embracing innovation, it needs to create a deliberate strategy to message, consult, and employ the collective innovative potential of the American people.

The maker movement—an eclectic mix of DIY enthusiasts, hackers, and inventors—has now entered the mainstream. There is no singular definition of what constitutes a maker, with the term applying broadly to a range of hobbyists who are leveraging modern technology for creative and engineering projects. Robotics, 3D printing, and computer programming are heavily represented in the movement’s portfolio. While its roots can be traced back decades, the rise of low-cost 3D printers, supporting web forums, and dedicated shared workspaces known as “makerspaces” have facilitated the movement’s growth. By 2016, there were more than four hundred dedicated makerspaces in the United States with many more planned. Makerspaces are now a feature of many college campuses, often nested within their engineering departments or university library system. These makerspaces often feature specialized tools and equipment like 3D printers, though more importantly they provide access to a community of experience to learn from. From this community grew dedicated gatherings like the maker Faire, held around the country for local innovators to showcase their projects, which collectively garnered over 1.5 million attendees in 2017. Across all metrics, the maker movement continues to grow rapidly.

The Department of Defense has been acutely aware of the maker movement’s value and has worked to both foster and collaborate with it. DARPA—the Defense Applied Research Projects Agency—has funded grants to support the maker movement in high schools with the hope of eventually capitalizing on an increased interest in STEM. DARPA has additionally provided grants to TechShop, a national chain of makerspaces, to increase access for service members and veterans. While TechShop has since closed its doors, DoD interest continues largely in the form of sponsored maker competitions known as hackathons. Challenges have ranged in scope from improving cybersecurity to defeating improvised explosive devices or weaponized commercial drones. The MD5 National Security Technology Accelerator, Defense Innovation Unit, Army Research Laboratory, and Army Futures Command have all sponsored such initiatives. Army Futures Command and MD5 recently sponsored a hackathon aimed specifically at defeating weaponized commercial drones, a specific reaction to the ISIS tactics observed in Iraq and Syria. The promise of such hackathons, leveraging public talent to address the challenge of an adversary’s innovation, provides a template for how similar competitions can be hosted in the future.

In a similar vein, DoD has worked to engage universities to employ the ingenuity of students with promising programs like Hacking For Defense—a program that functions as a university class where students confront problem statements from DoD with an emphasis on applying lean methodologies and design thinking. Built as a nonprofit program within the innovation consultancy firm BMNT, twenty universities will host Hacking For Defense courses in 2018.

Within Army Futures Command, the Army Applications Laboratory is being stood up specifically to help incorporate nontraditional defense contractors, such as hackathon winners, into the acquisitions framework. The potential gains of such programs, both in new technologies and cost savings, are enormous. In a recent Marine Corps innovation competition, a corporal produced an imitation Raven UAV—usually priced at over $30,000 a unit—for $615 at a San Francisco makerspace.

The US military is also establishing its own makerspaces to support combat operations. The Rapid Equipping Force has containerized “Expeditionary Labs” that feature fabrication equipment and 3D printers to support warfighters in theater. These Ex Labs, as they’re called, enable the end-user warfighter to present problems and receive timely solutions while deployed. The Marine Corps has also embraced 3D printing by designing expeditionary print labs to create replaceable parts. An important element of the Marine Corps system is that there are clearly defined, authorized levels of risk for 3D-printed components. The risk associated with a component failing determines what level of commander is needed to authorize it. Individual Marine Corps units can now deploy with 3D printers to create 3D printed-replaceable parts in theater, with demonstrated success creating low-cost UAVs in support of Operation Inherent Resolve. This progress indicates the potential that makerspaces have within the military itself. Additive manufacturing techniques, primarily 3D printing, have significant military applications and could vastly shorten supply chains. By connecting warfighters with 3D printers through makerspaces, DoD can address the difficulties inherent in procuring unique spare parts in a timely manner. Additionally, such an approach empowers service members to tinker themselves, making adjustments and testing new components to resolve problems that have not yet been addressed by the larger acquisition system.

While the Army has recognized the value of working with the maker movement, and has demonstrated a willingness to do so, much more is needed to exploit the movement’s full potential. To do so, the Army needs to create mechanisms aimed at several specific goals.

First, it needs to get better at messaging the problems it encounters to the maker movement. While hackathons begin with clearly defined problem statements and parameters, there are a whole range of capability gaps that are left unaddressed. makers are likely aware of the problems that see significant media coverage—like the proliferation of weaponized drones—but would be left unaware of the litany of other areas where the Army desperately needs innovative solutions.

One simple option is to create an open-source website where units can catalog the problems they have encountered while training. With the right mechanisms in place to safeguard operational security and specific tactics, techniques, and procedures, units could publicly post problem statements to a wide audience of innovators in the hope that an individual or maker collective can identify a potential solution. Should a maker have a promising solution, there would be a point of contact where they can begin to pitch it to the Army for further consideration, or even seed funding. This website would in effect seek to model the success of Hacking For Defense, but be aimed more broadly at individual innovators. While this would surely draw some concern over forecasting vulnerabilities, it is hardly any more revealing than significant swaths of military journalism that frequently detail the Army’s shortcomings. And in any case, protecting a vulnerability that remains unsolved is hardly preferable to avowing one and rapidly finding a solution. Other mechanisms could also facilitate public messaging, but the key is that the Army must ensure it has a viable strategy to communicate to the maker movement the areas where it seeks innovative solutions.

Second, beyond communicating challenges to the maker movement, the Army also needs to create the institutional systems to capitalize on makers’ input. One option that would facilitate this is to encourage more institutional partnerships at lower echelons. By empowering units at the brigade or even battalion level to engage makers and build organizational partnerships, these functional relationships could blossom into sustainable partnerships. If these units were explicitly encouraged to reach out and seek nontraditional partners to assist in innovation, such as local universities or makerspaces, they could directly communicate problem statements and leverage their expertise to explore solutions. If a unit were to identify an answer to an Army-wide problem, it could disseminate it across the organization with a proponent such as Futures Command acting as a conduit of best practices. If units were authorized to spend even small amounts of money to support such relationships, individual units could challenge local innovator communities to address their uniquely identified challenges—essentially transforming each military installation into a laboratory to identify potential options.

The Army should also make it easier for small-scale innovators to monetize their innovations and create an economic incentive for makers to consider the challenges presented by the Army. The Army Applications Laboratory, within the newly created Futures Command, seems like a strong step in the right direction. By serving as a “concierge service” to aid startups and nontraditional vendors in doing business with the Army, the Army Applications Laboratory could help bridge the experience gap. While many makers might be moved to assist the Army in the name of public service, streamlining the process of converting good ideas into profitable business would prove a powerful incentive to encourage engagement. Easing the burdens of the acquisitions process, offering seed funding, or simply paying out cash rewards for viable ideas could all facilitate this.

Finally, the Army should seek to foster a larger maker community within the military itself. Installations should consider establishing their own makerspaces where service members can tinker and explore technology. Such makerspaces would serve as an ecosystem where end users could consider solutions to their own problems. Nobody is better poised to understand and address the specific problems confronted by men and women in uniform than those men and women. Empowering them by providing access to makerspaces and technology such as 3D printers encourages particularly valuable, bottom-up innovation. Furthermore, the educational value of such spaces would pay significant dividends as the military continues to embrace technologies like 3D printing that will require skilled operators. The Army should also follow the Marine Corps’ example and clarify the approval process for units to incorporate their own 3D-printed components and replaceable parts. In the longer term, the Army should consider pushing down 3D printers to the battalion level, serviced by a dedicated 3D print craftsman MOS. With a central database of validated CAD files, these 3D printing hubs could serve as an expedient way to produce replacement parts while avoiding the existing delays inherent in the Army supply system. If defense contractors were required to provide CAD files for many of their small component parts (and the relevant intellectual property issues were addressed), Army units could use deployable 3D printers to rapidly equip themselves in austere environments. While this is likely a long time off and certain to face considerable initial resistance, equipping lower echelons with 3D printers would solve a variety of existing logistical challenges.

These are only a few of the ways the Army could support and leverage the maker movement in support of military innovation. By embracing the movement’s current momentum, and guiding it towards solving pressing challenges, the Army could greatly augment its innovative capacity, allow lower echelons to make progress on immediate tactical challenges, free up resources at higher levels to fund transformative research and development, and begin to safeguard and even bolster the technological dominance on which the US military’s comparative advantages have so long been based.