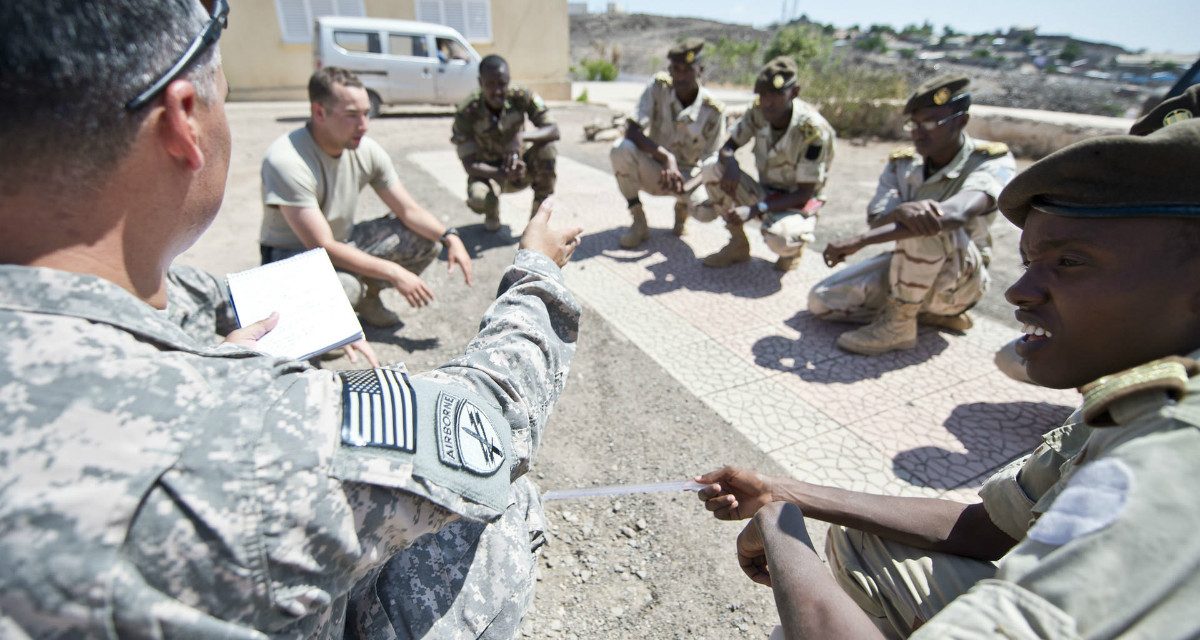 The Army recruiting website proudly boasts “over 150 jobs to make you stronger.” The vast majority of these are open to both active duty and reserve soldiers. And for both officers and enlisted soldiers, the training received for most of these jobs is identical, regardless of component. But that’s not the case for all.

Consider civil affairs forces, “trained and educated to shape foreign political-military environments by working through and with host nations, regional partners, and indigenous populations”—essentially responsible for shaping the civil environment all over the world. Civil affairs soldiers assist the commander of a supported military unit in preventing civilian interference with operations, organize and assist in the distribution of foreign humanitarian assistance, and act as liaisons between the Department of Defense and the local populace in foreign countries among a range of other civil-military tasks.  Selection and training takes over a year and a half and involves everything from learning another language to jumping out of airplanes. After completing training, newly christened civil affairs soldiers deploy to worldwide combat zones, humanitarian crisis regions, and other problem areas requiring low-intensity intervention.

This lengthy training pipeline equips civil affairs soldiers to meet the demands of often difficult missions—that is, unless you are one of the reservists who make up over 82 percent of America’s civil affairs personnel. In that case, you will still deploy to the same combat zone or crisis area and be expected to do the same job, but without nearly the same training.

Due to the US Army Reserve’s training model, civil affairs soldiers are undertrained and underdeveloped. Reserve component civil affairs officers and enlisted soldiers have been relied on heavily to support an upswing in civil-military missions without any increase or enhancement of training to match that of the 18 percent of civil affairs forces on active duty, who receive the full spectrum of training at the special operations schoolhouse.

Several factors have led to this divergence in training standards. First, over the last seventeen years of high-tempo deployments, with additional requirements for special operations forces opening up in locations every year from Africa to South America, active duty forces have had to rely on support from reserve civil affairs units like never before. Currently there are reserve civil affairs soldiers operating (publicly) in Northern Europe, the Pacific, South America, the Middle East, Africa and many more locations. To meet the demands of these mission requirements, the Army has chosen to mass produce reserve component civil affairs soldiers, quickly and cheaply.

Second, training civil-military special operations forces is very expensive. Language classes, airborne training, and over a year of specialized civil-military education culminates in a two-week exercise at Fort Bragg. Civil affairs soldiers are trained within the special operations schoolhouse and alongside Army Special Forces—a recognition of the light and mobile requirements of civil-military operations and the need to be able to quickly engage with the local civil populace and government during the early days of a conflict or disaster.

For reservists, it is a compacted course with the price tag drastically reduced. Enlisted reservists take an 11-week course at Ft. Bragg’s John F. Kennedy Special Warfare Center and School with no language or airborne component. For officers, the course is largely taught online, with two four-week resident phases at Ft. Bragg, concluding with the reserve officers joining the active soldiers in the field for the second phase’s last two weeks.

Implicit in the realignment of reserve civil affairs under US Army Reserve Command in 2006 was the notion that active duty civil affairs forces remaining under US Army Special Operations Command would focus on support to special operations units, while reservists would support conventional units. But operational necessity has rendered that clean split largely a pipe dream. Reserve component soldiers regularly deploy alongside and in support of special operations units, but without the advanced training that enables success on such missions.

When asked hard questions regarding training time and funds, USACAPOC higher-ups will often, as a source of pride, point to the unique specialization of the civil affairs reservist, whose civilian career outside the Army, they say, offsets the comparative lack of training. And there is merit to this argument: while most active duty civil affairs soldiers have only their previous military training to prepare them for the challenges they’ll be tasked with addressing during deployments, reservists often specialize in anything from law to economics and education to engineering in civilian life. But specialty training—whether advanced language skills necessary for working with foreign nationals or airborne training that allows them to accompany Special Forces during military-to-military training—cannot be substituted with advanced education and day jobs.

This issue is reminiscent of the “paper tab” Special Forces soldiers of the 1980s, when reservists and National Guardsmen could take distance learning courses in order to earn a Special Forces tab and join an elite community. This separate-but-not-equal civil-military training created a class system that is felt within a tight knit group that prides itself on small and cohesive teams.

With the requirement for civil affairs (and psychological operations, which faces a similar set of problems) personnel increasing in a proportionate response to the surge in missions worldwide, civil affairs reservists are being called up to active duty more frequently than those of almost any other type of unit. My current Army Reserve battalion has deployed at least a company-size element seven times to Iraq, Afghanistan, and the Horn of Africa since 2001. This high deployment tempo leaves reserve civil affairs units struggling to fill their billets, which in turn means the same people are forced to go time after time. These individuals’ deployment tempo far outpaces the reserve component’s often quoted but rarely enforced 1:4 deployment to dwell time ratio, and for many, even exceeds the 1:2 ratio of the active component. Yet these soldiers, frequently deployed alongside Special Forces and given similar areas of responsibility to their active duty counterparts year after year, are still considered to be supplementary, and consequently remain undertrained.

It is time to correct this problem. US Army leaders should bring civil affairs reservists into the same selection and training pipeline as the active component. Sending reservists to attend the same course at the Special Warfare Center is the only way to ensure they are as prepared as their active duty counterparts to perform their jobs, just like bringing National Guard candidates into the active duty Special Forces Assessment and Selection pipeline was necessary to ensure a common standard across both components. Until this disparity is resolved, the US Army’s attempt to save money by holding the majority of the civil affairs forces in a low-cost reserve training program while relying on them to fulfill a robust global mission set will continue to violate a basic special operations forces truth: that “quality is better than quantity.” And it will be to the military’s and the nation’s detriment.

Capt. David L. Harrell is a civil affairs officer, currently deployed to the Horn of Africa in support of Operation Enduring Freedom. He previously served as an intelligence, surveillance, and reconnaissance officer-in-charge in Afghanistan. His civilian occupation is within the intelligence community and he currently resides in Washington, D.C. The views expressed herein are those of the author and do not reflect the position of the United States Military Academy, the Department of the Army, or the Department of Defense.