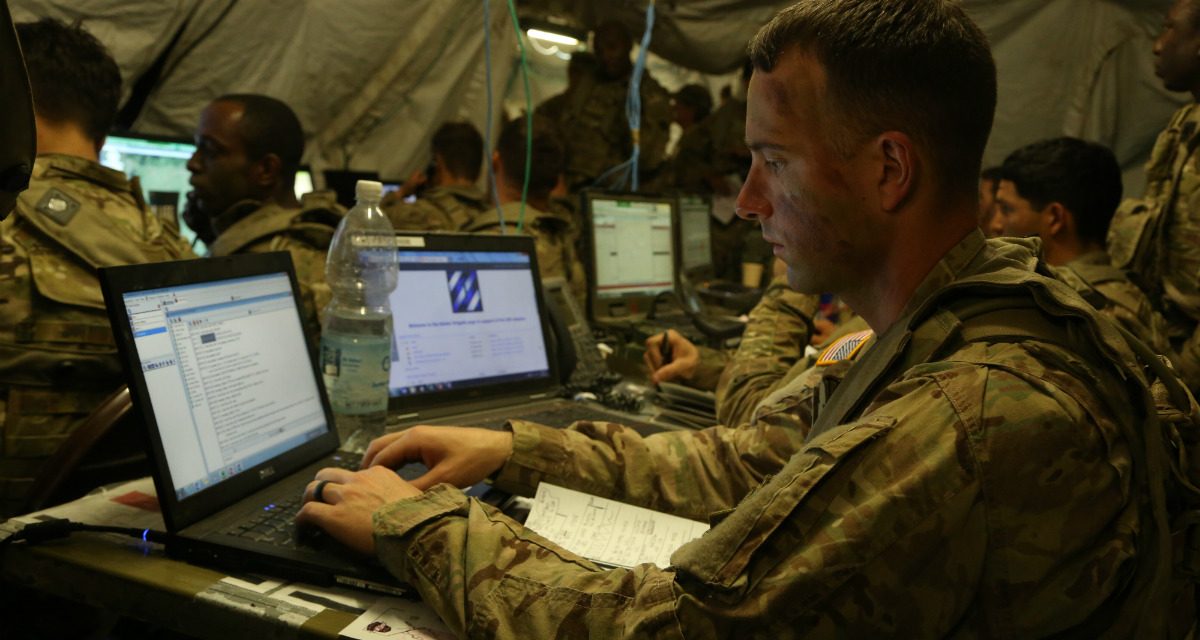 The recently published US Army doctrine manual, FM 3-0: Operations, describes how the Army is adapting its posture to the current operational environment. Emerging regional threats like Iran, North Korea, and Russia require the Army to shift its focus from counterinsurgency to large-scale combat operations. At the same time, the character of war is evolving to battle across multiple domains including land, sea, air, space, and cyberspace. Given these converging changes, the next war the United States fights will be far more dynamic and complex than the counterinsurgency and stability operations in which it has been heavily engaged for more than a decade and a half. This reality creates new problems and requirements for the intelligence warfighting function, and requires intelligence professionals to develop the skills needed to meet these requirements and abandon the concepts, habits, and standard operating procedures learned and practiced over this period.

In counterinsurgency, the insurgent threat has limited land warfare capacities and little to no capabilities in other domains. As strategist Bill Dries has discussed, the dominance that the United States enjoys in the counterinsurgency (and counterterrorism) fight allows for war planning and fighting to be highly centralized and controlled: combatant commanders plan, task, and execute operations using function components. The United States is able to maneuver its joint force largely uncontested. As Dries writes, “With the Air Force and Navy providing air superiority, maritime superiority, theater-wide awareness, and long-range communications, Army and Marine forces move into theater and freely maneuver.”

US counterinsurgency operations have centered on clearing designated areas of threat forces while training and assisting local security forces. These protracted conflicts may require incredible persistence, but they demand little adaptation on the part of friendly forces. As such, operations are highly cyclical. Deployments are regularly scheduled. Missions are conducted from static, fortified bases. This is not to say that counterinsurgency is easy. Limited success in Afghanistan and Iraq alike suggests otherwise. Rather, counterinsurgency’s remarkable complexity lies in the political problem—finding a way to legitimize another government as a third-party actor—more so than the military one.

Counterinsurgency and Intelligence Preparation of the Battlefield

Intelligence Preparation of the Battlefield (IPB) in counterinsurgency is informed by the characteristics of counterinsurgency described above. As such, the IPB process is largely population-centric. Battlespace analysis is human-focused, not terrain-focused. As the Army’s counterinsurgency manual, FM 3-24, states “IPB in COIN operations . . . places greater emphasis on civil considerations, especially people and leaders in the AO [area of operations], than does IPB for conventional operations.” Describing and defining the operating environment focuses intensively on PMESII-PT factors (political, military, economic, social, information, infrastructure, physical environment, and time). Personnel analyze and understand battlespace characteristics like demographics, culture, tribes, and clans as much as they work to understand its terrain features. Counterinsurgency scholar David Kilcullen has noted that counterinsurgency emphasizes the importance of understanding political and cultural factors of the operating environment, and has suggested that counterinsurgents “become the world expert” on the PMESII-PT factors of their respective districts.

IPB in counterinsurgency is also cyclical. Determining threat courses of action is relatively repetitive. The threat’s limited military capabilities constrain its potential courses of action. Though the precise time, location, and target of an attack may vary, the range of possible types of attack generally does not.

Targeting and Collection in Counterinsurgency

Targeting is critical to the “clearing” aspect of counterinsurgency. FM 3-24 refers to targeting as “cutting out cancerous tissue while keeping other vital organs intact,” noting that intelligence drives the process. As a result, intelligence personnel are trained extensively on targeting processes like D3A—decide, detect, deliver, and assess— and F3EAD—find, fix, finish, exploit, analyze, and disseminate. Intelligence professionals have become expert at researching personalities, mapping insurgency networks, and designing intelligence collection plans that enable kinetic “finishing” operations. This training and application is largely specific to counterinsurgency operations and has limited application to large-scale combat operations.

Counterinsurgency heavily leverages two types of intelligence. First, it requires a robust employment of human intelligence. Many have highlighted that the interaction with the local population is critical to painting a picture of the human terrain. As a result, the Army invested heavily in HUMINT assets like cultural support teams. Targeting operations emphasize nonlethal means so that collectors can have access to the target, mining her or him for more information on the threat network.

Second, signals intelligence has also proven important in the targeting process during counterinsurgency operations. SIGINT is used to exploit the enemy’s digital and electronic footprint, and is critical particularly in the “find” and “fix” portions of D3A.

Advantages of Operating in a Counterinsurgency Environment

Another important characteristic of counterinsurgency is its degree of unprecedented interagency cooperation and jointness. In counterinsurgency operations, there is a significant level of visibility and access to information between the tactical, operational, and strategic levels of war. This means that intelligence personnel, even if operating at the tactical level, can enjoy an abundance of products and assets usually reserved for, or at least principally intended for, the operational or strategic levels. For example, a battalion S2 has access to products built by civilian intelligence agencies. Similarly, if a unit takes contact, higher headquarters can often immediately re-task assets to assist them.

In a counterinsurgency environment, the United States enjoys dominance across all domains. The threat does not have the capability to overrun US units. American forces safely enter the area of operations; they often fall in on equipment, procedures, and products that already exist in theater; and they relieve other units with relative ease. Soldiers know generally when they will be deploying. In a large-scale combat situation, none of these things would likely be true.

The character of large-scale combat operations differs dramatically from that of counterinsurgency. Many of the differences emerge from the stark contrast in capabilities between an insurgent and a peer or near-peer threat. These threats have an ability to compete with the United States across the domains of land, sea, and air; the United States does not enjoy dominance as it does in counterinsurgency. As a consequence, the battlefields of large-scale operations are, as the new FM 3-0 describes them, “more chaotic, intense, and highly destructive than those the Army has experienced in the past several decades.” For instance, a modern peer or near-peer like Russia could potentially hack intelligence systems. A threat could also deny US and friendly forces all full-motion video collection in the deep fight, an ability that the United States enjoys in counterinsurgency, with its vast number of surveillance drones—what retired Gen Stanley McChrystal famously dubbed the “unblinking eye.”

Both threat and friendly goals differ greatly between counterinsurgency and large-scale combat. As discussed above, population-centric counterinsurgency operations aim to break the enemy’s will through attrition of its forces (i.e., targeting) and sapping of its primary resource—popular support. Large-scale combat primarily aims to break the enemy’s will through simultaneous attrition of its forces and acquisition of territory, denying the threat any advantage in terrain.

Intelligence operations would look far different in modern great power conflict than they do in counterinsurgency.

First, the IPB process must focus on terrain effects and threat capabilities, not the population. This means that HUMINT collection processes such as detainee operations are less important (and more difficult to employ in a useful way). At the same time, SIGINT and IMINT capabilities become critical to identifying the threat composition and disposition on the battlefield.

Second, targeting is employed far differently in great power conflict than it is in counterinsurgency. Targeting does not center on eliminating the threat itself, but rather the key assets that enable threat capabilities. Likely targets in large-scale combat operations would be ammunition storage facilities. In World War II, a key operation that set the conditions for the Normandy invasion was a targeting campaign called the “Transportation Plan.” In the operation, Allied forces strategically bombed all bridges, railroad centers, and railway repair shops in the days running up to the invasion in order to delay German forces’s efforts to reinforce the Normandy beaches.

Third, the process of intelligence collection and production would differ significantly. In large-scale combat, intelligence must work with less time, less support, and more disruption than faced in counterinsurgency. Professionals should be prepared to conduct intelligence “on the move,” jumping tactical operations centers potentially every twenty-four hours (or less) to prevent destruction by threat forces, standing up and tearing down systems with exceptional expediency. They must also be well trained on analogue systems because of the possibility of hacking or disruption of digital products.

Training in an FM 3-0 World

Organizationally, military intelligence brigades were restructured, their titles changing from “Battle Field Surveillance Brigades” to “Expeditionary Military Intelligence Brigades.” The name is emblematic of their new mission to prepare for great power conflict. They are “expeditionary” in that they can conduct intelligence on the go, jumping TOCs frequently. Some of these units have been re-tasked completely from preparing for counterinsurgency operations in Afghanistan to posturing for a conventional threat. Even units that are still on rotation to Afghanistan must now train for large-scale combat situations. This refocusing is a tough change. The lack of institutional and personal experience in large-scale combat operations means that entire units are often not even re-learning large-scale combat situations, but learning them for the first time.

At an individual level, intelligence personnel must learn to conduct IPB in an entirely new way. Currently, intelligence personnel have acquired an incredible amount of personal and collective memory from counterinsurgency operations. They are experts on Afghanistan and Iraq, collection for counterinsurgency, and targeting operations that aim at identifying and eliminating a network. But many do not know how to conduct IPB in conventional operations. Much of a soldier’s re-learning will occur with more training exercises geared towards large-scale operations, featuring peer or near-peer adversaries. Even more will come down to the individual soldier—her or his attention to new doctrine and disciplined learning of IPB in large-scale defense and offensive operations.

Competition in the digital and space domains (in addition to land, sea, and air) changes the battlefield significantly. Intelligence professionals must understand and assess a threat with unprecedented military capability, potential characteristics (e.g., composition, disposition), and available courses of action. They must also prepare for a fight many of them have never fought before.

At the same time as the intelligence community prepares for this great power conflict, it should be careful not to lose the institutional knowledge acquired from Afghanistan and Iraq. Following any great power conflict has also been a period of instability requiring careful reconstruction efforts. In other words, any large-scale combat operation could likely be followed by stability and counterinsurgency operations. This is the challenge intelligence professionals must meet: prepare to fight the war FM 3-0 describes, hold onto the lessons learned and institutional memory of counterinsurgency, and ensure they contribute to an effective intelligence warfighting function for whatever mission the Army requires.

Caroline Bechtel is an intelligence officer at Ft. Bragg, NC and a 2017 Hertog War Studies Fellow. Follow her on twitter @cbechtel17. The views expressed in this article are those of the author and do not reflect the official policy or position of the Department of the Army, DOD, or the US Government.