The Asymmetric Warfare Group on the Future of War 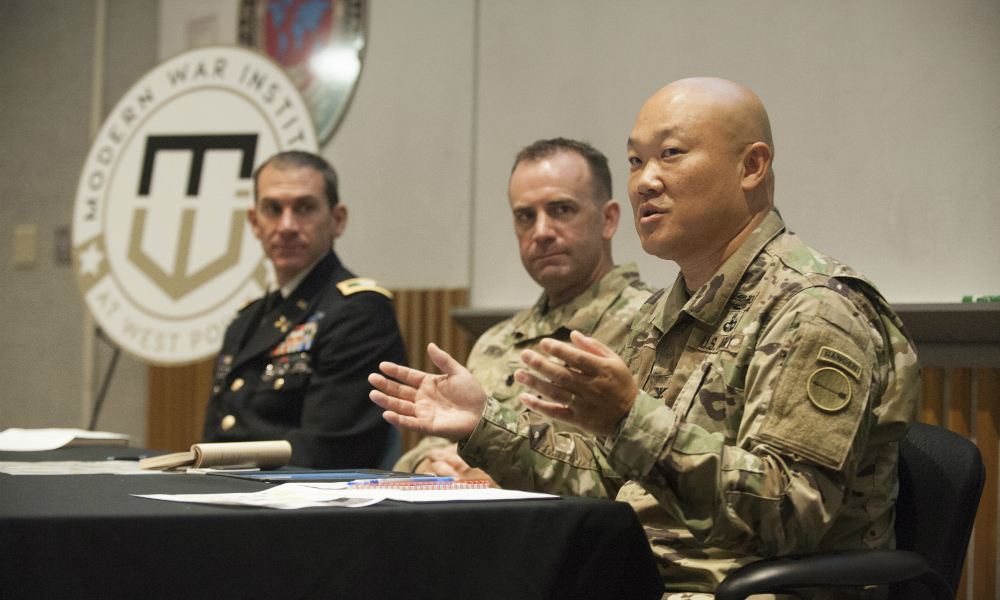 On September 20th, MWI hosted the Asymmetric Warfare Group (AWG) and the Chief of Staff of the Army’s Strategic Studies Group (CSA SSG) to discuss future threats with a roomful of cadets and faculty in Washington Hall. Moderated by MWI Director, COL Liam Collins, the panel discussed the future operating environment cadets are likely to face as well as potential threats.

One of the panelists, LTC Ryan Kendall from the CSA’s SSG, discussed the role the SSG plays in envisioning future conflict scenarios as far off as 2050. COL Mike Loos, commander of the AWG, divided his portfolio into three baskets of threats: current, next, and deep. The panelists discussed the importance of technology in reshaping the current battlefield of cross-domain threats, specifically the ability of individuals to assemble virtually and physically to challenge governments from Ferguson to Fallujah.

COL Loos outlined a number of threats across theaters. In Europe, he described the changing character of warfare there and the advent of a near-peer state competitor, Russia, utilizing non-military as well as military means to carry out a multi-domain “hybrid” battle. In East Asia, he described China’s heavy reliance on R&D and experimentation with new technological capabilities to reshape the threat environment and control its messaging in the region. Countering WMD on the Korean peninsula also presents the U.S. Army with what he called “unique” challenges.

He also discussed the threat of transnational actors such as ISIS and Boko Haram, terrorist groups he said that employ maneuver warfare and defend their urban terrain (e.g. Mosul) using defense in depth techniques.

The AWG provides operational advisory support globally and rapid solution development to the Army and Joint Force commanders to enhance soldier survivability and combat effectiveness and to enable the defeat of current and emerging threats in support of Unified Land Operations. “Consider us as a consultant for the Army,” said COL Loos.

The toughest thing about the future operating environment, according to the panelists, is that cadets as future officers will be required to obey ROE and the laws of warfare whereas their enemies, whether they engage in conventional warfare or nonconventional warfare – cyber, hybrid, etc. – will not.

See photos of the event here.