Blast from the Past: What We Learned by Bringing a Rear-Area Combat Concept from the 1980s to the National Training Center 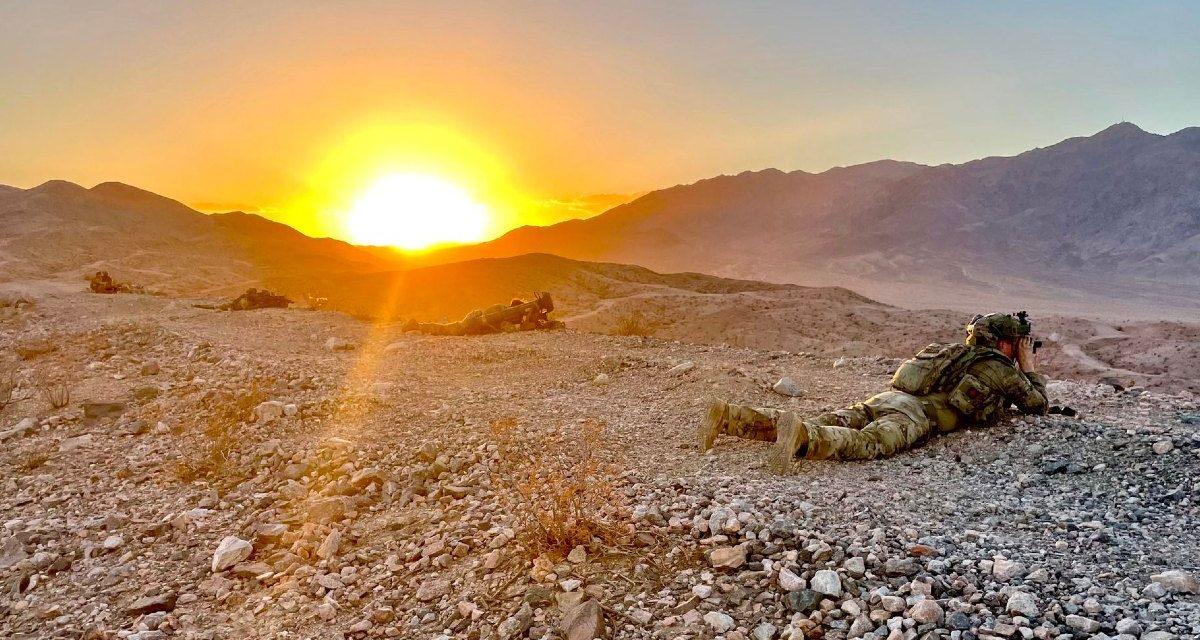 It was a brutally hot out—106 degrees—as Private First Class Myles Baney sat under his camo net, scanning his sector. As he looked toward the horizon through the wavy heat lines in his binoculars, he noticed two vehicles that seemed out of place. Watching this pair of odd-looking vehicles, he sensed something wasn’t right. Without even realizing it, weeks of training suddenly kicked in, and he was quickly getting his Javelin into operation. In the span of five minutes, Baney would destroy three enemy vehicles, singlehandedly sparing the brigade support battalion, the rear logistical headquarters for the brigade, from almost certain destruction. Baney and his unit were part of a larger force tasked with protecting the brigade rear area, and for the soldiers in the logistical rear of the brigade, they sure were glad he and his fellow soldiers were at the right place, at the right time.

To paraphrase journalist Malcolm Muggeridge, new things are old things happening to new people. This was the case in the 56th Stryker Brigade Combat Team’s recent rotation at the National Training Center, during which the brigade was tasked to organize a tactical combat force in support of the exercise scenario. Responsibility for this mission was assigned to a task force—Task Force Paxton—and its experience during the rotation offers important lessons for the Army as it prepares for the future battlefield.

The tactical combat force concept has fallen out of the Army’s lexicon in recent years, but with the flood of lessons learned from Ukraine, it is suddenly relevant again. The concept has its roots in AirLand Battle doctrine from the 1980s. In the days of AirLand Battle, the tactical combat force (in the 1982 Field Manual 100-5, Operations, it was referred to simply as the “combat force”) was designated to defeat a threats categorized as Level III, the most potent threat anticipated in rear areas. A Level I threat consists of a small enemy force that can be defeated by typical units operating in the logistical rear of a large unit. A Level II threat generally consists of enemy special operations teams, long-range reconnaissance teams, and partially attrited combat units. A Level III threat is an enemy force that is beyond the defense capability of the typical units operating in the rear area and any local reserve or response force. During the development of AirLand Battle, doctrine writers analyzed the tactics of Warsaw Pact maneuver formations and realized NATO defenses in the rear area lacked the capability to counter a Level III threat. Thus, the tactical combat force was born.

As the Army reorients from a focus on counterinsurgency operations to large-scale combat operations, the need to address the Level III threat has returned. The war in Ukraine has illuminated the need to address security in the rear area. Commanders must now ensure their rear area combat forces have the capability to rapidly deploy a lethal combat element, in a sometimes vast area of operations, to defeat a potential armor or mechanized threat that seeks to disrupt their logistical operations. Because of the area that must be covered, the tactical combat force needs to be highly mobile and lethal enough to destroy a Level III threat. Having that criteria in mind, Task Force Paxton was able to task organize into small, mobile teams to rapidly maneuver and counter any Level III threat as it emerged in the brigade’s rear area.

While not a typical task for a brigade’s National Training Center rotation, adding the tactical combat force mission set enabled a training repetition for an additional battalion. Most frequently, if a brigade has an undermanned battalion, its manpower might be redistributed to round out other battalions and the brigade staff. Assigning OPFOR (opposing force) elements to act as a Level III threat fundamentally changed how the brigade, the brigade support battalion, and the brigade engineer battalion accounted for security requirements in the rear area. Task Force Paxton deployed to the National Training Center as a battalion (2nd Battalion, 112th Infantry Regiment) with reduced manning. The task force deployed without the battalion’s scouts and mortar platoon, and fielded a reduced battalion headquarters and headquarters company, the forward support company, and a rifle company with its headquarters and two platoons. While light in terms of combat power, the task force was organized into multiple combat and logistical elements to accomplish its tactical combat force mission. These streamlined formations were capable of covering enemy key avenues of approach as the brigade maneuvered out of the logistical support area, through the open desert, and ultimately westward toward the urban centers of Razish and Ujen. Like units during most National Training Center rotations, Task Force Paxton quickly discovered what did and did not work, and constantly refined its task organization in order to defeat the enemy, an OPFOR element named “Desert Rat.”

Task Force Paxton emphasized the importance of operating dismounted Javelin teams to counter an armored formation. Because of the relatively small elements, command and control from the main command post was focused on tracking the fight and sharing information up to the brigade main command post and laterally to adjacent units. Tactical movement and maneuver was largely left to the Arrow Company commander and his platoon leaders, with guidance and direction provided by the battalion commander as needed. This also shaped how the main command post and the combat trains command post, which coordinated sustainment operations, were established. Because of the highly mobile nature of the tactical combat force, and the size of the maneuver elements, the battalion staff focused on shortening the normally labor-intensive military decision-making process. Specifically, the staff utilized the rapid decision-making and synchronization process, which shortens planning because much of the information related to the terrain and enemy is already known and was unlikely to change.

During the initial phase of the operation the Level III threat, Desert Rat, penetrated deep into the brigade’s rear area. Fortunately, as described above, it was stopped by an intrepid soldier who destroyed two enemy armored vehicles and one enemy tank in less than ten minutes before they could mount an attack on the brigade support battalion. In subsequent phases, Desert Rat was able to use terrain to its advantage, slip by an observation post, and conduct effective strikes against the rear area units. While the initial success could be celebrated, these subsequent setbacks afforded Task Force Paxton the opportunity to continue to refine its tactics and mount an effective fight for the remainder of the exercise.

Five primary lessons emerged from execution of the tactical combat force mission during the rotation at the National Training Center. The first was that adjacent unit coordination between the tactical combat force, brigade support battalion, brigade engineer battalion, and brigade main command post is vital to having a clear friendly common operating picture during operations. Frequent communication proved to be extraordinarily important. At the battalion main command post the staff needed to be friendly unit–focused, rather than enemy unit–focused. Map graphics used by the commander and his staff needed to focus more attention on depicting the locations of friendly units than enemy units because of the need to understand what was transiting the rear area. Knowing what was coming and going in and out of the rear area was critical to avoid fratricide and to understand what friendly units could come into contact with the enemy along any route.

Third, the brigade must clearly delineate who is responsible for what in the rear area. In order for the tactical combat force to be successful, the brigade must specify responsibility for the various security tasks required in the rear area to avoid duplication of effort and squandering combat power. During the National Training Center rotation, it became apparent that assigning the tactical combat force sole responsibility for countering the Level III threat and tasking the brigade engineer battalion with countering the Level I and II threats allows each element to more effectively utilize its combat power. The attached military police units assigned to the brigade engineer battalion are more than capable of defeating the Level I and II threats, whereas they would become quickly overwhelmed when attempting to destroy a Level III threat. Conversely, if the tactical combat force has to account for all three levels of threat, its response to the appearance of armor or mechanized forces in the rear area will not be effective.

Fourth, the tactical combat force main command post must be lean, agile, and rapidly deployable. Use of camouflage netting and vehicle-mounted communication systems in place of tents enabled Task Force Paxton to rapidly shift its main command post as needed. The task force could not rely on computer systems to create digital products and execute briefings due to the time required for setup. Instead, a hybrid battle-tracking solution was established combining analog tools—paper maps with plastic overlays—and digital tools like Joint Battle Command–Platform. Operations order briefings were largely done in person over terrain models and over the radio when necessary. Once the battle rhythm was established and setup and tear-down of the main command post was executed a few times, Task Force Paxton was able—even with intense weather and over many miles on difficult terrain—to occupy a new main command post location and establish effective communications with its higher headquarters and its own units in about an hour.

Lastly, and perhaps most importantly for the National Training Center and other combat training centers, incorporating the use of a tactical combat force into scenario design provides a fourth maneuver battalion the opportunity to participate in the world-class training that only these training installations can offer. This is particularly relevant for a National Guard battalion that has reduced manning or is not sourced for a deployment. The tactical combat force mission may appear simplistic, but it still exercises a battalion’s systems and processes and requires commanders to maneuver their forces in a deliberately challenging training environment.

Lieutenant Colonel Gordon R. Kinneer currently serves as the state mobilization and readiness officer for the Pennsylvania Army National Guard. He has held various staff and command positions within the 56th SBCT and recently completed a tour as the bilateral affairs officer at the Office of Defense Cooperation, US Embassy Vilnius, Lithuania. He is slated to assume command of 1-104th Cavalry, 2IBCT, 28ID on October 1, 2022.

Lieutenant Colonel Eric B. Ponzek is the commander of 2-112th Infantry (Paxton), 56th SBCT. His last assignment was as the 28ID battle major and he executed the last 56th SBCT National Training Center rotation in 2018 as the S-3 for 1-111th IN (Associator), 56th SBCT. He has held various command and staff positions throughout 56th SBCT.