Breaking Ice in Darkness: Reflections from an Ice Pilot’s Winter Mission to the Arctic 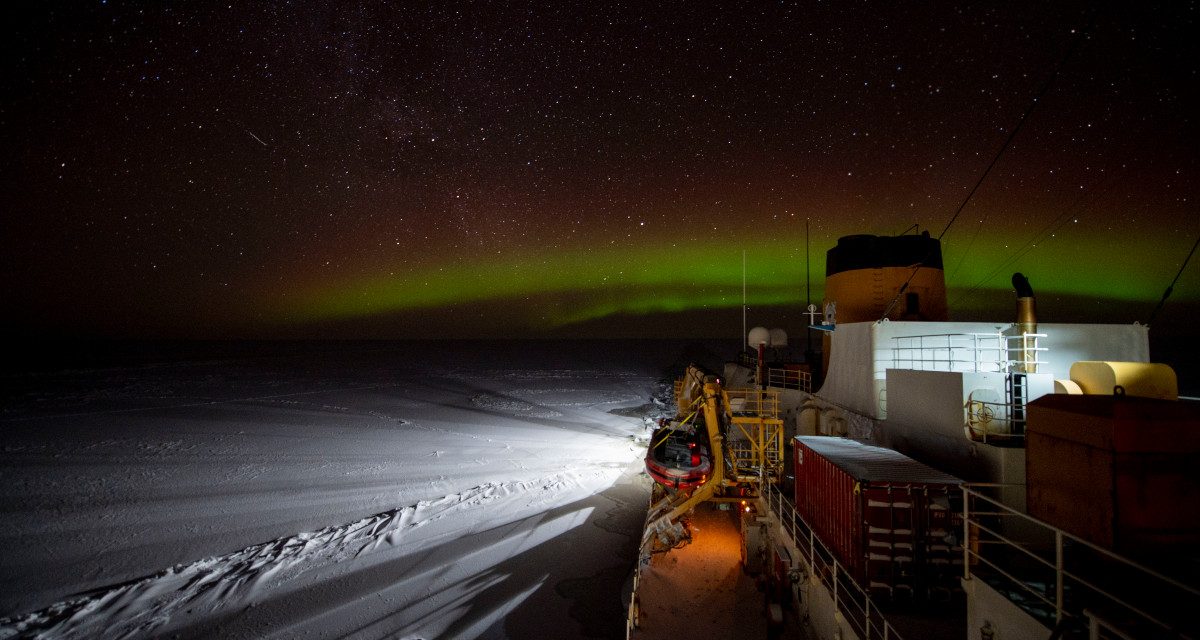 Above latitude 66 degrees, 33 minutes north, we did not see the sun rise above the horizon for weeks. Icebreaking in nearly complete darkness demanded heightened situational awareness from cutter personnel. Operating safely in the Arctic winter presents unique challenges that must be considered as the United States surges forces to meet emerging mission demands in the region. My experiences are based on seventy-eight days underway during Coast Guard Cutter Polar Star’s Arctic West Winter patrol from December 2020 to February 2021. As the nation’s sole heavy icebreaker, Polar Star’s primary mission was geopolitical in nature: projecting power and presence into the Arctic.

Navigation and standing the watch during open-ocean steaming has many well-known rigors but ice-choked waters escalates the degree of difficulty. Watch officer decisions are heightened in stakes and significance, and ultimately more dangerous in the ice. One wrong decision can result in a crippling casualty to the rudder and screws. Polar Star’s standing orders list patience, protecting the rudder and screws, and choosing the path of least resistance as three of the most important rules to icebreaking. The ten total rules form widely accepted guidelines that provide a useful framework for ice pilots to make tactical decisions in the ice. The Arctic environment, especially in winter, presents additional challenges that must be addressed. These are the most significant:

Low visibility: Typically in heavy ice, two ice pilots work as a team to ensure the safety and efficiency of the mission. One of the pilots is responsible for the immediate tactical maneuvers including rudder and throttle control, while the second pilot assesses the upcoming ice. The increased height of eye from the aloft conning station (105 feet for Polar Star) makes it easier to choose the safest and most efficient route. However, even with powerful icebreaking floodlights, the twenty-four-hour darkness of the Arctic winter often restricts visibility to a matter of yards.

During this mission, our ice pilots operated in reduced visibility, occasionally employing night-vision goggles (NVGs). Radar served as another important tool for ice pilots. However, radar on this mission was also limited to a certain useable range—generally less than a mile—in the ice. It could only reveal a handful of ice ridges and leads away from the cutter before the feedback was unreliable. Furuno and Rutter, two companies that manufacture radar systems, offer digital signal processing units that improve the usefulness and usable range of radar in the ice, but unfortunately Polar Star was not equipped with such a system for this mission.

Because of the extreme darkness and low profile of the ice, it was incredibly difficult to distinguish ice features in the distance. When transiting in open ocean, the NVGs allowed the watch to identify areas of ice coverage and safely avoid entering without the proper qualified members. Frustrations rose when the cutter encountered particularly large ice ridges or areas of difficult ice, forcing the cutter to back and ram for extended periods of time, which would have been apparent in better visibility conditions. Additionally, these areas may be under immense pressure, causing the track behind the cutter to close rapidly. On one occasion, Polar Star was trapped in such conditions for approximately four hours. During this period, the ice under pressure was shattering against the hull, causing increased noise inside the skin of the ship and adding stress to the crew. In daylight, we could have gone around.

Exhaustion: Patience was tested each watch. Winter conditions resulted in more snowfall and hurricane-force winds. Snow added to the friction on the ice, causing the cutter to slow. Winds prompted a need for more aggressive rudder angles and engine commands. Cold temperatures in the engine rooms, to the point where snow built up on the deck plates, led to delays in engine and turbine startups. The constant maintenance and repairs to the propulsion systems paid a heavy toll on the members of the engineering department. While driving, an ice pilot constantly monitors speed, throttle positions, rudder angle, heading, track behind the cutter, and the ice directly in front. This process reinforced the need for two ice pilots to rotate throughout the watch.

Moreover, periods of rest between watches were not always peaceful. Low temperatures and high winds resulted in particularly hard, refrozen ice that screeched along the hull for days at a time. This meant sleep deprivation for a majority of the crew that lived below the waterline. As the Coast Guard and other agencies develop plans for new icebreakers and ice-capable ships, locating berthing areas away from hull at the waterline should be a crucial design consideration.

Despite such challenges, Polar Star fulfilled all mission objectives on a successful and record-breaking patrol. Again and again, we chose the path of least resistance through the ice and practiced patience. When the ice conditions outmatched our diesel engines, we brought powerful turbines online. When the crew needed rest or the engines required maintenance, the cutter stopped in the ice or provided holiday routine. While COVID-19 did not allow the crew off the cutter in port calls, morale events (like video-game tournaments, movie nights, and weekly trivia) provided time to decompress and enjoy a break from routine.

Polar Star succeeded in projecting a US maritime winter presence farther north than any US surface vessel in history, reaching 72°11’N on December 25. The mission provided valuable experience for both current and future ice pilots. Members of the UK’s Royal Navy also gained important Arctic experience. Lastly, while this patrol occurred exclusively in Arctic ice, many of the basic principles of icebreaking could be applied to other areas, such as the Great Lakes, Antarctica, or Greenland. I personally found this patrol to be incredibly rewarding as I learned from the crew who plowed through every challenge just as the cutter cut through massive ice ridges in the daunting, dark winter of the Arctic.

Ensign Madeline Colwell is a 2020 graduate of the United States Coast Guard Academy, earning a commission as an officer in the United States Coast Guard. She is permanently assigned to Coast Guard Cutter Healy, a medium icebreaker, and completed the Arctic West Summer 2020 patrol that was cut short due to a crippling electrical fire. Following AWS 20, Ensign Colwell was assigned temporary duty to CGC Polar Star, the nation’s sole heavy icebreaker, for the Arctic West Winter 2021 deployment from December 2020 to February 2021.