Broken and Unreadable: Our Unbearable Aversion to Doctrine 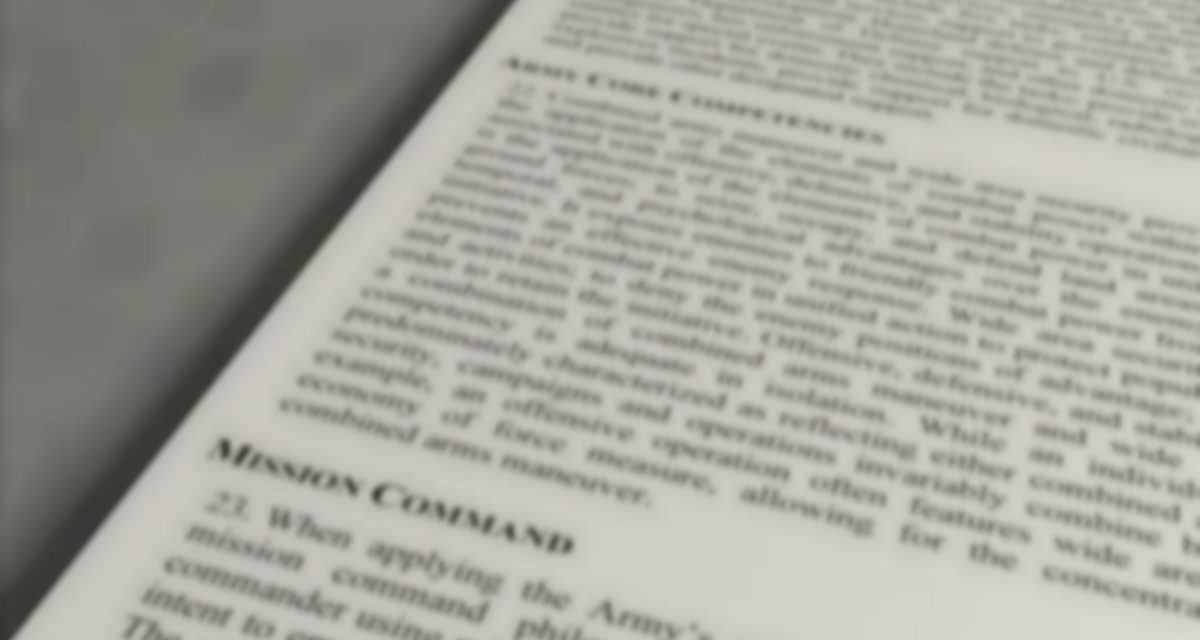 “A serious problem in planning against American doctrine is that the Americans do not read their manuals, nor do they feel any obligation to follow their doctrine.”
– Soviet observation during the Cold War

In 2016, when the University of Kansas opened the doors to the new DeBruce Center, the main attraction was a display of two simple, yellowed pieces of paper, stored behind a pane of electrochromic glass. In 1891, when tasked with creating an indoor game that would occupy the young men of Springfield College during an especially bitter New England winter, Dr. James Naismith framed the rules of a game that would one day capture a nation (and increasingly, the world): basketball. In 1898, Naismith brought his game to the Heartland, where he planted the roots of the modern sport as the first coach of the Kansas Jayhawks.

Basketball has always been a part of my life. From summers on the concrete playground to winters in the gym, I long ago lost count of the hours spent playing the sport. I knew the language of the court. I understood the guiding principles—the fundamentals—that shape how we play the game. I knew every dimple in the leather of the ball and how to make it respond to my will. Yet, in all those years, I’d never once read those rules. Not once. But I knew them—every last one of them.

Basketball, it seems, has much in common with doctrine. We teach it. We talk about it. We profess its virtues. We just don’t read the rules. We’re often so proud of the fact we don’t read our own doctrine that we joke about it (“it’s only a lot of reading if you do it”), while at the same time mocking peers who admit to not reading doctrine as TOADs (“totally oblivious of all doctrine”). The problem with all of that? The costs associated with doctrinal ignorance are measured in blood and treasure. The time to admit that you don’t know the difference between ADCON and OPCON is not when your soldiers are going hungry in a remote outpost.

Only last year, Maj. John Spencer penned an illustrative exposition on doctrine, defining not just what it is, but why it’s so important to us as a profession. Within the margins of his narrative, he railed against those who cast doctrine in a negative light, using the words of Frederick the Great—“War is not an affair of chance. A great deal of knowledge, study, and meditation is necessary to conduct it well.”—as a rallying cry to embrace the intellectual pursuit of doctrine.

Yet, still, we don’t read doctrine. Why? Well, it’s complicated.

First, there’s a lot of it. When the Army launched the Doctrine 2015 initiative, more than 500 field manuals were in print. A key goal of that initiative was to reduce not just the quantity of manuals produced, but the length of those manuals, as well. Two years later, the library of Army field manuals is noticeably smaller. However, along the way we added a number of Army Doctrine Publications (ADPs), Army Doctrine Reference Publications (ADRPs), and Army Tactics, Techniques, and Procedures (ATTP) publications. We might have fewer field manuals today, but much of that same information is now spread across more—and often longer—publications.

While having 500 field manuals in print at any given time seems somewhat excessive, there was a distinct advantage to being able to capture the fundamental principles of sustainment, fire support, or planning in a single publication. I don’t advocate “throwing the baby out with the bathwater,” but I do believe we can find a happy medium where we reduce both the number and length of doctrinal manuals. When it comes to doctrine, the old adage “quantity has a quality all its own” should not apply.

Second, it seems to be in a constant state of flux. At its core, doctrine is defined as the “fundamental principles by which the military forces or elements thereof guide their actions in support of national objectives.” By their very nature, “fundamental principles” ought to be fairly static. Naismith’s 13 Rules remain unchanged after more than 125 years. In one form or another, the principles of war—what we call the “Principles of Joint Operations” today—have held relatively firm over time. Our doctrine, however, seems to change at a whim, as writers struggle to capture the latest operational concepts, emergent threats, or tactics, techniques, and procedures.

That’s not to say that doctrine won’t change, because it will. How much it should change, though, is a matter of debate. The upper tier of Marine Corps doctrine—the capstone and keystone manuals—is a largely stable body of knowledge. While some of the information presented may change in style, the substance—the fundamental principles—are immediately recognizable to Marines of past generations. That level of consistency is something we should strive toward. Tactics, techniques, and procedures change frequently; fundamental principles do not.

Third, the writing isn’t always the best. Despite the Herculean efforts of editors, the writing of most manuals still hovers at the eighth-grade level, lower than your average comic book. That’s not to say that we don’t have good people working hard to produce quality doctrine, but we owe it to ourselves to ensure that doctrine is both compelling reading and interesting. We have an operational narrative that is as rich as it is deep, and that needs to be translated into doctrine that is at least as readable as the latest issue of the Amazing Spider-Man.

We also tend to over-define our terminology. Words in common usage since the days of Noah Webster can find new life—and new meaning—in Army doctrine. Several years ago, I endured an hours-long argument among a group of doctrine writers trying to define the term “asymmetric.” The suggestion—after three full hours of debate—that the group consult a dictionary was not well-received. One need only thumb through the digital pages of ADRP 1-02 to earn an appreciation for how common a practice this has become.

Finally, we come to the “logic maps.” At some point during the writing of ADP 3-0 (the Army’s capstone operations manual), the writing team introduced the idea of a diagram that would map the logic behind the central organizing theme of the doctrine—the operational concept. The logic map was a powerful teaching tool: a single graphic that “walks” the reader through the “big ideas” in the manual. The logic map, however, proved to be yet another impediment to doctrinal literacy. Why read the doctrine when you could just study the logic map? We speak lightheartedly about leaders who are only “PowerPoint deep” on certain topics; now we have people who are just “logic map deep” when it comes to doctrine.

Fortunately, the news isn’t all bad. We still have “touch points” where we learn—often through intellectual osmosis—and practice our doctrine: in schools, during rotations at the “dirt” combat training centers, in warfighter exercises, and, of course, while deployed. Such “on the job” learning is invaluable in a force largely averse to reading its own doctrine. It does, however, come with a down side: the commander who directs his staff to “chop” an element to another unit because he doesn’t know the difference between ADCON and OPCON. That’s just one example of many, and a constant reminder of the importance of reading—and understanding—our doctrine.

We may never have fundamental principles as timeless and enduring as Naismith’s 13 Rules, but that doesn’t mean we shouldn’t work toward that end. Now is the time to take the steps necessary to build a body of knowledge that leaders feel compelled to study and internalize, to challenge and debate. We need to move beyond “it’s only a lot of reading if you do it” and embrace our doctrine. We can get there from here, it’s just going to take a little work. And some reading.

Steve Leonard is a co-founder of Divergent Options, a former senior military strategist, and the creative force behind Doctrine Man!!  He is a founding member of the Military Writers Guild and a frequent contributor to the Atlantic Council’s Art of Future Warfare Project. His writing focuses on issues of foreign policy, national security, strategy and planning, leadership and leader development, and, occasionally, fiction. An alumnus of the School of Advanced Military Studies, he led the interagency team that authored the US Army’s first stability operations doctrine, spearheaded the reintroduction of operational art into capstone doctrine, and wrote the guiding principles for the Army Design Methodology. He is the author of four books, numerous professional articles, countless blog posts, and is a prolific military cartoonist. Follow his writing on his personal blog, The Pendulum, and on Twitter at @Doctrine_Man. The views expressed in this article are those of the author and do not reflect the official policy or position of the Department of the Army, the Department of Defense, or the US government.
Share on Facebook Share
Share on TwitterTweet
Share on LinkedIn Share
Send email Mail
Print Print