You Can Lead, But Can You Plan? Time to Change the Way We Develop Junior Leaders 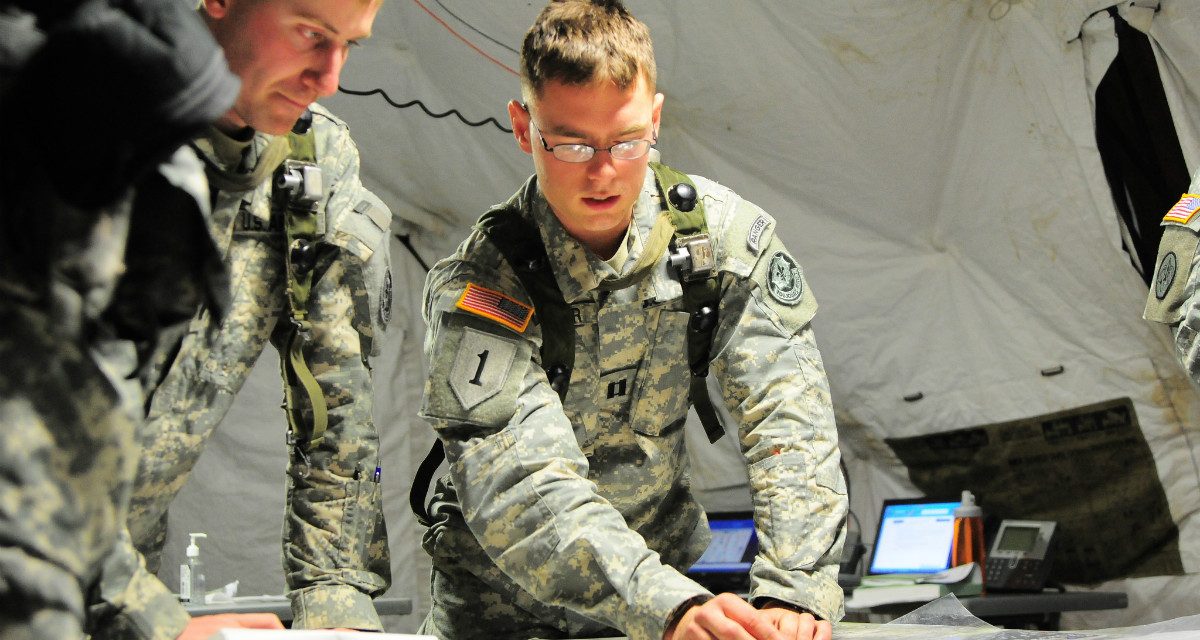 Late one night within the dusty confines of a plans tent in the Rotational Unit Basing Area at the National Training Center, battalion staff gets ready for entrance into the box.  The battalion XO approaches a junior captain and instructs him to provide his staff estimate within the next hour because MDMP is about to start.  All around him the rest of the battalion staff captains pound away at products.  Turning to a peer, the young captain asks, “What’s MDMP?  What’s a staff estimate?”  He’s met with a look of disgust and a question in return. “How do you not know MDMP?”

That situation occurs too frequently within US Army units.  Well-meaning and hard-working staff officers find themselves placed within a primary staff job before completing their career course instruction.  Therefore, they must quickly learn methods for battalion-level planning.  This leads naturally to frustration for the ill-prepared officer and reduced effectiveness for the unit.  Why don’t we seek to formally teach junior officers about MDMP earlier than a career course?  Many lieutenants and junior captains will find themselves responsible for planning on a battalion or brigade staff well before their career course assignment. And yet we don’t adequately prepare them for it.

Mastering the troop-leading procedures (TLPs) is absolutely critical for young officers.  That’s not in question.  However, shouldn’t we also expose our leaders to planning methodologies from the beginning?  We can and should. All too often our junior officers find themselves in positions where even rudimentary knowledge of the military decision making process and design would pay huge dividends.  There are a range of reasons to do so, but four in particular stand out: it would prepare junior officers for staff section assignments prior to or immediately following their time as platoon leaders; it would allow junior officers to see and understand linkages in planning cycles between headquarters; it would enhance the overall professional development of junior officers; and it would serve an important professional development role for instructors, too.

Currently basic officer leader courses (BOLC) identify time in their programs of instruction to teach planning.  This is critical so that lieutenants complete the courses as masters of the troop-leading procedures.  But, why aren’t they exposed to the other two doctrinal planning methodologies—MDMP and design?  Is the expectation that just because lieutenants don’t have a dedicated staff, they won’t need to know how to use these methods?  That seems overly simplistic.

Lieutenants must arrive to units ready to lead and achieve in complex environments.  Yet some won’t move into a platoon leader billet immediately and will serve on a staff until they do.  In those cases, it quickly becomes apparent that they likely have not received the necessary instruction to succeed in these roles.  With little to no understanding of MDMP or design, they are markedly limited in what they can contribute.  Consider the many junior lieutenants who find themselves within a battalion’s S3 section as they await a platoon leader position.  Most are assigned special projects.  What if they arrived with a basic understanding of these methodologies?  They would become immediate assets, prepared to, at a minimum, build baseline products for a staff, and staff officers would need to spend less time teaching these young officers about the process.

The same holds true for post-platoon leaders and junior captains who move up to occupy battalion, and sometimes brigade, staff positions—where they still require an introduction to MDMP and overall planning prior to becoming assets.

But exposing junior officers to all three planning methodologies will not only help them if they happen to be assigned to a battalion or brigade staff. Understanding planning processes and products—and how these products are completed and passed down to subordinate levels—will make them better platoon leaders.  A second lieutenant who understands how mission analysis is completed in MDMP will be better at analyzing aspects at the platoon level, as well as developing better answers to information requirements generated at the battalion level. Exposure to design could also spark a lieutenant to use a portion of that approach during his or her own planning, by deliberately seeking out subordinates’ thoughts, for example.  This leads to stronger team cohesion and overall ownership of a plan.

Along with building officers prepared for staff assignments, early exposure to planning methodologies is the right thing to do for a force truly committed to professional development of young leaders, encouraging interest in planning cycles and methodologies that would otherwise remain dormant until later in their careers.  Army staffs use dedicated planning methods to solve complex problems.  Why not teach these methods earlier in an officer’s career?  As we increasingly deploy units specially designed for advise-and-assist, this becomes even more important, as more of our junior leaders will need this knowledge to help professionalize our partner forces.

Expanding instruction on planning need not even be limited to junior officers. Introducing MDMP to our noncommissioned officers would also serve these NCOs and the Army.  Conceptualizing planning as something only staff members is unrealistic and harmfully restrictive; the more soldiers we have that understand the process, the better the process will become and the better the final product produced.

Critics of this proposal might argue that there is no need to teach MDMP or other planning methodologies to junior officers, who should spend their time focusing on small-unit operations and perfecting their ability to complete the TLPs at their level.  They might say it would be a mistake to add to an already time-constrained program of instruction across BOLC courses, and they will learn MDMP and planning when they arrive to their units.

To be sure, this shouldn’t come at the cost of producing junior leaders with a sufficient grasp of TLPs. But introducing them to planning processes will also contribute to creating better critical and creative thinkers.  ADP 5-0 stresses the importance of these traits for design methodology and MDMP.  The Army should be seeking to identify talented critical and creative thinkers early.  We don’t need lieutenants that are hesitant to participate in planning.  We need them ready, willing, and equipped to do so early in their careers.

During the wars in Iraq and Afghanistan, platoon leaders often owned portions of an assigned area of operations, in which they may have had host-nation forces and perhaps an enabler team or two.  TLPs alone don’t give platoon leaders the tools necessary to succeed in such a scenario. Combining them with specific aspects of design would ensure they solve the right problem and iterate their planning efforts. There is little doubt that future battlefield circumstances will arise in which junior officers’ understanding of planning methodologies will be similarly impactful.

Exposing junior officers to design and MDMP as a part of professional military education will produce an effective return on investment.  The better we plan, the less friction soldiers experience on the battlefield, and the more likely we are to achieve military objectives. And better planning means teaching leaders the full range of methodologies earlier in their careers.

Maj. Ethan Olberding works within the Department of Military Instruction at the United States Military Academy. Commissioned as an armor officer, he has served in armor and infantry brigade combat teams, with operational experience in both Iraq and Afghanistan.