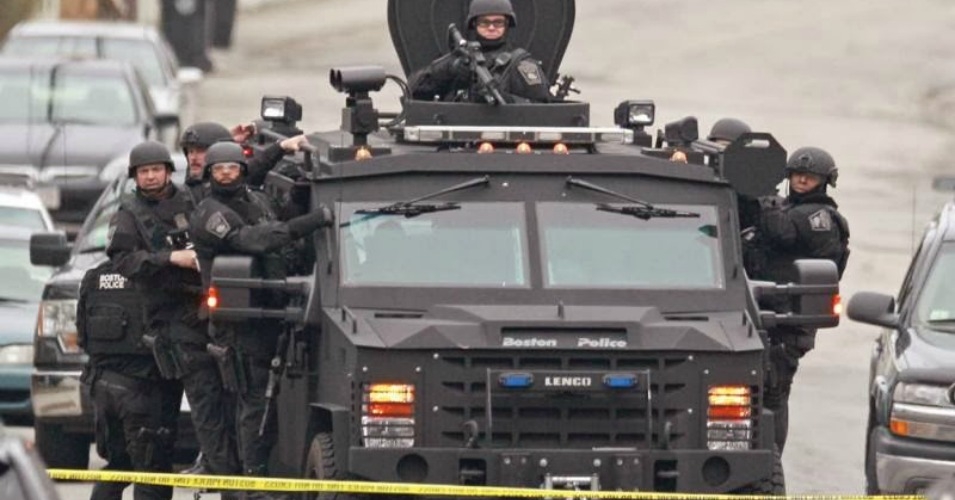 Amid a tense standoff and as gunshots rang out in downtown Dallas, the police department decided to try something new last week: They turned to a small, four-wheeled bomb-disposal robot, armed it with explosives, and assassinated the shooter, ostensibly with minimal risk to officers.

This ended the crisis. But it raised widespread questions about the increased use of military grade technology by police forces. Who can forget the request by the police of Keene, NH (population=30,000) for a military grade armored personnel truck, to guard against terrorists striking its annual Pumpkin Festival?

This appeared to be a manufactured emergency. But in larger urban environments, there are real dangers, as we’ve seen in Orlando and Dallas where military equipment comes in handy. Unlike the police of yesteryear typically only armed only with a sidearm, today’s police officers have access to equipment straight from the battlefield. Depending on one’s vantage point, this is a surefire way to exacerbate tense situations and waste valuable taxpayer dollars (the Bearcat sought by Keene police cost upwards of $200,000). Or it is a fight-fire-with-fire way to respond to a citizenry increasingly armed to the hilt.

While the use of a robot, in this case the Northrop Grumman Remotec Andros, by police departments is not new, deploying it as a lethal weapon is. No American police department or military unit has ever used a robot to kill (the Andros’ previous use in Iraq and Afghanistan was to assist with bomb disposal).

The Dallas Police Department (DPD) essentially engaged in a form of tactical improvisation. Although it worked to resolve the crisis, there were significant risks involved.   DPD’s use of the bomb bot serves to create a dangerous precedent and further blur the line between warfare and policing. “In warfare,” as Rick Nelson, a fellow at the Center for Strategic and International Studies, noted, “your object is to kill, Law enforcement has a different mission.”

While the use of deadly force in the situation in Dallas may have been justified, the acquisition of pricey military equipment by local police forces raises serious cost concerns. With taxpayer dollars stretched, should police departments, particularly those in rural areas be purchasing such expensive equipment? The Keene anecdote is indicative of a much wider national problem: Police departments all over the country are stocking up on military kit at significant cost. The question becomes: Where else could that money be spent? Nobody thinks than an MRAP should be in the hands of a local sheriff. But after recent events, the notion no longer seems so farfetched.

Perhaps most crucially, a more hyper-militarized police force in cities is creating scenarios that are more dangerous for the general public. That goes in spades in protest situations. Policing protests is exceedingly complex and challenging, due to the unpredictability and potential volatility of large crowds – an action-reaction dynamic that the social theorist Donnatella Della Porta argues can spur overreactions and a carving out of the moderate middle. Yet, providing security is a critical part of the job for any police department. The presence of police in Kevlar-helmets and armed with military-style assault weapons and tanks serves to make protestors feel more fearful and threatened, creating a kind of spiral dynamic and provoke the very thing the military equipment is meant to prevent: violence.

By dressing for war, police officers are signaling their willingness to fight protestors, not keep them safe from, say, sharpshooters, rioters, or rogue cops.  In the aftermath of the Ferguson protests, in which a wide range of military equipment was frequently used on protestors, President Obama ordered a full review of police militarization. This resulted in some restrictions on the type of equipment that the Pentagon can distribute to police departments; armed helicopters and grenade launchers are now officially off the menu. Additionally, police departments now must prove that their officers are trained in the usage of these weapons and demonstrate that they are in some way necessary. But loopholes still remain. There are still no restrictions on the amount of weaponry that individual departments can purchase. Nor is there any restriction on how these weapons are used.

A mantra we heard from post-surge Iraq was that the military was doing what local police officers should have been doing – patrolling neighborhoods, getting to know locals, and so forth (skeptics of the 2006 COIN manual say it should use kinetic force to kill insurgents, not break bread with locals). A corollary to this predicament is that America’s police forces increasingly mirror its military counterparts. But cops are not military personnel; they are designed to protect and serve their citizens, not fight them.

President Obama, in his address to Dallas, said that “in this country we don’t have soldiers in the street.” That is increasingly looking like a pre-“active shooter” America. While police officers certainly deserve every possible advantage to accomplish their task, there is a fine line between providing security and hyper-militarization, which with the widespread usage of military equipment is being crossed repeatedly. If police departments have access to military-style weapons, it should be strictly monitored and dependent on need. Police should not treat their local communities as battlefields. Otherwise they risk exacerbating the very threat they are arming themselves against.

Jillian Kutner, an intern at the Modern War Institute, is a student at Wellesley College.