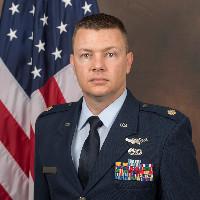 Maj. Chalie L. Galliand is the operations officer of the Modern War Institute at West Point. An Air Force officer, he is currently assigned as a rotating faculty member and assistant professor on assignment from the United States Air Force Academy as an exchange instructor. Prior to joining MWI, he taught in the Department of Physics and Nuclear Engineering. Maj. Galliand serves as a faculty advisor for cadets conducting space and air warfare-related research. In addition, he serves as the primary point of contact for cadets interested inter-service commissioning opportunities to the US Air Force.

Prior to commissioning in the US Air Force, he was an infantry sergeant in the US Marine Corps, providing security and ceremonial support to United States Naval Academy. Maj. Galliand is a 2008 graduate of Kent State University where he earned his commission through ROTC. His experience includes space system acquisitions, aircraft maintenance, and major weapon systems acquisitions. Prior to being selected to teach at West Point, he served as the director of complaints resolution at the Air Force Life Cycle Management Center. His responsibilities included managing the complaints case load for the center, as well conducting inspections and evaluating exercises.

He holds a master of science degree in space studies from American Military University and is a graduate of Squadron Officer School and the Air Command and Staff College.