Checking Putin: How to Counter Russia in Ukraine 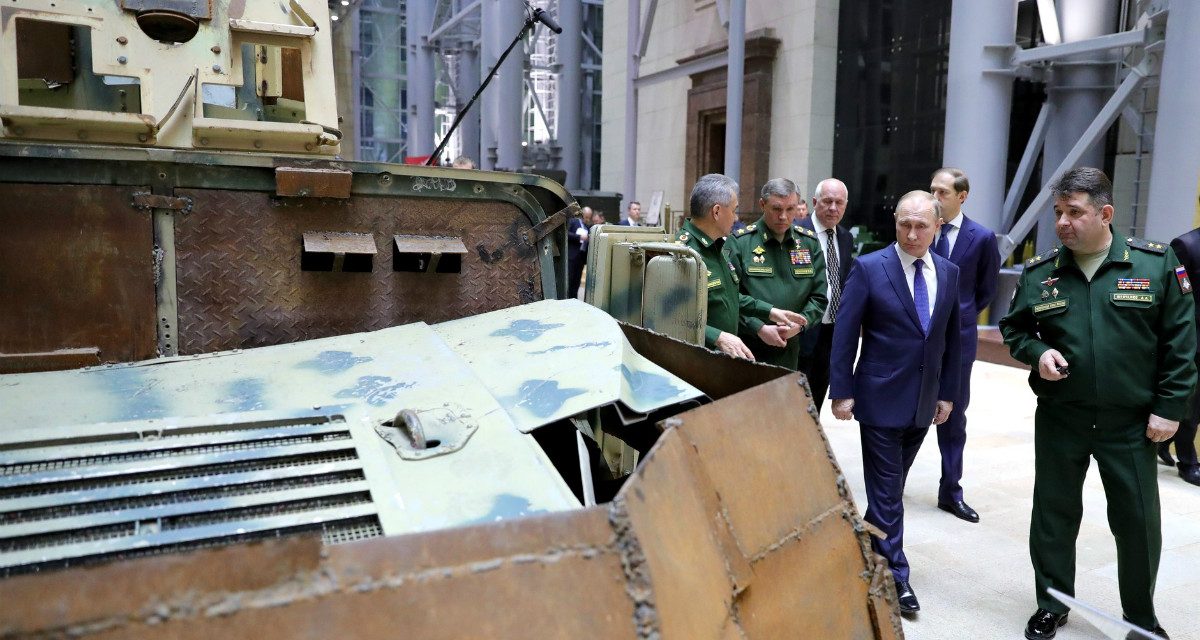 As Russian forces lay siege to Kyiv, the West appears impotent to take action beyond economic sanctions. Despite the explicit understanding in NATO that Ukraine falls outside its mandate, there remains a significant risk that the war will spill over the borders of Ukraine’s NATO neighbors, such as Poland. There will be millions of displaced people and tens of thousands of deaths, serious economic costs, and a sense that the continent has reverted to a pre–Cold War state of instability.

The United States and Europe seem to hope that international censure and the costs of a protracted war will eventually convince Russian President Vladimir Putin to pull back. But those who imagine that sanctions alone will inflict sufficient pain on Russia to make Putin back down are likely to be disappointed. One reason is that sanctions also inflict pain on those who employ them; this fact will be felt even more acutely if the United States and its European allies ban imports of Russian oil and gas, given that Europe gets a quarter of its oil and more than 40 percent of its gas from Russia. In any case, hope, as military planners are fond of repeating, is not a course of action.

With that in mind, the administration of President Joe Biden should now be asking the military for a range of options to counter the Russian invasion and to prepare for its aftermath. A menu of such options should include cyber, electromagnetic, and information operations. It should also include practical steps to aid a post-invasion resistance movement.

US assistance should include cyber and electromagnetic operations targeting Russian forces in Ukraine. From the weeks that Russian forces spent massing on the Ukrainian border, US and British intelligence agencies will have put together a fairly accurate order of battle, probably down to the level of each of the hundred or so battalion tactical groups—fighting formations of six hundred to one thousand troops, accompanied by air defense, artillery, and logistics capabilities.

In cyber, as in the physical world, attack is usually the best form of defense, and the United States’ cyber doctrine of “defend forward” should lead it to defend Ukrainian networks by stopping attacks at their source—that is, inside Russian networks. Electronic and cyberattacks would also involve selectively disrupting the command-and-control nodes of Russian units on Ukrainian soil—the systems that enable these units to communicate. Such attacks would involve more than intermittently shutting these systems down. They would instead aim to create ambiguity—a perception that Russian forces are not where they are supposed to be, and that Ukrainian forces are everywhere.

International norms for the employment of cyber network operations have yet to be formally established, but in the current situation the United States can make a clear distinction between cyberattacks launched against the Russian homeland and those directed against Russian military forces violating Ukrainian sovereignty; it should view the latter as fair game.

The greatest risk is that of escalation. A full-scale cyberwar would be hugely destructive—something that both Russia and the United States would want to avoid. US policymakers should repeat this as an explicit red line to Putin to deter him from turning a tactical cyber campaign into mutually assured paralysis. Alternatively, because cyber operations are notoriously hard to attribute and because their intermittent use in support of resistance operations could lie beneath the threshold of Russian detection, the United States could choose not to claim ownership.

There are indications that Russian morale has been flagging from the outset, suggesting that a consequential share of the Russian Federation’s soldiery does not share its leader’s desire to punish Ukraine. The inevitable turnover of personnel that occurs during the lifecycle of an occupation force will likely bring with it a greater portion of conscripts who generally lack the training, maturity, and discipline required to fight a successful counterinsurgency. They are less likely than regular soldiers to take the trouble to do the small but burdensome tasks that help keep you alive in such an environment. They are more likely to succumb to grief and anger following the loss of their comrades. And they are more likely to overreact to provocation, with results that will undermine their cause. Insurgencies tend to be particularly nasty wars that bring out the worst in people. None of this bodes well for the morale of the Russian military, especially among the ground forces that have borne the brunt of Russian casualties.

A concerted information campaign focused on Russian military personnel in Ukraine would help stoke misgivings about the value of their cause, thus giving life to Napoleon’s dictum that in war moral factors far outweigh the physical. Here the United States could provide the training and technology to enable members of the Ukrainian resistance to mass-text Russian troops in their locale with messages that highlight the futility of their cause, the opprobrium of the world, and the likely fate that awaits them and their comrades. The offer of financial reward for desertion, which Ukrainian President Volodymyr Zelenskyy announced early on, is a great start.

A second line of effort would focus on the Russian public—especially those with relatives among the Russian forces in Ukraine. There are a host of themes well suited for such an audience, but most should involve stark images of the war. Admittedly, stirring protest in an authoritarian country such as Putin’s Russia is not guaranteed to achieve the desired effect, but Russian mothers have proven in the past to be a powerful political bloc.

The final line of effort would target Russia’s political and military elite—with the theme that Putin is destroying Russia. With an economy in free fall, and Russians waking up to a new national identity as an international pariah, this should not be a difficult message to propagate. A few Russian oligarchs and lawmakers have already criticized the invasion openly, and as with all information campaigns, initial impetus is all important. Washington now needs to hammer this message home by every means available.

Invading a country is one thing; occupying it is quite another. This is, of course, a painful lesson that the United States learned in Iraq as well as in Afghanistan—a place from which Russia should have learned the same lesson. Eight years of war with Russia, and increasingly close relations with the West, have led to a strong feeling of national resolve among the Ukrainian people. Evidence of this has been seen in the fight put up by Ukrainian forces from the outset of the invasion. If, as seems probable, the Russian military will defeat that of Ukraine, it will find itself sitting on the proverbial powder keg.

Historically, two conditions are necessary for an insurgency to flourish: popular support and a safe haven which doubles as a source for logistical support. Ukraine has both. Ukrainian national resolve appears unshaken, which augurs well for a nascent resistance movement. As for the second condition, no counterinsurgency campaign has been completely successful in sealing off access to a crossborder safe haven: not the French in Algeria, the Americans in Vietnam, Afghanistan, and Iraq, or the British in Northern Ireland. Ukraine has thousands of kilometers of border, much of which abuts against NATO territory. The Russians will not be able to stop the flow of aid to a resistance group across these borders; the only such danger comes from the possibility of Ukraine’s neighbors forbidding the United States from using their territory to support a resistance movement. The time is now for Washington to get assurances from the four countries that share a border with Ukraine that each will continue to support Ukrainian resistance even if it transitions from being a largely conventional defensive fight to a protracted insurgency.

Since resistance fighters are likely to be outnumbered in every engagement, they need more than small arms or antitank weapons to give them the ability to engage the Russians outside the range of the latter’s weapons. The United States should focus on supplying the resistance with cutting-edge weapons that give the operator this standoff ability while best countering Russian strengths. Man-portable antitank and antiaircraft missiles have been making the news, but US assistance should also include drones such as the TB-2, which are capable of penetrating Russian air defense systems, and loitering munitions that can search out and destroy precision targets several miles from the operator. Even simple kamikaze drones, such as the relatively inexpensive Switchblade, which has a range of ten kilometers, would be an ideal weapon to provide to the Ukrainian resistance.

The United States also needs to prioritize increased shipments of Javelin antitank guided missiles, one of the few weapons capable of defeating the reactive armor of Russia’s T-90 tanks. The same goes for the latest model of the famed Stinger antiaircraft missile system, which will give insurgents the ability to shoot down fast-flying fixed-wing aircraft.

Doing Nothing Is Risky, Too

The risk of escalation remains ever present. The Russians might respond by striking across the borders of a NATO country to eliminate a safe haven, thus triggering Article 5 of the alliance’s founding treaty. Or Putin could launch a full-scale cyberattack on US financial systems on the rationale that the United States is more dependent on such systems than Russia, and that in any case, Russia has little more to lose economically. Or Russian troops in Ukraine might start committing widespread atrocities against civilians in retribution for acts of resistance. The United States must anticipate these possibilities and develop contingency plans—some of which may simply involve unequivocally messaging Putin about the consequences of taking such actions. In weighing these risks, US policymakers need to keep two thoughts foremost in mind.

First, previous confrontations that resulted in the use of physical force against Russia have not led to escalation. One example is an attack by pro-government forces in Syria that included Russian contractors on an outpost manned by Arab and Kurdish forces, which were backed by US personnel and firepower—a confrontation that reportedly ended with up to three hundred dead among the attackers. Another example came three years earlier, when a Russian warplane was shot down by Turkish forces along Turkey’s border with Syria. Of course, both these incidents involved tactical decisions made with the justification of self-defense, and neither involved Russian troops on home soil, as Putin insists on describing Ukraine. Nevertheless, they both prompted the Russians to seek closer cooperation. And although the stakes may be higher in Ukraine than in Syria, it is unlikely that even Putin seeks direct armed confrontation with the United States. US policymakers should make clear what the United States intends to do—and by implication, where it intends to stop.  Regardless, planners must, of course, be prepared for the worst.

Secondly, policymakers must decide whether the risk of taking determined action now is greater than the risk of taking none. Putin’s past record would suggest that it is not. If Russia’s invasion of Ukraine escapes substantial——and sustained—punishment, it will have terrible implications for global norms, international peace, and US national interests.

Andrew Milburn retired from the Marine Corps as a colonel in 2019 after a thirty-one-year career as an infantry and special operations officer. His last position in uniform was deputy commander of Special Operations Command Central, and prior to that commanding officer of the Marine Raider Regiment and Combined Special Operations Task Force–Iraq. He is the author of When the Tempest Gathers and a cohost of the Irregular Warfare Podcast. He tweets at @andymilburn8.