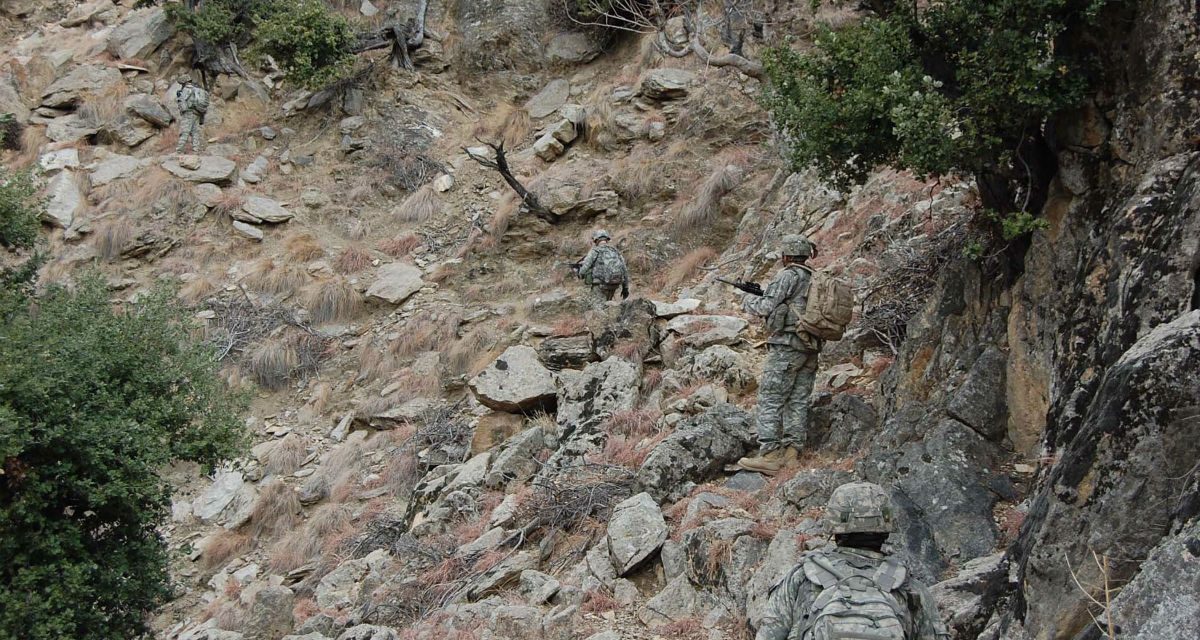 That’s how Lt. Col. Matthew Myer described the complexity of the region in eastern Afghanistan where he commanded an infantry company a decade ago. Nuristan’s jagged mountains formed high ridgelines that separated the valleys—and the fiercely independent people who inhabited these valleys’ villages.

Myer, at West Point to accept the Alexander Nininger Award for Valor at Arms, spoke at an event hosted by the Modern War Institute on September 28. He was joined by his former company first sergeant from that deployment, Command Sgt. Maj. Scott Beeson, and Staff Sgt. (ret) Ryan Pitts, a member of Myer’s company who was awarded the Medal of Honor for his actions during the Battle of Wanat.

Ten years on, the three panelists reflected on the mission they were given, the immense challenges presented to them by the terrain they fought on, the Taliban members they fought against, and the population whose support they worked tirelessly to win.

Arriving in Afghanistan in 2007, the battalion took over responsibility for a number of outposts strung across Nuristan and neighboring Kunar province’s valleys. Throughout the deployment, Myer’s Chosen Company—and the other companies in 2nd Battalion, 503rd Infantry Regiment—would find itself engaged in some of the fiercest fighting of the long war in Afghanistan. Not long after the company took over responsibility for the area, Taliban fighters staged a large attack against an outpost—which US soldiers called the Ranch House—defended by just twenty-two of the company’s paratroopers. Attacks against these outposts would continue, culminating for Chosen Company in the Battle of Wanat, a fight in July 2008 in which around two hundred Taliban members attacked a group of American soldiers and a small contingent of Afghan partners. The fight would become one of the deadliest battles for US forces during our long war in Afghanistan.

(Col. Bill Ostlund, the director of the Department of Military Instruction, commanded Chosen Company’s parent battalion during that deployment and moderated the panel. He sat down this summer for an episode of The Spear and reflected on the Battle of Wanat to mark the ten-year anniversary. You can listen to it here.)

But despite the many difficulties of that deployment, all of the panelists agreed that the challenges they faced taught them a lot. Asked by an audience member about the training that he and the rest of the company underwent prior to the deployment, Pitts said that what sticks out to him was the importance of cross-training. No matter their job, every member of the company had to be able to take on other responsibilities at a moment’s notice—whether those of a radio operator, a machine gunner, or even a medic. “We practiced with each other constantly,” he recalled. “I practiced on the radio. We stuck each other with IVs.” He credited that cross-training for creating an important degree of adaptability in their unit that was vital to the company’s battlefield performance. Pitts was wounded during the Battle of Wanat, and that cross-training played a part in his survival. “The soldier who put a tourniquet on my leg wasn’t a medic,” he said, “but he saved my life.”

Myer reflected on a different lesson that deployment taught him—a sobering one about the limits of US military power, especially in missions like the counterinsurgency one he and others were given in Afghanistan. “You can do all of the COIN stuff right, and still not be successful,” he said. The rugged terrain in Chosen Company’s area of responsibility isolated the people who lived there, “and they wanted it that way,” Myer said. “It doesn’t matter how much help you give or how much pressure you apply—or even that we could offer more prosperity . . . if they don’t want to be connected to the government, it won’t work.”

Perhaps the most salient lesson of Chosen Company’s deployment wasn’t one that the panelists discussed, but one they embodied. War unites those who fight side by side. The closeness that results is most acute when the challenges faced together are severe, and it doesn’t disappear when soldiers leave the battlefield. The bond shared by a former company commander, his first sergeant, one of his soldiers, and his battalion commander was apparent while they spoke. And it is a bond unique to members of the profession of arms.

Myer, Beeson, and Command Sgt. Maj. Scott William Stockard—a platoon sergeant in Chosen Company during that deployment—also sat down with MWI to record an episode of The Spear during their visit to West Point. Be sure to check back next week so you don’t miss it.