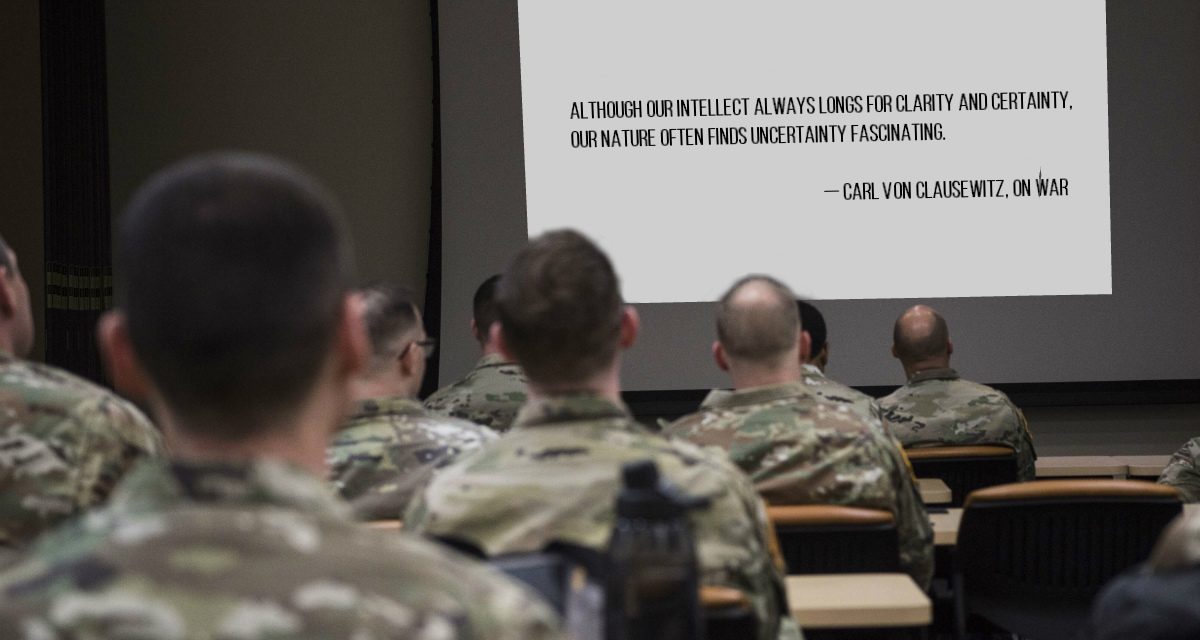 Editor’s note: All quotations from Clausewitz’s On War in this article are drawn from the edition translated by Sir Michael Howard and Peter Paret.

Although our intellect always longs for clarity and certainty, our nature often finds uncertainty fascinating.
— Carl von Clausewitz, On War

Every time I read another armchair strategist comment on the contemporary irrelevance of Clausewitz, I’m left shaking my head. In many ways, reading On War is like reading the Bible: literal interpretations of the text often lead readers to misinterpretations of the deeper, often more thought-provoking ideas underpinning the writing. Recognizing and understanding the context of Clausewitz’s magnum opus is essential to developing an understanding of the concepts within. Context is everything.

It’s often said that Clausewitz is the least read, most quoted of the classic military theorists. His writing isn’t as pithily quotable as Sun Tzu or as provocatively diabolical as Machiavelli. It is steeped in metaphors, written in the years after the Napoleonic wars as Clausewitz struggled to grasp a concept that defied the science of his time. Its very essence permeated On War, from his metaphorical expressiveness to the ubiquitous concept of friction. While other theorists failed to grasp the underlying cause of the unpredictable nature of war, Clausewitz devoted more than a decade of his relatively short life to defining what is contemporarily recognized as complexity, and its inherent and inevitable impact on war.

Clausewitz’s ability to synthesize the nuances of complexity into On War underscores both its enduring value and its eternal struggle. Defense analyst Alan Beyerchen notes that On War “grapples with war’s complexity more realistically than perhaps any other work,” but also attributes the omnipresence of complexity in On War as the single factor that “makes his work so significant yet so difficult to assimilate.” Furthermore, Clausewitz exhibited a fundamental comprehension of the complexities of war best defined in terms largely foreign at the time: “On War is suffused with the understanding that every war is inherently a nonlinear phenomenon, the conduct of which changes its character in ways that cannot be analytically predicted.”

As Clausewitz repeatedly revised On War, he undoubtedly developed a deeper understanding of his own insights on complexity. His evolving theory of war was counterintuitive to the linear, reductivist nature of thought that dominated science from the time of Newton. As a result, Clausewitz relied upon the metaphor to bear the burden of proof.

Clausewitz begins On War with three increasingly sophisticated, yet prominently nonlinear, metaphors to define war. The first of these metaphors, the Zweikampf (literally, “two-struggle”), is introduced in Chapter One of Book One of On War:

War is nothing but a duel [Zweikampf] on a larger scale. Countless duels go to make up war, but a picture of it as a whole can be formed by imagining a pair of wrestlers. Each tries through physical force to compel the other to do his will; his immediate aim is to throw his opponent in order to make him incapable of further resistance. War is thus an act of force to compel our enemy to do our will.

With this first, most basic definition of the nature of warfare, Clausewitz delves into one of the fundamental concepts of complexity: interaction (Wechselwirkung). War, he explains, is not “the action of a living force upon a lifeless mass but always the collision of two living forces.” The metaphor of two wrestlers is an ideal representation of complexity, where “the bodily positions and contortions that emerge . . . are often impossible to achieve without the counterforce and counterweight of an opponent.

As Clausewitz begins to expand his theory of war to encompass the role of policy (Politik), he invokes his second classic, oft-quoted definition: “War is merely the continuation of policy by other means.” In the process of arriving at this definition, Clausewitz calls upon the metaphorical image of combustion to characterize the relationship between politics and war:

The political object—the original motive for the war—will thus determine both the military objective to be reached and the amount of effort it requires. . . . The same political object can elicit different reactions from different peoples, and even from the same people at different times. We can therefore take the political object as a standard only if we think of the influence it can exert upon the forces it is meant to move. . . . Depending on whether their characteristics increase or diminish the drive toward a particular action, the outcome will vary. Between two peoples and two states there can be such tensions, such a mass of inflammable material, that the slightest quarrel can produce a wholly disproportionate effect—a real explosion.

Clausewitz’s use of this distinctly nonlinear metaphor defines the “parameters that determine fundamental regimes of behavior in [a complex] system.” The prevailing political conditions, not the initial political objective, determine the military methods utilized; in war, the link between ends and means is fundamentally dynamic, a definition that contrasts the static relationship fostered by most theorists.

In eliciting this metaphorical relationship, Clausewitz illustrates two of the basic precepts of complexity: the role of feedback in a complex system and the adaptive behavior that defines dynamic complexity. Clausewitz’s assertion concerning the finality of war is indicative of the Prussian’s recognition of the existence of both reinforcing (amplifying) and balancing (stabilizing) feedback in his evolving theory of war. His description of the chameleonic nature of warfare reflects an understanding that, ultimately, the conduct of any war affects its very character, and “its altered character feeds back into the political ends that guide its conduct.”

Finally, Clausewitz draws on his most complex, yet essential, metaphor: the ubiquitous trinity (eine wunderliche Dreifaltigkeit). In military theory, few other representations of the nature of war are so often debated with such diverse opinions. Yet, no other element of Clausewitz’s writing is as representative of the complexity of war:

As a total phenomenon its dominant tendencies always make war a paradoxical trinity—composed of primordial violence, hatred, and enmity, which are to be regarded as a blind natural force; of the play of chance and probability within which the creative spirit is free to roam; and of its element of subordination, as an instrument of policy, which makes it subject to reason alone. . . . Our task therefore is to develop a theory that maintains a balance between these three tendencies, like an object suspended between three magnets.

The trinity is commonly misperceived as a static triad representative of the forces that influence the conduct of war. For Clausewitz, the points are not passive, but dynamic attractors; the metaphor is another illustration of complex interaction. Clausewitz uses the trinity to confront “the chaos inherent in a nonlinear system sensitive to initial conditions [emphasis added].” A steel pendulum suspended between three interactive magnetic points will move in a predefined pattern, but the precise motion of the pendulum cannot be mathematically predicted due to variances in the initial conditions. As in war, “anticipation of the overall kind of pattern is possible, but quantitative predictability of the actual trajectory is [impossible].”

As Beyerchen himself notes, it is unlikely that Clausewitz possessed the foresight to predict the advent of complexity theory. He did, however, perceive and articulate “the nature of war as an energy-consuming phenomenon” that existed within an environment of innumerable, dynamically interactive components. Furthermore, through the use of metaphors, he defined the fundamental elements of complexity: sensitivity to initial conditions, interaction between interdependent variables, the presence of feedback cycles, and the ability of a system to spontaneously adapt to changes in the environment.

Clausewitz noted with a paradoxical sense of irony, “Everything in war is very simple, but the simplest thing is difficult. The difficulties accumulate and end by producing a kind of friction that is inconceivable unless one has experienced war.” Clausewitz further understood that “countless minor incidents—the kind you can never really foresee—combine to lower the general level of performance, so one always falls short of the intended goal.” In his struggle to illustrate the elusive and complex nature of war, Clausewitz was only able to complete Chapter One of Book One before his untimely death in 1831. The daunting task of interpreting and communicating his vision of war fell to his wife, Marie, who set upon “securing and shaping his legacy” almost immediately following his sudden and painful passing. Her painstaking efforts to preserve his writings, though largely underappreciated and understudied, provided the West with its seminal treatise on war.

Had Clausewitz ridden into Baghdad with Task Force 1-64 Armor during the Thunder Run or witnessed the incredible sacrifice on Roberts Ridge during Operation Anaconda, he would have undoubtedly recognized the ubiquity of “friction” on the field of battle. Watching the Syrian civil war devolve into a proxy war waged against one of the world’s most brutal terrorist regimes, he would have noted that even the simplest of enemies can have a profound influence on the nature and character of conflict. But, nearly two hundred years after his death, his only counsel comes in words that echo across time. We study On War for one simple reason: his exploration of the nexus of complexity and war knows no peer. And as the prosecution of war becomes increasingly susceptible to the nuances of complexity, Clausewitz’s relevance only grows with time.