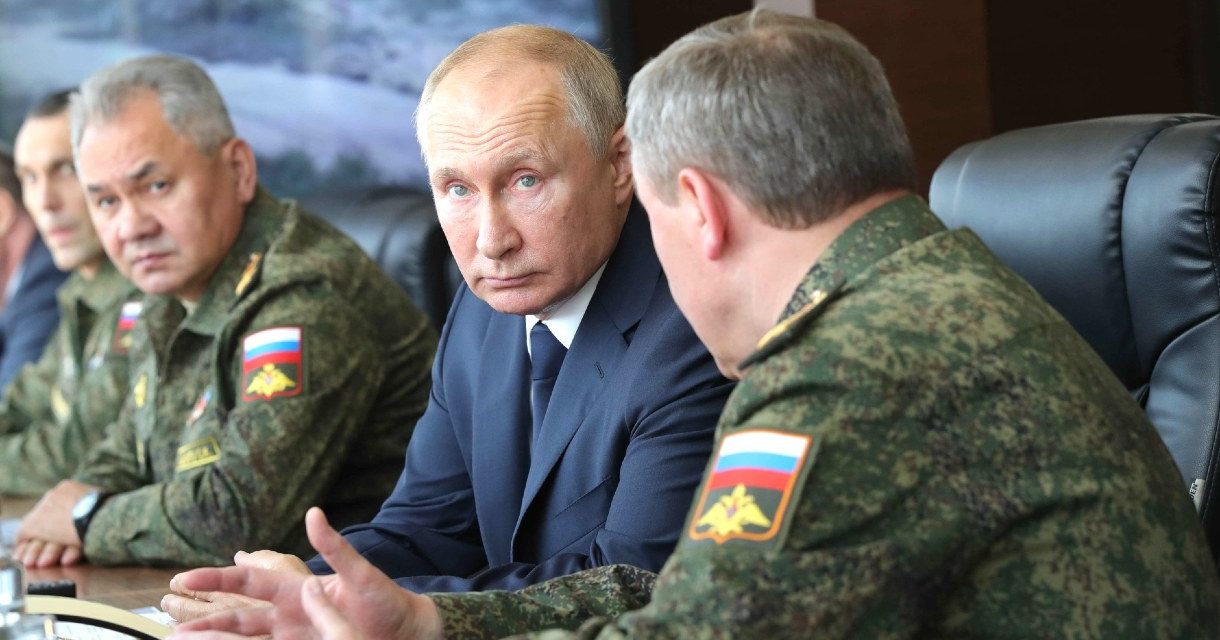 Last week, US lawmakers in both the House and Senate agreed on a final version of the National Defense Authorization Act. Among the sweeping changes to national defense policy is a new, robust plan to confront China that might include major investments in the US Navy. If the bill becomes law, it will further cement a strategic shift toward preparing for great power competition and robust military deterrence.

Does such a bill point the United States in the right direction? On November 4, 2020, the Modern War Institute hosted the fourth annual USMA Class of 2006 War Studies Conference. Like the previous iterations, this event brought together more than two dozen experts from across the national security community to generate ideas about how to address pressing challenges, like great power competition, facing the United States.

The timing of the conference—the day after an historic presidential election—was coincidental. However, it offers important context for considering the ideas that emerged from the conference. The national security problems the participants discussed are not going away in the near future. The next administration, and likely several administrations after that, will cope with the same challenges.

The conference theme was “Coercion and Competition: How the United States can impose costs and disrupt adversaries without resorting to war.” The theme was inspired by the 2018 National Defense Strategy, which explicitly named China, Russia, Iran, and North Korea as the principal threats to American security, while also recognizing the need to focus on strategic competition short of armed force and beyond the military domain. Each of four panels focused on the unique aspects of the national security challenges associated with one of these countries, with a final, fifth panel that tied them together and sought to explore a successful path forward for the United States.

What advice did this year’s panelists have for securing American interests in the face of these diverse threats? Despite their different backgrounds and expertise, there was a remarkable degree of consensus. Across a wide range of problems, topics, and possible solutions, three themes in particular consistently emerged throughout the conference: the need to identify the limits of American power, the need to diversify the policy toolkit and seek creative solutions, and the need to understand the domestic politics and internal divisions that might weaken our adversaries.

Far from being a concession or step toward defeat, recognizing limits is fundamental for allocating resources in any successful strategy. Taking action without a clear and realistic idea of what can and cannot be achieved risks wasting valuable resources.

Nearly every panel touched on the idea that American strategy must better acknowledge the limits of its goals and capabilities. Panelists made this point most explicitly with respect to North Korea, where they stressed the need to recognize that Kim Jong-Un’s achievement of a minimally credible nuclear deterrent places stark limitations on American ambitions. This fact should shape how the United States approaches all its goals with respect to North Korea. It essentially removes military options from the menu of nonproliferation tools. But, as Ankit Panda argued, it also creates space to focus on other pressing issues, like regional arms control and economic policies.

The subject of limitations was less pervasive during the conversation about China. Nonetheless, several panelists argued that American interests with respect to China are “real but limited”; while our two countries may have many disagreements, the only interest vital enough to risk war over is access to markets. This may put the United States at a serious disadvantage when it attempts to coerce China or make gains when economic access is not directly at stake, at least on issues that are of vital interest to China. As Josh Shifrinson noted, limited interests demand a limited strategy. Threats to use military force are more credible when they are tied to existential interests. One danger, then, arises if it is unclear who has more at stake in a disagreement.

There is an additional limitation defining our relationship with China even within the economic realm. We may want to believe that it should be easy to lure allies away from further economic dependence on China, but, as Sheena Greitens argued, there is real global demand for some of what China offers. If China can provide goods or services to partners that the United States and its allies are either unable or unwilling to provide, that places a major limitation on US leverage in the region—with implications for how the United States should focus its efforts.

Limitations were less obviously major factors for the experts on the Iran and Russia panels. In fact, these conversations seemed to focus more on squandered opportunities and advantages than any clear disadvantages of American strategy.

The final panel, however, offered an important warning about the failures of old approaches or mindsets, which themselves may have limited American thinking. Nadia Schadlow argued that global events over the last decade have demonstrated the need to move away from the idea that things like liberalism, globalization, and technology will uniformly work in the United States’ favor. A failure to recognize the limitations of strategies that rely on such assumptions will not serve Americans well in the future.

Coming to terms with past and present limits of American strategies requires developing new policy tools or devising new ways to use existing ones. This was a major theme of the 2018 National Defense Strategy, and one that the panelists took to heart.

As a whole, advice from panelists recognized that if the goal is to avoid war, military tools might not be the most effective tools. Most focused on the need to develop creative ways of using American economic might. John Park and Susan Thornton stressed the importance of focusing on access to global markets and removing dependency on China as powerful incentives for North Korea. Meanwhile, Thomas Graham and Nina Jankowicz argued for revisiting our sanctions regime on Russia to pursue a more flexible and targeted approach, along with capitalizing on the global strength and appeal of dollar-denominated trade.

Another recurring argument with respect to diversifying the American toolkit centered on renewing our approach to regional partners. This is particularly important when it comes to dealing with China; because China prefers to work bilaterally, the United States can put more pressure on Beijing by working with partners to set norms and rules multilaterally. Several panelists also noted Iran’s success at building a network of regional proxies and partners throughout the Middle East, and bemoaned the United States’ limited efforts to do the same. As Sanam Vakil argued, demonstrating the United States is isolated is an important part of the Iranian strategy, so a more successful strategy of carrots and sticks to strengthen regional partnerships could go a long way toward undermining that perception.

Lastly, panelists pointed to the resilience of NATO as a tool for deterring Russia. However, rather than focusing on nuclear deterrence, Cynthia Roberts and Alexander Lanoszka suggested additional strategies to take advantage of American and allied strengths. These include restructuring or modernizing conventional forces, strengthening intelligence, surveillance, and reconnaissance capabilities. The most likely scenarios that threaten NATO partners—hybrid warfare—are also best addressed multilaterally.

One more theme that came through the conversations at the conference was the existence of important domestic divides within each of these countries. These internal divisions create valuable opportunities for the United States.

Some of the most prominent divisions are present in the weaker adversaries, Iran and North Korea. In Iran, Vakil stressed that while there is unity around the regime’s goals, there is much debate between different camps about how to achieve them—with some more skeptical of the United States and international engagement than others. Treating Iranian elites as homogenously anti-American hardliners limits American options. Beyond Iran’s internal politics, Christopher Bolan also pointed out the need to reevaluate broader, regional divisions, such as the relative threat posed by Iranian-backed Shia groups and Sunni extremism.

The North Korea panel identified similar domestic rifts as undermining the Kim regime. Instead of an ideological division, though, there is a substantial subset of North Korean business elites whose commitment to the regime and its goals may be contingent on their continued financial interests. Even the most entrenched dictators cannot remain in power if they lose support of their main constituency, and if Kim loyalists can be convinced that their financial fortunes lie elsewhere, the United States can gain substantial coercive leverage.

The United States can also take advantage of cleavages in Russian domestic politics. Like Kim Jong-Un, Vladimir Putin must also maintain support of key constituencies to stay in power. He relies on a large base for support, though, and this support seems contingent on continued success in discrediting democratic institutions in places like the United States. As a result, panelists urged that protecting and strengthening American domestic institutions might be the best way to undermine Russia as a threat. Putin has also been successful at exploiting ties to ethnic Russian communities in other countries. If those ties weaken, it could change his strategic calculus—potentially increasing the incentive for military action abroad.

Interestingly, domestic politics did not feature prominently during the discussion of China. Of course, that does not mean there are no domestic political issues in China that can be exploited. Indeed, Sheena Greitens stressed the immense amount of resources China has devoted to developing a strong surveillance state—and the consequences this has had globally. However, if there is relative unity when it comes to ideology and strategy within the current Chinese regime, that may complicate American efforts to weaken the regime’s influence.

Looking to the Future

The overarching message for the day was to encourage American policymakers to embrace change and new ways of thinking. Recognizing new constraints can lead to innovative ways to circumvent them. Leaning on new policy tools can yield surprising results and develop new strengths. And looking at adversaries in new ways can reveal important weaknesses and opportunities.

The final panel reinforced this message of looking for success in new or unexpected places. Some, like Emma Ashford, argued that the United States must adopt a radically different mindset that views both war and competition as not means to an end but ends themselves to be avoided. Similarly, panelists reinforced the central idea behind the Defense Department’s advancement of the notion of a competition continuum—that forcing states into categories of either ally or adversary might be unnecessarily restrictive, closing us off to the gains we can make through limited cooperation with apparent adversaries. Others stressed the incremental changes that can redirect conversations. Despite the proliferation of jokes at the expense of the new United States Space Force, Michael Horowitz reminded us that this kind of break with prior institutions is often necessary to catalyze new ways of thinking. Even if there is no immediate threat of major space-based conflict, changes like this can redirect attention to the threats we need to prepare for in the future.

This is precisely the value the panelists saw in documents like the 2018 National Defense Strategy, and its parent document, the 2017 National Security Strategy. While reading either today reveals a number of ways that American practice has deviated from the objectives and principles they describe, together these documents diagnosed problems and changed the conversation around American security. In doing so, they can help create a sense of shared purpose that would not otherwise have existed.

We hope that this year’s War Studies Conference has done its small part to do the same. Read more about the conference and watch videos of each panel here.