When the Combat Switch is Broken: The Dangerous Effects of the Military’s Embrace of Energy Drinks 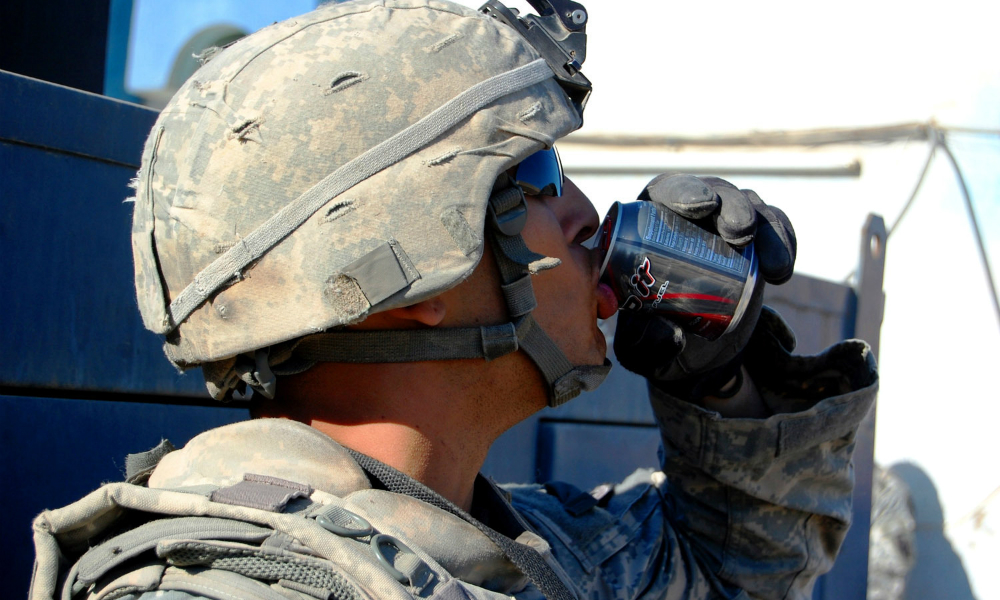 As the sun dips behind the ridgeline high above, the rugged Afghanistan valley through which the dismounted patrol has been moving all day is enveloped entirely in shadow—a reminder of how many long and tiresome hours have passed since the soldiers set out. The patrol was planned after the platoon received reports that there are enemy combatants in their area of operation, but the day has passed with no contact with the enemy. Then suddenly, as the tired soldiers begin to close out the day, they are hit with sniper fire and RPGs. The soldiers immediately seek cover and the fight-or-flight response kicks in. As they begin to engage the enemy, each soldier’s body releases the chemicals needed to out-maneuver and destroy the threat. After a long, intense firefight, as nightfall sets in firmly, the enemy breaks contact and the platoon returns to base.

When they arrive, the soldiers begin to refit their equipment and themselves. Internally, each soldier’s body should be transitioning to a relaxed state and releasing the adrenaline and other chemicals stored up in its muscles. Nevertheless, a number of the platoon’s members reach for the plentiful supply of energy drinks in order to keep them going as they clean their equipment during the late night. Just as their bodies should be decompressing, the active ingredients in the drinks trick their minds into maintaining the elevated state they first entered during the fight. Unknowingly, the soldiers’ bodies begin to cycle through the fight-or-flight mode again because the same chemicals are present in their bloodstreams.

This example is representative of countless scenarios our service members have encountered during our long wars in Iraq and Afghanistan. The extended buildup of chemicals introduced both naturally and by consuming energy drinks can cause harm to a soldier’s physical and physiological state. Researchers refer to this overexerted process as adrenal fatigue. According to this concept, after high doses of caffeine consumption the body goes into a hibernation period. The body’s nervous system becomes overtaxed and the detox period takes longer than normal and may cause dizziness and headaches. Therefore, the platoon members’ bodies never get a chance to detox from the firefight earlier in the day. Their bodies are now on a constant roller-coaster of chemical highs and increasingly longer and deeper lows. Over the next couple of days, leaders in the platoon begin to notice changes in some soldiers’ behavior—increasing mood swings, violent outbursts, irritability, and hypertension. They attribute these behavioral changes to the intense firefight, but in reality, the soldiers are being harmed by their own hands with the help of energy drinks.

Despite popular belief, the most important tool soldiers have in combat is not the M-4. Rather, it is the ability to use their mind—to think clearly and quickly about how best to bring their training and weapons to bear, in concert with one another, in order to destroy the enemy. A soldier’s cognitive ability in combat needs to be unimpeded and decisive. In the late 1920s, Walter Cannon detailed this ability in his research on the human’s fight-or-flight mechanism. He described the process as the body’s response to an acute threat to survival. It is marked by physical and chemical changes, including in the nervous and endocrine systems, which prepare a human or an animal to react or to retreat. During these times, it is critical that a soldier is able to take a decisive action in combat. When functioning normally, the body is essentially able turn the combat switch on—and turn it off again when the threat dissipates. But what happens when this switch is broken?

By early in the wars in Iraq and Afghanistan, the military had made energy drinks available to soldiers who were deployed to theaters of combat. Energy drinks had a long history prior to this, but the military’s embrace corresponded to the explosion in popularity of big names in the industry like Red Bull. The drinks’ main ingredients include stimulants like caffeine and taurine, which activate the central nervous system and make consumers feel alert and energetic. Marketing to military customers would have seemed a simple proposition: energy drinks can heighten soldiers’ physical energy and focus their mental acuity. These benefits appeared to be the perfect solution for soldiers who were looking to get a competitive edge in a “battle of the wits,” where the combatant who out-thinks the adversary survives.

The first shipment of energy drinks sent downrange to soldiers were cans of Rip It—a brand little known among most consumers but familiar to any service member who has deployed in recent years. Before long, coolers full of water brought along on many nighttime operations also had these eight-ounce cans added to them, and they could be found in dining facilities seemingly anywhere US soldiers were deployed. They caught on quickly with soldiers, especially and unsurprisingly with younger men and women in uniform who had been drinking Red Bull and Monster energy drinks at home.

But few soldiers likely considered the downside of drinking the energy drinks, often in increasing quantities. Research has shown that these drinks have caused more physiological damage to soldiers than actual combat, which is why some soldiers I know have taken to referring to them as “silent assassins.”

The Science Behind the Drink

Energy drinks typically contain about 80 mg caffeine and 1000 mg taurine. Marketed to boost a consumer’s (soldier’s) cognitive and physical abilities, some drinks even spiked the charts at a high dosage of 422 mg of caffeine in a single serving. The correlation between the effects of energy drinks on soldiers and the fight-or-flight response Cannon first identified is alarming, to say the least. During deployments, energy drinks’ internal effects are obscured by the existing stress associated with the constant demand for mission readiness.

In his research, Cannon identified the chemical reaction in a person’s body when he or she enters and leaves the fight-or-flight mode. He found that the initial reaction starts in a person’s amygdala, which triggers a neural response in the hypothalamus. The pituitary gland is activated and secretion of the hormone ACTH begins. The adrenal gland (which is key in his study) is activated simultaneously and begins to release the hormone epinephrine. The release of chemical messengers triggers the production of the hormone cortisol, which increases blood pressure and blood sugar, and suppresses the immune system. The initial response and subsequent reactions create a boost of energy—activated by epinephrine binding to liver cells and prompting the production of glucose. 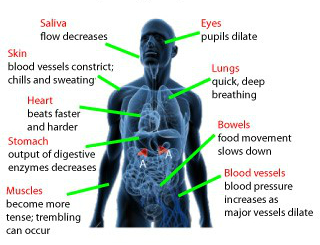 All of this produces a particular set of conditions that soldiers experience when we are in an engagement with the enemy: the acceleration of heart and lung action, paling or flushing, the liberation of metabolic energy sources (particularly fat and glycogen) for muscular action, dilation of the pupils (mydriasis), inhibition of erection, tunnel vision, and shaking. These responses are required during this state in order for the body to increase strength and speed during the conflict. The process can also trigger external responses like the hairs on the neck or arms standing straight up. The overall increased posture and demand on the body add a level of awareness to the soldier. As the engagement ends and danger passes, the need for this enhanced capability subsides, and the body expels these chemicals in a controlled manner.

Now, introduce the consumption of energy drinks into this physical process and the chemical effects it has on a soldier. We find they are similar to a soldier’s fight-or-flight response. The chemicals in an energy drink essentially trick the body and the mind into thinking it is in a defensive posture in order to get the extra amount of energy released. The body allows the caffeine in the energy drink to block the effect of adenosine, a chemical involved in promoting sleep. The blockage causes the neurons in the brain to fire rapidly—as if you were in a firefight.

The brain thinks it is in an emergency and systematically triggers the fight-or-flight response. The chemicals in an energy drink short-circuit the body’s nervous system to achieve that state without actual danger being present. It tricks the liver into releasing sugars in order to produce increased energy. The final stage is a rush of dopamine to the brain causing a relaxed pleasure sensation. At this point, physical manifestations may include palpitations, shaking, restlessness, paresthesia (burning or prickling sensation), ischemia (chest pain), and respiratory distress. Sound familiar? The energy drinks work to mimic the human body’s natural fight-or-flight functions almost identically.  If the old saying is true, that imitation is the sincerest form of flattery, then, energy drinks have paid the highest compliment to the human nervous system.

When the Switch Won’t Turn Off

What happens when the combat switch won’t turn off? Because of the requirement to be ready to perform a mission at a moment’s notice—and in some cases, back-to-back missions—it usually wasn’t until a soldier redeployed that he or she could begin to see the damaging effects of these drinks. Soldiers might then begin to realize they struggle turn off their combat switch and have difficulty adjusting to being out of a combat theater and in a peaceful environment.

In the opening vignette, leaders began to notice changes in some soldiers’ behavior—mood swings, violent outbursts, irritability, and hypertension. They erroneously assumed the changes were a result of the firefight because they cannot see what is going on inside the soldiers’ bodies. However, after a decade and a half of Rip It-fueled war, these changes have become noticeable enough to warrant acknowledgement.

A December post on the Department of Defense’s science blog warned of the dangers of energy drinks, perhaps signaling a change in the military’s approach after years of ready access to energy drinks for soldiers. Still, there are hundreds of soldiers who redeploy and consume these popular energy drinks from local stores. Many are not informed of the danger they pose—not only to combat effectiveness while deployed, but also in the crucial and often difficult process of post-deployment acclimation. As soon as these soldiers consume these drinks, it triggers the same chemical responses and physiological changes they experienced downrange in combat. Their bodies begin to increasingly crave these chemicals in what can almost be equated to a chemically induced high. It contributes to a range of symptoms soldiers often experience when they redeploy—insomnia, depression, hypertension, and anxiety among them. Various activities can help individual soldiers to overcome these challenges without energy drinks, including meditation and exercise, for instance. But the Army can and should also play a role. Reducing the large quantities of energy drinks readily available while deployed would be an important start, but more also needs to be done to educate soldiers on the effects of consuming them. Doing so is vital to maintaining a force fit enough to fight and win our nation’s wars. 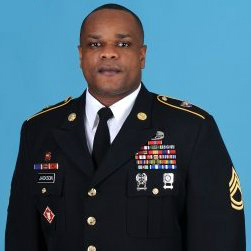 Sgt. 1st Class Eddie Jackson is an instructor in the Department of Military Instruction at the United States Military Academy. He has held a wide range of engineering jobs during his Army career, and has deployed to Kosovo, three times to Iraq, and to Afghanistan.