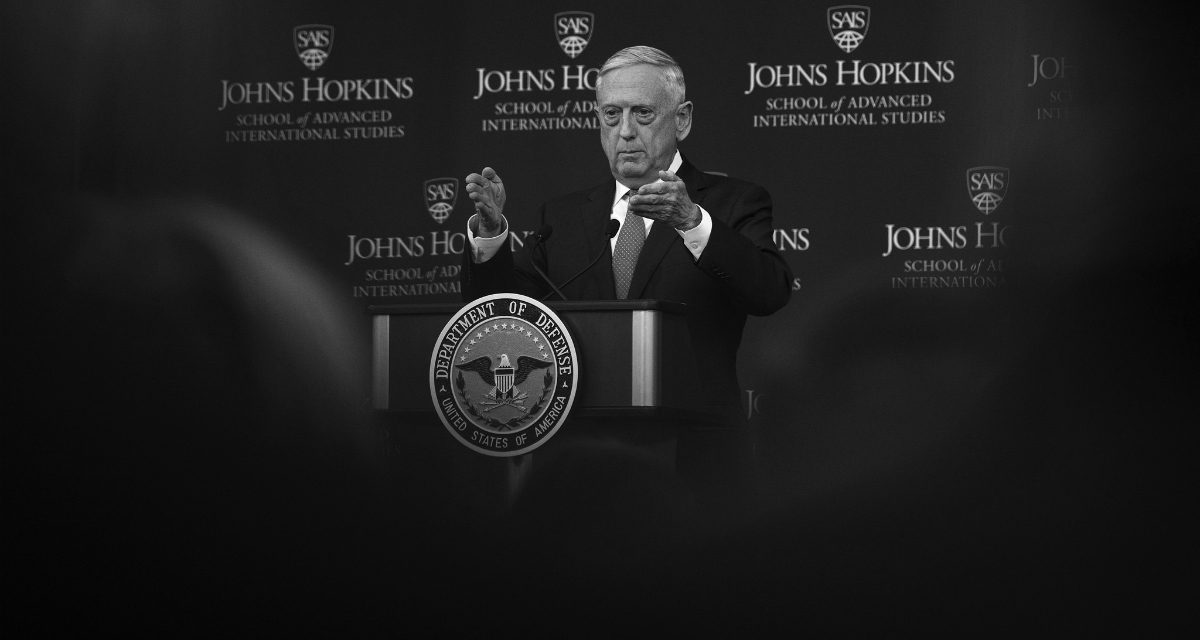 On Friday, Secretary of Defense James Mattis unveiled the 2018 National Defense Strategy. Thus far, it has been relatively well received and is the first NDS in nearly a decade. In the interim, the Department of Defense and three successive secretaries of defense have published various strategic guidance and policy-signaling documents ranging from Leon Panetta’s 2012 Defense Strategic Guidance to Robert Gates’s and Chuck Hagel’s Quadrennial Defense Reviews. Much has changed since the last National Defense Strategy was published in 2008, both in the homeland and abroad, and Mattis’s NDS seeks to describe these changes and formulate a US response—a response which must simultaneously defend and advance US interests in contested environments against increasingly belligerent and capable adversaries.

Unsurprisingly, the NDS echoes much of President Trump’s recently released National Security Strategy. Both identify the rise of China, an increasingly resurgent and active Russia, and a volatile North Korea as threats to the established international order and more importantly, as threats to American interests abroad. The NDS offers a candid assessment of the state of international affairs and the erosion of American power in an environment it describes as “increasingly complex” and defined by rapidly evolving technology that threatens American global domain dominance. The document argues that America has lost many of its competitive advantages and has recently suffered through an era of “strategic atrophy.” In short, it presents a vision that is both troubling and realistic.

Yet despite the clarity with which the NDS describes the operational environment and the rise of “revisionist powers,” the strategy it outlines attempts to maintain the established order and balance of power, whatever the cost. The document is both realistic in its assessment of the future, but also overly hopeful about the US ability to maintain its competitive edge. Among its objectives the NDS calls for “maintaining favorable regional balances of power in the Indo-Pacific, Europe, the Middle East, and the Western Hemisphere,” or in simpler parlance, everywhere on Earth that matters. Yet these goals seem out of step with the rest of the document, which highlights the particularly massive challenges that Russia, China, and others present or will present to US hegemony. The NDS acknowledges the need for “budget discipline and affordability” within the Department of Defense. But the manner in which it does so comes across as incomplete. It doesn’t engage deeply with the question of how the department balances its global priorities against realistic budgetary constraints that will inevitably prove necessary to the long-term sustainability of the American economy as a whole.

At its core, this NDS calls for more resources to be poured into the military to support more deployments and global engagement, all while the Army finds itself still straining under the weight of repeated deployments that have damaged it immensely. It is unclear to what extent the NDS authors believe the US military is underfunded or under-resourced, as it does not quantify what they believe it will cost to compete, deter, and win in the twenty-first century.  Nevertheless, the document seems to suggest that the Department of Defense’s 2017 budget of $582 billion and even greater $639.1 billion in 2018 are insufficient to the task. In fact, the NDS unapologetically calls for “sustained and predictable investment to restore readiness and modernize our military to make it fit for our time” lest we “rapidly lose our military advantage.” Budgetary gridlock has damaged the military, so the call for “predictable” investment is important. Furthermore, “sustained” investment is sufficiently vague to avoid inviting much criticism. But the NDS makes little effort to address hard questions about what we can afford—from large-scale permanent presence to exquisite and expensive new platforms.

Unfortunately, the difficult truth is that there are no easy solutions and the NDS is frustratingly thin on how spending more money will solve or prevent the problems it outlines (or, importantly, those it doesn’t address). More money won’t fix our beleaguered army, composed of mortals that are worn out after years of deployments. It won’t fix the casualty and risk aversion of many of our military leaders. It won’t fix our formations’ readiness (or lack thereof). It won’t stop our ethical fading. It won’t fix America’s reliance on its warrior class to deploy endlessly to support interests that we too often fail to clearly define. It won’t stop the rise of China or the resurrection of Russia. And lastly, it won’t “fix” the American people’s unwillingness to wage unending war.

That is not to say that the 2018 NDS is without merit or thoughtful analysis. It commits the military to representing American “values and belief in democracy” but vows not to “impose our way of life through force,” a lesson clearly learned the hard way in Iraq and Afghanistan. It also reinforces President Trump’s demand that our allies and partners “contribute an equitable share” to “mutually beneficial collective security.” Further, it demonstrates a willingness on the part of Pentagon leadership to challenge the status quo of the entrenched bureaucracy, this time in the form of the Army personnel management, professional military education, and talent management systems. In all three cases it rightly identifies antiquated systems that often fail to achieve the desired results. Yet even here in these relative bright spots, questions remain. How can we responsibly grow the force if we acknowledge that we’re not currently “developing leaders who are competent in national-level decision-making?” Again, these problems seem resistant to quick fixes or an influx of money.

To be clear, this NDS is a step in the right direction. It is coherent and honest, and highlights the very real challenges the United States is currently facing and will likely face in the near future. It communicates to the American people that the era of antiseptic, costless warfare is over—replaced by something altogether more deadly and rapidly evolving than anything we’ve seen before. Where the NDS fails however, is that it doesn’t go far enough. It is seemingly torn between President Trump’s principled realism and Obama-era constructivism, firmly rooted in neither and stuck between high-minded American idealism and powerful adversaries. The NDS highlights new threats and convinces the reader of the erosion of American power, yet stops short of interrogating the assumption that we can maintain our place as the peaceful global hegemon by largely doing more of the same.