Completing the Kill Web: The Multidomain Reconnaissance Troop in the Littorals 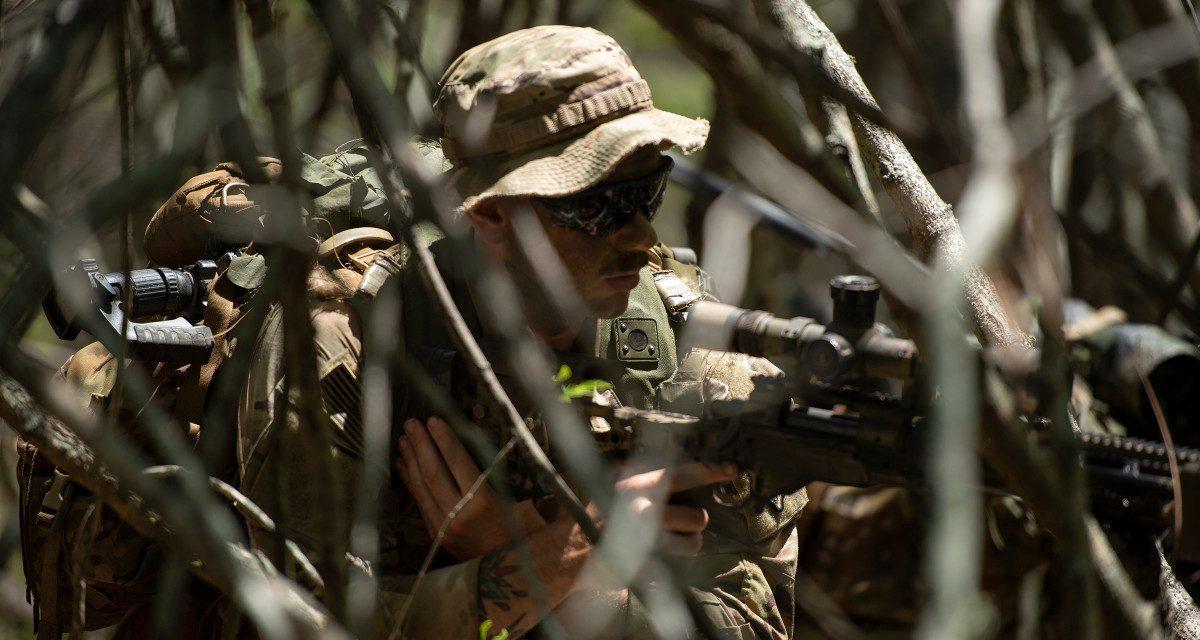 US combat power is massed just out of range of enemy fires, but there it is stalled, with ships and aircraft unable to penetrate the complex web of enemy sensors, missiles, antiaircraft weapons, and other equipment all organized specifically to keep US forces at bay. There is no easy answer to the fundamental question: What mixture of personnel and capabilities is best suited to make it through the web of the adversary’s antiaccess / area-denial (A2/AD) bubble and seize a lodgment for follow-on forces?

Over the course of two weeks in Oahu this August, the US Marine Corps’s 3rd Radio Battalion and 25th Infantry Division’s 2nd Brigade Combat Team tested a multidomain reconnaissance troop concept optimized for this task. The exercise incorporated sensors and shooters from across the joint force to find, fix, and destroy air defense artillery and associated enablers to enable a rifle battalion to seize key terrain in a littoral environment. Key to the success of the operation was the troop’s ability to leverage joint assets and multiple-source intelligence collection to complete the joint kill web. The exercise validated an unavoidable truth: a tactical element that can facilitate multidomain shaping in support of the maneuver plan is crucial in a littoral environment. While there was plenty of healthy friction, as expected with four services participating in the mission, the lessons learned can help shape future force design as the Army continues to modernize and adapt for the future.

The core challenge presented to the joint force is how to set the conditions to gain access to the objective area in a littoral environment rife with A2/AD threats. This is a realistic scenario given the defining characteristics of the Indo-Pacific region, where ground lines of communication are unreliable and the surface-to-air threat is omnipresent. Borrowing from a similar concept—the Marine Corps’s All-Domain Reconnaissance Detachments—we built a task-organized unit we called the multidomain reconnaissance troop, or MDRT, to facilitate the joint targeting of the enemy A2/AD system. The core of the team was an reconnaissance platoon from 2nd Squadron, 14th Cavalry Regiment, the Army brigade’s cavalry squadron. 3rd Radio Battalion’s radio reconnaissance platoon, the UK Royal Marines’ Y Squadron, and the US Air Force’s 25th Air Support Operations Squadron provided SIGINT (signals intelligence) and JTAC (joint terminal attack controller) capability to further increase the team’s ability to detect and destroy.

This cross-domain troop had trained together prior to the operation, which helped minimize friction once the team inserted into the objective area. Getting the MDRT ashore in an environment with denied airspace was nevertheless a challenge. Leveraging the joint force, the troop was embarked on a US Coast Guard cutter, which moved them to a launch point off the coast of the objective area. From there, the reconnaissance team used small combat rubber raiding craft to reach the beach, before moving swiftly into the jungle where concealed movement was tenable. Once the MDRT was ashore, the forces split into three smaller teams of six to seven personnel and established hide sites to observe the enemy positions and begin collecting information. The SIGINT equipment was able to identify the signature of the enemy radar feeding the air defense artillery battery, which cued scouts to move to an observation post where they could collect IMINT (imagery intelligence). The teams were able to take pictures of the equipment to confirm their location, as well as accurately transmit a refined grid to the Fleet information Operations Center (FIOC). Once all of the major air defense artillery systems were located the decision was made to strike them in conjunction with a battalion air assault to seize the key terrain. The team’s US Air Force JTAC coordinated to strike the targets with an AGM-158 air-to-surface missile delivered by a C-17 over 100 nautical miles away. With the neutralization of the A2/AD network confirmed by the MDRT, the criteria was met for the rifle battalion to seize the objective. This full-force rehearsal of a joint kill web resulted in many insights, but two merit discussion here: the structural value of the MDRT as an organic unit, and the role it can play in the joint fight in the Indo-Pacific.

A multidomain reconnaissance troop, while an ad hoc concept, can prove to be a critical enabler at the tactical and operational levels of war. It gives a commander a maneuver element that can collect across the spectrum of intelligence, which in turn allows for more refined targeting and more accurate reporting. This is the fundamental essence of reconnaissance—intelligence collection in support of tactical operations—and both SIGINT and ELINT (electronic intelligence) assets should be treated as such. Pairing these capabilities with proficient ground reconnaissance specialists enables collection and maneuver while reducing the risk of compromise, and even affords a limited capability to fight for information. Units must possess these capabilities organically, however. Too often, SIGINT and ELINT assets are added as enablers at the last minute to a maneuver element. This relationship leads to a lack of trust, as well as a poor understanding of both the capabilities and, equally importantly, the limitations of the equipment. The teams must be mobile and flexible in their insertion methods, matching the technique to the terrain and enemy situation. Vehicle-mounted collection equipment has significant advantages over man-portable equipment, but the terrain in the Indo-Pacific region is complex and challenging. Access can be gained by land, air, or sea, depending on the threat posture. A “mobile reconnaissance” approach, blending mounted and dismounted reconnaissance assets, is probably the best way forward. Finally, the MDRT would optimally reside at an echelon that can adequately fuse and synthesize the collected information for targeting. The collection and insertion capabilities can be trained at the battalion level, but a robust intelligence analysis cell greatly enhances the resulting product. Ideally, this echelon would also possess organic fires capability to complete the kill web—for example, the Army’s multidomain task forces or a Marine air-ground task force.

The Navy and Air Force have articulated a clear vision for their role in the force of 2030, but for the Army’s ground forces, the vast seas that characterize much of the Indo-Pacific region make it a challenge to identify the best ways the service will be relevant and contribute to a fight. During the lead up to the culminating exercise in Hawaii, the MDRT was able to integrate cyber, IMINT, and ELINT capabilities to conduct reconnaissance of the littoral waters from coastal areas. One scenario required a team to identify a signal emanating from an smuggling vessel offshore, which in turn enabled the reconnaissance soldiers to pinpoint the vessel’s location and identify it visually. Using the resulting pictures and coordinates sent back to the FIOC, a host-nation vessel was dispatched to interdict and seize the smuggler. This process was repeated in a later scenario with a 3rd Radio Battalion reconnaissance team, leading to a successful kinetic strike on a target vessel with a joint munition. The MDRT can facilitate sea denial from the shore in conjunction with surface- or air-based fires. As the joint force continues to build out its long-range fires capabilities, an all-weather, persistent sensor to find, fix, and facilitate destruction of sea-based targets will be invaluable. The ability to influence the littorals from coastal positions, as well as work with local partners to deter malign actors below the threshold of conflict, gives the MDRT a relevant role in the region during both competition and conflict.

The multidomain reconnaissance troop is just one attempt to solve the complex problem that military forces in the Indo-Pacific might face in a conflict situation. The Army should experiment with building a conventional force, residing at the tactical level, that is organically capable of collecting across the spectrum of intelligence. The imperatives of survival and mobility demand that this force should be considered a maneuver force first. The MDRT can function as a hub, integrating cross-domain organic and joint assets (that otherwise might not be capable of maneuver on their own) to dis-integrate enemy networks and answer critical information for the tactical commander. Giving our divisions and brigades a tool to leverage joint firepower to gain access, disrupt enemy A2/AD systems, and facilitate limited sea denial is critical to the distributed fight the region demands.

Captain Sean Parrott is a reconnaissance troop commander in the 25th Infantry Division. He is a graduate of the US Marine Corps’s Expeditionary Warfare School.