What the Critics Miss: The Army Combat Fitness Test is Going to Make Us a More Combat-Ready Force 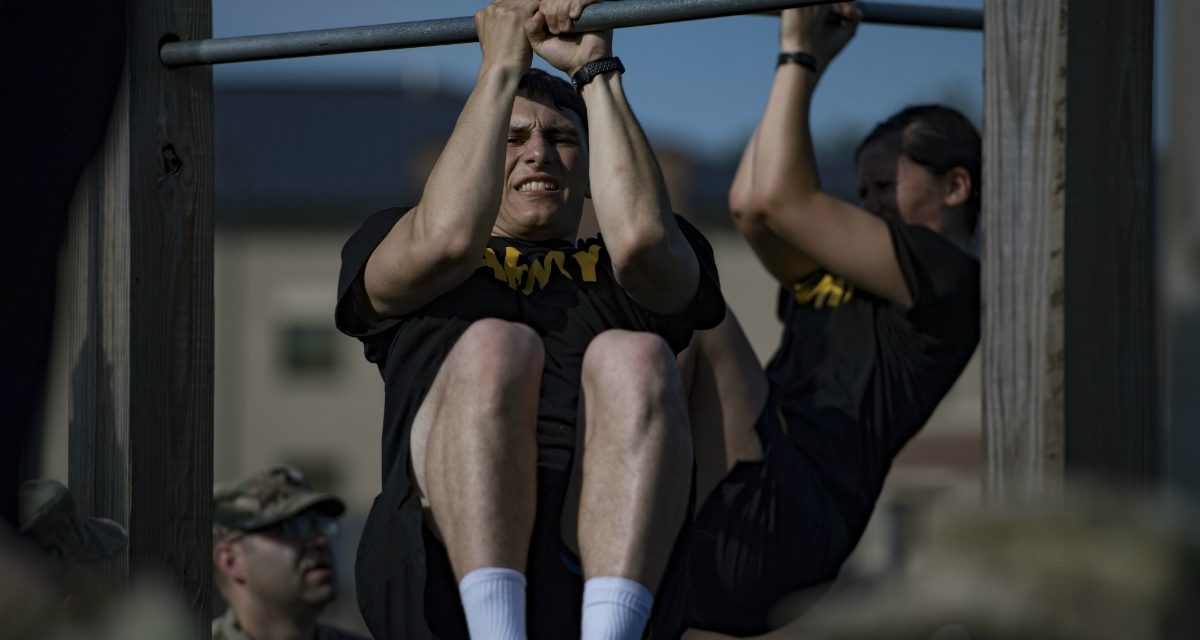 By October 2020, the United States Army plans to begin requiring all soldiers to take the new Army Combat Fitness Test (ACFT)—replacing the push-ups, sit-ups, and two-mile run soldiers have taken as part of the Army Physical Fitness Test (APFT) for nearly forty years. Since 2017, the ACFT has been rigorously tested and studied at select battalions. These battalions executed the new test and participated in extensive research designed to develop and finalize standards, assess effectiveness, and capture injury data. Despite this rigorous testing and research, though, there is still institutional resistance to the new test. Criticisms have been leveled at the technical movements of the test, the new equipment requirements, and most of all, the age- and gender-neutral standards.

What critics miss, however, is that the test is simply better at preparing the Army to achieve its mission and assessing the physical readiness of the force. Age- and gender-neutral standards are the only relevant measurement of physical readiness across the Army’s formations, because combat itself is inherently age- and gender-neutral. More broadly, the ACFT represents a cultural change the Army needs to prepare for the next fight. But it will take engaged leaders to embrace the new standards and instill the holistic lifestyle the Army so desperately needs.

The Evolution of Army Physical Fitness Training and Testing

The United States Army began to incorporate physical training as early as the mid-nineteenth century at the United States Military Academy. By 1906, the Army introduced its first physical fitness program, including twelve-mile ruck marches for infantry and horse-mounted movements for cavalry. In 1920, a manual, Mass Physical Training for Use in the Army and Reserve Officers’ Training Corps, was published, which introduced an individual efficiency test. The test was composed of a hundred-yard run, running broad jump, wall climb, hand grenade throw, and obstacle course run. Since the first publication of Field Manual 21-20, Physical Training, in 1941, the manual has undergone various revisions to update the physical focus and standards, including the introduction of minimum standards in 1969.

In 1975, President Gerald Ford signed legislation opening service academies to women, which started one of the most significant shifts in physical training and doctrine for the force. The 1980 revision of FM 21-20 represented the Army’s transition “from a Vietnam-era combat readiness focus” to one that emphasized general fitness and body composition. The paradigm shift from a combat focus to overall fitness included standardizing the three-event Army Physical Readiness Test (later renamed the Army Physical Fitness Test)—push-ups, sit-ups, and a two-mile run. The test was gender-integrated, required no specialized equipment, was easy to administer, provided standards adjusted for gender and age, and was meant to measure physical fitness rather than combat readiness. As a result, by the late 1980s, commanders were raising concerns over the APFT and the lack of combat readiness across the force.

In 2003, the US Army Physical Fitness School proposed a new six-event test. Over the subsequent years, the shape of a replacement for the APFT evolved, but research on and implementation of a new test stalled and ultimately failed in 2012. However, the physical demands of Operation Iraqi Freedom and Operation Enduring Freedom highlighted the large number of “marginally fit” soldiers recruited into the Army. Research found that these soldiers were more likely to experience injuries, which drove further assessment of the Army’s physical readiness and resulted in an additional revision to training guidance. In 2010, Training Circular 3-22.20, Army Physical Readiness Training was published with a focus on combat readiness, stating in its introduction that “combat readiness is the Army’s primary focus as it transitions to a more agile, versatile, lethal, and survivable force.” Despite this, the Army made no changes to the APFT as the test for physical readiness—until now, as the service transitions to the ACFT.

The history of physical training in the Army makes clear two things that are important to bear in mind as the service moves toward the new test: (1) that Army physical training and tests are continuously restructured to meet the both current and future needs; and (2) that each restructuring—including this one—is focused toward combat readiness.

“Physical readiness is the ability to meet the physical demands of any combat or duty position, accomplish the mission, and continue to fight and win.”

Physical testing in the Army has historically been a way for commanders to measure and prepare the physical readiness of their formations for combat. However, the introduction of the adjustable age and gender scoring system and lack of combat-focused events hindered the APFT from being an effective measuring tool for combat readiness. Instead, the APFT provides data on general fitness, scaled by age and gender, not the combat readiness of the whole organization to deploy and fight in an age- and gender-neutral environment. This is a test that was designed in the 1970s and rolled out to the force in the 1980s—a time when jazzercise and step-aerobics were popular workouts and women had just recently been allowed to run the Boston Marathon. Fitness research has come a long way since then. Additionally, by incentivizing performance on the APFT through the use of scores for evaluations and order-of-merit lists, the APFT created a culture where the focus of fitness training is merely to perform well on the APFT. The emphasis on the APFT score has come at the expense of combat-focused physical training for many units.

The APFT does not measure combat readiness, and the very low female standard does little to assess the fitness of the Army’s very capable women. To pass the APFT, soldiers must achieve a score of sixty points in each of the three events. A passing score for a male in the 17­–21 age group requires forty-two pushups in two minutes, fifty-three sit-ups in two minutes, and a two-mile run time of 15:54. The female minimum standard in the same age group requires nineteen pushups, fifty-three sit-ups, and an 18:54 two-mile run. This drastic difference in gender standards of the APFT means that a male meeting the female standard would significantly fail with a cumulative score of 107 on the APFT, and a woman meeting the men’s minimum standard would result in a total score of a 256. The sweeping difference in basic standards has lowered the bar for females and has set the precedent that women are not expected to perform to even basic minimum standards expected of men.

The introduction of women into combat arms further emphasizes the need for a single-standard test. Thirty-five women have met the gender-neutral standards to achieve the coveted Ranger tab, and six have passed the Ranger Physical Assessment Test to serve in the 75th Ranger Regiment. The APFT is the single place were soldiers are held to a lower standard based on age and gender. When soldiers complete testing for the expert field medical badge they are expected to complete all events, to a single standard—except the APFT. During courses at the Army’s John F. Kennedy Special Warfare Center and School, soldiers are required to meet gender- and age-neutral standards on the five-mile run and twelve-mile ruck march, yet continue to use the APFT despite the scaled age and gender standards. The force has repeatedly met single standards when required. The outdated APFT standards have created a culture where women and older soldiers are required to do considerably less even when they have the ability to meet other age- and gender-neutral standards.

The ACFT transitions the Army back to a combat-focused test through standardized minimum requirements on a single scale. This single standard is the most effective way to measure combat readiness and prepare formations for future ground combat. Additionally, the ACFT tests five domains of physical fitness: muscular strength, muscular endurance, cardiorespiratory endurance, explosive power, and speed/agility. This test requires a well-rounded approach to physical fitness training, including functional fitness, weight training, and building cardiovascular endurance. This is already being done at many units across the Army, but the ACFT emphasizes its necessity across the Army. Ensuring the entire formation meets the same standard, regardless of age and gender, is essential to preparing the force to shoulder the physical requirements necessary to fight and win on the modern battlefield.

Eleven select battalions are testing the ACFT and validating the scoring standards. When unofficial data from the test battalions was published on Facebook, it created an uproar online. Most complaints claim that the Army has done a poor job rolling out the new ACFT because units do not have the equipment to train. However, the unofficial data shows the leg tuck as the most failed event. This undermines the complaint that soldiers cannot train for the test due to equipment shortages. The leg tuck only requires a pullup bar, which can be found at any gym or playground, or can be easily installed on most doorframes.

Other criticisms declare that the ACFT is discriminatory against women. The unofficial data published online showed that 30 percent of men failed, while 84 percent of women did. But the leg tuck—to which most of the failures were attributed—is an abdominal exercise, and the APFT’s abdominal exercise, the sit-up, is the only event on the current test with gender-neutral scoring. More broadly, the test does not require men and women to compete head to head, but simply requires everyone to meet basic minimum standards—standards that ensure everyone can survive on a gender-neutral battlefield and physically carry their share.

Finally, the Army released ACFT information two years prior to implementation of the test and has provided the force with updates and tips on how to train without equipment through the ACFT website. Two years is more than enough time for the force to prepare for the ACFT events.

Leaders must inculcate a holistic, functional-fitness approach to training. The ACFT requires physical-fitness culture to change in the Army. Before, soldiers could show up for a semi-annual APFT with very little training or nutrition and often meet the minimum standards. The ACFT will require more preparation, but many of the combat-focused movements should not be new to the force. The expectation is that combat-focused physical training is included in other aspects of military training, including warrior tasks and battle drills and common soldier tasks. While this has been implemented to varying degrees across the Army, the ACFT will require leaders to reprioritize this training once again.

Implementing the new ACFT and changing the culture around physical-fitness testing will rely heavily on leaders embracing the test and preparing their formations to excel. The new ACFT will require a paradigm shift across the Army from general fitness back to combat-focused fitness. Men and women alike must be able to shoulder their share of the fight physically. Most importantly, the test cannot be seen as unfair or biased. The Army has funded years of research to develop this test to assess the minimum physical requirements expected of soldiers in combat. The test does not ask soldiers to perform at the level of professional athletes, or even put men and women against each other. Instead, it has minimum standards that must be achieved to make the force overall more combat-ready and effective. To complete the paradigm shift from measuring general fitness to meeting a combat-minimum standard, leaders must embrace the ACFT and understand the bigger picture: the test is meant to make the force ready for the next fight.

Kelly Buckner is an Active Duty Civil Affairs Major. She is currently a student at the School of Advanced Military Studies and holds a B.A. from Michigan State University and a M.S. from the University of Missouri Science and Technology.