Dangerous Myths, Ukraine, and the Future of Great Power Competition 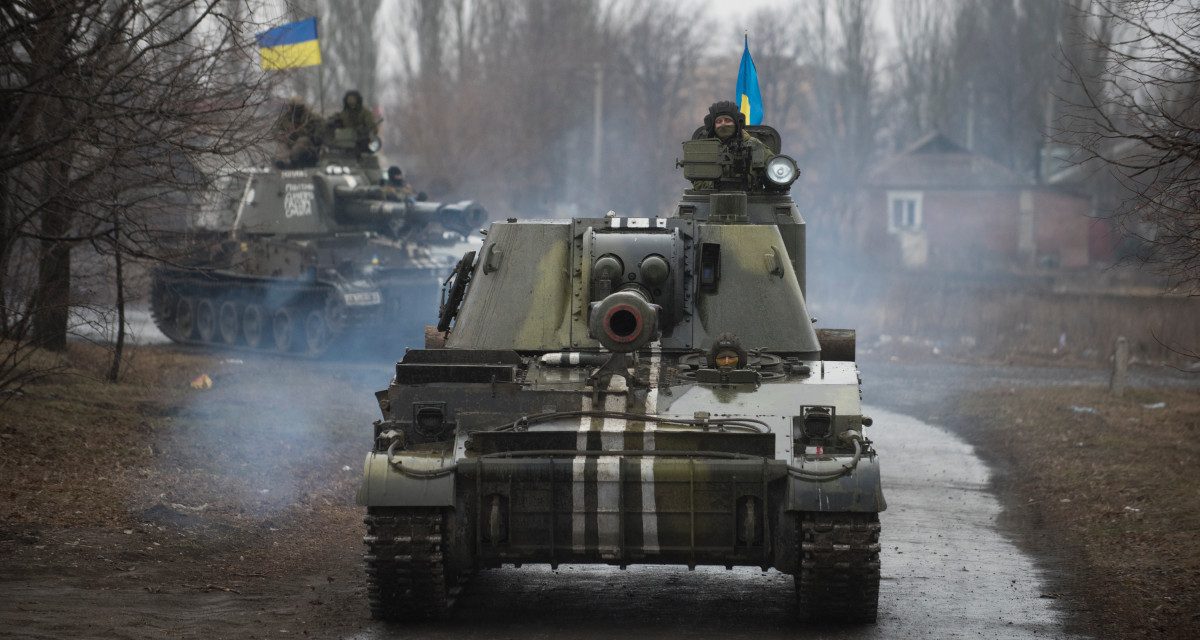 Editor’s note: This article introduces a full report based on a contemporary battlefield assessment conducted by the Modern War Institute. The authors of the report have led several such contemporary battlefield assessments—including to Sri Lanka (2016), the Republic of Georgia (2017), Colombia (2018), the Baltics and Ukraine (2018), and India (2019). They describe them as “research staff rides”—a combination of field research and traditional military staff ride—and have also produced a helpful guide for others who wish to plan and conduct similar research trips, A Leader’s Guide to Conducting Research Staff Rides.

Great power competition has reentered the lexicon of policymakers and military strategists with a vengeance in recent years. The 2018 National Defense Strategy affirms that “inter-state strategic competition, not terrorism, is now the primary concern in U.S. national security.”

Yet great power competition—and at the extreme end of the competition continuum, great power conflict—is not likely to resemble its nineteenth- or twentieth-century antecedents. “Today’s versions of rivalry and competition,” writes Michael Mazarr, “almost always play out in the economic, political, cultural, and informational spheres—not on the battlefield.” Although the nuclear revolution makes “victorious wars of conquest” unlikely, it does not mean that great power competition cannot turn lethal, just as it did during the Cold War in places such as Vietnam and Afghanistan.

The triggers for a great power war could be China’s or Russia’s embrace of some historical claim to a disputed territory or population it once controlled. The principal cause of such a conflict—fought with modern means over age-old disputes—is what Andrew Wilson calls “Russia’s addiction to dangerous myths.” These myths are not invented but rather have deep and divisive historical roots, a perversion of the “imagined communities” political scientists invoke to describe ethnonationalist conflict.

Yet these myths animate a new type of great power conflict, one that may forego conventional military operations for other less familiar battlefields. While this embrace of so-called hybrid warfare is arguably nothing new in the annals of warfare, it may become systematized and normalized as not just an ancillary enabler to conventional means but rather as something that supplants traditional forms of warfare, whereby conventional or other types of power are ancillary to hybrid means. In this type of warfare, Russia and China hold both tactical and strategic advantages over the United States, which they lack when it comes to conventional conflict.

It is something of a truism to say that modern warfare is becoming infinitely more complex. Similar predictions are made virtually every generation. Yet in the current operational environment, with what retired Gen. Raymond Odierno famously called the “velocity of instability,” the battlefields of today and tomorrow appear to be shifting toward more urban and densely populated landscapes against an enemy that is seemingly unbound by international norms and that attempts to hide or disguise its actions via the use of third-party proxies.

This type of warfare is playing out between Russian-backed separatists and a Western-backed Ukrainian government in the Donbas, a Switzerland-sized border region in eastern Ukraine. The conflict has already claimed over ten thousand lives and displaced three million people. The war was an outgrowth of the illegal annexation of Crimea by Moscow in 2014—or what one witness described to us as Russia’s “soft occupation of Ukraine.” To boost its defenses and deterrence capabilities, Kyiv has relied on Western military and economic support as well as on legions of nationalist volunteers.

The war in Ukraine’s East has rattled nerves in the Baltic states as well. This vulnerability was made more acute after the November 2018 attack on Ukrainian vessels and seizure of two dozen Ukrainian sailors in the Sea of Azov, which also resulted in several casualties. The purpose of the provocation was to force Kyiv to cede control of the Sea of Azov to Moscow, particularly its northern shores, thus giving Russia an unfettered naval bridge between the Donbas and Crimea. With each provocation and escalation, the appetite of Russian president Vladimir Putin is not satiated but rather expands, as he feasts on increasingly larger prey.

Russia’s grand strategy, according to Eugene Rumer, is to create “a multipolar world, with Russia as one of its poles.” Angela Stent argues that Russia seeks “a seat at the table on all major international decisions,” and also believes that it deserves a zone of “privileged interests, namely that its post-Soviet colonies are neither hostile to Moscow nor puppets of the West.” The motivation for this strategy is the decline of Russian influence during the decade immediately after the end of the Cold War; the ignoring of Russia on matters related to security among former Warsaw Pact members, including the eastward expansion of NATO; and the fear of an internal revolt or a further unraveling of Moscow’s control over its disparate territories and people.

The question military strategists are grappling with is Russia’s intended means. To date, the Kremlin has relied on a peculiar mix of strategies, old and new, to achieve its objectives of restoring Moscow’s great power status. On the one hand, it has relied on a nineteenth-century norm of land grabs and annexing physical territory using military force, both conventional and unconventional—something largely abolished after World War II.

On the other hand, it has pioneered the use of new forms of hybrid warfare by committing acts of aggression that fall below the traditional threshold of war—relying on deception, subversion, misinformation, cyber, and electronic warfare as part of a calculated strategy to keep the enemy unstable and provide Moscow with plausible deniability. What Putin has studiously avoided is a direct conventional war with NATO. His embrace of this kind of warfare, as Robert Person notes, is “subtractive,” in that it seeks to offset the United States’ (or Europe’s) military superiority.

In this regard, Russia’s weaponization of information goes way beyond Cold War–era “active measures,” which mostly consisted of run-of-the-mill propaganda and espionage. Its actions in Ukraine provide a case of information operations not as a complement to but rather as a key component of modern warfare. After Crimea’s annexation, Russia actively supported an antigovernment separatist insurgency in Ukraine’s Donbas region, even providing surface-to-air missiles to rebels who downed a civilian jet in July 2014, killing everyone aboard.

An essential part of its hybrid warfare also included the use of information operations in Ukraine to distort the narrative and turn public opinion against the authorities in Kyiv as well as electronic warfare to jam the Ukrainian military’s command, control, and communications capabilities. As Rod Thornton writes, “The use of jamming technologies in modern warfare can be an operational as well as strategic game-changer.”

It is not just Russia that is expanding its use of subversion, information operations, and other forms of hybrid warfare. Consider Beijing’s use of “little blue men” within its maritime militias, who are disguised as Chinese fishermen but attack ships transiting through the South China Sea. There is also evidence that other countries are imitating how Russian trolls and hackers use social media, specifically Facebook, to interfere in other countries’ politics. Pro-Beijing operatives are said to post thousands of bits of disinformation on Facebook every day. A Taiwanese official described to the Washington Post “the subtle Chinese threat, spread through social media, newspapers and television in an influence campaign that touches every business, farm and worker.”

This kind of information warfare has gone global, according to the Atlantic Council’s Digital Forensics Research Lab, citing an Iranian-led disinformation campaign that used Facebook and Twitter to reach millions of people. Similar disinformation campaigns were tied to the governments of Venezuela and Brazil. As NATO assistant secretary general for emerging security challenges Antonio Missiroli told reporters, “Hybrid warfare is thenew normal.”

Our recent report, published by the Modern War Institute, provides a glimpse into some of the tactics that will characterize great power conflict—specifically hybrid, proxy, information, maritime/littoral, and urban warfare—at the level below a major war. It is important to understand these tactics on two accounts. First, US adversaries continue to both invest in and employ these capabilities. In order to combat them, the United States must first understand them. Second, the potential exists that a miscalculation involving one or more of the above-mentioned methods could inadvertently spark a major war, so defense professionals must consider this possibility.

Among others, the report includes the following major findings:

Lionel Beehner is an international affairs fellow at the Council on Foreign Relations and formerly an assistant professor at the US Military Academy at West Point and research director of West Point’s Modern War Institute. He holds a PhD in political science from Yale University.

Liam Collins is the executive director of the Madison Policy Forum and the Viola Foundation. He is a retired Special Forces colonel and founding director of the Modern War Institute. From 2016 to 2018 he served as the executive officer to retired Gen. John Abizaid during appointment by the secretary of defense as senior defense advisor to Ukraine. He has a PhD from Princeton University and is a life member with the Council on Foreign Relations.