Digital Dunkirk: What the Afghan Evacuation Should Teach Us about the Future of Volunteer Support to the US Military 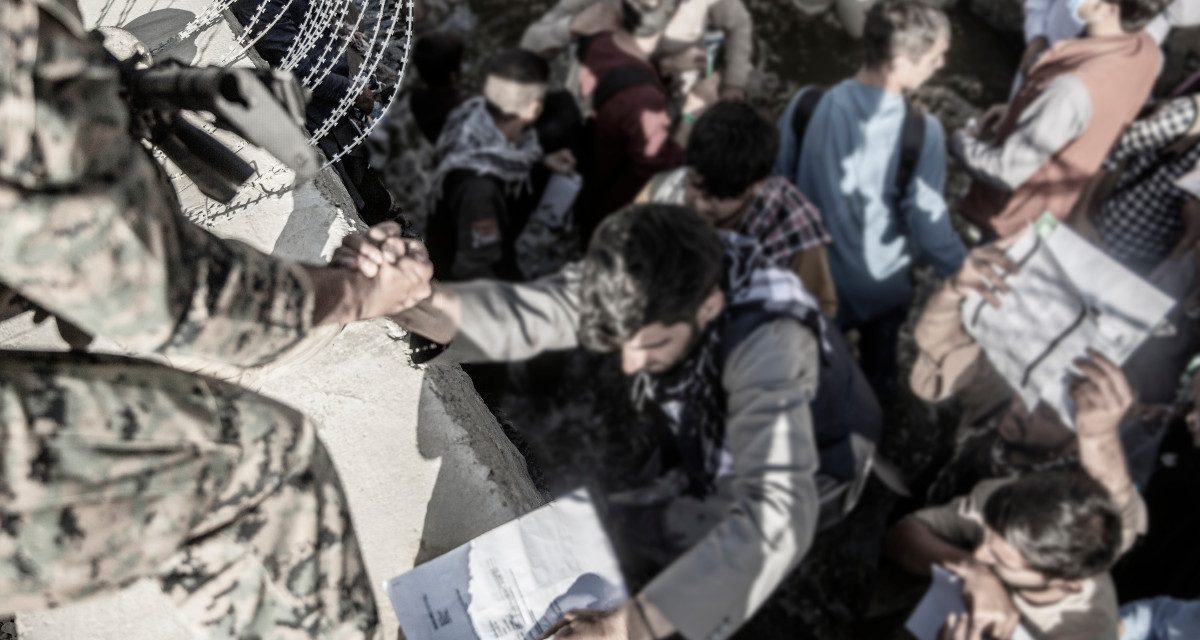 It was a former Afghan interpreter reaching out for help that pulled Sgt. 1st Class Joseph Torres to connect with other likeminded individuals to assist his former colleague out of Afghanistan in late August. My experience was similar to Torres’s, I found my way to a West Point alumni Signal chat group that was working to facilitate Afghan evacuations when I was trying feverishly to help a former colleague who was in Qatar receiving Afghan refugees in the absence of critical logistics. It was the human dynamic combined with a looming deadline that spurred action. Requests in online and messaging chats ranged from asking which gates were open at the Kabul airfield to requesting helo support. The speed and the collective, iterative knowledge were integral to the work of the virtual groups, especially when the catalysts were personal Afghan colleagues facing life-and-death consequences and needing help to evade and escape the Taliban.

The organic, voluntary, collaborative effort highlights an important lesson with implications well beyond Afghanistan. The Department of Defense can leverage similar enthusiasm, passion, and human capital by exploring the possibility of creating an auxiliary to help augment future missions.

The evacuation efforts in August—which have been dubbed a “digital Dunkirk,” a name inspired by the historic World War II effort in which civilian vessels assisted the Royal Navy in evacuating troops—allowed groups of individuals to influence operations in Afghanistan. In 2021, organizations such as the Pineapple Express, Team America, Allied Airlift 21, No One Left Behind, and other unnamed groups ignited around-the-clock grassroots efforts to expedite the safe passage of Afghan allies during the precarious week before the deadline to cease military operations in Afghanistan. Some of the organizations are official nonprofits, while others were just groups of passionate individuals. These groups were composed of a motley crew of national security professionals, military members, veterans, aid workers, business professionals, congressional staff, and others who felt emboldened to establish some order to the chaos. Not formally recognized by the Department of Defense until after the mission in Afghanistan ended, the groups were independent of the military. However, they worked in concert, albeit in the shadows, with the military and the interagency on the ground. They influenced operations from thousands of miles away, circumventing bureaucracy and accelerating communications. Several of the groups cite thousands of refugees’ safe passage to their credit. It is difficult to discern how much responsibility each group can claim because it was a collection of actions, but nonetheless their work created an unprecedented boost to the military efforts on the ground.

The groups accomplished sophisticated operations in a short amount of time, including setting up virtual tactical operations centers, intelligence gathering, fundraising, communicating with a variety of stakeholders in real time, coordinating logistics, and even moving directly into the theater to escort Afghans. The sum of their efforts created a modern-day Underground Railroad moving evacuees from location to location, circumventing the Taliban en route to the Kabul airport, and then personally using their military networks to expedite processing. Members of these groups relied heavily on encrypted messaging apps, Facetime, and simple instructional cues (like displaying a pineapple) to send piecemeal information to Afghans on navigating the chaos and crowds at the Kabul airport. In some cases, the groups funded private charter flights to extract Afghans out of the country. The speed with which the groups worked and the flexibility to incorporate diverse experiences, combined with the ability to fundraise, augmented the military unprecedentedly. Impressively, one Instagram influencer, Tommy Marcus, raised over $6.7 million with a GoFundMe campaign—with $800,000 generated in the first two hours—to fund private flights out of Afghanistan.

Part of these efforts’ impact was because of the transparency they offered to Americans using social media hashtags like #DigitalDunkirk, #SaveOurAllies, and #AfghanEvac to reach broad audiences to accelerate fundraising and awareness. The groups circumvented bureaucratic obstacles leveraging insider knowledge and relationships. As only 7 percent of the US population has served in the military, these groups proved that civilians are willing to contribute their expertise in the absence of compensation for causes they care about passionately.

The desire to contribute also aligns with the recent trends in the veteran community to do mission-based work. Several nonprofits popular in the veteran community emerged in the last two decades, such as The Mission Continues and Team Rubicon. The nonprofits offer camaraderie and a clear purpose and mission set while capitalizing on the training, skills, and expertise developed in the military. Involved members contribute to the greater national and global community allowing military personnel who are no longer formally serving to continue to give back in a meaningful way. A commitment to something greater than self, from both veteran members of these groups and their nonveteran members, also parallels recent trends that millennials and younger generations value meaning and purpose with their work. An auxiliary to the Department of Defense might be a gateway to capitalize on the talent of individuals that want to support the military but do not want to join formally.

Moreover, it would allow servicemembers transitioning out of the military to remain connected and provide an even greater return on the training invested in them, especially if they do not join the reserve component at the end of their active duty commitments. Retired General Stanley McChrystal has called for more civic connectedness through, for example, the Serve America Together campaign that he co-chairs. The campaign recognizes that not everyone has to wear a uniform to serve. An auxiliary could capitalize on interest in getting involved with minimal commitment and allow DoD to tap into hard-to-find talent. It would also allow individuals outside the defense sector to gain experience with and a connection to the military via their contributions.

The concept of an auxiliary is not new. The United States Coast Guard has benefited from its auxiliary and the United States Air Force from the Civil Air Patrol for around eight decades. The Marine Corps also has a cyber auxiliary. Almost half of US states have state defense forces formed of passionate civilian volunteers who serve mostly without compensation and offer expert knowledge and resources for the betterment of their states and the country. In these examples, the organizations served as force multipliers while freeing up the National Guard, reserve, and active duty units engaged in military operations.

In recent years, the Air and Army National Guard have contributed significantly to US military missions, and there are efforts underway to grow skillsets like cyber in the National Guard to augment and accelerate access to information for active components. Specifically, the “Cyber 9-Line” allows members of the National Guard to communicate cyber incidents in their states to US Cyber Command quickly, which then provides information to the National Guard unit to help address the incidents. The reserve component offers the unique advantage of having servicemembers with inroads to industries and communities removed from the military. Connections between private and public sectors can grow even deeper if the Department of Defense has an auxiliary of members who are associated with various public and private organizations.

As the reserve component absorbs mission responsibilities, reducing stress on active duty forces, an auxiliary could in turn reduce pressure on the reserve component. An auxiliary can also open the aperture to highly skilled talent the military struggles to recruit, develop, and retain. As military compensation accounts for one-third of the DoD budget, creating force composition for volunteers could also reduce or mitigate the rising personnel costs. Ideally, the long-term value of services and hours donated would exceed the cost to establish and maintain the auxiliary.

How could it work?

Auxiliary members could contribute to “task rabbit” tasks, as proposed by the Defense Innovation Unit’s Gig Eagle app initiative. Or a “problem” could be crowdsourced, taking advantage of the type of push-pull dynamic that was evident on the ground in Afghanistan. Conceptually, individuals could accept specific tasks or, through the power of the masses, solve problems collectively in a community.

Crowdsourcing benefits would be reduced costs, faster problem solving, the flexibility to incorporate diverse experiences and learnings, and the scalability to solve significant problems simultaneously regardless of geography. Crowdsourcing is not a new concept to the military. Most recently, the military even sought the public’s help on renaming military bases. In the context of the Fourth Industrial Revolution, it is of the utmost importance the military enhances the culture around digital literacy, embraces accessible technology, and welcomes thought leadership from contributors in private sectors.

The benefit of an auxiliary is that individuals would be pre-vetted to solve problems, and there could be structure to avoid duplication of efforts. In the absence of DoD-directed opportunities, passionate citizens established ad hoc auxiliaries during the Afghanistan crisis, and this poses some risks—for instance, Signal, WhatsApp, and text chats being compromised or non-vetted individuals creating influence in the groups. Major news sources reported operators associated with the Pineapple Express group lost communications at one point because of the US military jamming communications. Unsanctioned military activity could also counter or distract from the US mission or create a greater need for military intervention if independent American actors were compromised.

More importantly, the recent clout of these groups evidenced that capability normally associated with the military can be wielded by groups not formally recognized or approved by the US military or the US government. That becomes dangerous if those groups perceive the mission in a way that diverges from that of US forces on the ground. Fortunately, the groups formed were altruistic and their ways and means led to the same end state the Department of Defense worked toward. Formal creation of an auxiliary means it is not just good fortune that ensures missions and activities are synchronized. A sanctioned DoD structure with an auxiliary could give credibility, empowerment, and active coordination to those individuals and groups whose efforts are aligned with the US government.

In the end, invisible forces in the form of ad hoc auxiliaries were crucial in contributing to the saving of countless lives as the US presence in Afghanistan came to a close. The Department of Defense can actively work to incorporate lessons learned and the capacity from these organizations without diluting the creativity, culture, and grit formed by creating a structure to absorb and empower those willing to help.

Laura Keenan is a lieutenant colonel in the District of Columbia Army National Guard and is currently assigned as the J55, Division Chief for Policy and Strategy in Cyber National Mission Force.

The views expressed are those of the author and do not reflect the official position of the United States Military Academy, Department of the Army, or Department of Defense, or of any organization the author is affiliated with, including the Army National Guard and US Cyber Command.