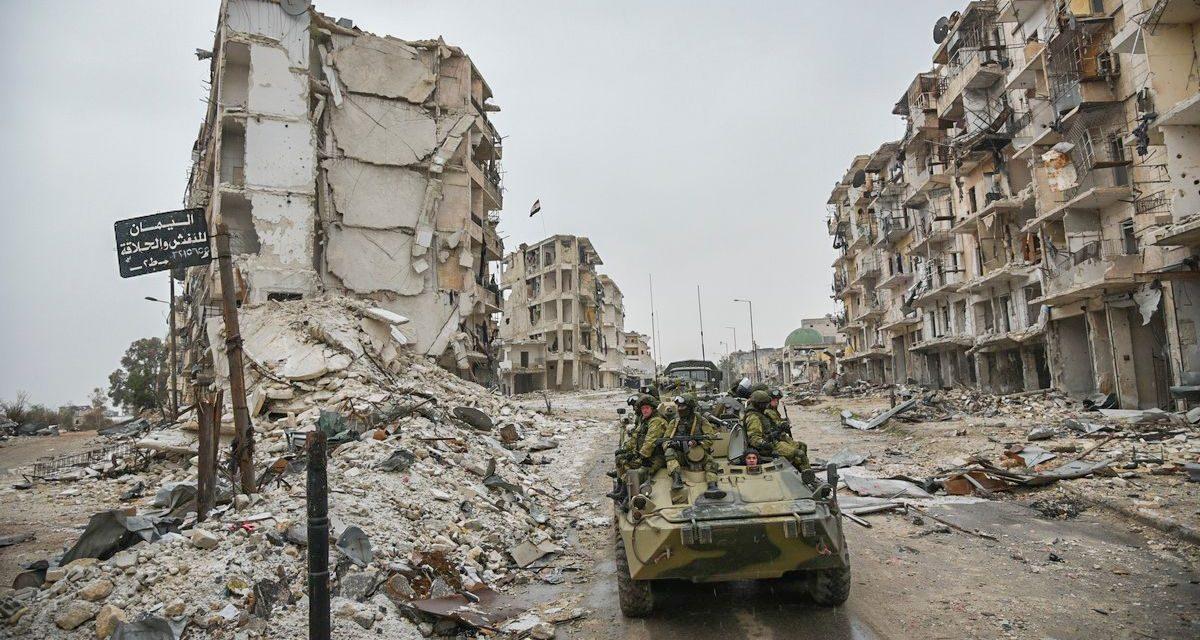 The Russian invasion of Ukraine grinds on. So far, Ukrainian conventional forces and resistance groups have mounted a stiff defense against Russia’s numerically superior forces. The Ukrainian people, meanwhile, have rallied behind their government and seem willing to join the fight. Over the past few weeks, civilians have blocked armor with their bodies and prepared Molotov cocktails; Ukrainian women and children have started weaving camouflage netting; and civilian casualties from Russian fire are mounting. All of this is deliberately disseminated through a savvy Ukrainian social media campaign that has successfully reverberated in Western countries.

The conflict can best be characterized as what Rupert Smith has called a war among the people, in which “civilians are the targets, objectives to be won, as much as an opposing force.” It is no wonder, therefore, that many analysts and observers have urged Ukraine to adopt a strategy based on irregular warfare. Since the overwhelming Russian forces may well end up occupying at least part of the country, a Ukrainian insurgency will be part of the armed resistance. Any such insurgency will be long and bloody. But so far, most commentary on the topic has overlooked the grim but successful track record of Russian counterinsurgencies. Policymakers need to grapple with the brutal reality of Russia’s approach if they are to predict how Russian forces might react when confronted with a Ukrainian insurgency armed with advanced weaponry.

The Logic of Russian Counterinsurgency

There are two primary ways of countering insurgencies: states can either try to win hearts and minds or crush them. Both distill down to the challenge of fighting an elusive enemy hiding among the people. Modern Western military thought considers such a fight an indirect, population-centric approach hinging on the state’s ability to enhance the populace’s collaboration with the government. This assumes that strengthening the ties between people and state authorities augments the latter’s legitimacy while simultaneously weakening the insurgent’s position.

But while this approach emphasizes collaboration, there are other potential pathways toward control. Stathis Kalyvas, for example, has pointed out how the use of force can lead to more or less unquestioned dominance. Here, occupying forces can establish control through effective sanctions aimed at insurgents and their supporters. They use force to neutralize opponents and coerce people to comply with the government. Typically, the identification problem caused by the elusive nature of the opponent makes it particularly hard to target these sanctions and therefore indiscriminate violence and collective punishment are common. Thus, instead of enhancing governmental legitimacy this brutal, so-called authoritarian approach essentially revolves around gaining control through repression.

Recent Russian military campaigns in Chechnya and Syria, which featured indiscriminate violence and collective punishment, make clear that modern Russian armed forces adhere to an authoritarian counterinsurgency strategy. Moreover, an analysis of the historical track record reveals that this brutal approach has not only become a trademark of Russian counterinsurgency but has also brought unprecedented success. Of the twenty-four rebellions and insurgencies encountered between 1917 and 2017 Russia (or the Soviet Union) “won” twenty-one of these conflicts—an astonishing 87.5 percent—where “won” means that “the insurgency is militarily defeated and its organization destroyed, or the war ends without any political concessions granted to insurgent forces.” This makes Russia one of the world’s most effective modern counterinsurgents.

Ukraine may represent an outlier for Russia: unlike the Chechens, Dagestanis, and Ingush, the Ukrainians have a substantial number of conventional military units, including an effective drone air force, that are working alongside pro-Ukrainian militias, territorial defense units, and resistance groups. The Russian approach may struggle against a more professionalized insurgent force with modern weaponry. But analysts would be unwise to write Russia off too quickly.

There are five characteristics of an authoritarian approach to counterinsurgency. First, authoritarian regimes have a stronger grip on information than democracies. While these regimes are not immune to dissent, their control of information offers a powerful tool for protecting their hold on power and silencing critics.

Second, and related, an authoritarian state’s monopoly on information can be used for mobilizing mass support at home for even the most brutal of campaigns. Key here is that in the logic of the authoritarian approach, information operations focus on selling the threat of the insurgency to domestic audiences and not on winning over the hearts and minds of the local population. The aim is to demonstrate the necessity of the use of force against insurgents and their supporters.

Third is the deliberate use of massive and often indiscriminate violence. This seeks to prevent the insurgents from mobilizing popular support while simultaneously augmenting governmental control. The fragmentation of society that results from such violence denies opponents the ability to build or sustain solid ties with local communities. For this purpose, “coercive engineered migrations” might also be adopted. As a result, the insurgency will become more isolated as it is deprived of popular support and sanctuary.

Fourth is the concept of “Holding, Suppressing, Controlling.” This effectively boils down to the imposition of a police state. Physical control of territory and people gives the state the ability to monitor cooperation and trumps achieving any sense of legitimacy among the local population. When satisfied with the level of control, locally recruited paramilitary, police, and intelligence forces will gradually take over from the armed forces. This is all about imposing and sustaining an effective apparatus for punishing any dissent as swiftly and severely as possible in order to achieve a deterrent effect.

Finally, even authoritarian governments have to persuade the population to accept the new balance of power. They typically do so by interposing the state in every local societal transaction and activity and thus rendering it indispensable to public life.

The Brutal Reality of Russian Counterinsurgency

The most eye-catching feature of Russian counterinsurgency is its brutality, or more precisely its heavy reliance on massive force and suppression in the form of indiscriminate violence and collective punishment. The specific use of both methods and their interaction depends on capabilities and local regime characteristics. Historically, Russia has employed indiscriminate violence when its capabilities have been limited. In such cases the counterinsurgent was weakly rooted in the target society and local asymmetries favored the insurgency. Collective punishment, by contrast, has been most commonly observed under Russian regimes with strong capabilities and a sufficient degree of state penetration in the local population. In both cases, unquestioned dominance is achieved by unleashing brutal force on people living within the territory in which an insurgency takes place. Such efforts tend to be supported by subjecting Russian society as a whole to measures for curtailing dissent and mobilizing popular support. In fact, the Russian government’s thinking about cutting itself off from the global internet reflects a similar desire to control the information space for its domestic audience.

The use of indiscriminate firepower is generally a response to the difficulties in coordinating combined arms operations in tough terrain in which the population is mostly on the side of the insurgents. This has resulted in the primacy of artillery in Russian ground combat power in counterinsurgencies. Substituting firepower for infantry makes it possible to save soldiers’ lives by avoiding close combat. This reliance is heightened in areas where local support for Russia is elusive. During the Soviet-Afghan War, for example, massive fire support was the weapon of choice to limit risk to Russian soldiers and to compensate for the relatively low numbers of available infantry. Herat, a city that had been in guerrilla hands even before the Soviet invasion, was shelled to such an extent that three quarters of the center was obliterated. More recently, Russian airpower has been deployed to accompany conventional and thermobaric artillery in bombing the likes of Grozny and Aleppo into submission. Indiscriminate firepower is an enduring trait of the Russian approach to counterinsurgency; it will most likely be deployed in any future scenario in which insurgents hold an advantage.

When regime capabilities are strong, Russia tends to adopt collective punishment as its main vehicle for establishing control. Throughout modern Russian history, the Russian state has regularly turned to forced resettlement as one of its most extreme forms of repression in counterinsurgencies. The objective of such drastic measures is to target an insurgency’s tangible support in order to deny provision of goods and food, gathering of intelligence, and mobilization of new recruits. The application of collective punishment is also intended to set an example and deter the remaining local population from supporting insurgents. Of course, the operational challenges of this approach are manifold, and it’s unclear whether Russia would resort to such measures in Ukraine. But collective punishment remains a potential feature of the Russian counterinsurgency toolkit.

Once Russian armed forces have restored security, the results of the counterinsurgency campaign are consolidated and sustained through “reconstruction by local government.” This particular form of state building focuses on rebuilding governmental institutions by using local allies to reestablish political power according to the customs of the target society. This entails co-opting powerful leaders from within that society. Clientelism tends to result: the new local leaders remain heavily dependent on Moscow. Syria’s Bashar al-Assad and Chechnya’s Ramzan Kadyrov both epitomize the success of this approach.

This track record suggests that if a Ukrainian insurgency materializes, any counterinsurgency effort will be aimed at establishing unquestioned dominance through the use of massive force. Russia has already sought to shape its domestic public opinion by prohibiting dissent and using state-controlled media to mobilize popular support for the war. And there are already many reports of indiscriminate firepower. This all bodes ill for Ukrainians: even without an insurgency, most characteristics that allow for the implementation of brutal authoritarian counterinsurgency are already in place. The threat of “Groznyfication” is real.

Little more is needed for the Russian armed forces to fully unleash a campaign of massive, indiscriminate violence in order to break the resolve of the Ukrainian population. Similarly, collective punishment—despite its absence in other recent campaigns—cannot be excluded as some of the preconditions are in place. Especially in areas where Russia succeeds in establishing military dominance, repression and even forced migration through refugee corridors could be an option.

So much for Russian attempts to win local hearts. As for converting local minds, thus far, Russian troops seem to enjoy little support across Ukrainian society. But it is not hard to imagine that under the pressure of brutal violence some local agents might start to collaborate in order to establish a new political order in occupied territories. The Russians have almost certainly already identified potential candidates for co-optation.

The outlook is especially grim if the Ukrainian war develops into a full-blown insurgency. Such an insurgency will prove costly to the Russian armed forces, but the costs for Ukrainians may well be much higher. For now, the challenge for the irregular warfare community is to identify the best ways to offer resistance tactics, techniques, and procedures in the face of a likely Russian counterinsurgency—all while trying to limit the costs to Ukrainian civilians.

Dr. Martijn Kitzen is a senior nonresident fellow with the Irregular Warfare Initiative and a professor at the Netherlands Defence Academy where he holds the chair of irregular warfare & special operations.

Major Marnix Provoost, MA is an infantry officer in the Royal Netherlands Army and a PhD student at the Netherlands Defence Academy, examining the analogies between state formation and insurgencies.

The views expressed are those of the authors and do not reflect the official position of the United States Military Academy, Department of the Army, or Department of Defense, or that of any organization the authors are affiliated with, including the Dutch Ministry of Defence.