Dr. Graham Allison on the Likelihood of War with China 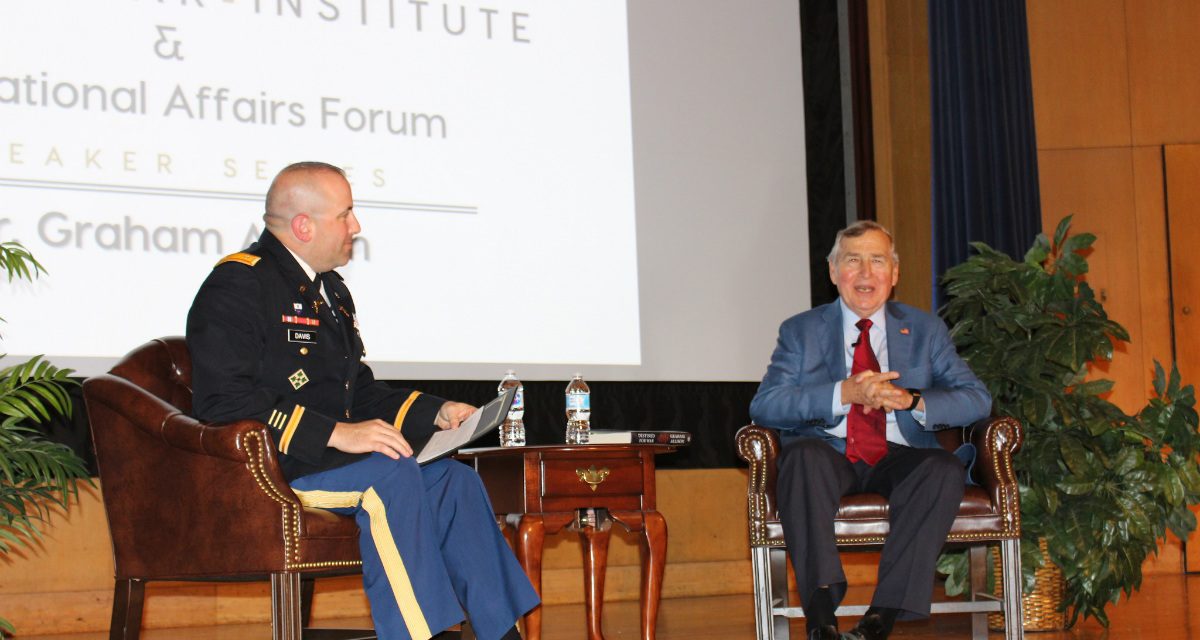 According to Dr. Graham Allison, the most significant world event of the last several decades was not 9/11 or the collapse of the Soviet Union. It was the rapid rise of China. Dr. Allison, the author of Destined for War: Can America and China Escape Thucydides’s Trap?, spoke to cadets in a packed Robinson Auditorium for a recent Modern War Institute Speaker Series forum, cosponsored by the Department of Social Sciences.

“Never before has a country risen so fast, so far, and in so many different dimensions as China,” Dr. Allison said. In his book, he lays out the case that while war with China is not inevitable, in historical cases where a rising major power eclipses a ruling power, twelve out of sixteen have resulted in conflict.

The logic of his argument is what he calls the Thucydides Trap. This is a reference to a passage in Thucydides’s History of the Peloponnesian War, in which the cause of that war was the rise of Athens and the fear this engendered in Sparta. A similar dynamic risks ensnaring the United States and China into a war neither may seek, yet which neither can avoid.

Dr. Allison, who is the former Director of the Harvard Kennedy School’s Belfer Center for Science and International Affairs, said he wrote the book not to be fatalistic but to provide a lens with which he hopes to prevent war. The past seven decades, which has seen no war among great powers, is a historical anomaly, he said, and something not to be taken for granted. To avoid a great power war with China and falling into the Thucydides Trap, he urged American policymakers “to stretch our imaginations.”

“If we expect business as usual, we will get history as usual,” Dr. Allison cautioned, and war with China, whether over North Korea or some dispute in the South China Sea, would be “catastrophic.”

Dr. Allison claimed that by any indicators (e.g., GDP by purchasing power parity), China has already surpassed the United States in power, and worried about how the United States will handle being the world’s second largest economy, when “it’s in our DNA to be Number One.”