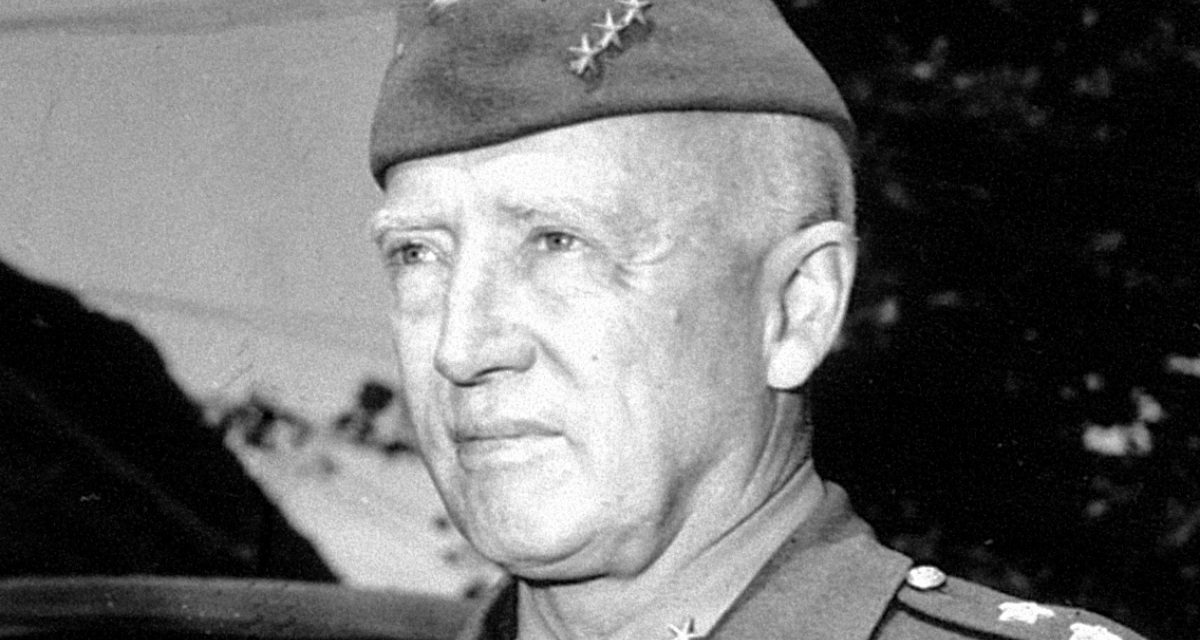 Gen. George S. Patton, Jr. liked to give it to them double dirty. When he wanted his men to remember something of importance, he laced it with plenty of profanity. As he put it, “You can’t run an army without profanity; and it has to be eloquent profanity. An army without profanity couldn’t fight its way out of a piss-soaked paper bag.” Probably his best known speech, which he delivered with small variations on numerous occasions, was laced with expletives. This speech has become part of American culture, due in great part to George C. Scott’s Oscar-earning portrayal of the general in the 1970 movie, Patton.

“The Speech” as Patton’s officers liked to call it, was full of “blood and guts” as well as plenty of cussing for effect. Patton was as much an actor as he was a fine general. He purposely cultivated what he called his “war face.” He was aware that his men were watching him constantly, and he strived to lead by his words as much as he did by his actions. Some officers found his use of obscenities in the speech disappointing, viewing it as unprofessional conduct. Patton’s onetime subordinate and later superior, Gen. Omar Bradley, was critical of his use of vulgar words and phrases.

The question of whether swearing is a powerful rhetorical device or a character blemish might seem trivial. But the art of leadership is not. And Patton was an extraordinarily gifted combat leader. He had an ability to motivate soldiers under his command to close with and kill the enemy in a prodigious manner. His main tactical dictum was to attack, attack, and attack some more. He was acknowledged by his enemy in World War Two, the Germans (who he called the Huns, harkening back to his World War One service days), as America’s best general. Indeed, in the time before Operation Overlord, Patton was the centerpiece of Operation Fortitude South, a deception plan devised by British Army planners. Patton was given command of the fictitious First US Army Group. This formation, complete with fake radio traffic, bogus subordinate units, and even inflatable replica tanks and aircraft, was devised to convince the Germans that Patton would lead the main assault in the Pas de Calais region of France, where the English Channel was narrowest. The operation was an unqualified success. Hitler left the outstanding German Fifteenth Army in that area of operations far too long, even though it was apparent that the Allies had invaded in strength in Normandy.

Patton was not chosen to command the D-Day operation. He had been severely criticized while commanding the Seventh US Army for slapping two enlisted soldiers in the invasion of Sicily during visits to two field hospitals. Patton attempted to shame the two soldiers and restore their obligation to duty. It has subsequently been conjectured that the soldiers were suffering Post Traumatic Stress Disorder, which was not diagnosed nor even clearly understood at the time. The Germans thought that this was American propaganda in the extreme, and they would never sacrifice their best commander for such a reason. More controversy followed, when Patton made comments at a rally at Knutsford, England on April 25, 1944 which were misquoted (some feel intentionally in an incidence of “fake news”) to appear that he had slighted the Russians in the future post-war new world order. Due to these incidents, Patton’s superiors questioned his competence to lead an army in the European Theater of Operations. It was finally decided he would lead the Third US Army when it became operational later in the campaign, as his abilities could not be spared. Patton subsequently led the Third Army with great distinction through the end of the war in Europe, and his reputation as a premier combat leader has been preserved by history.

Patton clearly projected the demeanor of a romantic warrior caught in a modern era. However, he lived during a very different time in America. While the study of many of his campaigns, articles, and quotes is highly encouraged for professional development among today’s leaders, not all of his qualities translate well into today’s command climate. The combat arms leader who drops the “F-bomb” or other uncouth phrases into every other sentence is a common stereotype. But junior leaders learn by example, including from senior leaders who find this acceptable.

The modern military leader is more accountable than ever for his or her actions—and words. My boss in Afghanistan was fond of saying, “Words matter.” In the highly charged political and social landscape in which we now live, there is precious little margin for error. As John Adams astutely stated, “Because power corrupts, society’s demands for moral authority and character increase as the importance of the position increases.”

In 2013, the garrison commander at Vicenza, Italy, Col. David Buckingham, was relieved in part for an altercation with Italian military police in which he repeatedly used inappropriate language during an incident at the gate. Buckingham was dismissed because he had “behaved unprofessionally and failed to treat the MP with dignity, qualities required of all commanders as the military modernizes.” In the same year, the US Navy relieved Rear Adm. Charles M. Gaouette, who led Carrier Strike Group Three. He was accused of “using profanity in a public setting and making at least two racially insensitive comments.” These are just the most high-profile examples. There are innumerable and readily available examples detailing other cases of relief for “conduct unbecoming.”

Military leaders must realize that they are role models and their soldiers, sailors, Marines and airmen are always listening, watching, and emulating. The “officer and gentleman” persona is as important today as it was when the phrase was coined by the British Army in the early nineteenth century. Failure to act as such is punishable under Uniform Code of Military Justice Article 133. Strong character is what defines an exemplary leader. As Gen. Matthew B. Ridgway said, “Character is the bedrock on which the whole edifice of leadership rests. . . . Without it—particularly in the military profession—failure in peace, disaster in war, or, at best, mediocrity in both will result.” His words hold as true today as ever.

Capt. Ron Roberts currently serves as the Assistant S32 (Group Analysis Cell) in the Asymmetric Warfare Group at Ft. Meade, MD. Prior to this assignment at AWG, he served as commander of Bravo Company, 404th Civil Affairs Battalion (Airborne) at Joint Base McGuire-Dix-Lakehurst, NJ. Capt. Roberts, whose primary branch is Armor, has deployment experience as a Civil Affairs Team Chief in Afghanistan. He holds a Master’s Degree and a Bachelor’s Degree in Education from Springfield College. Capt. Roberts has a wife and three children.