Dropping DIMEs: Leveraging All Elements of National Power on the Multi-Domain Battlefield 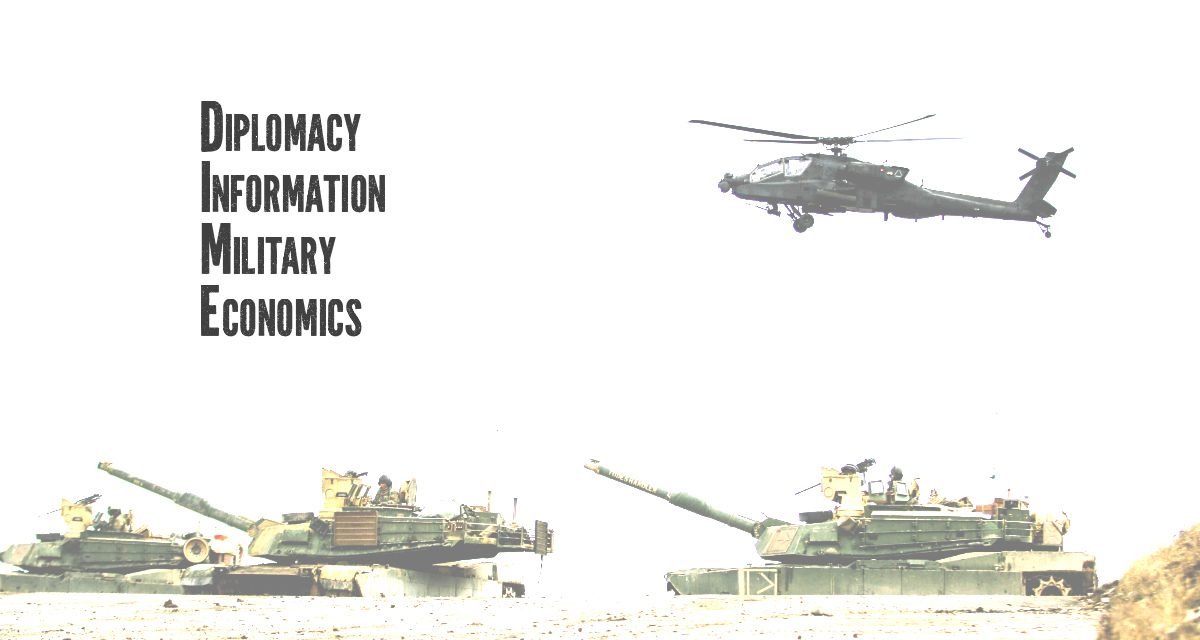 While the US Army continues to shift its focus from the stability operations that characterized America’s post-9/11 wars toward preparing for large-scale combat operations, our adversaries are working feverishly to ensure that the US military and those of our allies and partners will never be afforded the time or political capital to mass the combat power such operations would require. The Army’s emphasis on large-scale combat operations is built on an assumption that ground combat at scale remains a viable medium to achieve unconditional surrender against peer adversaries in the twenty-first century. However, since the unconditional surrenders of Germany and Japan in 1945, the world has iteratively progressed to an era where US competitors and peer adversaries have been able to establish a complex of integrated air defenses, cyber, rocket, drone, informational, proxy forces, and nuclear fires. This makes unconditional surrender increasingly difficult to coerce and massive, land-based thrusts deep into the enemy’s political capital extremely risky—and thus irrelevant as a military planning factor to achieve success in great-power conflict.

Today, ongoing operations in Ukraine, Syria, and Afghanistan, and disputes of varying but real significance between the United States and China, North Korea, Iran, and even Turkey, reveal that military strength alone is becoming less and less determinant of achieving national objectives. The notion that through overwhelming military force a nation or alliance can force total capitulation on an adversary is all but dead. Welcome to the era of highly contested negotiations in multi-domain operations.

For the United States to achieve optimal outcomes following a military conflict, it must converge all four elements of national power—diplomacy, information, military, and economics (DIME)—into a cohesive, multi-domain campaign plan before, during, and following military confrontation. Doing so would require the US State and Defense Departments to cooperate in in robust and innovative ways—for instance, by integrating diplomats, media officials, and economists into cohesive planning units (call them DIMEPTs—Diplomatic, Informational, Multi-Domain, and Economic Planning Teams). By converging multi-domain operations with the other elements of national power, the adversary will not just be forced to contend with multiple competing dilemmas, but be brought to the negotiating table under optimal conditions for the United States and its partners.

Currently, military campaigns are planned and executed by joint service professionals largely in isolation from diplomatic, informational, and economic elements of national power. The National Security Council, consisting of only the most senior-level leadership within the State, Defense, and Treasury Departments, is the first and last echelon for any discussion in regards to integrating the four elements of national power through time, space, or purpose. From here, department heads publish guidance and directives to subordinate leadership via intra-department channels (in DoD, through the chain of command), resulting in military campaigns that are planned largely separate from ongoing diplomatic, informational, and economic efforts by the US government, let alone those of allied nations. Forming collaborative mechanisms like the DIMEPT concept discussed above will help facilitate the integration of all elements of national power down to the lowest level possible within the operational environment. The Army’s combat training centers, especially when integrated with sister-service training exercises, are prime locations to practice this wholistic planning effort. State Department officials and those from other relevant agencies could rotate through these centers like their military counterparts in order to achieve exposure to military problem sets and be equipped to frame diplomatic, information, and economic campaign plans whose outcomes will be optimized when synchronized and converged with the military’s multi-domain operations. DIMEPTs at the combat training centers could consist of a rotating cadre of State Department diplomats, Army foreign area officers, joint planners from all military services, and even observers from the general officer corps and congressional staffs. Once assembled, a DIMEPT could use the Army Design Methodology to rapidly understand the operational environment, frame the problem, and build a collaborative operational approach that executes a synchronized campaign aimed at concluding with an optimized negotiated settlement with the adversary.

Army Techniques Publication 5-0.1, Army Design Methodology lays out a method for applying critical and creative thinking to understand, visualize, and describe unfamiliar problems and approaches to solving them. For the State and Defense Departments, integrating all four elements of national power to achieve optimal negotiation outcomes is a highly complex and increasingly important requirement to achieve US strategic objectives given the disappearance of unconditional surrender and its nearly unlimited diplomatic yield to victorious states. In a real-world case of war, during the beginning of hostilities, the State and Defense Departments would assemble trained DIMEPTs that would immediately begin executing Army Design Methodology to achieve a comprehensive, DIME solution to achieve an optimal negotiated settlement.

The teams would begin by defining the operational environment, including all actors and associated relationships, and conditions that compromise the current state. Next they would describe the desired endstate. From here, DIMEPTs would frame the problem in order to identify and understand the issues impeding progress toward the desired endstate. DIMEPTs then determine an operational approach to achieve the desired endstate. In identifying possible solutions, DIMEPTs may find that the enemy’s center of gravity may not be of a military nature—a conclusion a solely military body is less likely to reach. Rather, the center of gravity could be, for example, a public sentiment, a particularly important segment of the economy, or a powerful ruling elite. By working to identify the enemy’s center of gravity collaboratively with counterparts whose perspectives, by training and experience, lean toward non-military elements of national power , the US military is better able to understand how to provide a multi-domain solution to enhance the effects of diplomatic, informational, and economic efforts against the adversary. DIMEPTs would continue the execution of Arm Design methodology by ascertaining decisive points of the operation, determining approaches, identifying defeat and stability mechanisms, and developing lines of operation and lines of effort. DIMEPT-defined lines of operation will likely be mostly military in nature, leading to the control of geographic or force-oriented objectives, while lines of effort will lean toward diplomatic, informational, and economic efforts linking multiple tasks through a logic of purpose to achieve operational and strategic objectives.

From this point, DIMEPTs could transition to detailed planning, where lines of operation and lines of effort are tied together in time, space, and purpose on an execution matrix published at echelon throughout the unified DIMEPT chain of command. As an example, this execution matrix might show diplomatic meetings with allies of the adversary, timed to coincide with multiple official and social-media press releases; the military capture of key maritime trading vessels; cyber activities targeting key defense and government systems; and the beginning of an economic embargo. Details of these events will be planned by subordinate echelons throughout the unified DIMEPT chains of command.

By presenting multiple simultaneous dilemmas to the adversary through a comprehensive and detailed DIME approach, the US government and its allies would be in a far superior negotiating position without expecting large-scale combat operations alone to drive an adversary to the negotiating table. The US Army and the joint force as a whole should transition from focusing almost exclusively on increasing the lethality of large-scale combat in order to induce an adversary’s unconditional surrender—the viability of which is uncertain in the era of ubiquitous nuclear, cyber, and informational fires. To do this, the Defense Department should embrace opportunities for institutionalized collaboration with other government stakeholders to converge all elements of national power in achieving an optimal negotiated settlement for the United States and its allies.

Capt. Harrison (Brandon) Morgan is a Non-Resident Fellow at the Modern War Institute and an active duty Army infantry officer serving in the 1st Battalion, 18th Infantry Regiment. He commissioned from the United States Military Academy in May 2013. He served in the 82nd Airborne Division as an infantry weapons platoon leader in Iraq during Operation Inherent Resolve and deployed to Europe with 2nd ABCT, 1st ID, where he served as the Atlantic Resolve Mission Command Element Liaison to Lithuania.