Dust Off The Podium 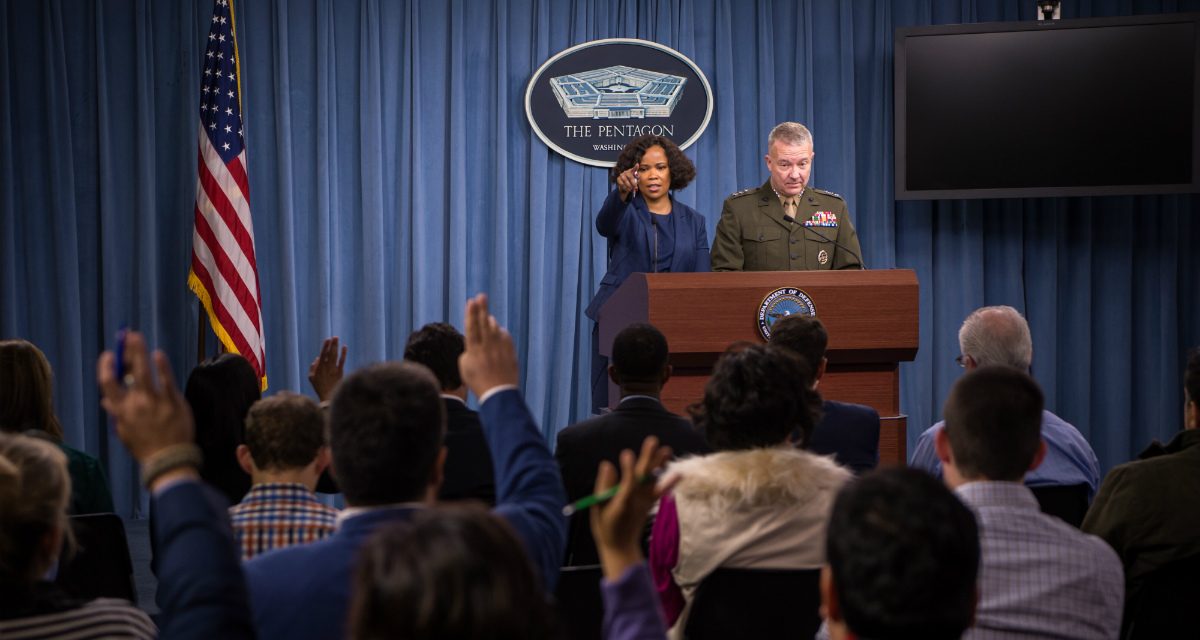 On Friday, April 19, the Modern War Institute posted an opinion piece by Army PAO Chase Spears, examining the responsibilities of the media in light of the nearly yearlong absence of a regular Pentagon press briefing.

I encourage everyone to read the piece and draw their own conclusions, but I think it is fair to say that it caused a reaction that was swift, broad, and, in most cases, critical.

Disagreements with Spears’s observations came in many flavors, and often echoed a growing chorus of concerns as the Pentagon’s commitment to transparency has waned. Some have argued that the Pentagon has given up valuable tools to inform and shape public opinion. Others, including former high-ranking uniformed leaders, have underscored the strategic advantages of an open and accessible press posture.

As the politically appointed former head of OSD public affairs, the nature of my concern was slightly different. What immediately struck me was how familiar the arguments being made, and the conclusions being drawn, felt. What was alarming wasn’t the language—it was hearing it applied in a new, and I would argue dangerous, context.

Questioning the motivations of reporters. Curbing access based on coverage. Changing practices in response to the rise of the punditry.

These are not new ideas, and in fact they are all too common in the environment where I spent much of my professional career—in the world of political campaigns. The fact that that way of thinking may be taking hold in the world of military public affairs is deeply concerning.

Military public affairs is, and should be, fundamentally different from political communications or corporate PR. It was a lesson I had to learn when I entered government. The disciplines, though they share many of the same tools and techniques, serve different purposes. Corporate PR is about sales and political communications is about winning elections—while military public affairs is, at its core, about accountability.

It leads with this basic statement: “It is Department of Defense policy to make available timely and accurate information so that the public, the Congress, and the news media may assess and understand the facts about national security and defense strategy.”

Working with the press can be frustrating—trust me, I have the gray hairs to prove it. Sharing information publicly when things go wrong can be difficult. To me, what this policy says is, “We understand that there will always be a push and pull between the need for transparency and the desire for control—and we know that the press won’t always cover what we want—but we are choosing to put our thumb on the scale in favor of transparency, even when it is hard.”

This isn’t to say that the military doesn’t have a vested, reasonable interest in telling a positive story about itself. Getting those stories out is critically important to recruiting, morale, and maintaining public support for our men and women in uniform. The military has more ways to do this today than ever before—community relations capabilities, in house “news” functions, the power of social media, and, when appropriate, working with the press.

But the desire to tell a positive story, and the means to do so, are not a replacement for the fundamental need for accountability through the independent media that lies at the heart of military public affairs.

Policy is great, but it is important to demonstrate the commitment to this basic principle through practice. A great deal of attention has already been paid to the lack of Pentagon press briefings, and those chafing under this scrutiny have pointed out that the military has many ways to get out information beyond the briefing room.

Putting aside the fact that transparency has been going in the wrong direction for a while at the Pentagon, this argument still misses the point. The briefing is important not just for what it is, but for what it represents. It is a symbol of the institution’s commitment to accountability. It is a way of saying, “We are here, and we are open to scrutiny.” The public nature of the briefing—available in person to any outlet with a credential, recordable and sharable—is a manifestation of the idea that DoD is open for your questions today, regardless of what you wrote yesterday.

Symbols matter, especially in large, complex, and geographically decentralized organizations like the military. When the center goes dark, it has a chilling effect on the entire organization—they see and read the symbolism. Commanders are less likely to talk. PAOs are less likely to push for access. And accountability suffers at every level.

So why should the public care? Why should a quieter military, or one that relies solely on the tactics and standards of PR when deciding to speak, concern Americans?

As others have pointed out, a basic commitment to accountability is foundational to an unwritten social contract between the citizenry and the military. It is our military—our daughters and sons, our tax dollars—so we deserve to know what’s up.

That should be reason enough, but in the long run a movement away from an accountability-based approach to public affairs is also bad for the military. It undermines the institution’s political independence. The slope from public relations to partisan posturing is steep and slippery, and the distance between partisanship and propaganda is short. To remain different—to not be sucked into the vortex that Spears points to—the military must act different.

In the end, policies and practices are important, but the commitment to any principle comes down to leadership. Just last week, the Pentagon announced a new assistant to the secretary of defense for public affairs, Jonathan Rath Hoffman.  I hope he has been paying attention to the conversation sparked by Spears’s piece, and I hope he will reach out to voices on both sides of the debate. We all love the institution, and though we may disagree, we are here to help. Ultimately, I hope he will show a commitment to accountability and transparency, and be a voice within the building for more press access. A great first step would be dusting off the podium.

Brent Colburn is Vice President for Communications and Public Affairs at Princeton University. He previously served as the Assistant to the Secretary of Defense for Public Affairs. He has worked for two decades in a number of mission-driven organizations, including stints in philanthropy, with the Obama administration, on Capitol Hill, and on numerous political campaigns.