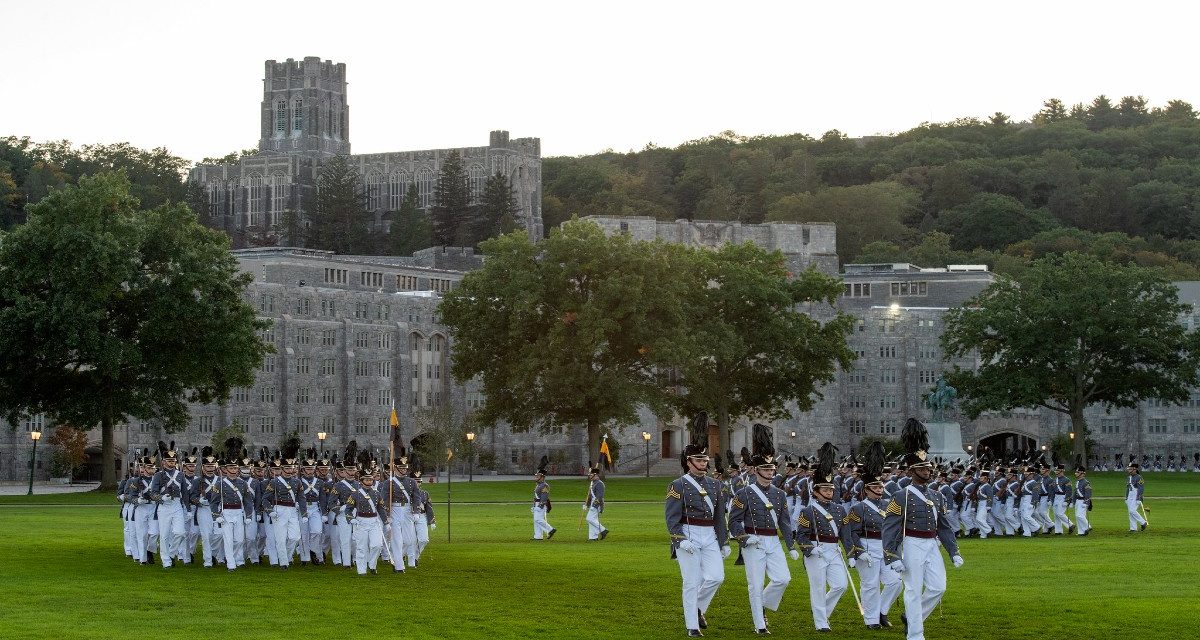 On April 28, the United States Military Academy hosted its twenty-third annual Projects Day, which featured cadet-led research projects and theses across the academic departments. Cadets participating in Projects Day produce a capstone project, often for an interagency or Army partner, or complete independent, original research for a thesis in their majors. Across the academy, more than four hundred projects were presented, many with direct ties to the Modern War Institute’s mission of generating new knowledge for the profession of arms and providing the Army and the nation with an intellectual resource for solving military problems.

The Defense and Strategic Studies (DSS) program at West Point is an interdisciplinary major that uses a wide array of methodological approaches from across the social sciences and humanities to address important problems related to conflict, war, and national defense policies. Faculty members from across West Point serve as advisors for these projects under the leadership of MWI’s research director, Dr. Max Margulies. Below are abstracts of the DSS cadet theses, which represent a key component of the research opportunities MWI provides cadets and demonstrates the West Point community’s potential to make important contributions to American national security.

“The Army on the Korean Peninsula: Lessons Learned for Force Structure,” by Dan Andreou

During President Trump’s administration, North Korea began testing and refining intercontinental ballistic missile technology on which to mount its newly developed nuclear weapons. As a result, the administration increasingly saw military intervention as an attractive option. In its preparations to execute its Korean Theater Operations Plan, the US Army became increasingly aware of the atrophy in large-scale combat operations skills which occurred during the Global War on Terror. Competency and capability shortfalls, readiness and certification misalignment of tactical units, and a lack of whole-of-government integration cast into sharp relief many issues which many planners felt could result in military defeat at the hands of North Korea. This thesis collects the experiences of some of the officers who worked on the operations plan and distills from them lessons learned for guiding changes to Army force structure at the division level.

“Command Uncontrolled: The Effect of US Civil-Military Relations on the Use of Force in Counterinsurgency,” by Konrad Babraj

The current norms of civil-military relations in the United States have been primarily modeled from Samuel Huntington’s The Soldier and the State. This discourse focuses on subjective versus objective control of the military and which style is more beneficial for modern democratic societies. However, relying on the extremes of a spectrum can often lead to negative outcomes, as this research project highlights. Using historical case studies from Vietnam and the Global War on Terror, this thesis determines that the trends of civil-military relations within the United States have led to unethical and ineffective uses of force in counterinsurgencies.

“Terrorists to Politicians: Understanding Insurgent Groups’ Transition into Politics in the Philippines,” by Caleb Burnett

“Opposite Sides of the Coin: Understanding the Unlikely Success of the FLN and the Failure of the LTTE,” by Josh Damir

What causes insurgent success? Is it possessing sufficient resources to sustain the fight? The counterinsurgent’s lack of commitment? The support of the people? While all crucial parts of insurgent warfare, none of these can explain the broad variation in results that insurgent groups experience. This thesis argues insurgent group success depends on its strategy of violence and whether that strategy addresses three contextual variables: regime type, state capacity, and insurgent resources. Using two case studies, the National Liberation Front (FLN) fighting the French in Algeria and the Liberation Tigers of Tamil Eelam (LTTE) separatists fighting the Sri Lankan government, this thesis finds that two typologies emerge. Strong states with democratic features are susceptible to widely publicized terrorism campaigns, and weaker states with autocratic features are more susceptible to drawn-out campaigns of guerrilla warfare.

How do cartels interact with the civilian population? This thesis created a descriptive typology of three ways in which Mexican cartels seek to control the behavior of civilian populations. A predatory violence strategy uses spectacles of violence to gain control through fear. A Mafia strategy enables a cartel to purchase compliance. An ideological-commercial insurgency competes with the state for political, economic, and military legitimacy. With three case studies chosen to exemplify each strategy based on wide research of cartels in Mexico, this project serves as the basis for a new direction of studying the challenges that cartels pose to Mexico and organized crime more broadly.

“The Silent Killer: The Rise of Domestic Terrorism in the 21st Century,” by Branden Harder

The twenty-first century has brought about a new wave of domestic terrorism in the United States. Since 2000, there has been a steady rise in the amount of domestic terrorist attacks carried out by American citizens. This thesis focuses on explaining this sharp rise in domestic terrorism. Furthermore, it specifically examines the radicalization process to demonstrate the causal pathway for individuals seceding to become violent. Using the case studies of Oklahoma City Bomber Timothy McVeigh and Charleston Church shooter Dylann Roof, this thesis shows that radicalization has become much faster because of technology and higher levels of societal extremism. Together, these two conditions create a society that is much more willing and capable of engaging in domestic acts of violence.

“The Strategic Significance of the Uyghur Genocide in Xinjiang,” by Jacob Lapin

The People’s Republic of China (PRC) has expanded its means to systematically repress the Uyghur people within the Xinjiang Autonomous Region (XUAR). Through declaring a “People’s War” against “separatism, terrorism, and extremism” in 2014 and banning many benign cultural practices, the Chinese Communist Party continues to tighten its grip on the region. Analysis of America’s National Security Strategy (NSS) through multiple presidential administrations yields a progression of strategic thought regarding China. With the transition of presidential administrations, America’s NSS is in flux. This thesis addresses the strategic implications of the Uyghur genocide, recognizing the reformation of American strategy under President Biden’s Interim National Security Strategic Guidance. Despite the United States’ decision to label Chinese actions as genocide, the United States’ economic, political, and diplomatic ties with the PRC largely prevent effectual strategic courses of action from being implemented. This paper will juxtapose former President Trump’s strategic guidance with President Biden’s interim guidance and how they relate to America’s national interests with regards to the Uyghurs. Finally, it argues that the United States must take productive and practical measures to prevent global apathy to a state-sanctioned genocide.

“Dangerous Connections: A Study on Drug Smuggling and Human Trafficking within the Crime-Terror Nexus,” by James “Kyle” Mathis

Central to the United States’ national security policy remains the threat posed by foreign non-state actors, specifically terrorist organizations. These threats to national security remain a priority for US strategists as shown in President Biden’s Interim National Security Strategic Guidance, which specifically states that “despite significant successes against international terrorism, a diffuse and dispersed threat to America remains” and further places special emphasis on a crackdown aimed at “illicit financing” that funds terrorism. This research explores the financial connections between prominent criminal organizations in Latin America and active terrorist organizations with roots in the Middle East. Using Hezbollah as a case study, data was drawn from a variety of sources to determine the extent of cooperation within the crime-terror nexus from 2009-2019. In addition to open-source news articles, academic papers, and government hearings, a series of interviews with US special operations personnel in Colombia provide a clear overview of the level of activity present within the region. The findings show a significant level of cooperation by criminal and terrorist groups relating to weapons and drug trafficking throughout Central and South America. While these would seem unlikely partners, the interviews assisted in providing an explanation for the motivations of these groups to work together. Through an understanding of the present threat, recommendations are made for US policy makers to maximize the effectiveness of the US effort to disrupt these relationships.

“An Ace in the War of Nerves: State Targeting of Noncombatants in Warfare,” by Nathan Miles

An important subset of civilian victimization is when state’s adopt policies centered around the deliberate killing of noncombatants in warfare. Strategies that target civilians are inefficient and universally immoral, so why do states choose to target noncombatants? Previous research divides explanations into either political–such as views of the enemy or regime type–or military–such as viewing civilians as a center of gravity. This paper explores two case comparisons of strategic bombing in World War II to test existing explanations for necessity and sufficiency. The chief finding is that existing explanations, while necessary, are not sufficient. An additional explanation – decisionmaker perception of public opinion–is necessary to sufficiently explain why states target noncombatants in warfare.

As is so often the case with research, the final shape of these projects often differed from what their authors expected when they set out. It is a challenge for even experienced scholars to transition from a broad or amorphous interest to a narrow, well-defined research question that can support a rigorous methodological design. Throughout the year, DSS cadets successfully navigated this process by letting their passion for policy-relevant research be their guide. When they encountered obstacles on their road to building arguments and testing theories, they found that returning to the initial problem that sparked their interested kept them on track.

This year, those problems coalesced along two themes: civilian violence and force modernization. With the American vision of strategic competition and the future of conflict taking increasingly clear shape, it is not surprising that many cadet projects focused on what the Army needs to do to meet future challenges. The widespread interest in how violence affects civilians is a reassuring theme to observe in the next class of American army officers. Together, these two themes should make us confident in these budding soldier-scholars’ commitments to finding ways to ethically project American power and solve today’s most pressing national security problems.

Cadets began these projects in the shadow of an upsetting end to two decades of American efforts in Afghanistan; none of them remember a time when the United States was not at war. Their understanding of the American military and its role in the world was turned upside down when Kabul fell on August 15, the day before the start of the fall semester at West Point. Their interest in defense and strategic studies was indelibly shaped by this conflict, resulting in fascinating and impassioned projects about counterinsurgency, non-state actors, and a world defined by new, great power challenges. They presented their projects nearly two months into an entirely different type of conflict, watching from the sidelines as a vastly under-resourced Ukraine held off invading Russian forces. Yet the lessons they drew from their research remain relevant for and provide important implications for the future of warfare.

Dr. Max Margulies is the director of research at the Modern War Institute at West Point.

Lt. Col. Keith Carter, PhD, is the director of the Defense and Strategic Studies program at West Point.