Everything Old is New Again: Flawed Thinking About the Future of War 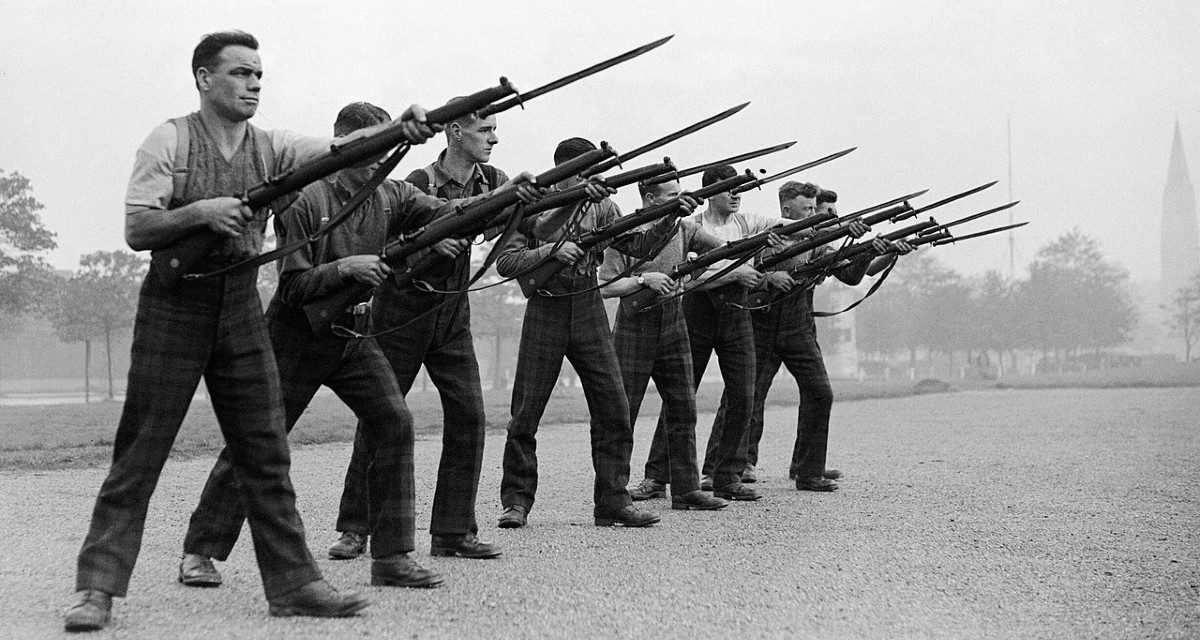 We therefore conclude that war does not belong in the realm of arts and sciences; rather it is part of man’s social existence. War is a clash between major interests, which is resolved by bloodshed—that is the only way in which it differs from other conflicts.

War, as the often-misquoted old Prussian states, is a social activity; neither an art nor a science, its delivery is as much affected by human appetites, tastes, and moods as it is by scientific principles. Military history is littered with examples of warfare conducted, conceptually and practically, without recourse to pertinent evidence or analysis. What’s more, war conducted at the whims of presentism, fashion, and the prevailing zeitgeist are not things of the past, remnants of an unenlightened age; contrary to the belief of at least one postmodern military commander, today’s operations are often built upon the preferred flavors and mythologies of past experience rather than empirical observation.

In 1853, the British explorer and polymath Sir Richard Burton published a book, A Complete System of Bayonet Exercise. In it, Burton made the case for practical training in dueling with the bayonet, and also reflected an emerging taste for field training moving away from the practice of intricate drilling on the parade ground that had been central to military training since the days of Gustavus Adolphus. An officer in the army of the Honourable East India Company, Britain’s privatized government on the Indian subcontinent, Burton had little experience of the use of the bayonet. His visionary gift was neither practical nor researched. Rather, it was based on a keen sense of the prevailing taste of his age and a gift for publicity. Attracted by the nobility of single combat and the joust, the British Army rapidly adopted Burton’s ideas and would make bayonet dueling a mainstay of military training until the mid-twentieth century.

The problem with the Army’s decision was that the available evidence contraindicated dueling. In Paddy Griffith’s book, Forward into Battle: Fighting Tactics from Waterloo to the Near Future, the author’s exhaustive research makes clear that even at the height of the Napoleonic era the bayonet’s utility was largely psychological. Battle was decided by a mixture of artillery, the volley fire of massed infantry, and the bayonet charge; bayonet fighting was rare and almost never took on the character of a duel—the most likely outcome of a determined bayonet charge was to find a field strewn with kit and accoutrements when the smoke of battle cleared. The bayonet was critical to the rout, not the contact; there is no evidence of an Arthurian melée in what should have been the laboratories of the Napoleonic era. Indeed, the evidence that the bayonet was a weapon of intimidation was vetoed by the fancies and preferences of men immersed in the romanticism of the Gothic Revival.

Professor Anthony King, in his book The Combat Soldier, and Aaron Miedema, in Bayonets and Blobsticks: The Canadian Experience of Close Combat 1915–18, are clear, however, that although the effectiveness of the bayonet in the early twentieth century may have been understated, the bayonet was rarely used as Burton and the training manuals intended. Despite significant evidence that bayonet dueling on an Industrial-Age battlefield was beyond unlikely, it remained a key aspect of training and tactics as a physical weapon throughout the Second World War. In this respect, the prevalent taste and a cultural preference for imagined Gothic heroism would be more important than observed truth when preparing soldiers for war.

The insidious grips of fashion and conservative preference are not reserved for tactics, techniques, and procedures. Neither are they historical phenomena preserved in aspic as artifacts of a bygone age. At the operational and strategic levels, even the most revolutionary changes in politics, concepts, and doctrine often overlay deep-seated cultural and organizational preferences. In the 1920s, theorists of the Soviet Union’s Red Army developed the concept of Deep Battle, using thinking latent from the Tsarist era, which recognized that modern conventional warfare had ceased to take place either at a geographical point, as in the time of Napoleon, or as a linear phenomenon, as observed in Industrial-Age warfare.

Military thinkers like Mikhail Frunze, Vladimir Triandafillov, and Mikhail Tukhachevsky postulated that in future warfare, victory would come to the side that broke through the full depth of its opponent’s defense, not at a single point or across a broad crust. Interestingly, however, Soviet Deep Battle, the product of revolutionary thought, and harshly critical of “capitalist warfare,” saw the breakthrough as being predominantly achieved by waves of infantry, massed artillery fires, and the shock of cavalry, rather than by a combination of mechanized armor, infantry, and airpower. In short, despite labored claims to the intellectual superiority of Marxism, and the avowed destruction of the thinking of the ancien regime, Russian military culture and society demanded an attachment to manpower, mass, and attrition rather than maneuver and precision mechanization in the facilitation of the breakthrough. Doubtlessly, Soviet experience in the Second World War would teach the value of mechanization and technology, but mass, not precision, would remain the touchstone of the Russian military into the twenty-first century.

It would be convenient to think that these tendencies are restricted to the West’s opponents, but Western military thinkers would be well advised not to read the preceding paragraphs with a sense of wry superiority. In the 1980s, with the experience of Vietnam behind it, and with lessons taken from the Arab-Israeli wars of 1967 and 1973, the United States Army developed the doctrine of AirLand Battle to counter Soviet strategy, still heavily predicated on the precepts of Deep Battle. America, and her European allies, adopted the doctrine universally, along with a professed belief in maneuver and mission command. The problem was that when closely examined, as it was by Robert Leonhard in his inspired book, The Art of Maneuver: Maneuver-Warfare Theory and AirLand Battle,” it became apparent that, for all the statements in support of the superiority of maneuver, the actual practice remained the prosecution of attrition warfare, mirroring capabilities and using precision munitions to destroy as much of the Soviet enemy as possible. In that, it reflected the practices and cultural preferences held by the United States Army since at least the American Civil War. In short, prevalent military and societal cultures proved too strong for enlightened concepts.

That the problem of the dominance of culture over evidence remains is evidenced by the precipitate return to conventional warfare as the basis of military training after the end of offensive operations in Afghanistan in 2014. Today, maneuver and its components—pre-emption, dislocation, and disruption—are mantras readily repeated across all Western militaries, but the key measure of operational success remains its antithesis, destruction. In the twenty-first century, when faced with much more complicated operating environments than the North German Plain and the Fulda Gap, Western militaries continue to default not to the widely espoused concept of maneuver, but to firepower and attrition, albeit supported by satellite-enabled precision munitions. The West might like to think it fights smart, but whether in southern Lebanon, Iraq, or Afghanistan, it readily falls back on materiel and mass as its dominant concept. Imagine if you will the destruction wrought had the opposing acolytes of mass met in battle in central Europe in the late 1980s—an unstoppable force meeting an immoveable object.

Thus far, we have considered the underlying conservatism of military organizations and the effect that their inherent reactivity has on military performance, but thinking back to Sir Richard Burton, it is clear that today’s reactionaries are reflecting the attitudes and preferences of the past’s progressives. Paradoxically, while militaries are wedded to concepts and doctrines with which they are comfortable, they are also attracted to the shiny and new. Presentism, the belief that current circumstances are unique and unprecedented, infects almost every aspect of postmodern military thinking, albeit to a greater or lesser degree across national boundaries. In recent years, would-be military philosophers have dined-out on the supposed changing nature of warfare and an expansion in the number of domains of war. The truth is, however, far less prosaic; war’s nature remains political and its effects are only felt where humans live.

The effect of presentism has not just been felt in high concepts. At the strategic, operational, and tactical levels, apparent novelties such as information maneuver, cyber warfare, and gray-zone operations have used up considerable intellectual oxygen. To be sure, these observations are important, but are in fact little more than a repackaging of timeless artifacts of political maneuver—sabotage, espionage, and propaganda with a microchip inserted. As such these novel concepts are essential parts of all warfare, not its replacement.

In conclusion, the twin menaces of intellectual conservatism and neophilia, both of which have dogged militaries for centuries, are alive and well today. There is ample evidence that the character of warfare is changing, but this must be seen against a backdrop of history, a history that has seen many changes in warfare across the millennia; success in future war lies not in the pursuit of disconnected novelties, but with interpreted evidence divorced from service culture. If militaries can divest themselves of a preference for outmoded ideas of how they should behave, they can be molded to fight the wars of the twenty-first century independent of the fashions of the nineteenth.

The views expressed are those of the author and do not reflect the official position of the British Army or United Kingdom Ministry of Defence, or the United States Military Academy, Department of the Army, or Department of Defense.