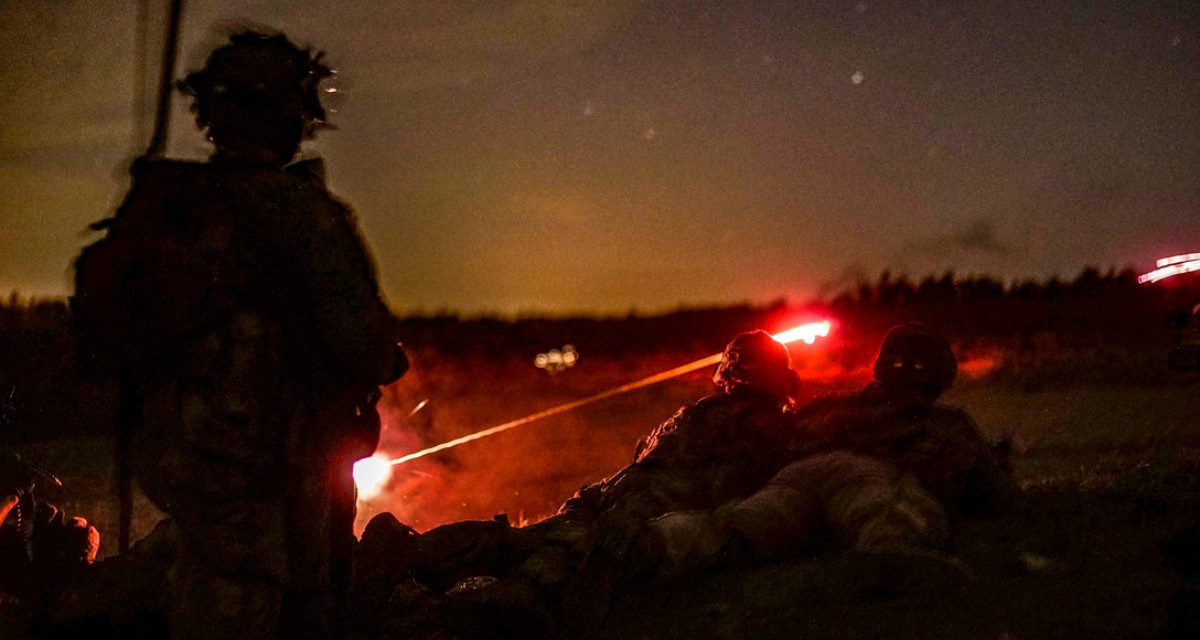 When it comes to budgets, the question is not if the Department of Defense will experience reduced funding, but how soon and by how much? The US military, it has been argued, is better suited to weather huge swings in funding than most other government institutions. The budget sequestration triggered in 2013 might seem to be the prime example of that assertion. Though the Department of Defense was not the only entity to suffer drastic drops in funding or experience lasting impact from that jarring exercise, it (arguably) came out the other side as a still-capable force. Operational ready rates suffered and exercises to certify units at all tactical levels were disrupted, but the Army, Air Force, Navy, and Marines by no means ceased to be a formidable force in the world. However, the short-lived sequestration was only a rehearsal for what all beneficiaries of federal discretionary funding will endure in the coming decades.

The numbers are clear. The Congressional Budget Office (CBO) is the best source of data describing the impact of US economic and political vicissitudes on federal revenues and outlays. CBO regularly produces projections across most facets of the government to give lawmakers, officials, and the general public an idea of where the budget is heading up to thirty years into the future. Notably, the most recent thirty-year projection has some stark realities for the Department of Defense.

Figure 1 reveals a bleak future for the facets of government that rely on “other noninterest spending” (mostly consisting of discretionary spending on executive branch departments like Defense, State, and the Treasury). As nondiscretionary spending on things like Social Security, Medicare, and Medicaid takes up more of the federal budget over the next thirty years, discretionary spending is gradually suppressed. While “other noninterest spending” accounts for 47 percent of the federal budget in 2019, CBO projects that proportion to be reduced to 33 percent, in 2050. Notably, as of 2019, over half of all discretionary spending ($676 billion of $1.3 trillion) goes to the Department of Defense. In short, each year the Department of Defense gets a big chunk of a specific piece of the budgetary pie, but that piece of the pie will get smaller every year.

CBO also projects the US economy is essentially powerless to keep up with the increasing demands of government spending under current conditions, laws, and policies, as Figure 2 shows. Thus, the bulwarks of American international primacy, the Departments of State, Treasury, Defense, and Commerce, will be eroded away year by fiscal year. This issue has not gone unnoticed by many former leaders from the executive branch.

The Peter G. Peterson Foundation formed a council, the Coalition for Fiscal and National Security, which reads like a who’s who of former senior figures and attempts to sound the collective alarm on the trajectory of the US federal budget and the long-term threat it poses to national security. Former Secretary of State Madeleine Albright, former Secretaries of Defense Robert Gates and Chuck Hagel, and former Chairman of the Joint Chiefs of Staff Adm. Mike Mullen are among the esteemed members of this group seeking to sway lawmakers away from potential disaster. Despite their best efforts, little practical improvement has been made.

The Department of Defense cannot afford to ignore this potential threat to national security especially in the face of rising threats from China, Russia, North Korea, and Iran, as well as the enduring threat from violent extremism. However, the key question becomes how it can continue to provide security and stability to America and her allies across the globe with less money than it does now. This challenge will only be compounded further amid future developments, which could range from increasing stakes in cybersecurity to nuclear proliferation to continued instability in the US Africa Command and US Central Command areas of responsibility.

There are certainly no clear-cut answers to this problem. However, a change in appreciation of the cheaper forms of defense and deterrence will be a great launch point. Here are nine suggestions the Department of Defense can explore to find cost savings, diminish inefficiencies, and ultimately maximize its readiness for a diverse and dangerous threat landscape in the face of substantial budgetary pressures.

The desire for the United States to retain unparalleled military capability and maximum flexibility comes at an extremely high cost. Continually upgrading and updating hundreds of platforms across the force in more and more sophisticated ways carries a hefty price tag. Curbing the financial appetite for the constant pursuit of the most advanced [fill in the blank] will undoubtedly reduce the defense budget in the short and long term.

Technological shortfalls can absolutely be made up by providing training to soldiers, sailors, airmen, and Marines. Confidence in and mastery of good equipment is a combat multiplier. Likewise, poor training coupled with complicated, unfamiliar equipment is a recipe for disappointment—if not disaster.

One of the biggest advantages the United States has is its vast array of allies across the globe. With these allies comes the opportunity to capitalize on each country’s strengths. The United States can alleviate some defense budget pressures by encouraging NATO to collectively designate proponents for various functions of defense across the alliance. This has the added benefit of changing the narrative over contributions to the common defense. Spending targets serve a purpose, but it becomes less important whether each member spends an arbitrary 2 percent of its GDP on defense if that member clearly provides specific capabilities to NATO that it may be uniquely efficient at delivering (e.g., Estonia’s cyber capability).

If there is one area on which we must spend a preponderance of the defense budget, it is prioritizing the platforms that keep the homeland safe. The United States spends the majority of its time operating in Phase 0 (Shape) and Phase 1 (Deter) of the joint phasing construct. That is also where US adversaries probe and attack (i.e., below the threshold of armed conflict). It is incredibly cheap, and sometimes lucrative, for adversaries to act in these spheres. These should be emphasized while the United States is not engaged in large-scale combat operations.

5. Ensure national production rates can expand in a crisis.

If the previous recommendation is taken, the coinciding risk is an atrophying of maneuver forces due to reduced spending. Even with high-quality, low-cost training, making maneuver forces a lower priority will come with reduced capability. This was the case leading up to World War I, World War II, and the Korean War, for example. However, ensuring the ability to quickly expand the United States’ vast industrial capacity to produce more bombs, bullets, mortars, and rockets will help to offset this effect and deter adversaries from engaging in large-scale combat. (It’s important to note that these should be produced as “dumb” munitions. GPS guidance and ultra-sophisticated hypersonic missiles provide great capability, but at a cost of both time and money. US forces supporting partners in Syria shot more munitions like the Hellfire than production and resupply could sustain. If large-scale combat scenarios are realized, low-cost, mass-produced dumb rounds will be needed so US combat operations are not forced to halt and wait on the next $1 million missile to roll off the production line.)

Again, the key US advantage is not the technology it can bring to a fight but how many friends it brings. The United States may be at a numerical disadvantage against an adversary on the battlefield. But, if nearly unbreakable relationships with allies and partners can be maintained, along with institutional knowledge on how to operate in concert with each other, this will go a long way toward compensating for such a disadvantage. Regular combined exercises and a wide range of training programs is a vital piece of maintaining those relationships and the necessary interoperability.

7. Elevate special operations to membership on Joint Chiefs of Staff.

Special operations may be one of the most expensive components of the Department of Defense, but it is also the most capable and flexible. US Special Operations Command is uniquely situated to provide kinetic and nonkinetic support to allies and partners throughout the world and offers a pointed, strategic means with which to shape the international environment before large-scale combat operations begin.

8. Reduce the number of maneuver units.

This recommendation is focused on the Army, but could conceivably be applied to the Navy with its destroyers or the Air Force with fighter and bomber squadrons. These units are expensive to man, equip, and train, and should be expanded in times of war only. CBO’s Interactive Force Structure Tool offers a useful way of depicting the impact of adding or subtracting various units to the US military.

The trouble with recommendation #8 is the risk that comes with the deactivating fighting units and potentially losing years or decades of experience and institutional knowledge with the loss of personnel. Increasing the number of security force assistance brigades (SFABs) can help mitigate this risk. Today, these are solely Army units, but a similar template could be applied to establish Marine, Navy, or Air Force units with a security force advisory role. This would support recommendation #6, by aligning multiple SFABs across geographic combatant commands to work closely with partners and allies. Equally importantly, in case of war, the leadership of these units will already exist as a skeleton around which entire combat units could be built relatively quickly. Such an approach would not be without growing pains, but the Army’s has already implemented several SFABs and the results are certainly positive.

Collectively, these recommendations point to two overarching requirements that will emerge in the face of substantial budget cuts: reducing personnel and systems while also increasing flexibility. These recommendations are not made lightly; implementing them would mean major, even transformational, changes for the US military. However, if the Department of Defense does not begin conceptualizing ways of redefining the role and capabilities of the US military, budgetary pressures will likely force that decision in the long run. It will be in America’s interest to shape that process now rather than in the throes of economic upheaval, the challenges of a future war, or both.

Charles Dvorak is a student at the US Army Command and General Staff College. He is an infantry officer in the US Army and holds master’s degrees in international relations from Oklahoma University and organizational psychology from Columbia University.