Fight for the City: Creating the School of Urban Warfare 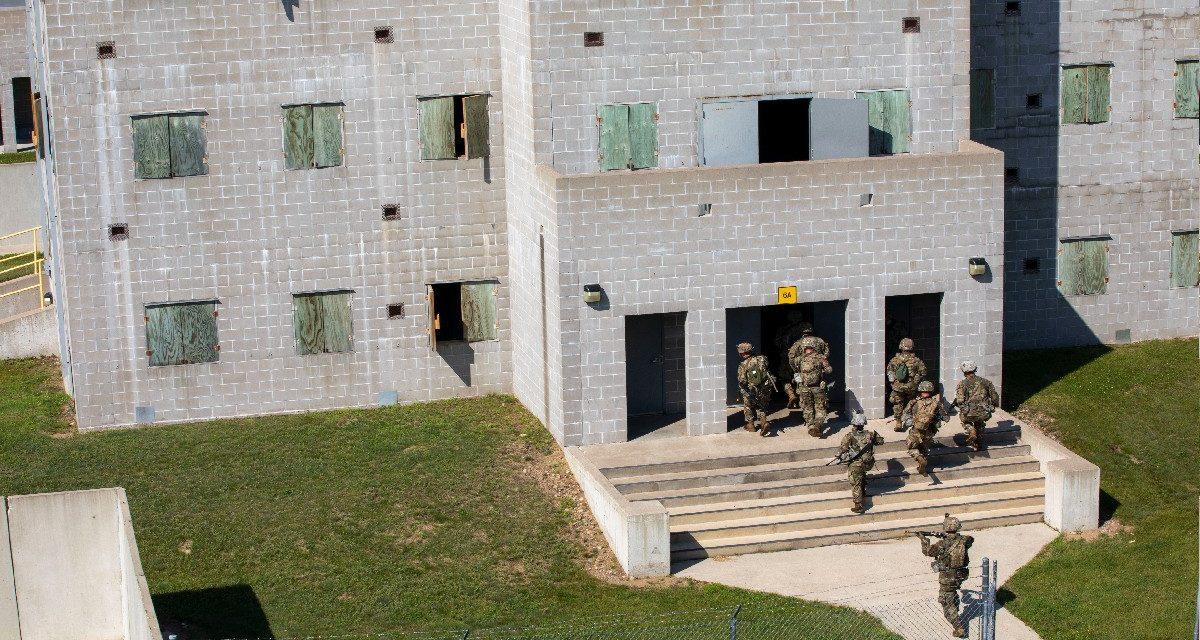 In 2016, then Chief of Staff of the Army General Mark Milley remarked, “The American Army is probably going to be fighting in urban areas. We need to man, organize, train and equip the force for operations in urban areas, highly dense urban areas, and that’s a different construct. We’re not organized like that right now.” Six years later, Russian failures in urban operations in Ukraine have added weight to Milley’s statement. Ukrainian resistance in Kyiv and Mariupol slowed Russian advances and helped continue the war. Milley’s prognosis and the implied tasks therein still have not been fully implemented by the US Army. To prepare for the future urban fight and to avoid Russian-type struggles, the Army needs to improve its urban warfare proficiency through the creation of a school of urban warfare, concurrent with the development of an urban combat training center. While the US Army has extensive recent experience in urban operations, most notably in Baghdad, there needs to be continued emphasis and further development on the specific skills and training needed for the demanding and dynamic requirements of urban combat.

The complexity of urban terrain and the presence of civilians in an information- and media-dense environment pose significant complications for armies. Reconnaissance and surveillance technologies are hampered as communications systems face increased electromagnetic interference. Even a stronger opponent’s firepower advantages are largely negated as more rubble makes an attacker’s movement more difficult. Large-scale combined arms operations are extremely difficult in the canalized terrain, pushing large-scale operations down to the platoon and squad level. Whereas in the past, military doctrine largely recommended bypassing built-up urban areas, steadily increasing populations and population densities in megacities are quickly making this an impractical approach. In 2018, General Milley declared that the future of war was in the cities. “We have to adapt the American way of war to the unique reality of future combat in highly dense urban areas,” he said. Then, in April 2022, he testified before Congress, stating that “urban battle is going to dominate land combat in the future.” Others have also championed the idea of an urban warfare school and training center and even a specialized urban warfare unit. Yet, despite these voices nothing has happened.

The School of Urban Warfare

The Army has a plethora of tabs, badges, and additional skill identifier courses for nearly every type of fighting—except urban warfare. While there are small-unit tactics schools for leadership like Ranger School, skill schools like Sniper School, capability schools like Air Assault and Airborne Schools, and even courses for digital battlefield management like the Digital Master Gunner Course, there are no urban equivalents. In 2018, Master Sergeant Eric Linn made the case for a standardized training proficiency for urban warfare through an urban master training course. His proposed course would provide Army staffs with urban operations subject matter experts vetted through a standardized, accredited format, creating small-unit leaders institutionally proficient in developing, executing, and supervising training and implementation in an urban environment. Commanders would obtain a principal advisor on urban operations and tactical units would receive highly trained and competent small-unit leaders.

The California Army National Guard’s 40th Infantry Division has displayed critical initiative in filling another identified gap by creating a week-long Urban Planners Course with two iterations being run to date. This course’s expansion and adoption is needed to proliferate urban warfare expertise. The Army should adopt and expand the course to three weeks by creating a school of urban warfare, merging Linn’s proposal with the Urban Planners Course. Additionally, the Special Forces Advanced Urban Combat course, a three-week long course, has elements that should be adopted for the school of urban warfare.

The school ultimately would create individual soldiers who return to their units as experts in planning urban operations and certified to conduct effective urban training. The proposed course identifies and fills the gaps that exists between Army Techniques Publication (ATP) 3-06, Urban Operations, ATP 3-21.8, Infantry Platoon and Squad, and Training Circular 90-1, Training for Urban Operations and the practical implementation of training to these standards.

The school’s curriculum would start with a basic introduction to Army Design Methodology and red team techniques, along with deliberate planning through military decision-making process repetitions. Along with this focus on staff planning, the course would train students to plan and operate in a wide variety of dense urban terrain. Enlarging the curriculum and expanding the timeline allows for broader exposure to diverse dense urban terrain, to include subterranean terrain, and the intricacies of sprawling seaports and airports, as well as interactions with civilian authorities and nongovernmental organizations present in urban areas and skills in urban logistics, communications, and engineering.

In addition to the first two weeks of planning and practical application, a third week would certify leaders in a train-the-trainer model. This phase would qualify individuals on setting up the technical and tactical requirements for shoot-house operations, establishing unit training standards, and instructing close-quarters combat essentials, among other skills.

While the 40th Infantry Division’s partnership with the nearby National Training Center (NTC) for its current Urban Planners Course is constructive, the characteristics of dense urban terrain with a significant subterranean aspect are not sufficiently available, in terms of both time and resources, at NTC. A world-class urban-specific training center needs more than NTC or its counterparts can offer. Creating an urban warfare training center also meets the National Defense Authorization Act (NDAA) 2020 directive to establish an urban warfare center.

While typical sites for training military operations in urban terrain at Army posts and CTCs are adequate for training small units, they simply do not possess the scope and scale of sprawling size, density, and complexity of modern urban environments. A larger site is needed that can host multiple battalions and brigades at once across a dense multidomain urban environment. The Israel Defense Forces’ National Urban Training Center in Baladia City, Israel is an example of the size and scope more appropriate to an urban training center.

Ultimately, the Army needs units, not individuals, to come through its urban training center and receive certification at company and battalion level for urban operations over a three-week rotation. At an Army urban training center, rotational training units should arrive with squad- and platoon-level urban proficiency and be led and staffed by graduates of the school of urban warfare. While urban warfare training requires extensive dedicated resourcing for ranges, ammunition, demolitions, lodging, opposing forces, and observer-controller staffing, there are viable options already available for the Army to use rather than starting from scratch.

Muscatatuck Urban Training Center (MUTC), an Indiana National Guard facility near Camp Atterbury, provides a combined urban and rural training environment, and is the Department of Defense’s largest urban training facility. Muscatatuck started as a real city and provides rotational training units with the full range of multidomain operations with purpose-built physical infrastructure and an integrated and closed cyber environment with electromagnetic effects system. The installation training site spans a mixed urban and rural environment of one thousand acres with nine miles of roads and more than 190 permanent structures. There are nearly two miles of tunnels throughout and a cave complex to support subterranean training. For multidomain considerations, the site includes a 185-acre reservoir, a cyber range, and managed airspace. In the past, MUTC has even supported units with customized role-players to fill the urban environment, adding the unpredictability and realism of the human element with densely populated civilian terrain. In 2019, the United States Marine Corps even used MUTC for a combined US-British urban exercise for Project Metropolis II.

While MUTC has the base for becoming the Army’s premier urban training center, expansion is necessary to support the additive throughput this would bring. Adjoining Camp Atterbury has existing life support sustainment facilities such as barracks space, dining facilities, and motor pools. Camp Atterbury, however, supports more than MUTC and will likely need infrastructure improvements and physical facility expansions. Additionally, an increase in staffing for MUTC is required. MUTC has a resident observer-controller/trainer (OC/T) element in Operations Group Wolf (OGW). OGW, however, is designed around support to the Army National Guard’s exportable combat training center concept, and therefore is focused on the squad and platoon levels. To provide for company-level and higher training, OGW needs additional personnel assigned to support those levels and staffs or further augmentation from outside support, such as the training unit’s higher headquarters. With requisite expansion, Camp Atterbury, MUTC, and OGW are an ideal existing foundation to assume the mantle of the Army’s premier dedicated urban training center for the total force.

It is not unprecedented for the Army to make an Army National Guard facility a primary training site for the total force. Previously, it did so with the US Army Mountain Warfare School at Camp Ethan Allen, in Jericho, Vermont. The school regularly instructs the total Army force structure in basic and advanced military mountaineering. Starting in 1994, the Vermont Army National Guard’s mountain warfare course was identified as the skill identifier–producing course. In 2003, the school was incorporated into the Army’s Training and Doctrine Command (TRADOC). A similar process of accreditation and command support training relationship between TRADOC, the National Guard Bureau, and the state could be followed for MUTC, further opening MUTC to the total force.

Additional training facilities across the Army should also be considered. There is an urban training center at Fort A.P. Hill, which could be an additional option but would require expansion to match MUTC’s size and scope. The Fort A.P. Hill urban site possesses requisite barracks, extensive ranges, and excellent urban training space, including subterranean areas; however, TRADOC no longer operates the site after Asymmetric Warfare Group’s disbanding. This leaves MUTC as the most immediately viable solution to establish an Army urban training center.

The Past is Prologue

A US military that has that capability and available training would wield an ability to win the future battles fought in dense urban terrain. As Dr. Margarita Konaev and Dr. Kirstin Brathwaite stated in their analysis of Russia’s current failed urban struggles, “The lesson U.S. policymakers should draw from Russia’s military blunder is not that urban warfare should be avoided. It is that urban warfare is unavoidable.” The lack of a dedicated urban warfare school and training facility reveals that even though urban fighting is decidedly in the US military’s future, we are not doing enough to prepare for it. Whether it be in large-scale combat operations such as the Russo-Ukrainian War, in smaller combat operations like Shusha in the Nagorno-Karabakh conflict, or in counterinsurgency operations like the counter–Islamic State fights in Mosul and Raqqa, urban warfare is a persistent, if not growing, requirement. David Kilcullen made the persuasive case for the evolution of the urban guerrilla, and Russia’s ongoing struggles in Ukraine make a similar case for conventional battle. The US Army needs to train and educate our soldiers to fight in an urban setting.

Michael G. Anderson is an US Army infantry officer with four overseas deployments and a 2022 graduate of the School of Advanced Military Studies. He has published over a dozen articles, including in the Journal of Strategic Security, Journal of Military and Strategic Studies, and Military Review, and is the author of Mustering for War (Army University Press, 2020).