First to Adapt: Why the Joint Force Should Be Closely Watching the Sweeping Overhaul of the Marine Corps 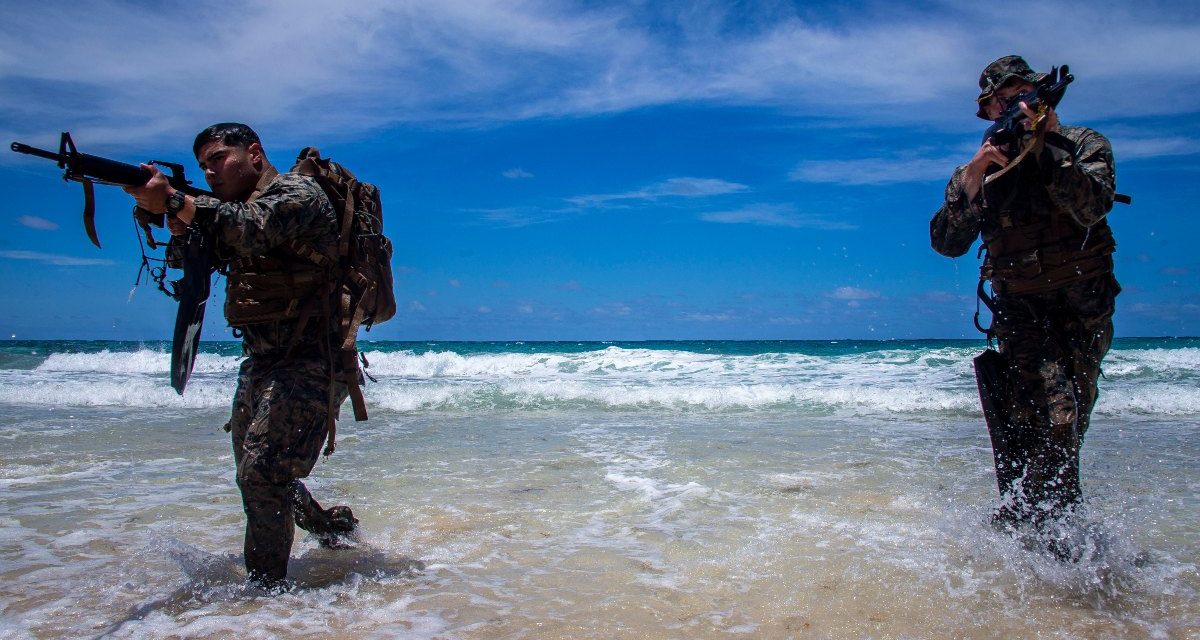 Anyone concerned with the readiness of the United States military took a deep breath as the USS Bonhomme Richard burned last month. The Wasp-class LHD-6, designed to project naval power and deliver Marines to amphibious objectives, is one of eleven in the fleet. Given the lengthy period of repair to the ship ahead—if repairs are even feasible—the implications are significant for a Navy encountering increased demand to compete despite a shortage of personnel, a rapidly changing operating environment, and competition between peer competitors. The Navy will recover, but as efforts to repair this asset commence, it is imperative that the joint force considers what assets and employment concepts really equate to readiness.

A recent series of fait accompli efforts by revisionist powers, namely Russia and China, have stimulated America’s strategists to re-think its current paradigm. Adversaries are adapting so well to America’s conventional military superiority that simply possessing bigger and stronger assets will no longer secure America’s military dominance. America’s current defense strategy recognizes these changes and implores military services to evolve. As the nation’s smallest but most complete service, the United States Marine Corps is enthusiastically adapting. Its sweeping force design efforts have been a met with skepticism by some interested parties. Despite these concerns, with all services facing a need to adapt to new conditions, the Marine Corps’s versatility, cost-effectiveness, and adaptation-biased culture make it the ideal service to act as a first mover and lead the joint force toward a state of readiness for the future wars.

The Impetus for Change

The Marine Corps’s impending force design changes are neither rash nor abrupt; in fact, they are long overdue. As revisionist powers seek to displace America’s dominance, the norms of conflict are changing and adversaries are adopting increasingly granular approaches. Nearly two decades ago, DoD’s Office of Net Assessment published a report concerning the next military-technical revolution. The report predicted that powerful adversaries would use technological advancements to integrate sensors and long-range precision munitions to back steady-state actions short of war. Specifically addressing maritime operations, the report warned that revolutionary powers would use manned and unmanned sensors to create “sea-denial zones” in which naval forces would “have to become smaller and more mobile to survive.” As revisionist powers fulfilled this prophecy, America was stuck fighting wars in the Middle East and South Asia. Now, after decades of operational improvement aimed at fighting against militarily inferior enemies, America is opening its eyes to see China and Russia using its own futurist playbook to compete. American strategy-makers, starting with the commander-in-chief, are hyper-aware that the United States has no time to wait to drive toward change. The National Defense Strategy tasks the joint force to operate under a “global operating model” that contains persistently postured deterrent forces (contact forces), and also fluidly scales if conflict escalates (blunt and surge forces). To develop this operating model, the NDS obligates the military to find efficiencies in business practices, to experiment, and to innovate.

In turn, the National Military Strategy tasks the military to consider changes in force employment, force development, and force design. Aware of the rapidity at which DoD must seek change, Secretary of Defense Mark Esper challenged his J-7 with presenting him with new operational concepts that meet the new strategic threat and technological environment. Correspondingly, DoD is working to establish Multi-Domain Operations as joint doctrine that the services will use to redesign their forces and operational concepts. Through measured initiative and considering broader strategic intent, the Marine Corps is not waiting for doctrine to specifically define its ability to respond to strategy—and this makes sense.

While all services will need to adapt in different ways to best support the National Defense Strategy’s global operating model, the joint force should take advantage of the Marine Corps’s versatility as a benchmark for concept viability and joint integration. In its current operational construct, the Marine Corps fights via a Marine Air-Ground Task Force (MAGTF). The Marine Corps constructs each MAGTF in a mission-specific manner. Organic ground, air, and logistics forces deploy from the service-dedicated amphibious ships owned by the Navy. The Marine Corps owns rocket-supported ground forces, manned and unmanned aircraft, and an organic support structure. The MAGTF’s inherent jointness and the multi-domain mix of capabilities in its existing structure makes the Marine Corps ideal to experiment with the innovations required to adapt to the changing character of war. The Marine Corps can act more rapidly than other services because it can execute much of the necessary experimentation internally. This provides the joint force with an opportunity to use the Marine Corps as a guinea pig of sorts and garner lessons learned as experimentation turns into concept development.

The Marine Corps’s multi-domain characteristics are proving conducive to rapid adaptation efforts. Currently, the Marine Corps is conducting war games, simulations, and exercises to shape the service’s future. Simultaneously, the Corps is diverting some of its ground units from their traditional mission sets to operate and innovate based on the commandant’s guidance. The service has developed its first Marine Littoral Regiment, focused on operating in the Indo-Pacific theatre. This new formation and subordinate Littoral Combat Teams seek to avoid concentration and to operate persistently in dispersed formations driven by operational models that favor mobility and information superiority. These Marines are experimenting with ship-killing missiles and air defense assets that will present their adversaries with a new set of dilemmas. The Marine Corps’s existing multi-domain construct makes these concurrent adaptation actions possible.

As other service chiefs seek ways to adapt their forces to support the nation’s strategy, they can look at the Marine Corps as a test bed. Per the NDS, the Marine Corps will play a role in the contact and blunt layers—during steady-state operations short of war and during initial escalatory phases. While this charge gives the service different tasks than the surge forces described in the same document, these larger forces will still find value in the Marine Corps’s tests. The Corps’s goal of persistent mobilized maritime operations is only attainable if the forces are combat credible. This means that the Marine Corps, with its Navy counterparts, will have to create parity with the same long-range, networked, precision missile systems that concern the overall joint force. Dealing with these advanced sensors and munitions will surely be a part of the joint force’s playbook. Furthermore, every service’s force-employment concepts will need to explore enhanced distribution and mobility for survivability inside sophisticated enemy observation and threat bubbles. As the Army works to analyze how it will reorganize to integrate its Multi-Domain Operations concept, it can look to the Marine Corps as an already-deployed force integrating the latest Joint All Domain Command and Control methodology. Furthermore, the Army’s Multi-Domain Task Force currently experimenting in the Indo-Pacific region will have service-level data provided by the Marine Corps to help frame further concept employment. The myriad after-action reports that come from the commandant-directed war games will serve well for other services to understand concept viability. The Marine Corps’s experience will serve as a basket of lessons learned for the larger DoD.

The Marine Corps’s rapid changes will not only serve as a test bed for the joint force, but also as a mechanism to save money in a resource-constrained time. As the joint force adapts to the NDS-directed global operating model, budgetary winners and losers will emerge. The force will not find every experiment to be feasible and executable in the face of the changing conflict landscape. All of these optimization efforts will be costly—even the unavoidable mistakes will be expensive. The commandant of the Marine Corps acknowledges that his directed changes, like all changes to doctrine and operational concepts, will not be perfect. However, the Marine Corps’s small size—less than a quarter of that of the US Army—is fortuitous in this regard. As it experiments with sweeping changes, errors will be less costly to rectify than those associated with integrating changes among the entire joint force. While the commandant is prepared to use additional funding for modernization, he is posturing to make these moves without additional funding.

To be sure, this is not without cost. The Marine Corps will divest itself of certain capability-specific formations. The service plans to lose multiple cannon artillery batteries in favor of more rocket artillery capacity; relinquish organic armor; decrease conventional infantry, while increasing light armored reconnaissance companies; and eliminate multiple manned aircraft units with an increased in unmanned aerial vehicle squadrons. These shifts are eyebrow-raising to anyone with even a cursory understanding of the Corps’s history. However, these changes are necessary to create a Marine Corps that can compete as a steady-state, combat-credible, deterrent force. Larger services will need to make changes to keep up with the new competition environment. However, a financially prudent approach would be to watch the Marine Corps’s progress to learn what works.

Make no mistake, the Marine Corps would be better equipped to pioneer its new force with an increased budget. After all, the nation does still require the Marine Corps to be capable of resource-intensive joint forcible-entry operations. However, the joint force should exploit the advantages in the service’s willingness to implement these changes with static funding. This is especially true as some of the other services’ experimentation efforts are currently unfunded. While some of the Corps’s efforts will fail, ultimately they will help DoD avoid some of the enormous budgetary blunders it suffered in the past. In the end, the Corps will give the joint force a plethora of lessons learned at no additional cost.

“For a couple hundred years, the Marine Corps has been pretty bold in recognizing that we are not preparing ourselves to fight the last war while looking over our shoulder. We have to make the moves now to be relevant.”

The Marine Corps finds itself in a natural leadership position as the joint force adapts to new strategy. The service is historically proficient at experimenting, recording, and implementing changes based on a driving need. This was the case when a pre–World War II Marine lieutenant helped the service partner with a New Orleans shipbuilder to change the face of amphibious operations. The Marine Corps also displayed this spirit when it pioneered the institutionalization of maneuver warfare as a baseline fighting concept. In the post–World War II era, the Marines also developed much of the helicopter employment doctrine adopted by the joint force. The current contact and blunt layer adaptations are another iteration of the Marine Corps adapting to uncertain situations. In this case, the Marine Corps’s versatility and cost-effectiveness make it the perfect fit for experimentation and joint concept validation.

Brian Raike is an active duty Marine infantry officer. He has served as an infantry platoon commander, company executive officer, company commander, and planner at MARFORCYBER. He has also augmented Officer Candidate School as an instructor for the warfighting section of the curriculum and has deployed to Afghanistan and the Indo-PACOM theatre.