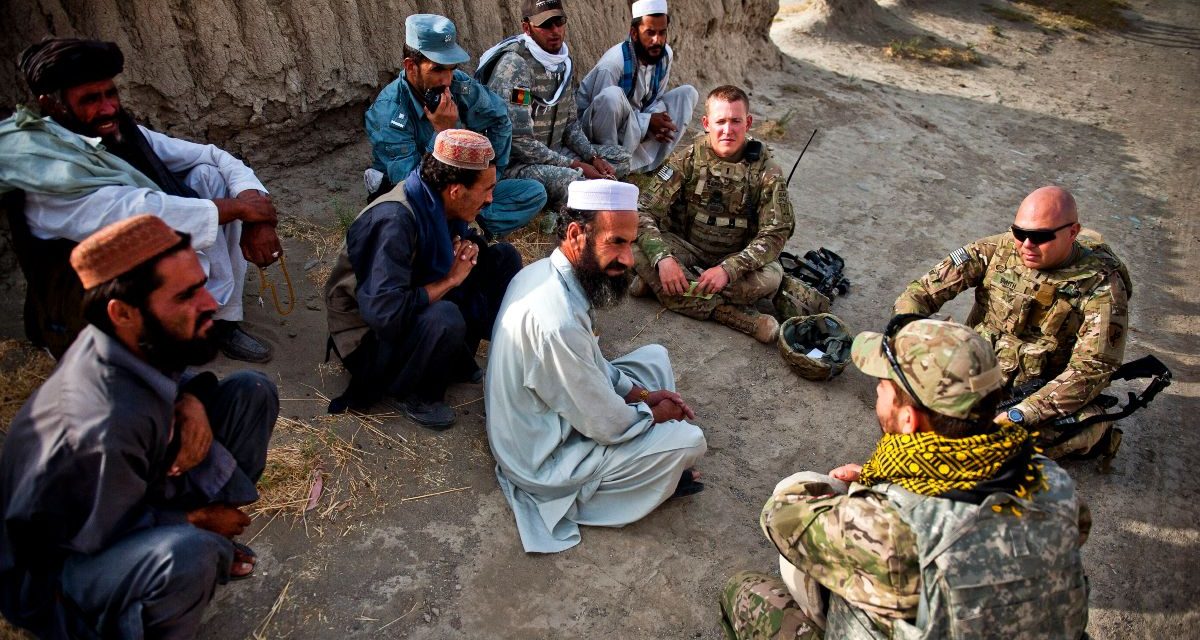 Throughout the nearly two decades of America’s post-9/11 wars, most Americans have been largely oblivious to the bureaucratic plight of and physical dangers faced by Afghan and Iraqi interpreters who apply to the Special Immigrant Visa (SIV) program. The State Department’s SIV program, which was originally created to allow individuals who “provided faithful and valuable service to the United States” to apply for and receive special consideration for immigration, has long been plagued by inefficiencies, under resourcing, indifferent and complacent execution, and unconscionable delays in the processing of applications. The Watson Institute for International and Public Affairs at Brown University recently published a scathing report by Noah Coburn highlighting the lack of progress in addressing the SIV program’s many shortcomings. Reforming the SIV program is an American moral obligation and is vitally important to our national security.

The lack of a coherent, effective strategy to support these workers, and the failure to implement the program as originally envisioned, leaves applicants stranded in Afghanistan or elsewhere and vulnerable to attacks by the Taliban and criminal groups, as well as other forms of exploitation.

A recent executive order by the new Biden administration and a soon-to-air primetime television sitcom from CBS have both raised this serious issue to the national consciousness. In his executive order, President Biden reaffirmed America’s commitment to SIV applicants and directed a full review of the SIV program while demanding recommendations for reform. And despite some recent casting controversy, the television show United States of Al is currently introducing American audiences to the close bonds formed between many servicemembers and their local interpreters in combat and afterward. America owes a debt of gratitude to the SIV applicants and their families, who have and continue to undertake great personal risk to support America’s interests abroad.

Many of these SIV applicants rendered invaluable service to the United States by serving in Iraq and Afghanistan as interpreters for the Defense Department, the State Department, and other government agencies. Over my many years of government service I have both personally and indirectly relied upon these foreign interpreters to accomplish missions essential to the national defense. Countless qualified SIV applications have languished for years before being definitively resolved, oftentimes with no justification for such delays. We have a moral obligation to provide prompt consideration, processing, and approval of deserving applicants.

These are people who not only stood and fought with us—they died with us protecting the United States. Unfortunately, translators are far too often victimized and endangered as a result of their service while waiting for their visas. This legislation ensures visas are available to bring our allies and their families to safety.

The State Department originally established the SIV program to manage those applicants endorsed by the Defense Department in adherence with the National Defense Authorization Act (NDAA) for Fiscal Year 2006. Subsequent NDAAs modified the number of SIV applicants to be admitted each year while also expanding the potential pool of applicants to include a wider range of qualified interpreters. However, the State Department has consistently failed to resource or manage the program effectively, leading to repeated, but ultimately unsuccessful, bipartisan attempts by Congress to reform the SIV program.

This legislation is important to our allies and our code of honor. We made a promise to the men and women who served with us on the battlefield, and we must uphold that promise to leave no one behind.

Critics of the SIV program argue that, by granting asylum to former interpreters, we are “draining” talent from the Iraqi and Afghan populaces. However, the number of applicants able to prove their “faithful and valuable service” to the United States is infinitesimal in relation to the overall size of the populations from which they originate. Moreover, those interpreters seeking these visas are doing so because they face constant danger from the Taliban and other violent groups, meaning that they are hardly able to currently contribute meaningfully to Iraqi and Afghan society. Their primary concern is the survival of their families and themselves. The United States has only issued 26,500 SIVs in the last seven years—hardly a massive drain on talent in either Iraq or Afghanistan. Finally, the visibility that these SIV applicants bring to issues in Iraq and Afghanistan is likely far more impactful than anything they might have achieved remaining in their home countries under the constant fear of death.

Delays in processing applications have had very real and deadly effects, as over three hundred interpreters and their family members were killed since 2014 by terrorists in Afghanistan in retribution for their service to the United States. Another estimate places total deaths for interpreters supporting America’s overseas missions since the start of the post-9/11 wars at over eleven thousand. Even these estimates do not capture the full human toll paid by our Afghan and Iraqi partners and their families. Unlike their American comrades, Afghan and Iraqi interpreters have not rotated back to the safety of the United States between tours, with many staying in a continual state of combat operations for years on end. Our failure to effectively reform and manage the SIV program is a moral failing that should not be allowed to continue.

Reforming the SIV program is imperative to American national security, as the health and success of the program directly supports our ability to recruit next-generation Americans with critical cultural and language skills. It will also affect our ability to hire foreign interpreters to support future overseas operations and ongoing activities. An ineffective and crippled SIV program, such as that which we now possess, undermines our interests and will cost us greatly on the international stage. America is only as reliable as its word and failing to uphold our expressed commitments to Afghan and Iraqi interpreters through the SIV program would generate cascading negative effects.

America has a proud history of recruiting immigrants into our military and diplomatic services to make effective use of their unique capabilities. Irish arrivals recruited right off the docks fought valiantly during the Civil War, Eastern Europeans recruited under the “Lodge Act” were among the first to serve in the newly launched US Army Special Forces shortly after World War II, and the Military Accessions Vital to National Interests (MAVNI) program, begun in 2009, ensured that our armed services recruited the best, brightest, and most patriotic immigrants to great effect. Similarly, the SIV program identifies Afghans and Iraqis who have already “provided faithful and valuable service to the United States,” presenting them and their families as an invaluable recruiting pool for government service. In today’s interconnected world, the reputation of the United States is paramount to its ability to recruit foreign interpreters to support its efforts overseas. The manner in which the United States abandoned its Montagnard and Hmong allies in Vietnam, or the Iraqi Kurds following the 1991 Gulf War, had negative effects on the willingness of other foreign partners to trust America. By failing to honor its commitments to Afghan and Iraqi interpreters, it is likely that we will be unable to find local allies willing to support our shared security objectives in future conflicts.

This is particularly salient given the Biden administration’s focus on foreign relationships and partnerships. The just-released Interim National Security Strategy Guidance states that “when force is required, we will employ it alongside international and local partners wherever possible to bolster effectiveness and legitimacy, share burdens, and invest others in success”. A culturally diverse and linguistically capable American military and diplomatic corps, combined with the ability to readily recruit indigenous interpreters, will prove critical to this approach to security affairs.

Although the Defense Department has not officially kept specific records, it is estimated that interpreters have been responsible for saving thousands of American service members’ lives. Moreover, American military commanders at all levels have admitted that the United States could not have accomplished its missions in either Iraq or Afghanistan without the help and support of indigenous interpreters. Successful reform of the SIV program will buttress America’s credibility abroad and help ensure that it can recruit foreign interpreters willing to support future operations and activities. Otherwise, our national security is significantly imperiled.

The past management of SIV program is a national embarrassment. Afghan and Iraqi interpreters have served bravely right alongside American men and women in intense combat throughout these wars, and the SIV program was supposed to honor and repay them for their sacrifices. Yet execution of the SIV program proved to be very far from the original vision, as under-resourcing, apathy, and immorally long delays further endangered these allies and their families.

After years of ineffectual attempts to reform the program there now is a chance to finally satisfy our responsibilities to our Afghan and Iraqi comrades. The Biden administration’s order to review and recommend changes to the SIV program provides the highest-level emphasis necessary for executive and legislative action. There is every expectation that these recommendations, if enacted, will ensure proper resourcing, oversight, and execution of the SIV program. Most fundamentally, implementing such recommended reforms and improving the SIV program will both fulfill our moral obligations and support our long-term national security interests.

Doug Livermore serves as a civilian in the Office of the Deputy Under Secretary of the Navy while continuing his military service as an officer in the Maryland Army National Guard. Previously, he served for a decade on active duty as an infantry and Special Forces officer. Doug has deployed repeatedly to support combat and contingency operations. He is on the board of directors of No One Left Behind, is the national director for external communications of the Special Forces Association, and is a fellow at the Modern War Institute at West Point.