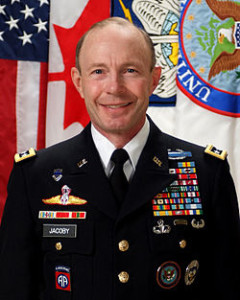 After 37 years of commissioned military service, General Jacoby retired as the Commander of the North American Aerospace Defense Command and United States Northern Command, the first non-aviator to hold that post. He hails from Detroit, MI and was commissioned a second lieutenant upon graduation from the United States Military Academy in 1978. He holds a masters degree in history from the University of Michigan. His military education includes the Infantry Basic and Advanced courses, the Command and General Staff College, the School of Advanced Military Studies, and the National War College. He holds a master’s degree in History from the University of Michigan.