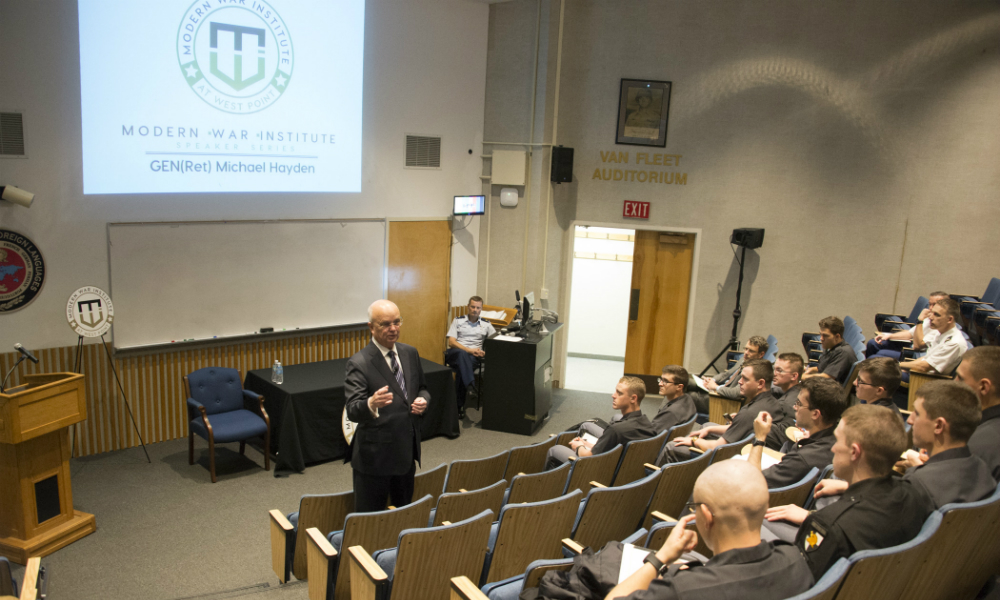 On Friday, October 14th, retired Gen. Michael Hayden chatted with cadets about the vital role espionage and intelligence-collection plays in ensuring America’s robust democracy. As the former director of the Central Intelligence Agency under the Bush administration (2006-2009), Hayden discussed the organizational culture of the CIA, specifically its flattened hierarchy and lack of formality compared to the U.S. military. His subordinates addressed him as “Michael,” not “Sir” or “General Hayden.” Even still, he described it as “the most militarized civilian organization I’ve been a part of.”

Hayden also discussed the controversial practice of targeted killings, arguing in their favor given that they are better able to kill combatants versus non-combatants. He concluded his remarks with a discussion of Russia, specifically its orchestrated hack of the Democratic National Committee. He said the hack was not out of the ordinary and is part of routine espionage. But what Russia did with the information, he said, was different because they weaponized it by releasing the emails via WikiLeaks as a way to interfere in the presidential election. Hayden urged caution in over-reacting to the Russian threat, citing its diminished economic might and decreasing demographics, among other negative indicators. “They are just messing with our heads,” he said, and advised that rather than get in a tit-for-tat cyber war with Russia, Washington should try to wean Western Europe off of Russian gas in retaliation.

General Hayden was at West Point to participate in a panel discussion on The Spymasters: CIA in the Crosshairs. The documentary, whose co-director Jules Naudet was also in attendance, featured candid interviews with all 12 surviving former CIA directors. The focus of the documentary was the post-9/11 hunt for Osama bin Laden, the faulty intelligence on WMD in Iraq, and allegations of torture in “black sites.” Overall, however, as Hayden told cadets in Rob Auditorium, “We did the best we could in the circumstances we were placed with the best information we had.” The panel, moderated by Col. Everett Spain of the Department of Behavioral Sciences & Leadership, focused on the storytelling aspects of intelligence gathering as well as telling the story of ex-CIA directors.