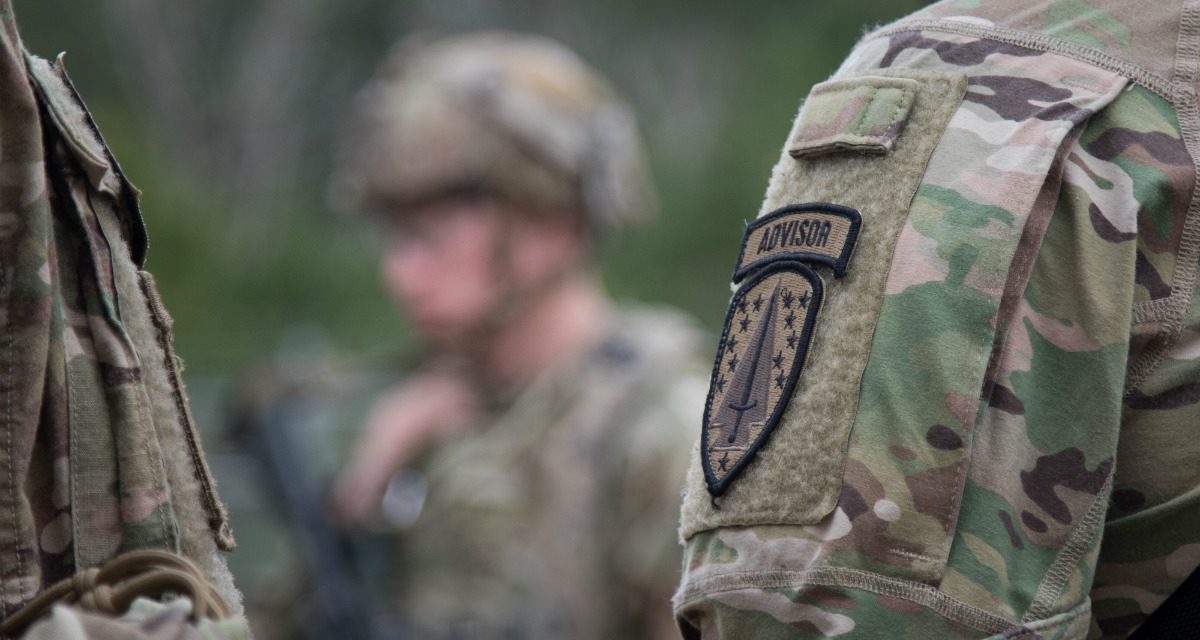 The US Army has an advising problem. As we approach the eighteen-year anniversary of the attacks that triggered our post-9/11 wars, the partners we train often still struggle with the basics of military operations while we commit ever increasing resources to assist them. We’ve been through a virtual alphabet soup of different approaches—Military Training Teams (MTTs), Advise and Assist Brigades (AABs), and now Security Force Assistance Brigades (SFAB) have all been committed to make our partnered forces better. Furthermore, outside of Iraq and Afghanistan, we have advisors in dozens of countries ranging from Saudi Arabia to Colombia. Our soldiers have done heroic work and can point to limited local successes with pride. While tactical advising (the training of partner units at brigade and below) has been the main effort in our quest to strengthen our partners, we can safely say after so many years, it is also the least efficient and effective. Unfortunately, the Army is doubling down on this approach through its creation of SFABs, which promise to consume large amounts of personnel and huge amounts of experience, for the sole purpose of tactical advising. Moreover, the SFAB is not even designed appropriately to effectively do its job with lasting effect. The Army must get better at advising or risk damage to the reputation for excellence it enjoys throughout the world.

Before attempting to fix advising, it is instructive to look at what it is supposed to accomplish. Field Manual 3-22, Army Support to Security Cooperation states that “the ultimate goal of security force assistance is to create foreign security forces (FSF) that are competent, capable, committed, and confident and that have a security apparatus that supports US policy related to achieving regional stability.” The manual then provides a table breaking down each of these four characteristics—competence, capability, commitment, and confidence. But the most interesting part is the description of partners that should be competent “across all levels from ministerial to the individual soldier or police officer.” Therefore, by our own doctrine, we should be focusing across our partner’s entire defense capacity, not just its tactical formations.

Unfortunately, anyone with even a passing knowledge of Army advising over the past nearly two decades knows that tactical advising consumes the lion’s share of the manpower and resources. As a case in point, in the US Army’s training mission to the Saudi Arabian National Guard in 2017–2018, where I served as an advisor, the number of ground advisors committed to brigade and below formations was substantially higher than the amount of officers and noncommissioned officers devoted to Saudi schooling and institutional efforts. The new SFABs seem intent on continuing this trend, with a heavy emphasis on combat-arms officers and NCOs, and training heavily focused on tactical formations.

With such a heavy focus upon tactical advising, we must ask if it actually works. After over a decade spent training the Iraqi security forces, the United States watched in dismay as entire units fell apart, almost without a fight, in 2014 against ISIS. Even before that point, Iraqi forces struggled with everything from small-unit tactics to theater sustainment. Bear in mind that this was an army whose recent forebears managed to fight Iran to a standstill and successfully invaded Kuwait with corps-sized formations. Judging by these standards, American tactical advising seems to have caused regression, not improvement. Of course, there are multiple other factors at work, but the salient point remains that despite the best efforts of thousands of American advisers over a decade, the Iraqi Army struggled against a group of forces fighting from pickup trucks. While Iraq might be a particularly egregious example, it holds in line with our experiences in Afghanistan.

Tactical advising can be worthwhile in building small formations, as well as creating goodwill with host nations. However, Special Forces generally do better at these tasks—after all, it is in their mission-essential task lists and the teams have the language and cultural training to be more effective. Furthermore, there is not the expectation that SF operational detachments will fundamentally transform a military, but rather, that they can simply help around the edges. Therefore, we might ask if the commitment of significant amounts of talent and personnel is worth the return on investment. Moreover, in the process of trying to help our partners, we often retard their progress, because highly motivated Americans will work around and through any problem their partners encounter to ensure mission success. While these traits are important and save lives, they do not help our partners grow.

Shifting from the purely technical aspect of advising, tactical or otherwise, the ability to succeed in this mission is predicated upon the advisor’s ability to build relationships. We are often asking our partners to spend money and potentially lives based on our recommendations. Thus, they must be able to trust us. Unfortunately, our current programs do not allow for us to do much more than build transitory relationships that are then promptly discarded at the end of an American adviser’s tour. In fact, our rotations often hinder relationship building as our partners often see us simply as the newest American, soon to be replaced by the next one. Compounding this issue, the Army does not have any mechanism to track important relationships and take advantage of them at appropriate times. With the SFABs in particular, the population of officers and NCOs used to form the new units’ leadership components ensures that many of these individuals in whom we have invested substantial resources to train in advising likely won’t come back to that duty for several years, if ever. Simply put, our career management timelines in the non-SF community will not support extended time away from convention career paths for these individuals.

With these challenges firmly in mind, the Army should look at revising its current focus on advising. The mission is still incredibly important. Without building partner capacity, we will have to invest more combat power ourselves, leaving the Army incapable of responding to threats in other parts of the globe. However, we should ask how we can best build that capacity within the constraints under which we are currently operating. We must systematize our approach and take a long view, perhaps even sacrificing short-terms wins for long-term gains.

The Army should invest much more heavily in the institutional building of our partners. We are doing some of this already, but it is not the primary focus of our efforts, almost always taking a back seat to tactical advising. Building the institutional training system is the true forty-year mission, and one that will actually build capacity. It will look different in every country and region, but the general thrust should be the same—the greatest strength of our force is our professional military education, warts and all, and we must convince our allies that this is the product that they really want in order to make their militaries successful.

In order to accomplish this task, the Army might even need to relook how it recruits and assigns advisers. The optimized basic model might be similar to the way in which foreign area officers are selected and managed, or perhaps simply a major expansion of this already highly successful program. Instead of a singular assignment, being accepted into an SFAB would mean a career-field shift, along with commensurate language and cultural training and skills-based pay bonuses. Advisers would spend one to two years taking immersion language classes and cultural training. Then they would deploy, accompanied by their families, to forward SFAB headquarters in-region for an assignment of three to five years working in the institutional training branches of partner militaries in non-combat roles. This would necessarily be a smaller force than the SFAB, but it would more than likely have a higher chance of effecting real change in our partners.

For those partner forces requiring more kinetic assistance (e.g., Iraq and Afghanistan), the SFAB could have small fires liaison teams that would serve as a conduit to American joint fires and intelligence, surveillance, and reconnaissance. The highly successful combined operations during the Battle of Mosul in 2017 should serve as the model in this case. Our partners can figure out how they will fight the tactical fight themselves. It might not be our way, but they will be stronger for working through their own problems. Moreover, as our experiences during our post-9/11 wars have shown, our massive efforts at tactical training have limited results. Therefore, American liaisons can provide the partnered forces with the capacity to put American fires onto enemy targets. Furthermore, these liaisons can coordinate with any American or NATO forces directly from a host-nation tactical operations center. The SFABs are leaning in this direction by deploying with joint tactical air controllers (JTACs) and forward observers, but they should make these individuals the main effort in a kinetic environment, not a continued effort to tactical training. Finally, this model should affect the type and quantities of individuals required for the mission—it will necessitate the deployment of more fires officers and NCOs as well as JTACs, rather than infantry and armor field-grade officers.

These recommendations are merely the beginnings of what could serve as a fundamental shift in how the Army conducts advising. Acknowledging that our current career timeline does not help us in this mission is a first step. As things stand now, officers are too tied to increasingly rigid timelines and career paths in order to compete for promotion or to simply stay in the army. While the idea of a twenty-year captain would not be popular, surely there is a way to encourage some officers to take a non-standard career path and achieve professional success without compromising their specialties. Congress is looking at letting the military adjust the law that governs personnel management. Perhaps we should take them up on it.

In sum, while we can point to limited successes throughout the past several decades, the Army can do better. However, in order to do so, it should move its focus from tactical advising to institutional training. Currently we are expending large amounts of effort and manpower to achieve limited tactical goals. In fact, our current methodology often gets in the way of longer-term gains. By shifting now, we could work within the manning realities of our force, actually strengthen partner capacity, and make a substantial contribution to national defense. 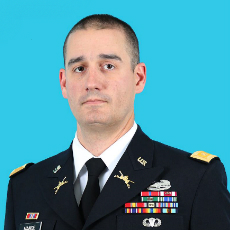 Lt. Col. William (Bill) Nance, PhD is an armor officer currently serving in the history department of the Command and General Staff College. He served two tours in Iraq and one tour in Saudi Arabia as a Brigade Advisor to the Saudi Arabian National Guard.

The views expressed are those of the author and do not reflect the official position of the United States Military Academy, Command and General Staff College, Department of the Army, or Department of Defense.