Getting Defensive: Observations from the National Training Center 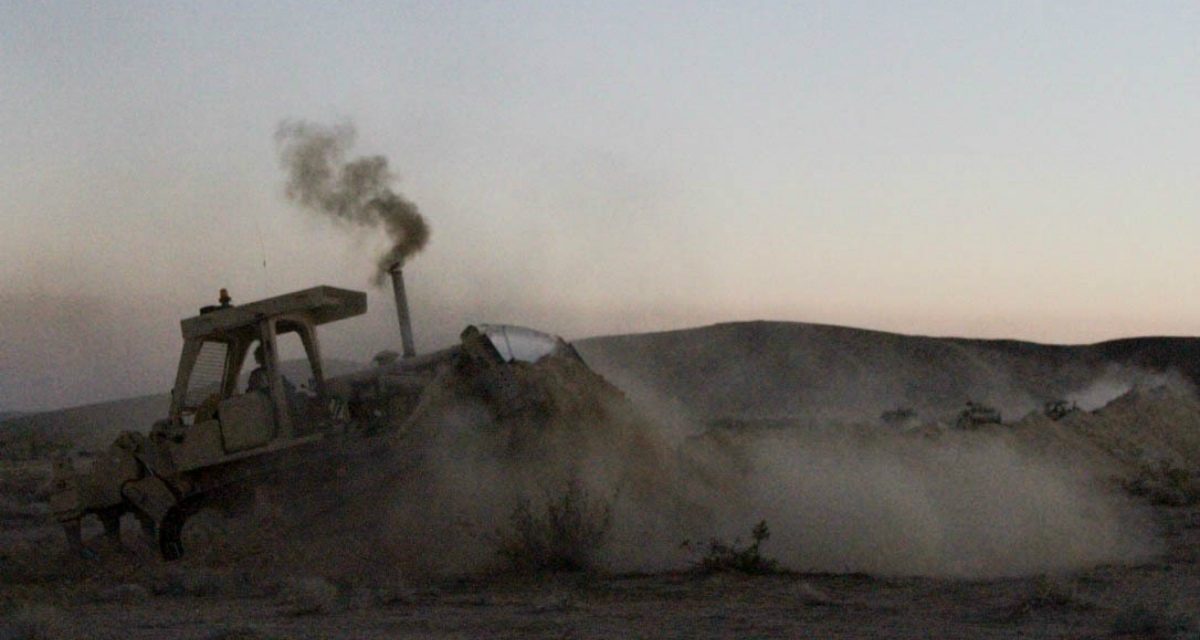 Legendary football coach Bear Bryant maintained that “offense sells tickets, but defense wins championships.” As an Army, we love pithy quotations like these—we put them in our signature blocks and emblazon them on unit t-shirts. But Bryant’s words have a particular relevance. They are a clarion call for pursuing success by doing the unglamorous things—like defensive operations, which can win the time and space that could mean the difference between victory and defeat on the battlefield.

But according to an argument made recently by Capt. Harrison Morgan, the Army places too heavy an emphasis on the offense, to the detriment of planning and training for the defense. As the assistant brigade engineer trainer for Bronco Team at the National Training Center (NTC) at Ft. Irwin, California, I’ve seen much that supports Capt. Harrison’s point. That’s unfortunate, because at NTC the defense is probably the best opportunity a rotational unit will have to inflict an outsized level of damage on the opposition force. Over the last seven rotations I’ve been in this position I have not yet seen a brigade fully capitalize on this opportunity in the force-on-force portion of the rotation. Why is this? And what is the remedy?

Is the Army’s emphasis on the offense intrinsic to human nature, or is it related to something distinct in the nature of American warfighting culture? Both. The offense is an intellectually more satisfying operation to plan and execute than the defense. Our flawed understanding of risk and statistics means we gravitate towards concepts with a defined payoff while ignoring defensive measures necessary to mitigate the risk of something terrible, but unlikely. And even in hindsight, when defensive measures work, it’s very hard for us to appreciate the process that kept a disaster from happening. The offense is a discretely defined operation with a defined payoff. The defense is open-ended, has many harder-to-define variables, and often zero easily discernible payoff. The reward for emplacing a successful defense is often empty, as it influences enemy decisions to attack somewhere else or not at all. For these reasons the defense is, fundamentally, a less satisfying concept for the human brain to wrestle with than the offense.

The defense, I believe, also carries a negative connotation in American warfighting culture. We believe that if we’re defending then something has gone wrong. As Capt. Harrison points out, many of the US Army’s worst predicaments were the result of poorly executed defense. And rather than draw the conclusion that we need to defend better, we seem to have associated the defense itself with failure, while avoiding the hard lessons. Many members of the Army have experienced this, as I have: while stationed in Germany, my unit conducted a leader professional development exercise at the D-Day landing site, and while stationed in Korea, we conducted one at the site of the Inchon landing. I don’t recall visiting or studying a major defensive operation in any unit-led LPDs, and I’m an engineer! Going a step further, is there a single defensive operation in US military history that is viewed generally in a positive light? To be sure, attempting to define the entirety of US warfighting culture by identifying the operations the Army holds in highest esteem carries some risk of oversimplification. But I would argue that these operations are almost solely offensive: the Normandy landings, Iwo Jima, the Rough Riders’ charge at San Juan Hill, the Inchon landing, the bayonet charge at Little Round Top, the Battle of Trenton, the First Gulf War, even the westward expansion of our young nation across the continent. And what are the most well known defensive operations?  Tet (a US victory which was seen as a defeat in public opinion), the Battle of the Bulge, the Alamo, COP Keating, Chosin Reservoir, Pearl Harbor. The defense has an image problem.

Since the defense is less satisfying to plan and more challenging to execute, and because we associate defense with failure, we then design training for our officers in Army schools focused on offensive operations. Then, in the stress of the decisive-action scenario at NTC, where commanders and staff are sleep-deprived, hungry, too hot or too cold, and desperately trying to salvage the time that is quickly slipping through their fingers, they fall back onto what they know and what they’ve trained for—the offense. At NTC, I’ve seen brigades struggle with the offense, in particular the tenets of breaching. However, their proficiency is generally at a higher level than it is for the defense. Once the brigade has seized what is often a huge amount of terrain, though, the leaders are left with the problem of how to hold all of this ground. Often this is in excess of thirty kilometers of frontage—a huge amount of terrain for a brigade to successfully defend at NTC.

Capt. Harrison argues that the Army should conduct a defensive training exercise for a full armored brigade combat team (ABCT) at the White Sands Training Area in New Mexico against the 1st Armored Division in order to fully explore the 1:3 force ratio that doctrine prescribes for the defense. While this is a novel idea and would be a great training opportunity, we already have ten brigades per year at NTC that go through several full-scale brigade defensive “reps” against a smaller opposition force. And typically, from what I’ve seen, the brigades here struggle to emplace a successful defense against even this smaller force. At our current level of proficiency, a scenario in which an ABCT defends against an entire division would likely not be a productive use of time or money. For it to be useful—and to improve our defensive capabilities generally—we would need to address the following concerns first:

Blade Team Utilization. A typical brigade at NTC will be augmented with 10–14 bulldozers, giving them five to seven blade teams. These dozers should have blades in the ground emplacing survivability positions behind the FLOT (forward line of own troops) and then transition to emplacement of anti-vehicle ditches immediately upon culmination of the offense. In the time-constrained scenarios at NTC the rotational unit cannot afford to have dozers sitting around unemployed—which is a common phenomenon. Most brigades I’ve seen underutilize their blade assets.

Project Management Approach. A good defense is really a construction project built under severe time constraints. Due to an all-too-common lack of accurate reporting, however, many brigade command posts struggle to maintain an accurate understanding of the defensive project. The brigade commander must be able to know when the overall project is 25, 50, and 75 percent complete in order to flex assets for prioritized engagement areas. Most brigades are not maintaining an accurate and timely reporting channel for obstacle emplacement to allow the commander and staff to build an accurate picture. This is likely due to a combination of training shortfalls and the often confusing nature of the command–support relationships and reporting requirements for engineers at the company level.

Training. Typically brigades will conduct offensive breach training prior to arriving at NTC with their organic engineers, but usually no full-scale brigade defensive training. It is harder to train a full-scale defense at home station for several reasons: First, the engineers that augment the BCT at NTC are typically from the reserve component, and it is difficult to incorporate them into training prior to arriving at NTC. Second, the brigade engineer battalion does not have enough engineer dig assets to fully support a brigade defense exercise. And third, defensive training doesn’t scale. A brigade-sized defense with three separate battalion engagement areas is significantly more complex than a single battalion engagement area. For example, the support requirements for class IV construction materials, boundary management, and engagement area prioritization become increasingly complex in a way that is hard to replicate at the smaller scale.

Standards. Due to a lack of training on the defense, both in maneuver units and in the Engineer Regiment, many of our operators and junior noncommissioned officers come to NTC with a shortfall in understanding of the standards for defensive obstacles.

Doctrine. While most maneuver battalion commanders have a good understanding of the tactical meaning of terms like “fix,” “disrupt,” “turn,” and “block,” there is less understanding across the Army of these terms’ specific meaning in relation to linear obstacle effort per engagement area. For example, in an engagement area with a two-kilometer avenue of approach width, doctrine states that a block effect, with a resource factor of 2.4, requires a minimum of 4.8 kilometers of linear obstacle effort within that avenue of approach. Doctrine also says that brigades dictate the intent of an engagement area and let battalions decide where to place the obstacles within the brigade-defined obstacle belt. This approach at NTC often results in failure due to our inexact understanding of the above-mentioned doctrinal obstacle requirements.

Equipment. The Engineer Regiment suffers from maintenance concerns on key pieces of older countermobility equipment, such as the Volcano mine-laying system. When brigades arrive at NTC, some of them discover unpleasant readiness truths about their Volcanos, which, prior to coming to NTC, had been reported as fully mission capable. In order to accurately assess the Volcano’s maintenance status, units should run it through a complete rehearsal prior to arrival. Complicating this issue, though, is the fact that the Volcano typically is owned by the maneuver augmentation company, which usually is not organic to the training brigade and may not be even stationed on the same post.

Capt. Morgan’s call to “make defensive operations great again” is an important one. But unfortunately, there are no shortcuts. Fixing some of these issues will require hard work—and even a different approach to both our institutional understanding of military history as well as our intellectual approach to tactical risk. Furthermore, at the brigade level, we face the significant challenges to skillfully executing defensive operations described above. That said, all is not lost. Of the seven rotational brigades I’ve worked with at NTC, at least two significantly improved their defensive operations over the course of the rotation and emplaced what I assessed was a very high quality defense in the live-fire portion of the exercise. We are making progress—I’ve seen it here at NTC—and I’m hopeful that this discussion of what I’ve seen will benefit other Army leaders, as they prepare both for decisive-action rotations at NTC and more generally for future conflicts that will not be kind to any force incapable of effective defensive operations.

Capt. Jared Hirschkorn is an active duty Army engineer officer. He commissioned from Officer Candidate School in July 2009. He served as a Route Clearance Platoon Leader in Afghanistan in 2010-11, and commanded the 523rd Engineer Support Company in Hawaii in 2016-17.  He now serves as the ABE trainer on Bronco Team (Brigade Staff Trainers) at the National Training Center, Ft. Irwin, CA.