Going All in on the Great Game? The Curious and Problematic Choice of Kiplingesque Inspiration in US Military Doctrine 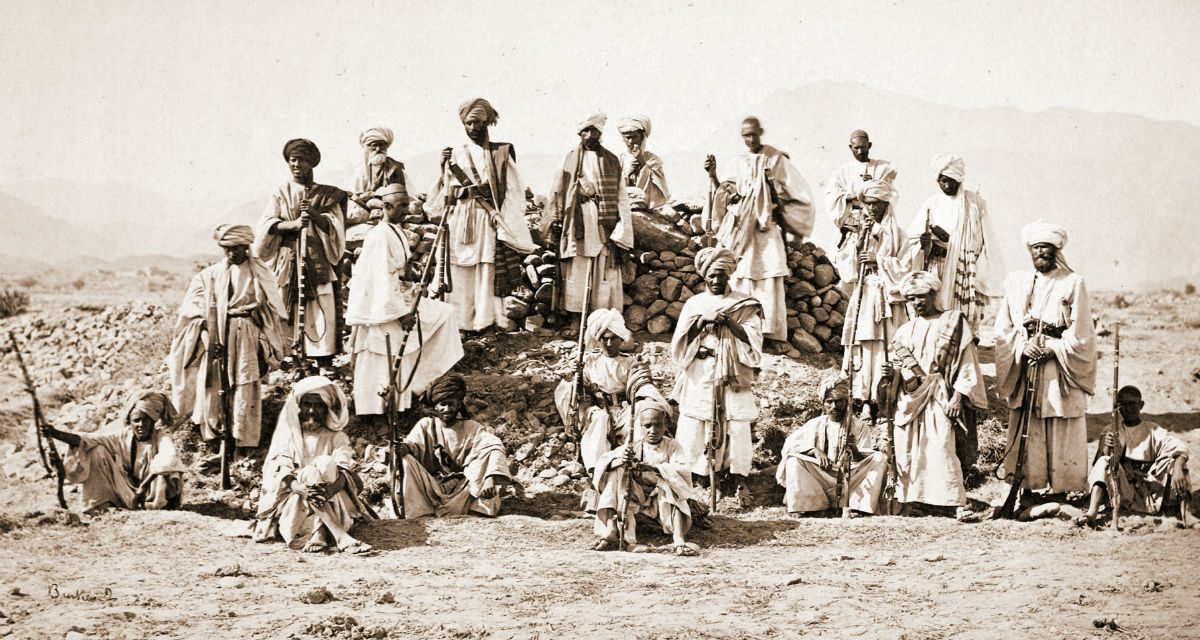 Eleven years ago, Tatiana Gfoeller, then US ambassador to Kyrgyzstan, found herself at brunch with several UK Foreign Office officials, major British investors, and a Canadian mine owner. Gfoeller’s counterpart from Her Majesty’s Government had invited her to brief the Duke of York, Prince Andrew—serving at the time as Britain’s special representative for international trade and investment—on Kyrgyz political corruption and Western investment prospects, but the meeting soon took an unexpected turn. “The United Kingdom, Western Europe (and by extension you Americans too),” Prince Andrew remarked, were now “back in the thick of playing the Great Game . . . and this time we aim to win.” Gfoeller, a reasonable career diplomat who occasionally taught Georgetown courses, judiciously distanced the American position from Prince Andrew’s imperial nostalgia.

This could be written off as a sort of stereotypical public-school Englishman’s antiquated worldview, in the same category as other occasional instances of framing geopolitics by channeling Kipling. Boris Johnson, for example, recently caused a minor scandal when he quoted lines from “Mandalay” on a visit to Myanmar. Nor is the Duke of York immune to the Kiplingesque, referencing the spy-versus-spy intrigues and imperial rivalries that Kipling popularized as “the Great Game” in his “boy’s adventure” novel, Kim. There are less apt lenses, I suppose, for the absurd contradictions of the post–Cold War world, its “forever wars,” “competition below armed conflict,” the “gray zone” and other policy-circle commonplaces. Even so, I suspect that the Ambassador Gfoeller of eleven years past would be quite surprised to see Prince Andrew vindicated by the inclusion of the Great Game as an explicit analogue for future American strategic competition in Joint Doctrine Note 1-19, Competition Continuum.

It is worth noting that JDN 1-19’s explanation of the Game is brief and irresponsibly reductive. For the most part, its explanatory-note box plagiarizes three introductory paragraphs from the Wikipedia entry for “The Great Game,” attributing the information to “various sources.” There is no real engagement with the more nuanced historiographical information presented on the rest of the Wikipedia page, much less the scholarly sources it relies on. But most significantly, one important sentence is omitted from the plagiarized introduction: “The 1901 novel Kim by Rudyard Kipling made the term popular and introduced the new implication of great power rivalry.” This might seem like a pedantic point, but the problem is threefold. First, the implication that nineteenth-century Britons used the “Great Game” as a descriptive model for great-power rivalries before Kipling establishes a false equivalence between real nineteenth-century strategic discussions and our own notion of a “competition continuum.” Second, it masks the real equivalence in JDN 1-19’s comparison, namely the one between the current strategic thinking on competition and competition as imagined and depicted in a Victorian novel. Third, it gives a Victorian novelist’s understanding of great-power rivalries the weight of predictive historical analogue.

As someone who has spent significant time with both fictions and state documents from the “Great Game” period of the British Empire, I want to make a point about JDN 1-19’s comparison. In one important sense, the “Great Game” is, quite simply, a fiction. At no point in the nineteenth century did the British Empire ever use it as an overarching strategic framework for understanding its competition in Central Asia. When Arthur Conolly, the East India Company political agent usually credited with coining the term, first mentioned his “grand game,” he did so in the limited context of humanitarian efforts on the Northwest Frontier. And although variations of the term “Great Game” appear throughout the nineteenth century, they refer to radically divergent situations such as affairs on the European continent or speculative proposals to align with Czarist Russia against emergent American power. The common denominator is not a common strategic model; it is simply the broad comparison that can be made between gambling and all manner of political affairs. Anything beyond this involves ascribing strategic policies to the British Empire that simply did not occur to Whitehall.

British historian Malcolm Yapp makes this point at length, rightly noting that the “legend of the Great Game” emerged as a distinct historiographical lens after the Second World War. This does not mean that historians who describe trajectories of British Imperial statecraft in terms of “the Great Game” are wrong. In fact, I would go further than most. I would argue that “the Game” is a useful descriptive framework for a range of Imperial policies as far back as the Seven Years’ War. But I also have no reluctance in admitting that this historiographical lens comes from Kim, a Victorian adventure tale that has no more claim on historical verisimilitude than King Solomon’s Mines, The Four Feathers, or similar stories by Kipling and his peers.

Fiction is valuable—perhaps embarrassingly so—to historians, military elites, and policymakers; it lets them ask “what if?” It counterbalances deterministic assumptions about historical-political “givens.” Jean Larteguy’s cult novel, The Centurions, for example—a political potboiler celebrating French paratroopers during the Battle of Algiers—appears in the annotated bibliography for Field Manual 3-24 Counterinsurgency as part of the “foundation [of books] that leaders can use to assess counterinsurgency situations and make appropriate decisions.” Similarly, the phrase “anger of the legions,” taken from the novel’s epigraph (a supposed second-century letter credited to one “Marcus Flavianus, Centurion in the 2nd Cohort of the Augusta Legion”), has been used in numerous contexts to caution about the civil-military divide. That the letter was likely the invention of a French propagandist in the 1950s does not diminish its use as a framework for describing real-world situations such as the Obama administration’s “runaway generals.” Indeed, it is perhaps the use of fiction to explore strategic politics that ties Americans to nineteenth-century Britons, rather than the use of a specific fictional construct like the Great Game. Decades before he, as prime minister, advanced the coronation of Queen Victoria as “Empress of India,” for example, the Tory politician Benjamin Disraeli speculated that the “Queen of the English [should] . . . transfer the seat of her empire from London to Delhi” in his literary romance, Tancred; or, the New Crusade (1847). But one thing distinguishes Disraeli or Jean Pouget (Larteguy’s source for the “Flavianus” letter) from JDN 1-19’s “Great Game” note contributor: they were highly conscious of the degree to which we inherit the connotations and original contexts—all the “baggage”—of the fictions we use to make sense of the present and future.

It goes without saying that Great Game analogies imaginatively position America as the British Empire. No one seriously imagines that we are “playing” as anyone else—Czarist Russia, Qing China, Qajar Persia. We do not have to address how discomforting this might be—as we might when we realize that we are likely closer to Star Wars’ Empire than its Rebel Alliance—because by not acknowledging that we’re looking through a fictional frame, we accept the role we’re cast in by the fiction uncritically. Kipling’s “Great Game” is part of a totalizing vision of history, one that depicts strategic rivalries as geopolitical expressions of deeper deterministic cycles. Kim, for example, presents its hero with the choice of achieving enlightenment or remaining “bound to the Wheel of Things.” In another tale, Kipling’s narrator marks time by reflecting that “the wheel of the world swings through the same phases again and again.” Not surprisingly, Kipling’s fictions tend to repudiate the possibility of end-states, dialectical progress, political liberalization, and the inevitability of transitions to democracy. This is why, in the “Kiplingverse,” the “telephone-bell is ringing madly, and Kings are being killed on the Continent, and Empires are saying, ‘You’re another,’ and [Prime Minister] Mr. Gladstone is calling down brimstone upon the British Dominions,” while the newspaper “copy-boys are whining … like tired bees, and most of the paper is as blank as Mordred’s shield.” It does not matter if you play the Game as “nation” or “empire,” or if you choose to play the Game at all. The Game plays you because there is nothing else, no variance in potential historical outcomes. Thus, one can play at empire as a nation, or play at nation while being an empire, because it is all the same.

I remain fascinated by the notable editorial decision in the JDN 1-19 authors’ use of Wikipedia, namely the omission of Kipling’s imagination as source. Perhaps the whole business about make-believe adventure stories seemed tangential to the seriousness of the “competition continuum.” But by obscuring the problem of fiction as lens and “imperialist legend,” they have ironically staged a situation that asks us to imagine strategic rivalries as though we are characters within Kipling’s fictional universe, not critical planners in the real world who may or may not find Kipling’s make-believe stories useful. If we are such characters, then Kim tells us that, in practical terms, there is no way to actually “win” the strategic competitions of the Great Game; the end of playing is simply to make sure that no one else “wins.” This is the central ethos of Conolly’s “grand game” when taken out of context, as the “legend of the Great Game” does. It is an idea that one of Kipling’s spies, Hurree Chunder Mookherjee, draws to its logical conclusion, informing the novel’s hero that “when everyone is dead the Great Game is finished. Not before.”

Taking a step back from imagining ourselves as Kipling characters highlights the problem of critical framing—the whole choice of aligning our strategic competitions with the British Empire’s. The historian Eric Hobsbawm discusses this kind of deliberate “attempt to establish continuity with a suitable historical past” as the “invention of tradition,” an imaginative, ideological leap that advances “a set of practices . . . of a ritual or symbolic nature, which seek to inculcate certain values and norms of behavior by repetition, which automatically implies continuity with the past.” Like post–World War II England, which found the Great Game’s “legend” so illustrative, the British strategic “player” depicted by Kipling was characterized by a distinct dissociation of sensibilities—that of an exhausted, atrophying empire that sees itself as a progressive-minded nation. We might ask if that is what we wish to see ourselves as in terms of a “tradition,” as well as if that is what we are irrespective of what we imagine. Either, I suppose, is a way of being “back in the thick of playing.”

Matthew Carey Salyer is an Associate Professor at West Point. The views expressed are those of the author and do not reflect the official position of the United States Military Academy, Department of the Army, or Department of Defense.