Hearts Not Minds: Morale and Inspiration in Insurgency and Territorial Defense 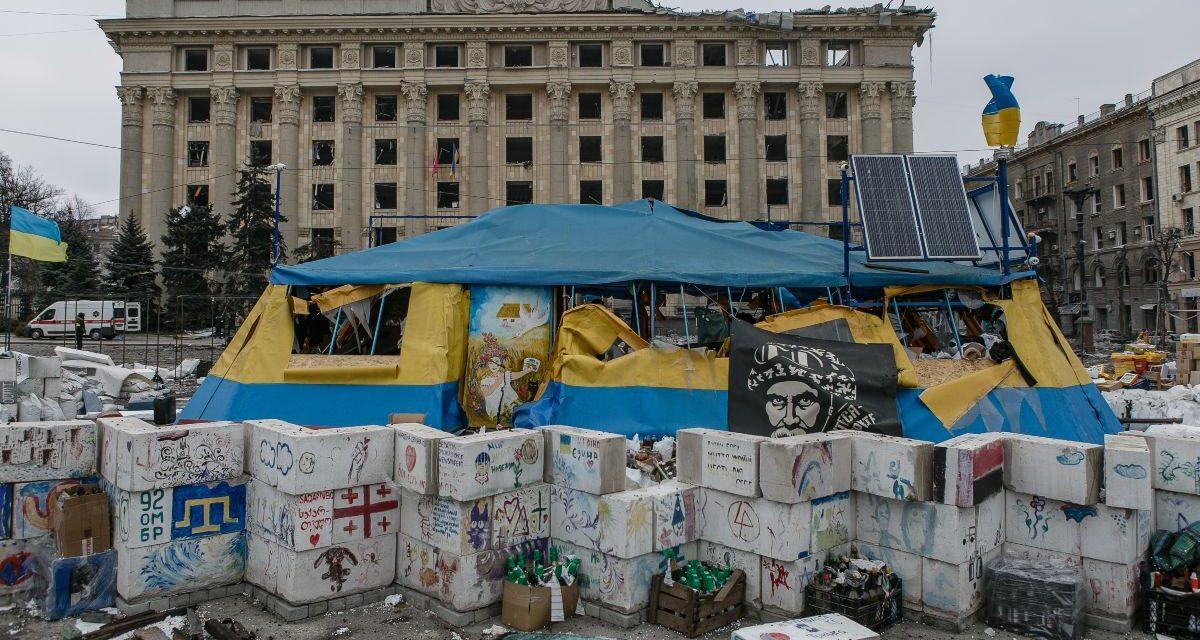 Kharkiv, a largely Russian-speaking city of over one million people, is known for poetry and the arts. But over the past few weeks, as the northeastern Ukrainian city has faced the brunt of the Russian invasion, it has become one of many proud symbols of Ukrainian resistance. Facing a barrage of Russian airstrikes, artillery, armor, and infantry, the city has held its ground, with the Ukrainian military joined by everyday citizens to protect the city from invaders from the north and east.

In war, morale always matters. The US military knows this better than most. In July 1965, Secretary of Defense Robert McNamara requested additional deployments of US ground forces in Vietnam to “destroying” the morale of the Democratic Republic of Vietnam and the Viet Cong, including through the use of “informational actions.” While McNamara accurately predicted the impact of the information environment on the morale of insurgents and counterinsurgents alike, he overlooked how these deployments would affect the morale of US soldiers in Vietnam and the US public at home. Despite suffering hundreds of thousands of casualties, the North Vietnamese and Viet Cong forces held out, capturing Saigon a decade after McNamara’s request for additional forces. The relative willpower of US forces compared to that of the Viet Cong insurgents was one of many reasons for this outcome.

Morale would similarly play a central role in US struggles in Afghanistan and Iraq. Although patriotic sentiment was widespread after the 9/11 attacks, US morale waned over time, beaten down by improvised explosive devices, sniper attacks, and the knowledge that blood and sweat shed in conflicts in the Middle East and south Asia were yielding few strategic results. As one Taliban fighter is said to have declared, “You have the watches. We have the time.” Both insurgent and counterinsurgent in Iraq and Afghanistan were well aware of one of the golden rules of guerrilla warfare, once neatly summarized in the Vietnam context by Henry Kissinger: “The guerrilla wins if he does not lose. The conventional army loses if it does not win.”

In these historical conflicts, the belligerent that successfully prioritized morale won. A wide-ranging RAND Corporation report supports this conclusion, noting that “failure of will has signaled the ending of almost every military conflict in world history.” Morale, then, should be considered a critical factor as the Ukrainian crisis progresses. Predicting the outcome of this bloody conflict is a difficult task, but one possible outcome is a protracted insurgency, with Russian occupiers facing a fierce Ukrainian resistance. The fate of such an insurgency would be determined by many factors, including Russia’s counterinsurgency strategy, the intervention of outside powers, and the morale of both sides. On the latter point, in particular, Ukraine appears to hold a decisive advantage.

Morale in the Russia-Ukraine War

Morale has been an essential factor in the territorial defense of Ukraine. President Volodymyr Zelenskyy’s leadership has played a central role in keeping Ukrainian morale high; he has repeatedly rebuffed Russian disinformation through public appearances around Kyiv and refused offers of Western exfiltration, at one point declaring, “I need ammunition, not a ride.” The media has regaled Western publics with accounts of heroism—such as the story of the troops at Snake Island who were killed (although that later proved untrue) after defying a Russian warship with the proclamation “Russian warship, go fuck yourself”—as well as stories of plucky Ukrainian soldiers outwitting their far more powerful Russian counterparts, such as at Kharkiv, where Ukrainian ambushes repeatedly stalled a Russian advance. Civil society, meanwhile, has also stepped up, with one journalist summarizing the atmosphere as “not a climate of fear or pessimism. Rather, there was a clear strength forged by community action. A single purpose to which everyone had subscribed—victory. And in that common cause all individual anxieties seemed to fade.”

But morale will likely play an even more important role in the now-unraveling next phase, particularly if Russia ultimately succeeds in occupying parts of eastern Ukraine. Insurgency and guerrilla warfare are notoriously difficult to prosecute, and are sapping to energy and spirit—guerrillas will face food and supply shortages, adverse weather, and relentless manhunts. But the Ukrainian resistance will receive sustained financial and political support, including from an international diaspora movement. These are also excellent conditions for insurgency; in the words of former US Under Secretary of Defense for Intelligence Michael Vickers, “Ukraine has all the conditions going for it” to wage an insurgent campaign. And Russia’s reaction—to escalate bombings against civilian infrastructure in an “effort to break Ukrainian morale”—has only fed Ukrainian anger and patriotism. As Ben Connable notes in a study of the will to fight on both sides, Ukrainian morale may stay strong: “Given the existential nature of the Russian invasion and the demonstrated power of Ukrainian national identity, there is a good chance that the Ukrainians can sustain much of their will to fight through the invasion and into a long-term insurgency.”

Russian morale, meanwhile, appears to be flagging. The Defense Department has observed “indications” that Russian forces are suffering from low morale, which could be one factor frustrating the Russian advance up to this point. There are reports of Russian desertions and sabotage of their own weaponry; many of Russia’s frontline soldiers were not even told they were going to war. Assassination attempts targeting Zelenskyy have allegedly been foiled by Russia’s own intelligence agencies. And while Ukrainians have been galvanized into the streets by images of their battered, unshaven president defying an invading enemy, Russians have taken to the streets to protest the war.

Morale will grow increasingly important as the conflict drags on—and increasingly hard for Russia to sustain, as Russian soldiers continue to realize there will not be a quick return home, as their comrades head back in body bags, and as Russia’s bombing campaign intensifies the resistance and global support for Ukraine.

Asymmetric wars are not just asymmetric in capability but also in stakes: the lesser force often faces an existential threat, and therefore summons a spirit that an invading army simply cannot match. Ukraine, as a nation seeing its right to self-determination in mortal danger, will always maintain that advantage against Moscow. But policymakers must also consider whether morale can be maintained, constructed, or cajoled.

Morale’s importance offers the West an opportunity to push the war in Ukraine’s favor. The information environment, and its intersection with cyber operations, could already be shaping morale in the ongoing conflict. So far, Russia’s use of cyber operations in its invasion of Ukraine has been limited. Despite the discovery of destructive malware targeting organizations in Ukraine in January and February, predictions that Russia would use highly destructive cyberattacks to aid in its military operations have not come true. Rather than causing serious damage to Ukrainian critical infrastructure, cyber operations may leave a very different impact on the conflict: curbing the morale of Russian invaders. In the early days of the invasion, a Ukrainian newspaper published the personal information of 120,000 Russian troops, which was possibly obtained through cyber operations. Analysts quickly pointed out how the exposure of this data could leave Russian soldiers vulnerable to targeted anti-Russian messaging, further eroding the morale of the invading forces. The leak came only days after the hacktivist group Anonymous declared “cyber war” on Russia, subsequently conducted denial-of-service attacks against Russian government and state media websites, and posted data allegedly belonging to the Russian Ministry of Economic Development on Twitter.

Anonymous and other groups’ hacktivism fits into the narrative that the heroic, less capable Ukrainian forces are locked in a noble struggle against the more powerful Russian aggressors. Information operations, possibly enabled by cyber operations, can further promote such narratives, complicating Russia’s counterinsurgency efforts.

As the United States weighs how to support Ukraine, it should recognize that the US military has already created multiple units capable of integrating and projecting military power across the information environment and the cyber domain. Should an insurgency emerge, the United States should deploy this capability to help maintain the conflict’s narrative in favor of Ukraine. Highlighting Russian atrocities, using cyber operations to expose the identities of those who target innocent civilians, and spreading messages about the heroism of the Ukrainian people are just a few options to bolster Ukrainian morale while curbing that of the Russian invaders. US military and covert operations to promote such narratives should be accompanied by complementary diplomatic messaging, as well as domestic political messaging from US leaders, to sustain the American public and private sectors’ support for pressuring Russia. Given Western unity in countering Russia up to this point, it is likely that US allies and partners will echo these messages.

Understanding the history of morale’s role in insurgencies is essential for analyzing the ongoing war in Ukraine and developing sound policy options for what could be a drawn-out conflict. But one thing seems clear: Russia will struggle to win its war in Ukraine if its troops do not want to be there.

Jacob Ware is the research associate for counterterrorism at the Council on Foreign Relations and an adjunct professor at Georgetown University’s Edmund A. Walsh School of Foreign Service.