How Not to Build a State 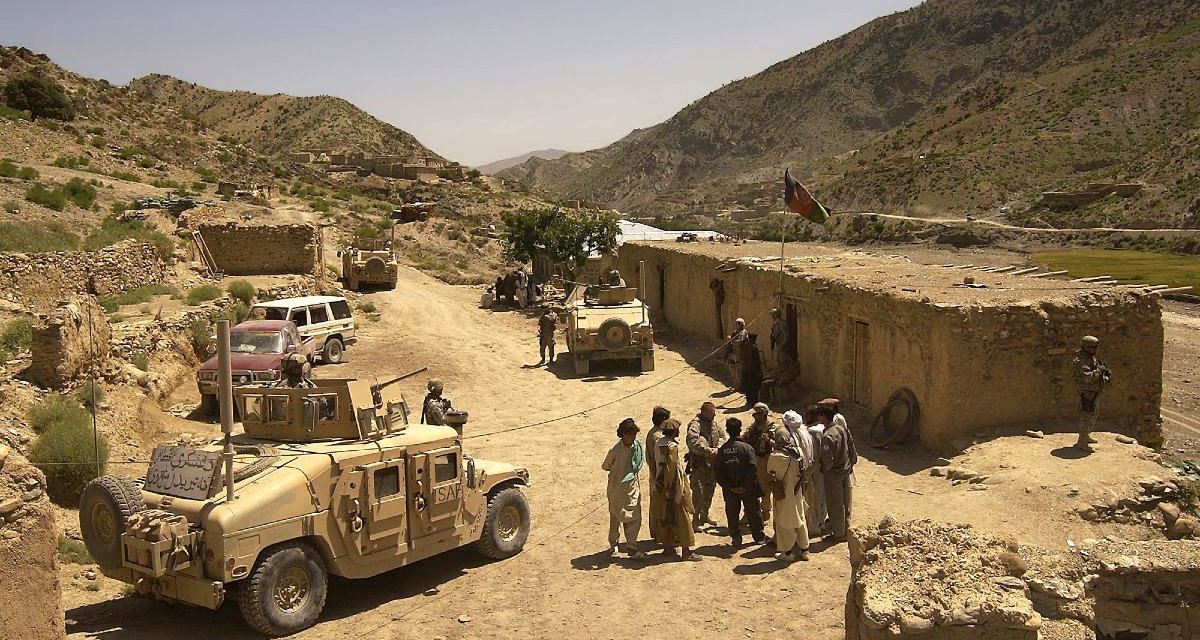 In the fall of 2001, just over a month after the first US troops arrived in the country, the United States and its allies seized control of Afghanistan, driving the Taliban from Kabul and out of power. Twenty years later saw the stunning reversal of the events of 2001: after a summer offensive that netted the Taliban territorial gains across the country, they captured Kabul on August 15, 2021. One minute before midnight on August 30, the last American troops departed Kabul’s Hamid Karzai International Airport on a C-17 cargo plane. After two decades of fighting that killed 2,461 US troops and more than one hundred thousand Afghans, and that cost American taxpayers some $824 billion, the longest war in American history had formally ended.

How did it go so wrong? Contrary to some accounts, the US intervention in Afghanistan was not doomed to failure. Rather, the fundamental mistake was to allow the intervention to transform from a narrowly defined counterterrorism mission to an expansive, ill-defined liberal state-building mission.

Twenty years of failed state building and an unhelpful detour in Iraq make it easy to forget that the United States had limited goals in the fall of 2001: kill Osama bin Laden, destroy al-Qaeda, and punish the Taliban for permitting al-Qaeda to base itself on Afghan territory. Even after bin Laden eluded the US military and its allies, escaping across the border into Pakistan, the United States could have stuck to the mission. Instead, it pivoted to a much broader goal: it sought to make Afghanistan inhospitable to terrorism in the future.

Underlying this expansive goal was an explanation for how a terrorist organization came to thrive in Afghanistan and a theory for how to prevent other terrorist groups from doing the same. The problem, as the Bush administration saw it, was that Afghanistan’s weakness, corruption, and lack of freedom made it an attractive site for terrorists. If state weakness and a lack of democracy were the problems, then state strengthening and democratization were the solution.

To describe the turn from counterterrorism to state building and democratization as an egregious example of mission creep is to downplay the ambition and scale of what the United States and its allies hoped to achieve in Afghanistan. The Afghan state they envisioned would be secure, peaceful, effective, democratic, classically liberal in its market and political orientation, impartial, rule bound, and respectful of human rights (including those of women and minorities).

If that sounds like a lot, it is. In various forms, and to various degrees, this template has been part of the liberal international state-building model since the end of the Cold War. Its track record has been poor.

Why was remaking Afghanistan in the Western image so challenging? The answer is not a lack of resources: the US government alone spent more than $145 billion to rebuild Afghanistan. Nor is the answer the misperception that the Afghan people were not ready for effective government or democratic institutions. Civil society structures and organizations, often considered to be foundational for good governance, have long existed in Afghanistan. Moreover, customary forms of governance, such as collective decision-making bodies (shuras or jirgas) and community and religious leaders (maliks and mullahs, respectively), actually strengthen state governance in Afghanistan. They enhance perceptions of the state, improve support for democratic values, and even serve as a defense against regime abuses.

The answer lies in the mission itself. Domestic state development involves two related processes: the management of violence and the construction and strengthening of state institutions. Historically, both processes have been highly coercive, corrupt, and exclusionary.

In Afghanistan, multiple actors not only wield violence but advance claims to the rightfulness and legitimacy of that use. These actors include the powerful individuals known colloquially as “warlords” or “strongmen,” such as Atta Muhammad Noor and Abdul Rashid Dostum, as well as the Taliban itself. Convincing armed actors to lay down their weapons and acknowledge the authority of the national government is not easy. President Hamid Karzai brought Atta and Dostum into his government, but he never disarmed them. In fact, Atta, Dostum, and other strongmen with independent sources of coercive power for years played a pivotal role in holding the Taliban at bay.

The second process, building and strengthening state institutions, sounds comparatively easy on its face. But building institutions does not mean simply establishing a new constitution or creating new ministries and commissions. Rather, it often requires altering the basic rules governing a society’s political order. Those rules determine who can access state power and how that power is to be organized and exercised. Put simply, they determine the most basic considerations in politics: who gets what, where, when, and how. These questions are deeply, even violently, contested. Formal institutions are irrelevant when powerful actors do not accept the same ground rules for playing the political game.

The major players in Afghanistan had profoundly different ideas about what those rules should be. The United States, its allies, and the internationalized elite in Afghanistan thought that political order should be participatory, open, and impartial, and they tried to structure state institutions in accordance with those principles. The Taliban espoused a radically conservative alternative, one that Westerners considered fundamentally antithetical to the liberal state-building project. The warlords who profited handsomely but illicitly from the government’s dependence on them were also opposed to institutional changes that would have jeopardized their privileged access to the rents of power.

The broader point is that the structure of state institutions and the exercise of state power are inherently political. Restructuring those institutions—changing the rules of the political game—is therefore also political. Moreover, that restructuring necessarily has distributional consequences—there are winners and losers. Those who lose their privileged access to the spoils of state power (or the selective nonenforcement of that power) will resist that restructuring, sometimes even violently. The international state-building mission in Afghanistan was never a technical or military challenge that could be solved with more money, more training, and more kinetic operations. It was—as state building always is—deeply political.

This expansive state-building mission, with its twin components of controlling violence and restructuring the state along formally legal and liberal democratic lines, was already an overly ambitious and challenging endeavor. But the United States also made matters worse for itself along the way.

First, the United States insisted on unrealistic timelines. The Afghanistan intervention attempted to engineer in years what took today’s effective and consolidated states centuries to achieve. Britain, France, and the United States curbed the worst of their patrimonial tendencies, reformed their bureaucracies, stabilized and secured their territories, and liberalized and democratized, but in no case did they do so in twenty years. To think that outsiders could somehow achieve something similar in Afghanistan, from a less favorable starting point, and in the face of persistent short-termism on Washington’s part, is more than misguided. It is staggeringly arrogant.

Second, the United States entered Afghanistan without knowing how to engineer the outcomes it sought to achieve. There was no clear template or playbook. In fact, the United States has never succeeded in the wholesale transformation of a state and society. The two clearest postwar success stories are Germany and Japan, cases that differ profoundly from Afghanistan and from all other state-building interventions since then. Germany and Japan already had powerful, effective state structures. Afghanistan had no comparable foundation. In part because of this history of effective statehood, Germany and Japan were also culturally homogeneous with strong national identities. Afghan identity is pluralistic, and considerable societal fragmentation complicated the external attempt to build a legitimate centralized state. Furthermore, Germany and Japan were defeated countries. The United States drove the Taliban from power, but it did not defeat them.

Third, moral hazard— the bad incentives created when people believe they will be protected from the consequences of their decisions—exacerbated these problems. As long as the United States characterized Afghanistan as vital to its national security interests, the Afghan government knew that the United States was unlikely to walk away. Indeed, even after President Joe Biden announced that the United States would withdraw all troops from Afghanistan, some US politicians, military leaders, and academics immediately cited renewed difficulties in the fight against terrorism as a potential consequence of the American departure—leaving open the glimmer of hope that the United States might reverse itself.

Yet for twenty years, this unwillingness to leave fostered the Afghan government’s dependence on the United States and its military. As a result, the Afghan government was never incentivized to stand up an effective professional military, rein in excessive corruption, improve public service delivery, or improve life for ordinary Afghans. It knew the United States would come to the rescue. Until Biden’s announcement, this calculation was not wrong; the full consequences of that dependence only became clear on August 15 when Kabul fell to the Taliban.

External state building may not be impossible. But the lesson of Afghanistan is that democracies find it extremely difficult. The experience of the last two decades should warn us of the dangers of American hubris and the limits of American military power to transform states and societies. The pivot from counterterrorism to liberal state building set the stage for failure, and subsequent decisions and a lack of preparation made the mission even harder than it had to be. Unfortunately, the challenges inherent in the mission, the problem of moral hazard, and the political exigencies responsible for short-termism are unlikely to change. If the richest, most militarily powerful country in the world was unable to succeed in remaking another country in its image, perhaps the most vital lesson of Afghanistan is that the United States should be much more circumspect about whether it should try at all.

Melissa M. Lee is Assistant Professor of Politics and International Affairs at Princeton University. She is the author of Crippling Leviathan: How Foreign Subversion Weakens the State (Cornell University Press, 2020).