How the National Guard Can Help Counter Chinese Influence 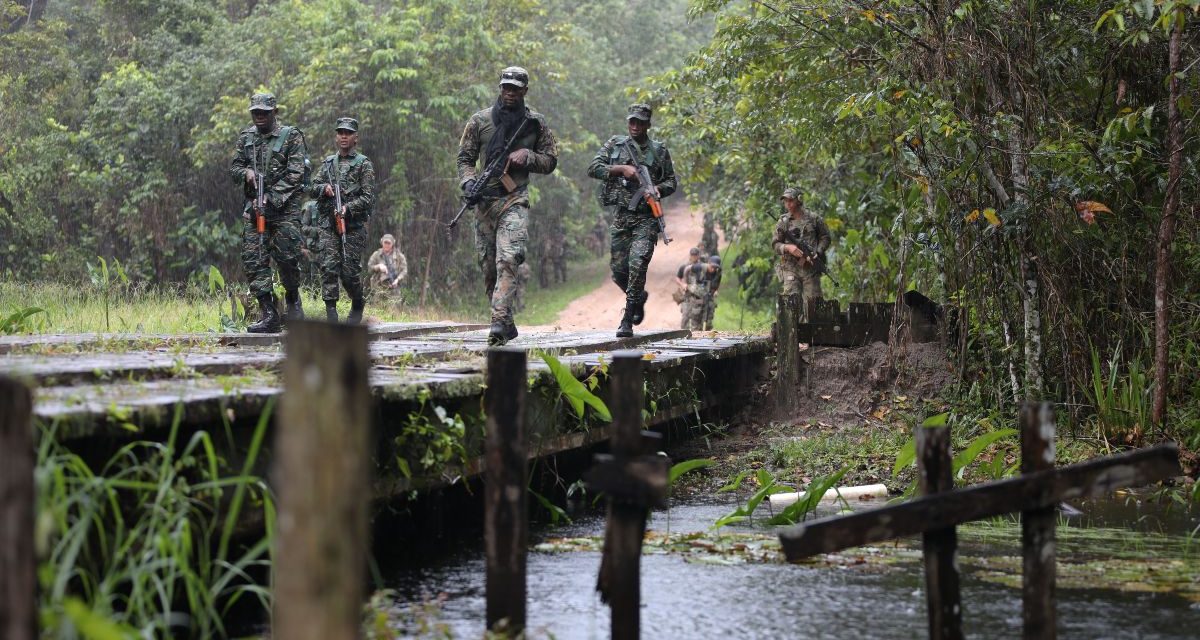 In 2004, Hurricane Ivan inflicted widespread physical devastation across the Caribbean. In the storm’s aftermath, China quietly began to establish a foothold in the region, making offers that some countries could not refuse. These offers involved sums of money that may have been inconsequential for the Chinese government but were game changers for struggling Caribbean communities. More importantly, this practice began to tip the political scales in China’s favor, as Caribbean nations slowly began to make political concessions to Beijing.

Now that the US military is shifting away from two decades of conflict in the Middle East, US policymakers and military leaders are searching for ways to effectively compete with China in an era of renewed great power competition. To compete effectively, the United States needs a program to achieve strategic impact that is also nimble, flexible, and capable of global reach.

Fortunately, there already exists a scalable and tailored program within the National Guard that can make an immediate impact in the competition arena: the State Partnership Program (SPP). The SPP is a tried-and-true program that can bolster US influence around the world through expanded military-to-military partnerships. While it is in need of rebranding from its post–Cold War roots, the SPP has the potential to act as an irregular warfare tool capable of countering China’s influence in the Caribbean and worldwide.

China’s global influence manifests in many forms, but the most prevalent appears to be its economic influence. Through programs like the Belt and Road Initiative (BRI), China has woven itself into the fabric of local infrastructure initiatives in small countries around the world. This is true in the Caribbean, as well, with significant investments by China in countries such as Jamaica, the Bahamas, and Guyana. And China is starting to see the strategic payoff, as countries such as Grenada are induced to sever political and economic ties with Taiwan.

This manifestation of Chinese influence has not gone unnoticed by US policymakers. The 2018 National Defense Strategy (NDS) identifies that China employs this form of predatory economics, while the NDS Irregular Warfare Annex provides a framework for understanding these tactics as part of China’s attempts to achieve legitimacy with and influence over local populations. As the NDS calls for a “rapidly innovating Joint Force” to counter Chinese efforts and restore a favorable balance of power, US policymakers must ask what current authorities can enable the changes necessary to successfully compete in a game of influence with America’s primary strategic competitor.

Enter the SPP. The SPP originally focused on assisting countries emerging from behind the Iron Curtain following the end of the Cold War. Although it started with former Soviet bloc countries, it subsequently expanded to ninety-three nations across the world. The program seeks to support the security cooperation objectives of the United States and the geographic combatant commands by developing enduring relationships with partner countries and carrying out activities to build capacity, improve interoperability, and enhance US access and influence while increasing the ability of both US and partner forces to address emerging challenges.

For example, under existing US authorities and approved partnerships, the Puerto Rico National Guard could be in the Dominican Republic tomorrow countering China’s presence there through security cooperation activities. Similarly, the District of Columbia National Guard could deploy to Jamaica to counter Chinese influence in that Caribbean nation, and there is the potential to do more in the region. That is because of the roughly fifteen independent countries in the Caribbean, only eight have individualized SPP agreements. An additional problem is that only six states and two territories cover the entire region—with Florida overtasked in covering eight different nations (in addition to Guyana, the Florida National Guard is responsible—along with that of the US Virgin Islands—for the relationship with the seven-nation, eastern Caribbean bloc known as the Regional Security System). To achieve the aims of the NDS, the United States must reinforce and scale up programs capable of identifying gaps in US presence and extending US influence. The SPP is a program designed to do just that.

The SPP encompasses cooperation activities authorized by federal law, supported by funds appropriated to the Department of Defense for such purposes, occurring between a US state or territory’s National Guard personnel and a partner nation. The governing federal law, 10 US Code § 341, allows state and territory National Guard units to partner with foreign security forces or governmental organizations whose primary functions include disaster or emergency response. Such partnerships can operate across a wide range of activities and with remarkable longevity, as illustrated by the ongoing partnership between the Louisiana National Guard and the Belize Defence Force. Louisiana’s current adjutant general, Brigadier General D. Keith Waddell, has cultivated this relationship, which he helped establish over two decades ago while building schools in Belize as a young engineer. Earlier this year, the District of Columbia National Guard hosted a visit by senior military leaders from Burkina Faso to increase collaboration on “mutual security goals.” And as a pandemic swept the globe, the Alabama National Guard received a delegation of civilian and military medical specialists and chemical, biological, radiological, and nuclear personnel from Romania to discuss COVID-19 response best practices.

Once rebranded, the program could expand still further, helping to build personal relationships and increase US influence throughout the Caribbean—but policy roadblocks remain.

What are the Hurdles to Rebranding SPP for Speed and Effectiveness?

The Department of Defense policy governing the program, DoD Instruction 5111.20 (October 2016), assigns oversight authority to the under secretary of defense for policy, with administration by the National Guard Bureau, troop sourcing by state and territory National Guards, and execution by geographic combatant commands. This crowded field of stakeholders, along with a lack of a comprehensive oversight framework for key objectives and metrics, poses critical challenges to program effectiveness, as a US Government Accountability Office report found in 2012. Moreover, existing Defense Department guidance provides little latitude for states to exercise initiative—the only entities able to recommend new SPP partnerships are geographic combatant commands, which are required by federal policy to submit annual lists of any proposed new state partnerships from their respective areas of responsibility to the office of the chairman of the Joint Chiefs of Staff.

This policy structure is out of step with the rapid pace of strategic competition. Greater decentralization could unleash initiative by the states as they seek to strengthen existing partnerships and forge new ones. Thus, the key problem is that the current legal authorities and governing policies have the National Guard units hamstrung in showing initiative in the program. As an O-4 judge advocate in Alabama, there are several hurdles for me to even be involved in the traditional post–Cold War engagements with our Romanian partners—as I have seen with numerous requests to participate. Showing initiative by staffing a request for an individualized partnership with Barbados or requesting to work within an existing partnership with a country that is a BRI participant would be nearly impossible to achieve bureaucratically.

Enabling Initiative to Jump Start Influence in the Caribbean

Just as China exploited opportunities to increase its influence in the United States’ backyard in 2004, the National Guard must also seize the opportunities at hand by making better use of the SPP as a strategic tool in great power competition. Now is the time for US national security leadership to reexamine existing policy in the face of near-peer threats, and one useful step would involve expediting the SPP decision-making process. The National Guard has a unique opportunity to accelerate change in the irregular warfare competition arena and requires only relatively minor changes to SPP authorities to do so.

The under secretary of defense for policy should first reorganize command and control of the program, assigning greater authority to state National Guard leadership. This would allow SPP program recommendations to flow directly from state National Guard units in the field to the Joint Staff, in coordination with the geographic combatant commands, for more rapid approval. This revision will streamline the program’s current command-and-control structure, eliminating the stakeholder coordination issues highlighted by the Government Accountability Office. Delegating greater authority to state National Guard leadership would allow state Guard personnel to better match capabilities within their own units with new or existing partner nations.

While the SPP may not be widely known, its potential strategic impact is significant. The National Guard has the capacity, but not enough authority, to exercise initiative through the SPP. National Guard leaders should thus be given greater latitude to accomplish more with the program. The straightforward changes discussed above will enable the National Guard to wield a powerful strategic tool capable of reestablishing US influence in the Caribbean and worldwide.

Clay Fuller is an experienced federal, military, and local prosecutor in Appalachia. He was an active duty Air Force officer from 2010 to 2014, and currently serves in the Alabama Air National Guard. From 2018 to 2019 he was a White House Fellow assigned to the assistant secretary of defense for special operations and low-intensity conflict.