Humanitarian War Is an Oxymoron, so Why Do We Keep Doing It? 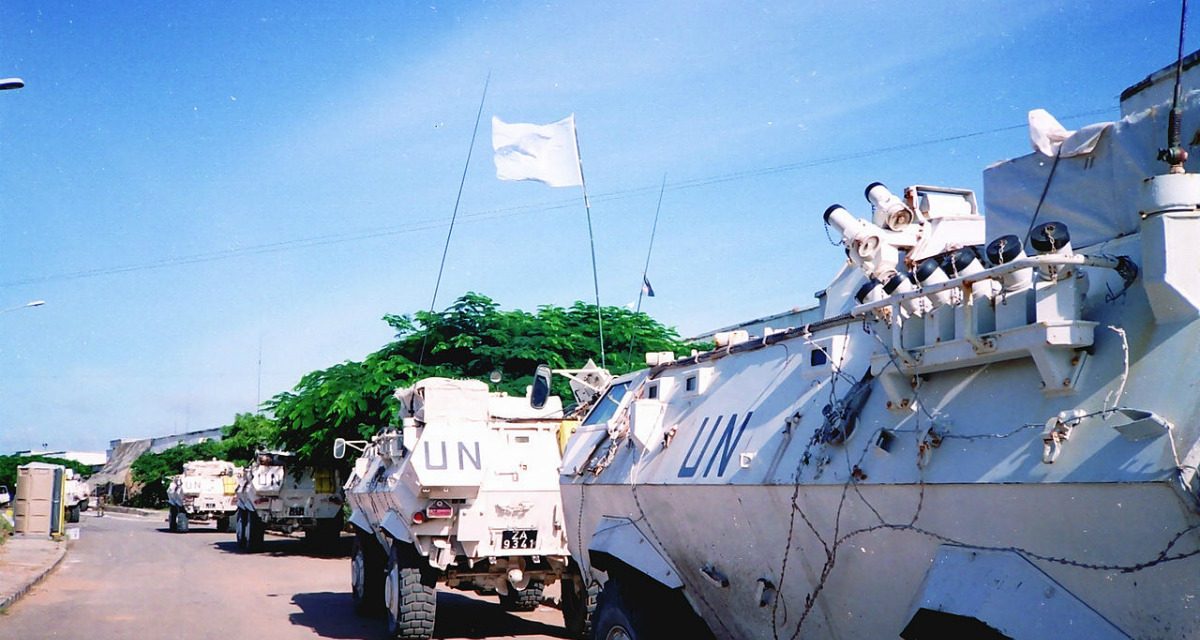 In order to show the contradictory nature of the term humanitarian war, the definition of humanitarian intervention and its genesis must be established. Humanitarian Intervention is broadly defined as “the threat or use of force . . . for the sole purpose of preventing or putting a halt to a serious violation of human rights.” Article 2(4) of the United Nations Charter states, “All Members shall refrain in their international relations from the threat or use of force against the territorial integrity or political independence of any state, or in any manner inconsistent with the Purposes of the United Nations.” This article limits the influence of another sovereign state acting on self-interested purposes, but it leaves room for the purposes of the distribution of aid, medical treatment, and restoration of infrastructure critical for human life by the international community through the UN and other nongovernmental or intergovernmental organizations. Additionally, under Articles 39 and 41–42 of the UN Charter, the Security Council is provided the latitude to call upon other members to conduct necessary operations in another sovereign state. At its core, humanitarian intervention’s intent is built around the concepts of humanitarianism and just war. Alex Bellamy aptly describes the legitimacy of humanitarian intervention based on Augustine’s argument between just and unjust war, noting that war must be waged with proper intent. He writes, “The central difference between a just and unjust war is that a just war attempts to both restore peace and repair an injury received.” Additionally, humanitarian intervention is based upon the centrality and protection of human rights. Hedley Bull noted in 1984 that “it is clear that the growing legal moral recognition of human rights on a world-wide scale . . . has one of its consequences that many forms of involvement by one state or society in the affairs of another, which at one time would have been regarded as illegitimate interference, will be treated as justifiable.” It is just as important for the intervening entity, such as the UN, to be conscious of human rights of the citizens within the sovereign state. Humanitarian intervention is only effective if human rights are protected on both sides.

The Problem of Humanitarian War: From Somalia to the Balkans to Libya

In 1992, as a civil and political situation on the ground deteriorated in Somalia the Security Council passed six resolutions, all focusing on humanitarian assistance. In April 1992 the UN established and deployed UN Operation in Somalia with the primary effort of distributing humanitarian aid. However, towards the autumn of the same year the Security Council realized the influence of multiple nonstate actors including private armies, mercenaries and warlords in Somalia was adversely affecting the amount of aid that was provided to the civil populace. The Somali government was nonexistent at this point and the Security Council became desperate for immediate solutions. It is within this context that the Security Council passed Resolution 794 and authorized military action without the invitation of the host government. The United Task Force began operations on December 9, 1992. Eventually, a force of approximately 37,000 military personnel with combat equipment deployed to Somalia with the focus of providing human security rather than humanitarian aid and the prevention of human rights violations. Humanitarian war had gradually replaced humanitarian intervention. Was the UN, the intervener, still concerned with the intent of the conflict? Was the intent still that of humanitarianism? It should be noted that the international community countered the threats in Somalia the same way they would fight a war, just as sanctioned under R2P. Humanitarian war had been authorized; however, the UN had a responsibility to resume the peacekeeping mission once the threats against human security had been countered.

Humanitarian intervention slowly evolved into humanitarian war beginning in the autumn of 1998 after the repeated petitions of the UN for the Milosevic government of the Federal Republic of Yugoslavia to cease the persecution and genocide of ethnic Albanians in the then-Serbian province of Kosovo. The UN Security Council voiced serious concerns of human rights violations in Resolution 1160 and then again prompted the Milosevic government to comply with ceasing its process of ethnic cleansing in Resolution 1199. On March 23, 1999 just prior to the launch of airstrikes in Kosovo, NATO Secretary-General Javier Solana stated that NATO’s actions were intended to “avert a humanitarian catastrophe” and to “prevent more human suffering and more repression and violence against the civilian population of Kosovo.” The NATO bombings received global support from multiple UN members, including the United States, the United Kingdom, France, and Germany, which clearly articulated that the “urgent humanitarian considerations and a desire to support the political aims of the international community justified the decision to employ military power.” In the case of Kosovo, the international community only employed humanitarian intervention in the case of Security Council resolutions. The escalation came once the international community realized Milosevic would refuse to comply with the resolutions calling on his government to cease its attacks against ethnic Albanians. Although humanitarianism was at the heart of the decision to conduct full-scale military operations, humanitarian intervention did not exist and the oxymoron of humanitarian war was just a euphemism for war itself. Gen. Wesley Clark, then the Supreme Allied Commander in Europe, stated later in his memoirs that, “Operation Allied Force was modern war—limited, carefully constrained in geography, scope, weaponry, and effects.” Once again, it is noted that humanitarian war is a construct of war that is waged for humanitarian purposes. Operation Allied Force highlights the failures of the international community with the impatience for humanitarian intervention by straying from the core humanitarian values through the employment of lethal solutions.

On March 19, 2011 as a part of Operation Odyssey Dawn, military forces from the United States, France, the United Kingdom, Canada, and Italy targeted and struck Muammar Gaddafi’s soldiers and air defenses. The airstrikes had come after repeated appeals from the UN Security Council to cease the Libyan regime’s crimes against humanity in Resolution 1973 and for Libyan authorities to comply with Resolution 1970, which requested that humanitarian aid be allowed to enter besieged towns. Prior to both resolutions, the international community observed in horror how Gaddafi became committed to crushing the civil uprising of his own citizens, which gained strength during the Arab Spring. Gaddafi spoke of the protesters as “cockroaches” and promised to “cleanse Libya house to house” and attack the residents of Benghazi with “no mercy,” which he later accomplished on March 20, 2011. The international community was outraged at the “indiscriminate and excessive use of force and lethal weapons against peaceful protesters, in violation of human rights and International Humanitarian Law.” Representatives from the Arab League, the African Union, the Organization of Islamic Conference, Iraq, Jordan, Morocco, Qatar, the United Arab Emirates, the European Union, and the United States convened in Paris for a summit to finalize plans for Operation Odyssey Dawn just a day after the Security Council passed Resolution 1973, authorizing a military intervention. There was already growing support from the international community to recognize the Interim Transitional National Council, which had declared itself on March 5, and it was apparent that Gaddafi had no intentions of ceasing military operations. Using R2P as a foundation for action, on March 19, coalition forces began airstrikes, and by the end of the month, had handed over control of the operation to NATO command and established a no-fly zone over Libya. In reflection of the intervention in Libya, Bellamy notes, “Debates about preventing and responding to mass atrocities are no longer primarily about whether to act, but how to act.” The international debate over Libya was initially about humanitarian intervention, but international action again devolved into humanitarian war, which in turn devolved into a more general war. The focus was once again on the immediate threat to human security and not the multifaceted approach of diplomacy, distribution of aid, use of nongovernmental and intergovernmental organizations’ support, and a peacekeeping mission. Ultimately, a belief in the effectiveness of humanitarian war begins with cynicism and impatience with humanitarianism and diplomacy.

What Place for Humanitarianism in War?

Although “humanitarian war” has a fundamental contradiction built into its very name, there are a few examples that act as counterpoints to this argument. Benjamin Banta offers a theory that examines the intersection of humanitarianism and war, which states essentially that humanitarian war may be seen as antithetical if war is just about the destruction of the enemy and humanitarianism is relief to victims. But instead, Banta suggests that “we might posit that humanitarianism can find a place within the tension at the heart of late-modern war—between a globalized politics and efforts to direct the logic of war through coherent policy.” In this theory, humanitarianism complements the plans for combat and acts as a stabilizing and structural force. President Ronald Reagan invoked a similar vein of thought when he stated:

The world’s democracies must enforce stricter standards of international conduct. Is this not a moral cause and a great undertaking as profound as the struggle against totalitarianism? What I propose then, is nothing less than a humanitarian velvet glove backed by a steel fist of military force.

One could argue that this type of approach to international conduct was effective in Libya, where Gaddafi was removed from power and humanitarian aid was eventually distributed, and in Kosovo, where the Milosevic government was forced to cease its genocidal behavior against ethnic Albanians. Although it is difficult to contend that humanitarianism and war are naturally harmonious, it is evident that in every humanitarian intervention operation that there will be some type of force involved and it is most effectively used on underlying problems that cause instability in a country. And in any case, those few cases where success can be argued to have been achieved should not underwrite a wholesale replacement of humanitarian intervention with humanitarian war.

Nathan Trimble currently serves as a battalion intelligence officer in 2BCT, 101st Airborne Division (AASLT). Prior to his current assignment, Nathan deployed to RC-East in support of Operation Enduring Freedom. He is currently pursuing a Master of Arts in International Relations and Contemporary War from King’s College London and holds a Bachelor of Arts degree in History from Vanderbilt University.