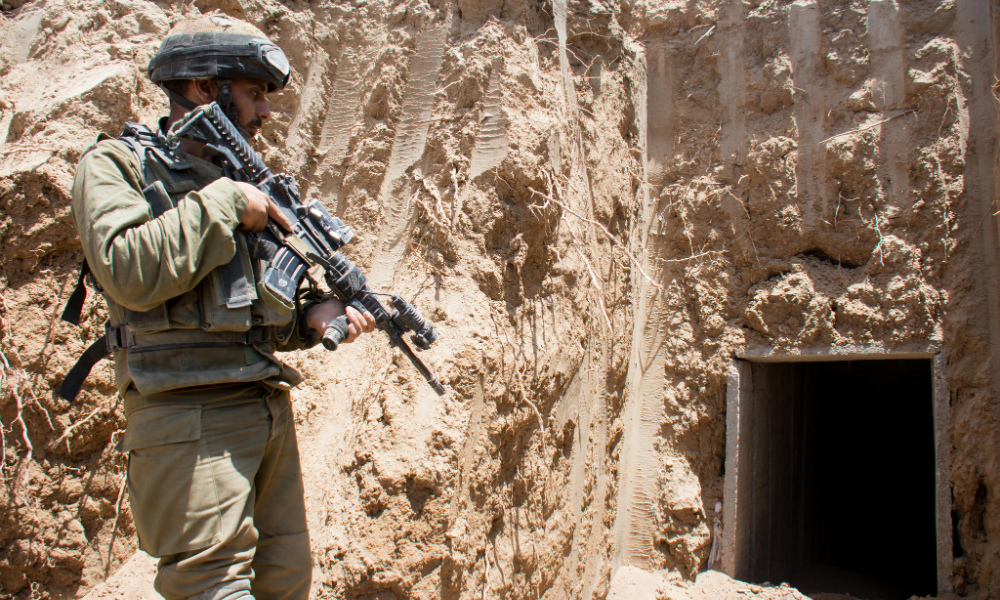 How should modern militaries adapt when they discover that their adversaries are literally tunneling beneath them? How does the pervasiveness of social media on the battlefield affect the way wars are fought? What impact will increasingly autonomous systems, 3-D printing, and cutting-edge off-the-shelf technology have on tomorrow’s battlefield? These were among the questions discussed by Brig. Gen. Nechemya Sokal, chief of staff of the Israel Defense Forces’ Technology Branch, at an event organized by the Modern War Institute (MWI) at West Point on November 29.

MWI Director Col. Liam Collins first asked Sokal about Israeli forces’ experiences with subterranean warfare. Tunnels have long been used for smuggling purposes in the region, Sokal said. Many of the buildings in Gaza are connected by these underground passageways. But tunnels have also been used for more offensive purposes: In 2006, IDF soldier Gilad Shalit was kidnapped by attackers who tunneled from Gaza into Israeli territory. Sokal pointed to an increase in the number of these infiltration tunnels encountered during the Israel–Gaza conflict in the summer of 2014. Because these tunnels were deep underground, were up to 1.5 miles long, and emerged in many cases near Israeli towns, Sokal described them as a new threat for which the IDF needed to find a solution.

Seeking that solution, however, has been incremental and evolutionary. The IDF first experimented with ground penetration radars. When the effectiveness of this tool was limited by the moist soil in the area surrounding Gaza, Israel introduced seismic technology to listen for subterranean activity—first using point sensors like microphones and later introducing fiber-optic line sensors. But the key, Sokal explained, is to create a data fusion from multiple technologies. Once detected, heavy machinery can be used to interdict tunnels from above and robots can be deployed to map tunnels from within, providing a degree of added protection to the soldiers that subsequently enter the tunnels. Many of these soldiers, according to Sokal, are part of a “special unit established mostly for this purpose, to develop the skills necessary to fight underground.” This combination of multi-faceted technological development, special training, and a commitment to evolving doctrine allows for rapid fielding of solutions to problems like tunneling, followed by constant tactical refinement and technological improvement.

Sokal said that the IDF sees great promise in a range of other emerging and improving technologies. While unmanned systems have been used to great effect for both surveillance and kinetic strikes, the IDF plans to introduce unmanned supply convoys in 2017. To illustrate the utility of such convoys on the battlefield, Sokal pointed to the speed with which armored forces can move across open terrain. Such rapid movement over distance leaves stretched supply lines that remain vulnerable in the yet-uncleared, open territory. Resupplying forward armored units with unmanned convoys thus limits the exposure of logistics troops.

New technologies can also reduce a military unit’s overall logistics footprint. The technology currently exists for IDF units to use 3-D printing to manufacture pieces of equipment, spare parts, and even food, calibrated to provide levels of calories, carbohydrates, and protein optimized for soldiers’ needs in combat. Much of this is already happening, but Sokal sees a future in which almost everything can be manufactured with 3-D printing technology.

Finally, Sokal explained how social media has impacted the IDF’s battlefield operations. Israel’s adversaries already use social media to great effect for propaganda and mobilization purposes. On the battlefield, “it’s already there and we can’t ignore it,” Sokal said. He went on to explain that the IDF’s approach is to “prepare soldiers to operate in an environment where social media is very dominant, in which everything is exposed.” So in exercises and training scenarios, soldiers experience the rapidity with which information from the battlefield can be broadcast worldwide.

Sokal’s comments on social media, in particular, resonated with cadets in the audience. As Cadet John Kneibel, a member of company E-1 and the class of 2017, explained, this is an issue each cadet will be forced to confront soon as leaders in the Army. “I know this is something I’ll have to deal with,” Kneibel said. With the sheer prevalence of technology and social media platforms on the battlefield, “tactical decisions have strategic implications.”