Iran’s Human Geography: The Wicked Problem of People, Places, and Things that Complicates US Strategy 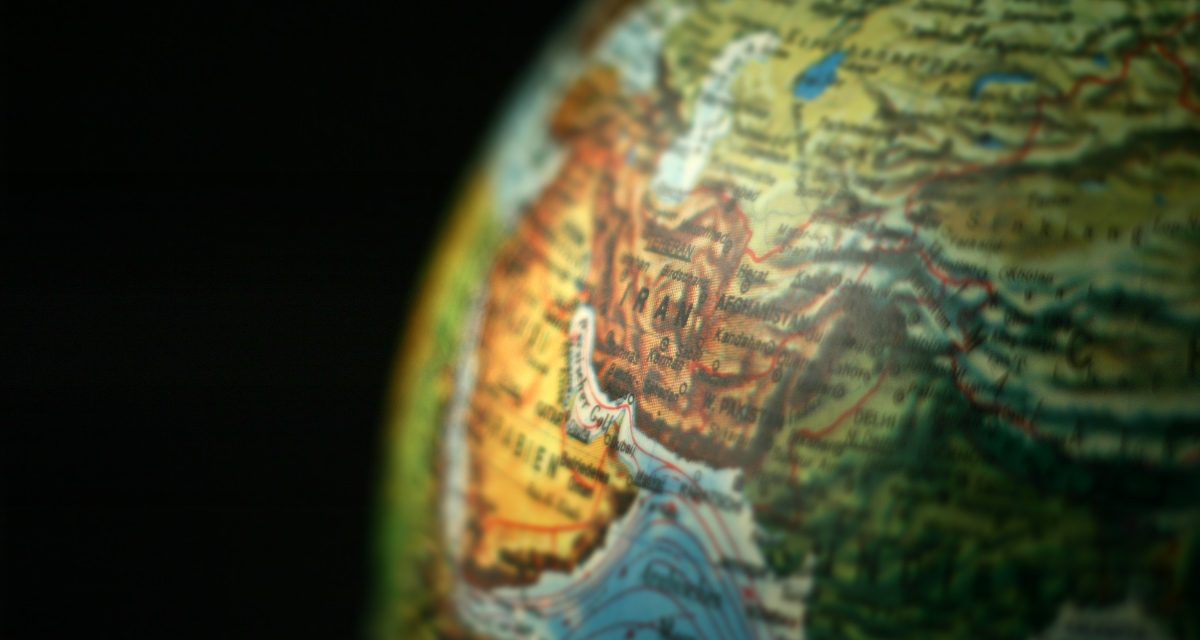 Joe Karle’s recent article regarding the need for the Department of Defense to get ahead of events and plan for a potential occupation of Iran generated a great deal of buzz. A lot of it, seemingly, from just reading the title. Karle’s article, however, provides an opening for a larger discussion regarding any potential military strategy for dealing with Iran. War with Iran, like a war on the Korean Peninsula against the DPRK, would be a campaign of catastrophe because both are human geography traps. Specifically the people, places, and things of Iran—and how they interact in time and space—combine to make war with that country a very difficult lift. When this is combined with some of the United States’ own human geography issues, successfully invading Iran, let alone eventually occupying it, is strategic folly.

In the case of Iran’s human geography it is important to start with places. As can be seen in the map below, Iran has collocated its known and suspected nuclear development facilities, as well as many of its military bases—air bases, air fields, and radar installations—near its major population centers, heritage and religious sites, sea and ground lines of commerce and communication, and borders with its neighbors. This is not, in itself, surprising. The same natural and manmade infrastructure necessary for a municipality is also necessary for military sites, and especially so for research and development sites. The ability to get personnel and supplies where they need to be in a timely manner means taking advantage of already existing infrastructure. However, access to infrastructure for logistics’ purposes is not the only reason for some of this co-location. For instance, the nuclear facility near Qom is not an accident. It was placed there in order to make it difficult for a US commander to approve a strike on it. Collateral damage from a strike that damages Qom is going to enrage Shi’a everywhere and reinforce support for the Iranian government. 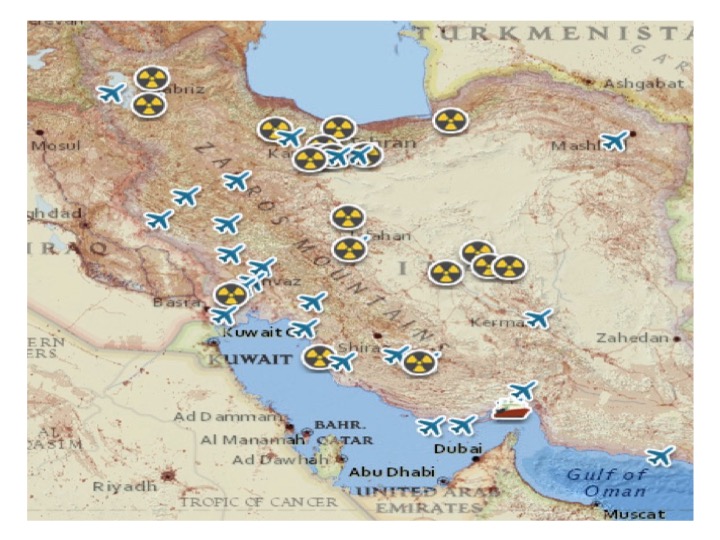 While the United States has the technological capability for precision air strikes, the tactical reality of where Iran has situated these facilities means that there will be significant collateral damage simply because of where they are located. And given the potential for environmental contamination from the degradation by bombardment of nuclear facilities, an air campaign to reduce Iran’s nuclear weapons development program would create the need for a significant humanitarian assistance, emergency management, and disaster response operation—which would have to be conducted among alongside offensive military operations and among a civilian population that has just been invaded and not favorably disposed to its declared liberators.

Iran’s places are also of significant concern in regard to Iran’s irregular and unconventional strategy to defend itself. This strategic combination of physical geography (places) and strategy (things) attempts to leverage Iran’s geography and its control over it in a mosaic defense. This includes the ability to project force to close the Straits of Hormuz and, as retired Army Gen. Barry McCaffrey pointed out in 2012, potentially sink a US aircraft carrier in the Persian Gulf, as well as to pull as much of the Iranian population as possible out of the cities and into the mountains in order to create civilian cadres to conduct a strategy that incorporates asymmetric, irregular, and unconventional warfare against the United States. Iran’s strategy is one of attrition that seeks to leverage the human geography of Iran to bog the US military down and inflict high casualties as quickly as possible in order to destroy support for the war in the United States and severely damage the morale of the troops fighting it on the ground.

The people portion of Iran’s human geography is also not conducive to American success. While Iranians may not always be happy with the aging revolutionary state and society that came into being in the 1979 revolution, there does not appear to be widespread support for replacing it. Or, at least, with making wholesale changes to it. The University of Maryland’s Center for International and Security Studies conducted public polling prior to the 2016 Iranian elections. The results indicated that nearly 80 percent of Iranians had favorable views of Iranian President Hassan Rouhani and Foreign Minister Mohammad Javad Zarif, with approximately 60 percent supporting the reelection of Rouhani. Moreover, only a “small minority complains that Iranians have too little freedom.” This is not fertile ground for popular support for a US attempt to liberate Iranians from their government. While the Mujahedin-e Khalq has spent a lot of its own money in Washington, DC and a number of EU member state capitals in the attempt to gain support for its claim to be both the legitimate Iranian opposition and the national council in exile, it is not very popular in Iran. Repeating one of the cardinal mistakes of the planning for Operation Iraqi Freedom—accepting the factually unrealistic assertions of the Iraqi National Congress regarding Iraqi attitudes to a potential invasion—should be avoided.

It is important to recognize that the United States has some of its own problems in regard to a potential successful invasion, let alone occupation, of Iran. First, for example, the US military does not have enough combat capability despite all of the money we spend each year. Second, as retired Air Force Lt. Gen. David Deptula has clearly described, the United States has an airpower problem. Specifically, the US Air Force and the aviation components of the Navy, Marines, and the Army have been at war for over twenty-five years without a break. As a result, while we have the most air combat experience of any air force or air component in history, the constant and continuous air operations since the early 1990s have eroded our ability to properly and effectively leverage this expertise. And third, the US Army notified Congress in March 2017 that it had a readiness problem. In 2018, we know what that problem looks like: being 12,000 recruits short for the first half of the year. The Army is also at least one conventional corps too light given that I Corps is allocated to the PACOM Area of Responsibility and III Corps and XVIII Airborne Corps have been rotating back and forth as the command element of Operation Inherent Resolve.

The US Marine Corps is also facing resourcing issues as it has no Marine expeditionary units to spare—they are all currently committed for existing training or operations. And the US Navy is also stretched. The three–carrier group show of force off the coast of the DPRK between November and December 2017 burned through an entire year’s worth of maintenance, training, and operational resources in a three-week period. Finally, Gen. Tony Thomas, commander of US Special Operations Command, has made it clear to Congress that he has no more special operations forces to spare.

And this is where the United States’ side of the human geography trap circles back to Karle’s argument about the need to plan for an occupation the way the Marshall Plan was conceptualized. Much of the military capabilities utilized to make the Marshall Plan successful were the result of leveraging civil affairs expertise to provide military support to government. Unfortunately, the farther the United States moved away from the Marshall Plan, the more this core competency of civil affairs was allowed to disappear. While there has been a fitful attempt to bring this capability back to the US Army civil affairs community with the creation of the 38G area of concentration—military government specialist—and the creation of a new Institute for Military Support to Governance akin to what was used to prepare civil affairs soldiers for their work in implementing the Marshall Plan, these efforts have, unfortunately, repeatedly stalled.

Right now the US military does not have personnel with deep specialization in conducting or overseeing the type of occupation that Karle argues is an unfortunate necessity of being prepared for all possibilities. It is also not clear who the United States would seek to empower as a legitimate alternative to the current Iranian government—both the popularly elected facade and the largely opaque theocracy that runs in the background. Or how the United States would go about doing so successfully. Karle is arguing that, no matter how inconceivable it might be, the Department of Defense must begin to plan now for how to not just achieve battlefield success, but also properly manage the post war termination transition in order to secure the peace. And while he is right to argue that having a plan and a strategy is always better than not having either, if the United States’ policy is to eliminate Iran’s nuclear weapons development program and remove the theocratic Iranian government, then United States policy is asking of strategy that which the strategy cannot provide: an achievable end state.

Adam L. Silverman is a consulting subject matter expert with Helios Global, Inc. He has served as a Senior Fellow at SOCOM’s Center for Special Operations Studies and Research (2015), a subject matter expert at the Office of the Secretary of Defense for Security Dialogue assigned to US Army Europe (2014), the Cultural Advisor at the US Army War College (2010–2014), and the Cultural Advisor, under temporary assigned control, at US Army Europe (December 2013–June 2014), III Corps (January–August 2012), and Civil Affairs Branch (October 2012–November 2013). He served as the Cultural Advisor to the 2nd Brigade Combat Team/1st Armored Division from October 2007 to November 2008 and was deployed with the BCT in Iraq in 2008 as the co-Team Leader and Field Social Scientist for Human Terrain Team Iraq 6.

The views expressed here are his own and do not necessarily reflect those of Helios Global, Inc, the Modern War Institute, the US Army, the Department of Defense, or the US Government.